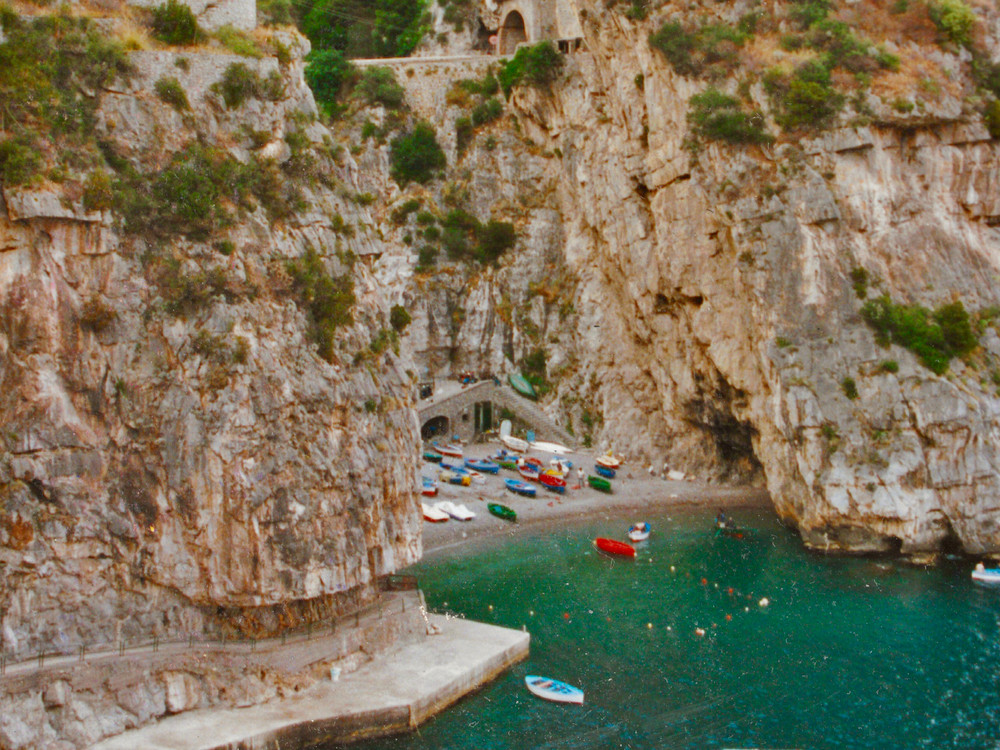 [PRAIANO, ITALY] — Two villages down from Positano is a small little hillside village called Praiano. Clinging between the cliff and the roadway, it is like a suburb of Positano — once removed, quiet and friendly. And zero tourists. What few hotels there are cheaper. It’s a great place to stay away from the touristy Positano. You can shoot in a cab, your car or take a water taxi that comes by fairly regularly.

Not that many people know the secret that is Praiano. Just 20 minutes around the corner from Positano, past the ritzy San Pietro hotel, is this little village, also perched on a hill. (Aren’t they all in Amalfi?) If you want to be close to the action in Positano but away from the crowds, this is your place.  Sitting on a far point that juts in front of Positano like a Roman Nose, it feels, and is, more like a fishing village. Sleepy. I like sleepy.  Even though there are a few hotels and rooms to rent, reasonably priced, it seems more like where people live, or have their summer villas vs. how Positano has shared itself so willingly with the rest of us.

I took these pictures to long ago, they were on film. You have to check out their website not to see what amazing improvements they’ve made over the years. http://www.hotelondaverde.it

Praiano, Italy. Google Map it and “Enhance! Enhance!” Just seeing it from space makes you want to go there.Not that many people know the secret that is Praiano. Just 20 minutes around the corner from Positano, past the ritzy San Pietro hotel, is this little village, also perched on a hill. (Aren’t they all in Amalfi?) If you want to be close to the action in Positano but away from the crowds, this is your place. Sitting on a far point that juts in front of Positano like a Roman Nose, it feels, and is, more like a fishing village. Sleepy. I like sleepy. Even though there are a few hotels and rooms to rent, reasonably priced, it seems more like where people live, or have their summer villas vs. how Positano has shared itself so willingly with the rest of us.

You can’t see the fisherman or the village bellow because in the early morning, all you can see is sun. I like that. This is the most vertical hotel I’ve ever seen, rooms stacked one on top of the other all up and down the cliffs, with interconnecting steps that look like that M.C.Escher drawing. What this verticality does is ensures that you have IMAX calibre seating of the Sunrise, the Sun and the Sunset. All Day Sun. Oh, and don’t forget The Moon, it’s included. And so are the kids and fishermen playing and working in the little fishing village below.

Fishing is ever-present here. There’s a cute little grotto of a harbor with colorful bouncing wood boats and you can watch the fishermen head out each night, often singing and, of course, chatting verbosely, with big huge glass orbs dangling off the back of their boats. As it gets dark, you can see and hear them off in the distance, those orbs now lit up like mini 7-11s, dotting the horizon; Squid are suckers for the light, with their curious suckers eventually being their downfall. Now transformed, as Lunch. Ever since I saw that white house up there on the cliff, I’ve wanted to one day own it, sipping a cappuccino to greet every sunrise.

Okay, so you gotta google hotelondaverde.it Hotel Onda Verde. I don’t have many pictures of this perfect little hotel, well, because it is built on a steep cliff and you can only see Out, or down at your feet. Like a blind man and an elephant, you can never picture the whole thing at once. But the pictures they have are perfect. Anyway, go google it and then come back and I can continue my story…. go ahead, I’ll be right here. Okay, welcome back: See what I mean? The location of this place in Praiano is just perfect. When I was there, the sweet young couple that owned it (she was Swedish, I think) were just building this place up. The luggage, they had to lower by a cable wire down the hill and they were just hand-carving a skinny elevator out of the dense granite cliffs. It was Spartan then, with white plastic chairs, a frigobar behind the front desk and they handed out ice cubes like they were manhole covers . NOW look at it! So impressive. Gorgeous decoration. The Perfect Little Hotel. I just sent some friends there last year and they loved it. Go. Hurry.

Just steps below Hotel Onda Verde is one of the best meals I’ve ever had at Il Pirata. It was just featured on the cover of Travel & Leisure a couple years ago.

Compare this lousy picture to the shots on their website. Night and Day. They have really continued to upgrade the property over the years, adding stars as they go along. Look at the difference now.

This is how they used to get your luggage down the steep steps. But they have made so many improvements over the years, it’s like a completely different place.

Just sitting in your room, you get into the rhythms and cycles of being a fisherman, all right below your window.

The rooms are spartan, but clean. Nice tile to walk barefoot and leave the doors open for a week.

UPDATE:  I just noticed in 2017 that the name has change to Villa Corallium.  Not sure if it has new owners or not. Here are two great pictures from their website: The Onda Verde is a fantastic little place of just a handful of rooms. It books up quickly — I’ve tried to get in a half-dozen times and they were always booked. A lot of regulars and a lot of Europeans come here. When I was last there, they had a tiny little cable car for your luggage that they sent down…then you walked the 60 or steep steps down. They since bored an elevator into the granite cliffs — a feat that rivals the Gotthard Tunnel…but just for a teeny elevator. Each time I check back, they seem to have made even more improvements.

I believe I had room 7, it was perfect. Spartan, but spotless. It overlooks a tiny little fishing village, a real one, with guys mending nets and kids running all over the place. A cool little cove to watch while you’re having a cocktail. I left the doors open all night, you can hear the octopus fisherman heading out at night, rowing their boats, whistling, and you can watch them out in the bay with huge bright lights that attract the little appetizers to the surface. The room faced south, so in the morning the bright sunlight streams in (early) and you wake up tocrashing waves, fishermen and happiness. It is a mellow little place. Fairly reasonable. Website

UPDATE: It’s been more than a dozen years since I’ve been to Onde Verde (You can tell by my hair still being brown).  But my friends Rex and Charene from London were just there in June 2012 and reported back favorably. They agree: Spartan but spotless and a great deal and amazing views and the really nice owners. Here’s what Charene said:

“we recently stayed at Hotel Onda Verde in Praiano on the Amalfi Coast and absolutely loved it.  We stayed there 3 nights and, by the time we left, we felt like we were leaving family.  Everyone was so friendly.  In fact, we pretty much loved everything about the Amalfi Coast.”

The awesome restaurant below the Onda Verde is such a killer find. Il Pirata. Incredible food, so fresh they bring in the fish from the boats over, the railings and into the kitchens. It was even featured on the cover of Travel & Leisure, which named it one of The World’s Most Amazing Restaurants With A View.. Here are some other sources of info:

A kinda lame Top 10 Things to Do list from TripAdvisor

A good resource in Praiano Online.