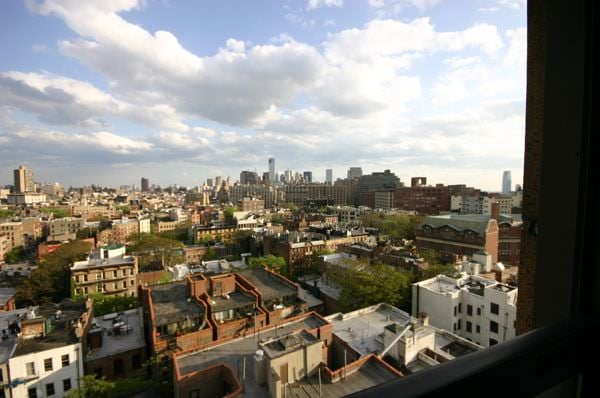 A WALK THROUGH THE WEST VILLAGE

(New York) — Probably wouldn’t have moved to New York if I hadn’t discovered this magical gem. I never could live in Midtown with all the tall buildings and concrete. Here it’s small buildings, tree-lined streets. I pop out of the subway and look down my street at sunset and see the glistening waters of the Hudson. All is good. It feels like a true village, uhhhh hence the name.Everyone here seems so different from the rest of the city; nice as can be. Mellow. No pretensions. No attitude. The asshole quotient goes up the further (or is it farther??) north you go in the city above 14th Street. But it’s nice to be in a city of 8 million people and when you go about your rounds on the weekend, everyone welcomes you back: “Hey, Dan. How ya coin’? The usual?”

Everywhere you go, everyone seem to be involved in something cool and creative: producers, writers, actors, designers….the overheard conversation at the next table always blows me away. Always seems to be some interview with someone going on at the next table, but I never know who they are. Here’s a handy map of all my favorite places. I also included some highlighted walking streets:

View YOU SHOULD GO HERE — NEW YORK in a larger map

Click here for an interactive map with addresses, websites, etc.

The streets are all twisty and baffling, with duplicate names with other streets (i.e. W 4th Street intersects with 10th, Bleecker goes north and south, but also east and west, and there are two Greeenwiches). Bring a map. Bleecker St and Hudson are the backbones of the neighborhood. Bleecker (north of Christopher) is loaded with all high-end designer shops and loaded with people… great for a stroll and to get out of the grey of Midtown. Duck into the movie-set side streets that shoot off in either direction, especially Perry St and Charles. W 4th runs parallel to Bleecker and is one of the coolest streets in NY. You should eat along here at any of the great restaurants — all of them are good. Avoid Christopher Street (porn shops and the River of Evil that streams off the PATH train and into the city) but start there and head north on Bleecker. Bleecker also heads south of Christopher, across 7th Ave, tben bends east into claustrophobic Greenwich Village and across the city. A good street to seek out is Bedford St, just off Christopher. Wonderful little street, with twisty diversion off each block that survive from before the city went to a grid system. There’s a picture on every corner, great restaurants. Quiet.