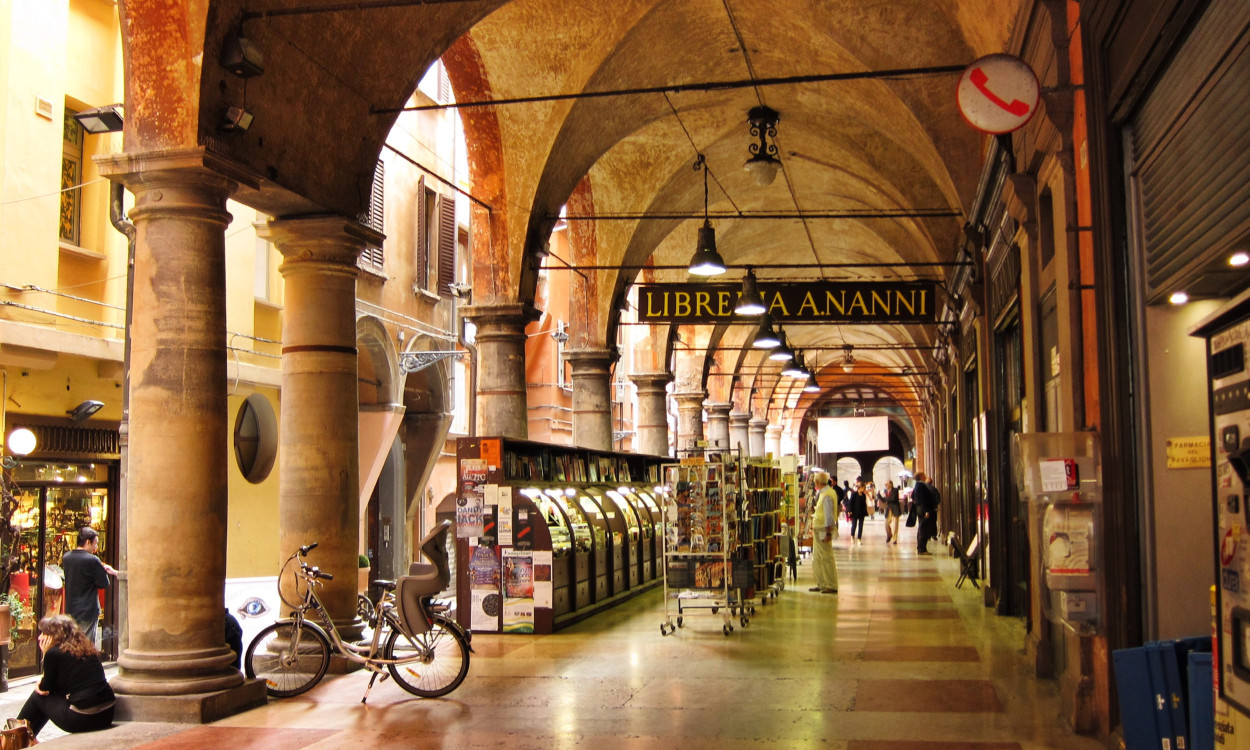 A city of reds, ochres, porticos and pork.

[BOLOGNA, ITALY]  — Bologna was about 237th on my list of places I wanted to visit, but when a Rome school buddy of mine suggested we meet there to eat, I jumped at the chance. Man oh man what a gorgeous city. Almost every block is covered with some sort of portico, centuries old.

I was there in October, so the warm autumn sunlight weighed heavy on all the nooks and crannies of the city. Each corner revealing some beautiful hue of red, with the perfect patina. You walk around the corner and BOOM, another amazing palette of colors.  And the reflected light gave off a glow that washed the whole city in red.

There’s reason why Italians have always called Bologna “La Rossa” (The Red One).

Bologna’s nickname is “La Rossa” (The Red One) because, well, it’s all red. Okay, moving on to our next lesson…

And I haven’t even begun to talk about the food. Here’s a great recap from NYTimes 36 Hour series. And a great guide for everything on Conde Nast Traveller’s UK site. And an even better one in the UK Conde Nast Traveller UK Site on a weekend away in Bologna.  The destinations in that UK version of CNT are just so much better than the usual pablum we get here in the states.

Ever been to Bologna? Man is it cool. Every shade of red and ochre you can ever image. It’s Ochre Heaven. And Portico Purgatory, with about every street an endless warren of porticos of every shape, arc and size lining every street. So get your rose colored glasses and prepare thyself for a lot of upcoming posts of reds and arches from La Rossa, The Red One.

Porticos are a big deal in Bologna, there are almost 40km of them that line nearly all the city centre streets and they are a part of daily life… as they have been for over 1,000 years. Which is why they are now a UNESCO Heritage thingy. They first started as a way for buildings to expand over public spaces, but really became mandatory to shield people from the sooty rains and whatever else might be falling from the sky in those days. Including the random defenestration. They still serve the same purpose today. Each block, each building has its own character and function. And almost all dripped in rich ochres and deep reds and knurled stone columns. They’re particularly useful if you don’t like using sunscreen. I find them very pleasing.

Next to Grand Place in Brussels, I think Bologna’s Piazza Maggiore is one the prettiest & perfect piazzas in Europe. After all those narrow streets, they needed to air the place out a bit, so they cleared out some towers and buildings in the 13th Century and made this. Also the perfect place for airing out all the ills and antics of students from Bologna’s famous university, the oldest in the world, which happen as regularly as the bell tower rings. Come, sit, have a cappuccino and watch the world go by.

Besides pictures of pools, I tend to like repetitive things. Like a cat to a can opener. Bikes are like Golden Retrievers, put them in any picture and they make it better.

I mean seriously, Bologna looks like Kim Jong-Il invented a Pigment Bomb and set it off high above the city. Drenching every wall in the most perfectly saturated colors. Ya just wanna go right up to every wall and roll your body all over it and flop down on a blank canvas and make a painting. 250€. I stopped dead in my tracks in this alley like it was a medieval Banksy. I wanted to chainsaw the whole wall out and put it in the living room.

The streets are so narrow and curvy in Bologna, buildings groaning for the sky, sunlight barely finds its way to the ground. It seems like they dug it into the ground vs. building ⬆️. Like a medieval Antelope Canyon, but probably carved with balsamico and Lambrusco, not water. You know, for the perfect patina…

The light in Bologna is just amazing. Sometimes just a shaft or sliver, other times bouncing off whole walls of red and bathing the whole street in a rosy glow. Like being in a James Turrell. In winter — which is ending now thank god — when I was there, the steep angle of the sun just makes the shadows and shafts of light even more intense. Bright light and deep dark, like cats and dogs, right alongside each other. Sometimes it was hard just to walk without bumping into something. I don’t think they invented the word “chiaroscuro” because of Caravaggio’s paintings, I think it was for walking in Bologna.

😎 I may or may not have taken out a couple of cafe tables walking towards this XFiles tractor beam light. 🎳

Like a lot of medieval Italian towns, Bologna had its own tower wars, with different families building these tall, skinny, side by side towers to taunt each other, shaking fists at each other 20 feet away — much like when Bono and 80s one hit wonder Bill Squier scrabbled over chimney smoke in the two towers on the San Remo years ago. At one time, this city looked like San Gimignano, with over forty of these towers poking out of the porticos. I left a surprise there for you…

Here’s a cool thing: I left a buried treasure in the tower. Look for this mark at 38 meters and then look for the hole to the right. Two friends have already found this in subsequent years. Shhhhhh, don’t tell anyone else….

…. at that stage look across the stairwell to find this little hidden, innocuous niche. I hid a Euro for you there back in 2012, knowing you’d be coming there soon. In theory it should still be there, just above eyesight. Take a picture and send it to me. Pass the story along to friends. I’ve sent two people there and they have found it. An Easter Egg for Easter.

The glow from all the red just makes you feel like you’re walking in a red fishtank.

Emilia-Romagna is arguably the capital of Italian food and Bologna is the capital of Emilia-Romagna. Ergo, these people know their food. And cooking food, talking about food and thinking about food is what a visit to Bologna is all about. It’s in their blood like red bleeds through their buildings. Probably why one study ranked Bologna the 🔝 of 107 Italian cities in quality of life. Must be the sauce. Let’s eat.

If I had a shoe store in Brooklyn, and had (or could even grow) a nice full beard and wore smart suits with no socks, I’d want a sign like this for my shop. Maybe add an Old Timey tagline like “A Casual Bootery” stenciled in the window, even serve a strong rye from Redhook to guests whilst perusing. Yeah, that’s the ticket. I’d make millions. Or at least get a slug in TimeOut, give away a lot of whisky and maybe sell a boot…

We came to Bologna to eat. I met a college buddy @timdwood54 from my Roma days — he with the unenviable task of saying goodbye to his beautiful wife and sweet kids. “Honey, I’m going to Bologna with Dan. To eat.” Silence. So that’s what we were here to do… you know, besides me taking 763 pictures of red porticos. We hadn’t seen each other for years, so that was as good as an excuse as any. As luck would have it, soon after arriving I got hit with the nastiest flu bug I’ve ever had. So of our three days, I spent 1 1/2 days with the Heroin Sweats in my hotel room, shades drawn. So I’ll be a little shy on restaurant recommendations. Such a shame. But this was my favorite meal that I actually did eat. Look at this puppy. Pumpkin stuffed homemade tortelloni, perfect for the October days we were there, with crispy pancetta and a balsamic reduction. All the best of Emilia-Romagna represented in a single dish. I was in The Fevers, so don’t remember the name or where it was, but it was in an alley and it was good. You should go there. I ate it twice in two days.

What I do best in Italy. Sit. Sit and drink it all in.

I mean, the whole city is like this. One gorgeous portico after another, each a different color of yummy. I bet it would suck to be an umbrella salesman in this town.

Woohoo! AFAR magazine is my absolute favorite travel mag, by far. I’m ☺️. Thank you @afarmedia ! And to everyone else who puts up with my incessant ramblings…

Cesari is a beautiful little jewel box of a restaurant in Bologna. Just looks like a perfect bottle of Aperol, sittin’ there all pretty. (The classic bottle, not the cheesy Aperol Spritz logo they foisted upon the world the last few years…great drink, stinky logo. Must have been the owner’s grandnephew who came up with that one…) Loved it. You should eat here.

Cesari is a beautiful little jewel box of a restaurant in Bologna. Just looks like a perfect bottle of Aperol, sittin’ there all pretty. (The classic bottle, not the cheesy Aperol Spritz logo they foisted upon the world the last few years…great drink, stinky logo. Must have been the owner’s grandnephew who came up with that one…) Loved it. You should eat here.

BOLOGNA from Dan Fogarty on Vimeo.