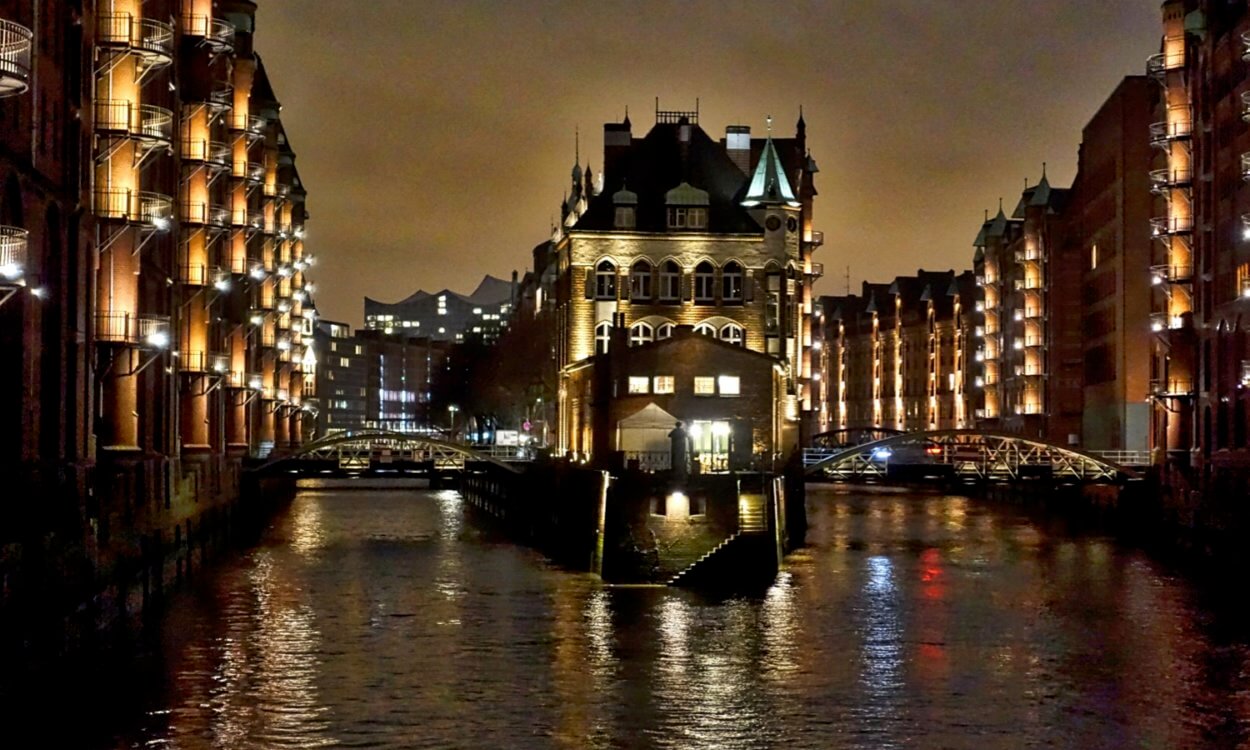 If you asked me a year ago if Hamburg was on my wishlist of cities to visit. “Ummmmm, no.”   But, I didn’t know.

I just thought Hamburg was just a big industrial port city in northern Germany. But through the marvels of Instagram, I kept seeing these beautiful shots of this remarkable city, Germany’s second largest and its major business hub, with all of its media, design and shipping headquarters here. Airbus, Unilever, broadcast networks, all here.

Like Berlin — which I covered in recent posts — Hamburg has been undergoing a huge Renaissance. Not just updating, but reinventing itself. With massive cool new developments and stunning architecture, sympathetically blending into to its prestigious older parts.

Ask a German about Hamburg and they go “Ooooooh, Hamburg. Such a beautiful city.”  It ranks 18th on the world’s most livable cities list. Well, over Christmas of 2017, this rube finally got a chance to see what others, obviously, seem to already know. Looking for a needed getaway over the holiday, I booked a last minute flight on Lufthansa, departing five days after I booked.

Take a look at this little video I made…and you’ll see:

Side note: the great direct flight from Denver to Munich flies the polar route, over the north of Canada. During the flight, the whole plane grew silent and suddenly everyone went to the left of the plane. A flight attendant came up to me and my earphones and excitedly said “Did you see? The Aurora Borealis!”  I can’t imagine how much the plane was listing to the left side of the plane as this was happening: 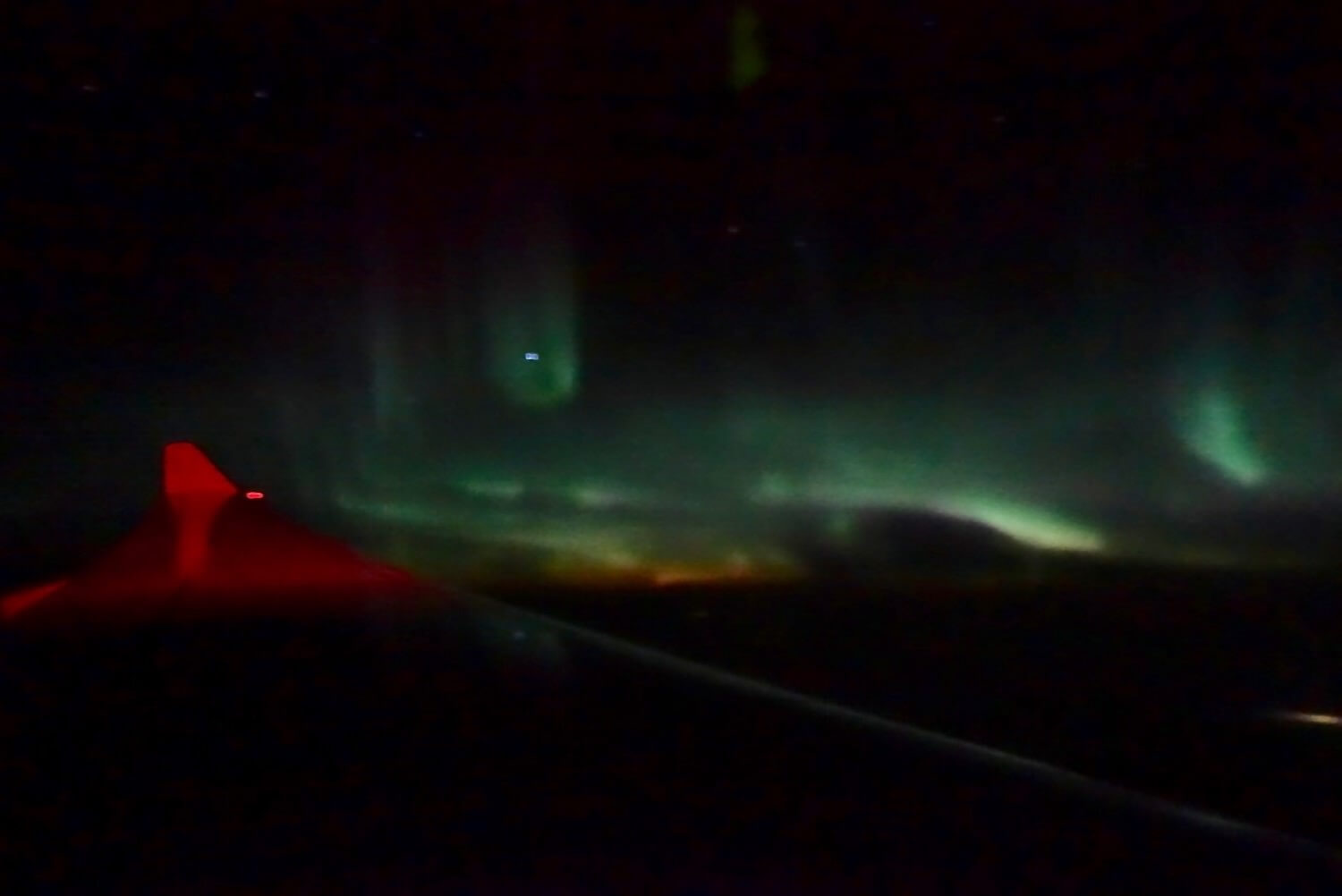 Hamburg — Venice of the North

There are many cities that claim “The Venice of….”  Hamburg is one of them. (Stockholm may argue.)  But Hamburg has over 2,500 bridges — more than London, Amsterdam and Venice, combined — and more than any city in the world. And it has more canals than Amsterdam and Venice, combined. Water is everywhere, in canals, lakes and rivers, and it calms the soul of this city of 1.7 million people. 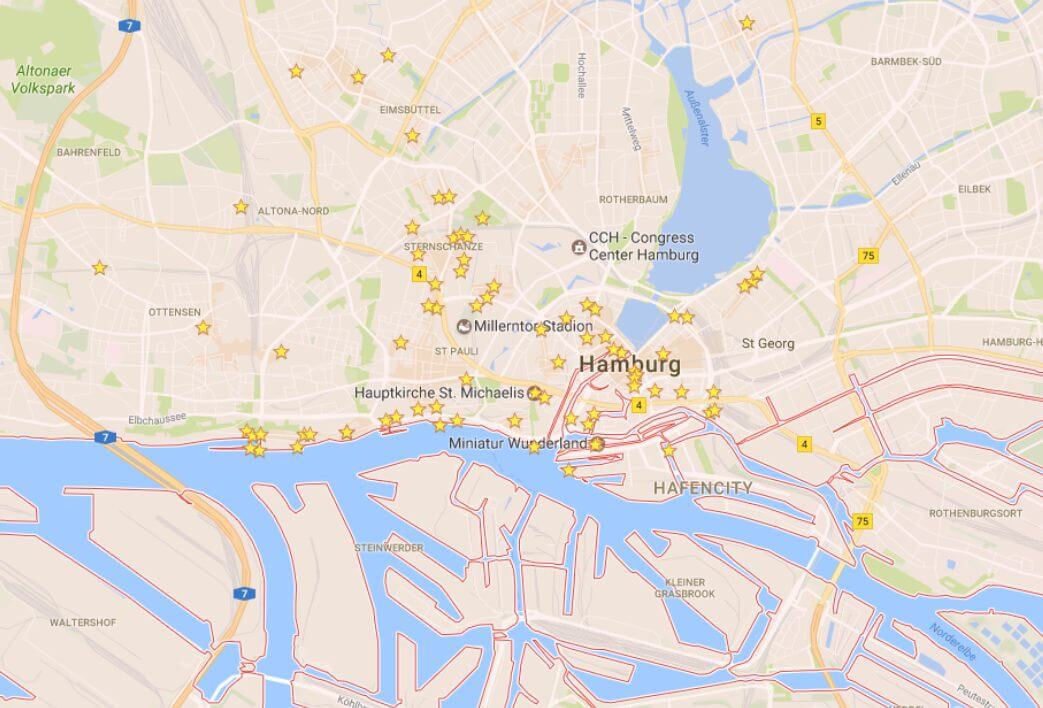 A lot of the city was bombed during WWII, including the great Hamburg firebombing that killed 50,000 people and a million people were displaced. I was expecting this city to be like Cologne, a nondescript 1950s/60s war rebuild, but much of the older parts of the city remain in their pristine state. 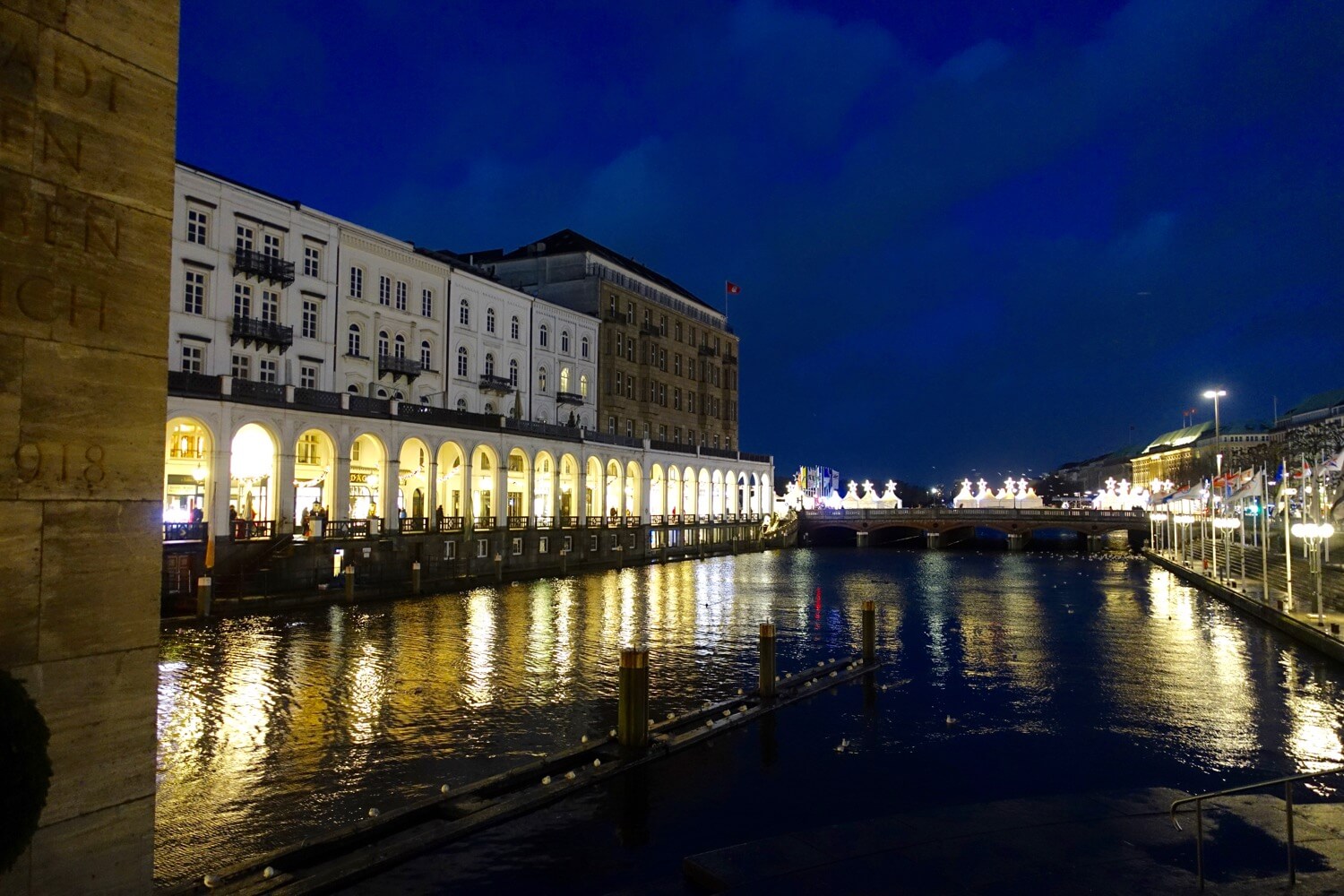 Early settlements in Hamburg go back to Bronze Era in the 9th Century BC. Now, it’s a bustling city built around its clean canals.

The River Elbe — The Lifeblood of Hamburg

When you hear of ports and harbors in most cities of the world, I usually steer away from them. But Hamburg embraces its harbor and nautical history, even building all its major attractions around it, like a grandstand. Offices. Residences. Museums. All unfold with a view over the River Elbe and all its commerce, ferries and busy boats. And boy, is it grand. I never thought a busy harbor, with cranes and dry-docks and marine construction could be so beautiful. But here, it is. The city’s heart beats with it. 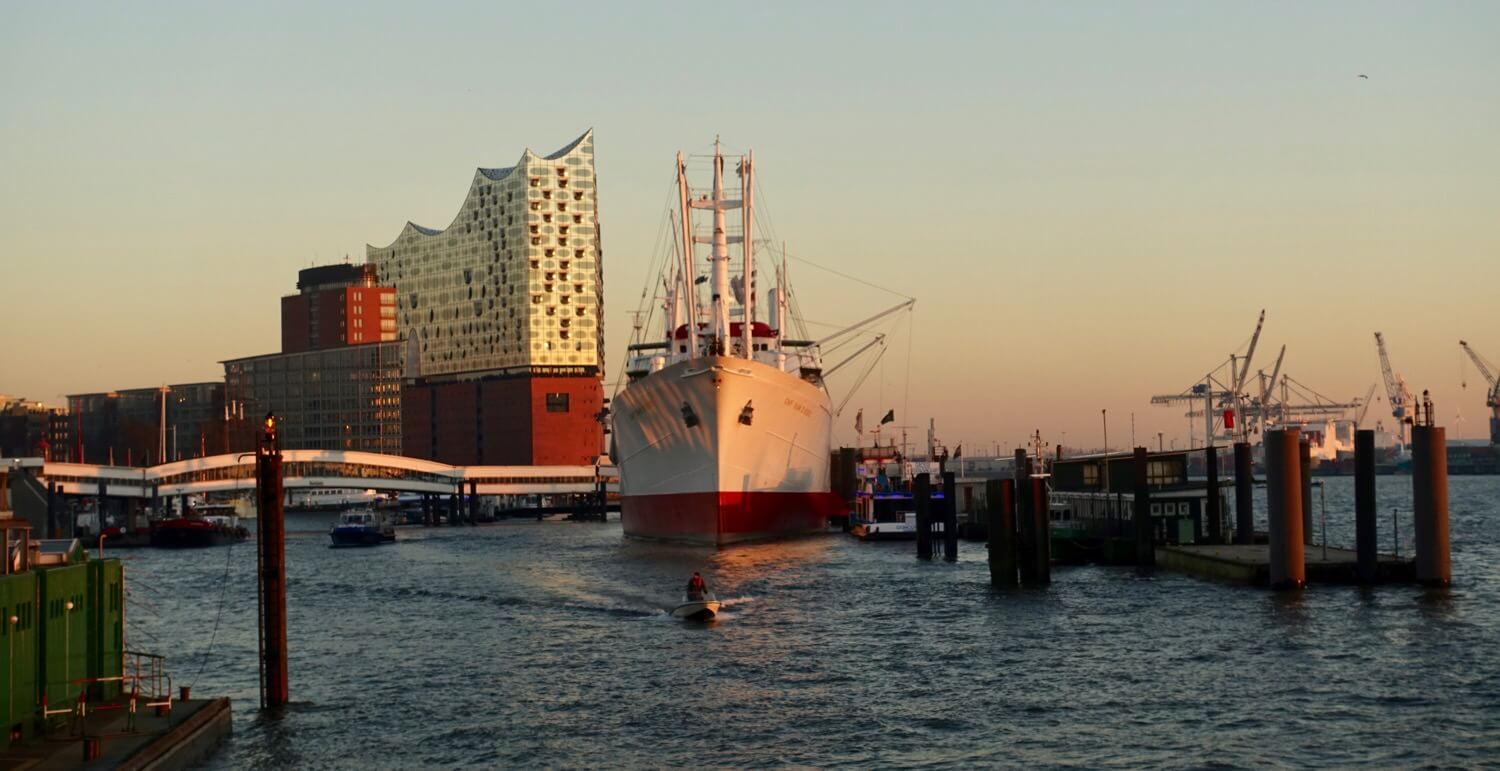 Most of the city is built around the River Elbe and its many attractions, including ferries and boat tours, celebrating its nautical past.

There is a string of great parks that line the hills above the city, offering great views over the massive docklands.

You’d never know if was 1C out today, the piers and tour boats were packed like sardines. 🍱 Everyone out enjoying this beautiful, clean city.

The architecture of Hamburg spans its rich history. From 12th and 13th Century Hanseatic churches to 1600s warehouses to stunning pre-war Art Deco to modern skyscrapers. No matter what fan of architecture you are, Hamburg has it. All seamlessly blending in together, not fighting. 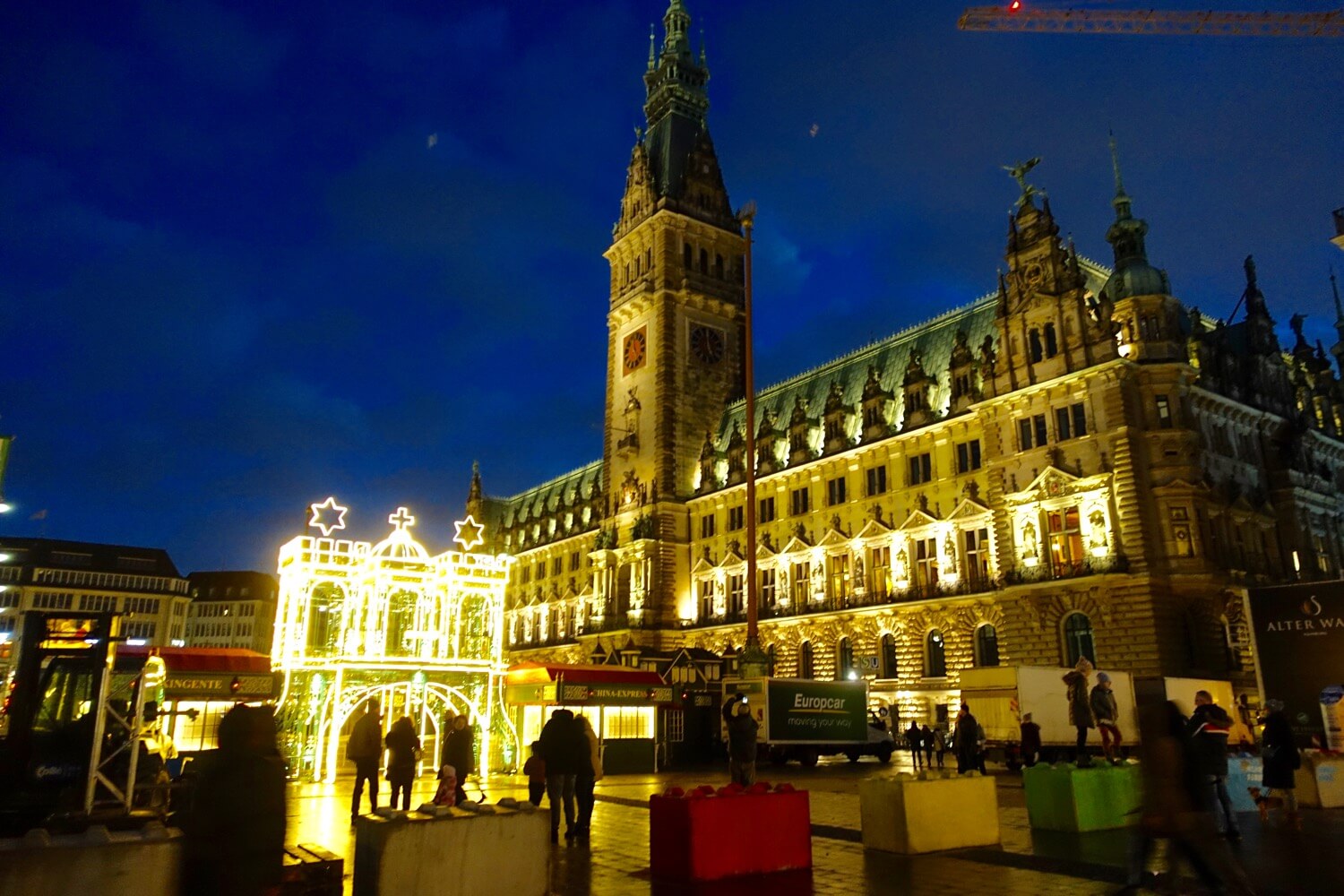 The Rathaus (City Hall) is the centerpiece of the old town. Just gorgeous at Christmas time. You can go up to the bell tower and get great views all over the city.

The Rathaus dominates the entire city center and is a central gathering place.

Hamburg is surrounded by water. Rivers, canals and these lakes, formed from damming the river Alster. You can take boat tours here, meandering up all the fancy mansions that line this lovely lake.

Just love it. Massive buildings all over the city.

Neuer Wall in the city center is loaded with shops and restaurants. Gorgeous buildings.

One cool WWII remnant all over Hamburg are the flack towers. Massive concrete bunkers that tower over the city, used to hold antiaircraft guns. Many still are around, turned into new structures like bars or this Mövenpick hotel.

Hamburg’s new Elbphilharmonie concert hall/hotel/condo building sticks out proud. Designed by my favorite architects Herzog & de Meuron, it sits on top of an old fortress of a brick warehouse. Probably was cheaper to build on top of it than tear that thick thing down.

The whole HafenCity redevelopment is one of the reasons I came to Hamburg, being an urban planning freak. Very cool how they wove it in with all the old warehouses and canals.
Really wanted to get a look inside the concert hall, but it officially opened the month after I was there. You’ll find some of the best architects in the world building here, including Rem Koolhaas and Renzo Piano.

You can go up to the viewing terrace and have a look ’round the city, which I didn’t do — too many persons. 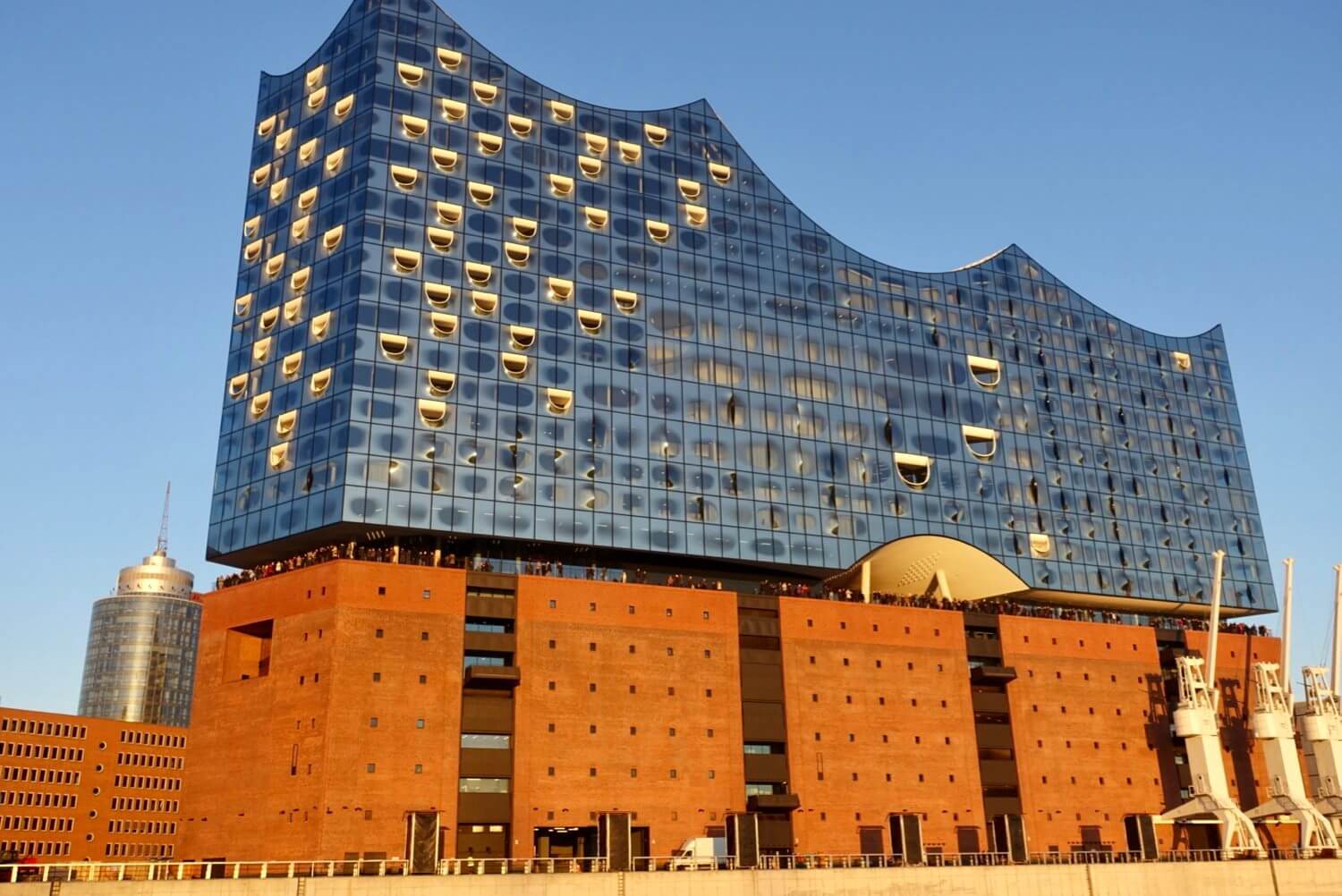 Just a stunning building. Built on top of a centuries old brick-shithouse of a warehouse. Must have been easier to build on top than have to take down all those old bricks… 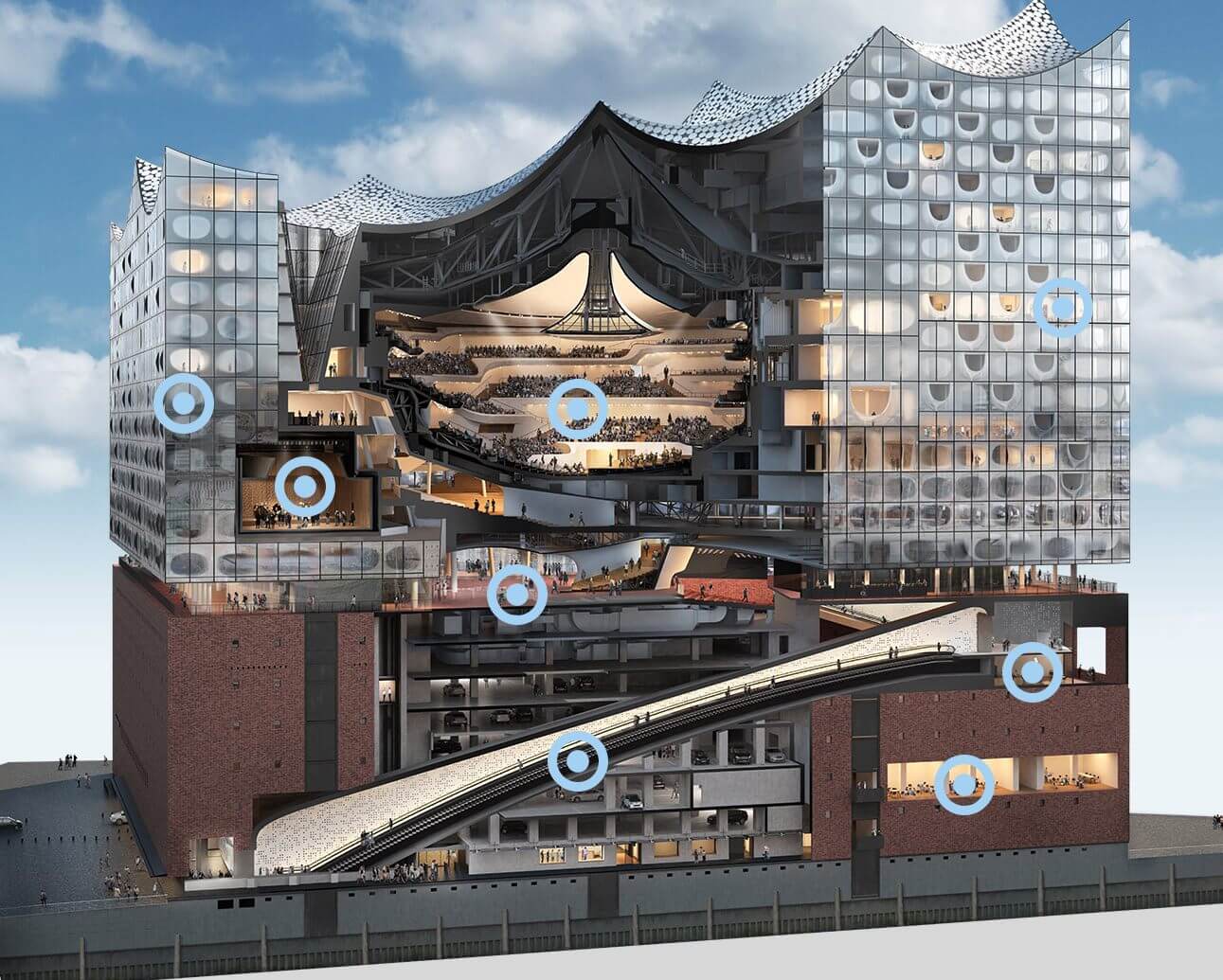 HafenCity is a brilliant, massive redevelopment project in Hamburg. They took decrepit old docklands and in-filled them with mixed-use offices, condos, retail, all built along the canals and waterfront. I could live here.

Cool how they built these condos out over the water, although I can imagine the lower ones get a little chilly in the winter.

All of Hamburg is so completely walkable.

This beautiful building says so much. It reflects the waves of Hamburg’s shipping past, reaching for the sky. There’s a whole state-of-the-art concert hall — supposed to be the best acoustics in the world — sandwiched by condos and a full-on hotel.

Just love the cranes. Reminds me of the Porto Madero section of new Buenos Aires.

The Speicherstadt — literally meaning “City of Warehouses” — was my favorite part of the city. And obviously everyone else that comes here. Truly stunning. Acres and acres of stout brick warehouses linked by a series of romantic canals. You can’t make up this industrial beauty. So good that it’s a UNESCO World Heritage Site, always what I seek out. 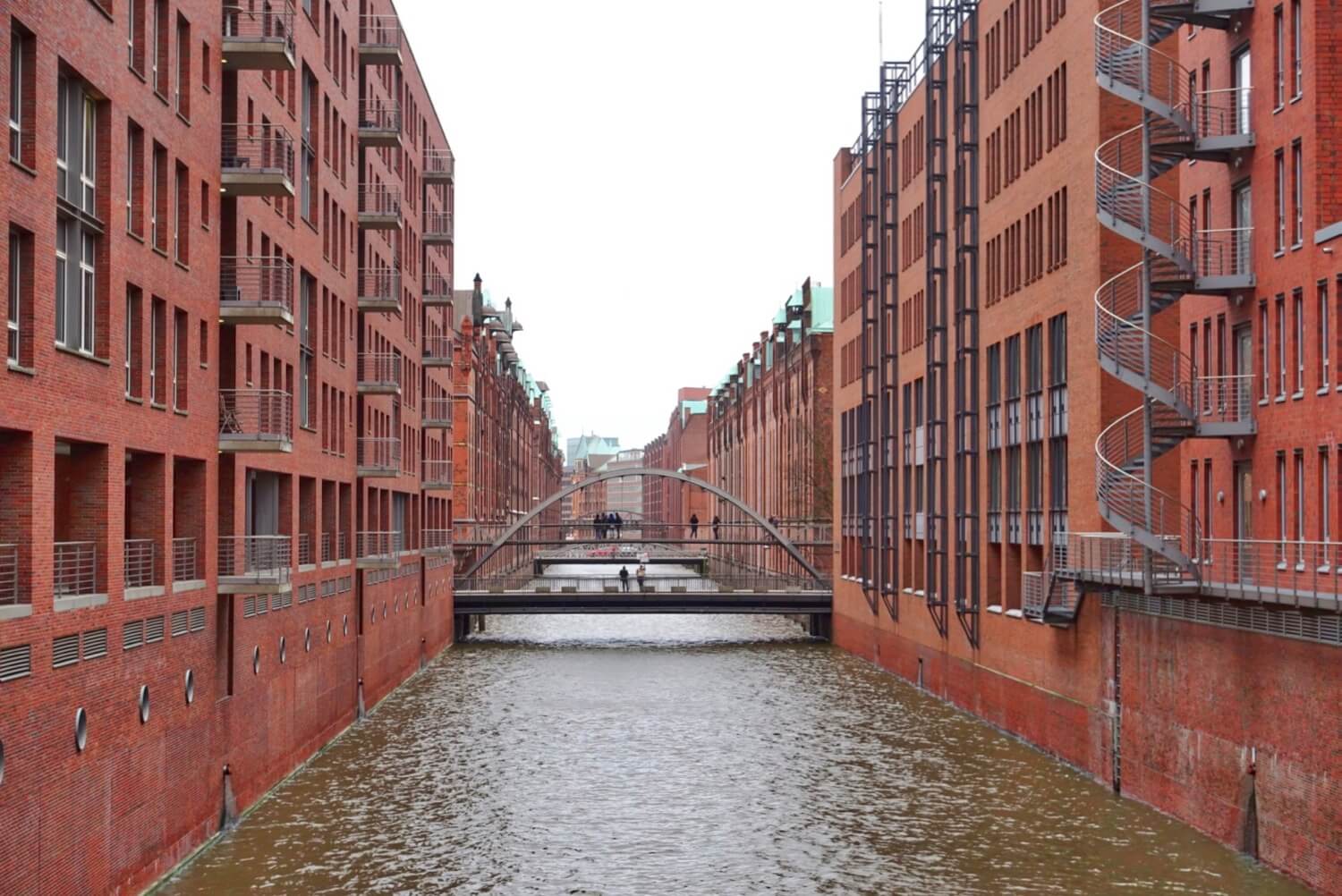 One of the top tourist destinations in Hamburg, Speicherstadt is a restored warehouse district surrounded by canals.

Endless bridges and connecting alleys make this a blast to just walk around and stumble on a nice cafe. I can only imagine how nice this is in the summer.

The Perfection of Chilehaus

Chilehaus was my favorite building in all over Hamburg. Built in 1924, it’s in the style of German “brick expressionism”, which I’d never heard of before, but now am a fan. This enormous block-by-block long building seems airy and light and took nearly five million bricks to build. I can’t even think about how many windows. It’s perfectly preserved and home to many design offices and shops. I kept coming back here. 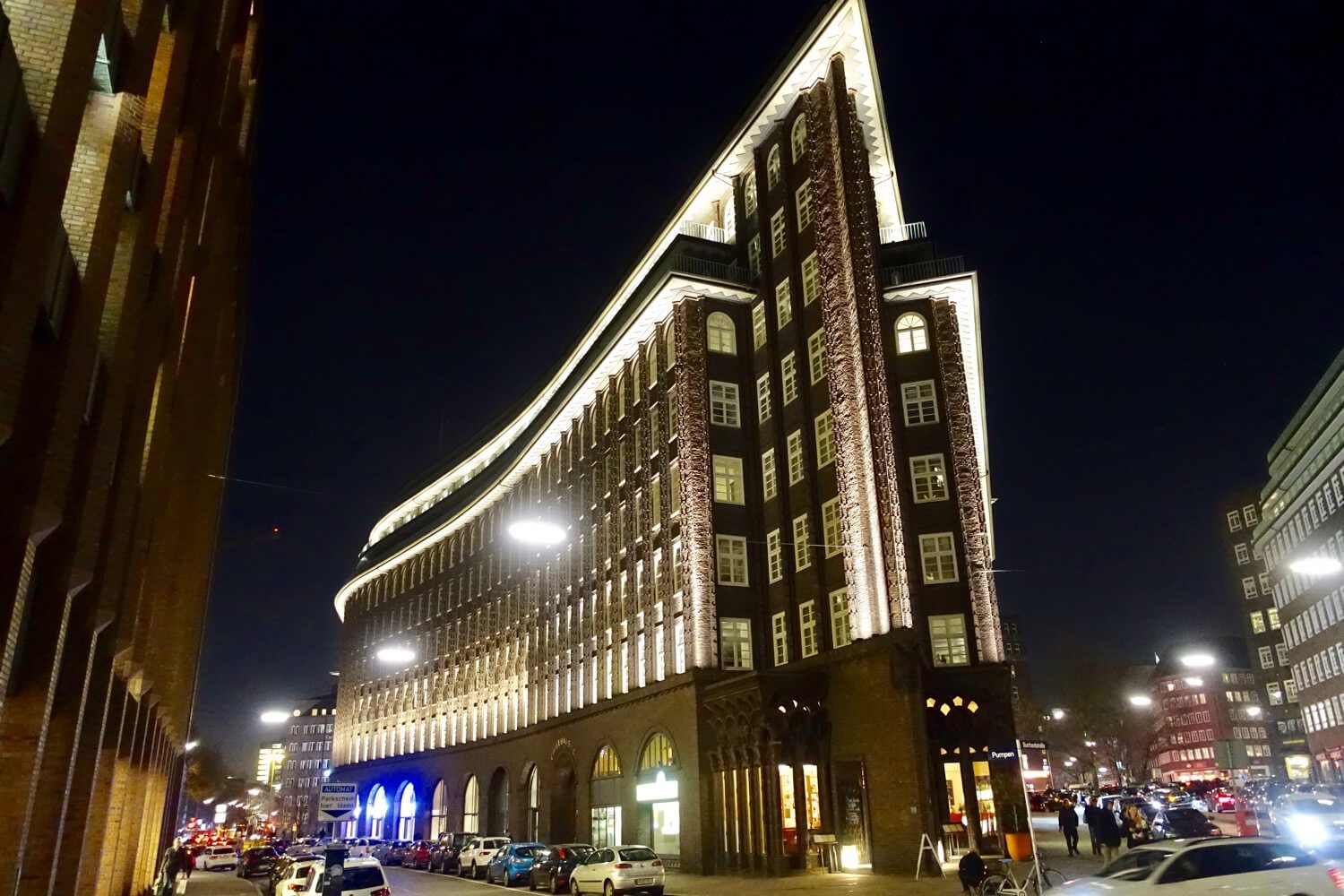 This was my favorite building so far. Chilehaus. Kept the brick makers busy in the 20s…

The inside of the building is just as good as the outside.

Hamburg — A City of Museums

Hamburg has some world-class museums, from ancient to modern. I love the Kunsthalle, which had a mixture of everything, in one glorious building. 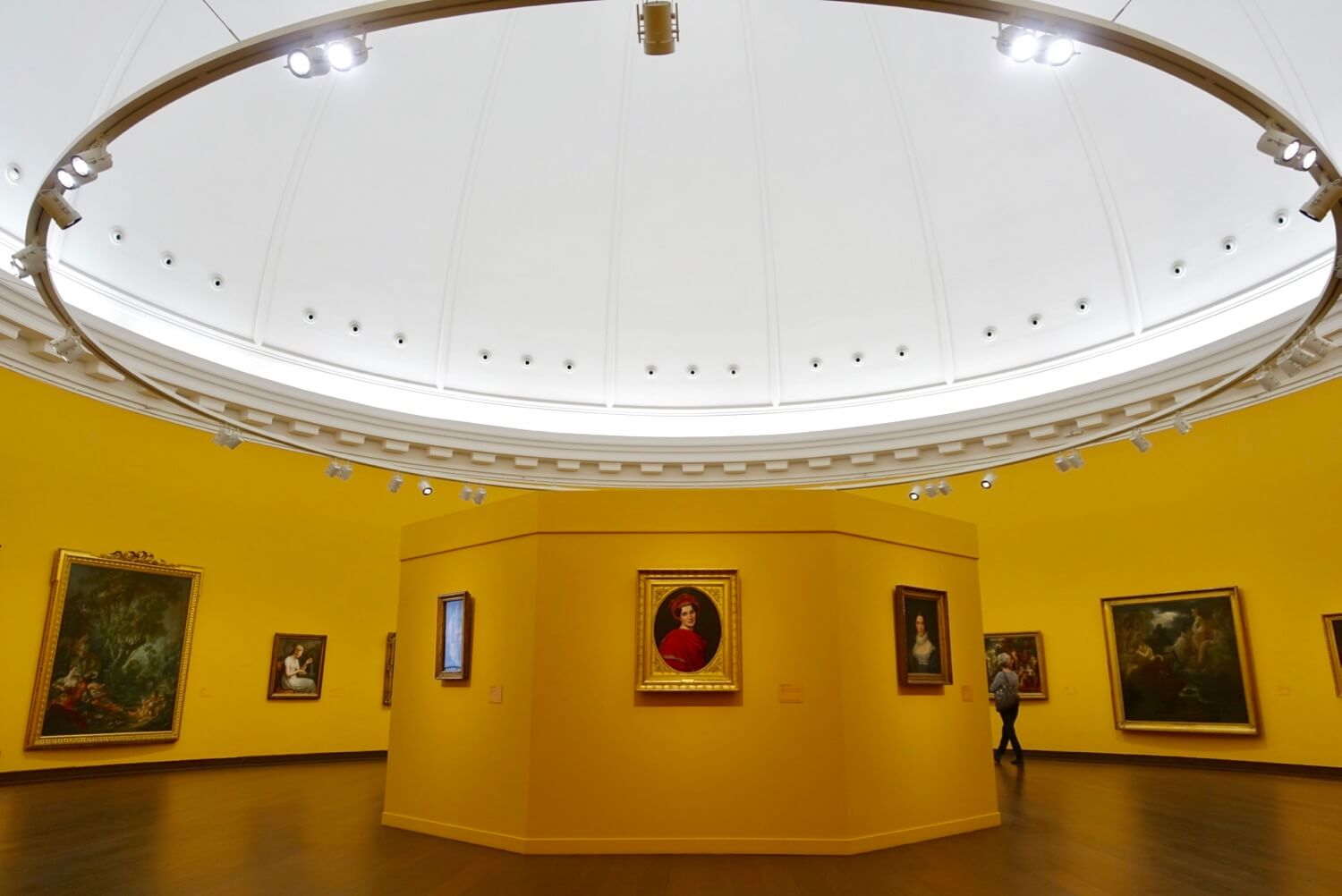 I love museums. Almost love museum buildings as much as the art. Really like how the Kunsthalle is organized, very informative. Been to a lot of museums but learned a lot here.

How dogs see themselves in the mirror.

The Kunsthalle Hamburg had some really great educational sections, really inventive ways to teach you how to really understand paintings.

The Kunsthalle Hamburg has it all, from old masters to the most contemporary art.

The Bibliotek is another cool building along the museum row.

The Deichtorhallen is another art complex, focused more on the most up to date art exhibitions. Depending on what’s there, it can be great or meh.

Here’s my interactive map, above.  You can save this link to your phone and use it whilst walking around. These are all the top recommend restaurants, retails stores, museums and other cool sites. https://goo.gl/maps/HCU5ctjWyXP2

Here is Conde Nast Traveller’s great guide to Hamburg. Rick Steve’s Hamburg guide, if you’re into that. A great Hamburg guide with lots of pictures from The Guardian.

A super good guide from Travel & Leisure on Hamburg. And from The Telegraph, a great overview of Hamburg. And the always dependable New York Times 36 Hours in Hamburg guide.

Here’s another fantastic guide, the Top Ten Cities in Germany from Bookmundi. Check it out.