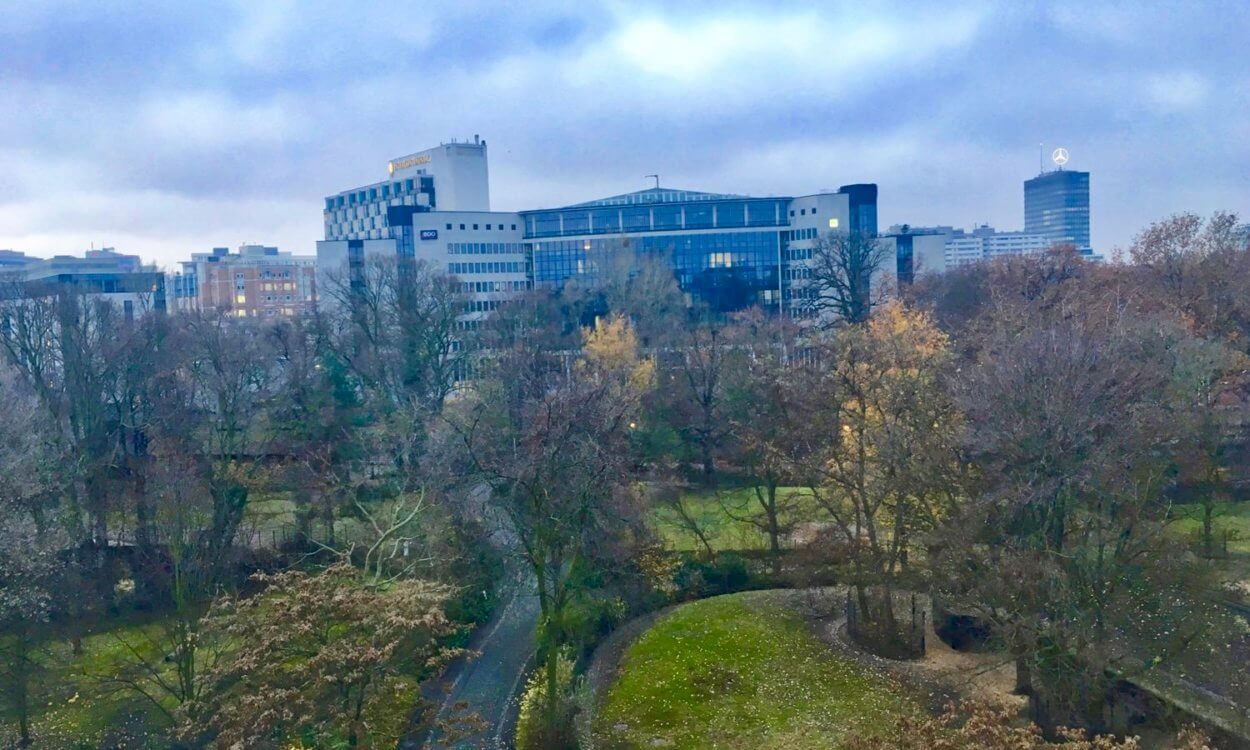 STAY IN A FORMER EMBASSY OVERLOOKING THE BERLIN ZOO

[BERLIN] — I’d been working like crazy for the last several months of last year and was itchin’ to go somewhere, like rightnow, over the American Thanksgiving holiday, a perfect time to slip away. Found a cheap flight on Lufthansa five days before leaving and scrambled to find a hotel.

I hadn’t had much time to investigate where to stay and scouring Tablet Hotels nearly everything was completely booked by smarter, more forward-thinking people.

What was going on in Berlin that weekend? Bank holiday? Everything was coming up goose eggs.

I’d been seeing great posts from my Instagram peeps about a cool boutique hotel called Das Stue — it claims to be Berlin’s first boutique hotel.

At first, there were no avails. But then I checked back again and rooms had suddenly opened up. I booked it on the spot, no time to think.

Set at the end of the quiet dark road near Tiergarten — Berlin’s enormous version of Central Park — amidst all the foreign embassies, Das Stue itself a former Danish embassy, with roomy rooms overlooking the Berlin Zoo, with seals moaning and emus strutting right below my window.

As the taxi wove its way down the dark streets, embassies sprouting on either side of the street with their little guard houses and flags from every nation. Smart and stately apartment buildings speckled in-between. You get to the end of dark street and there it stands, rather, hides. A beautiful 1930s arc of a building, its entrance lit like a warm, welcoming fire.

The first thing that hits you when you walk through the massive front doors is the crocodile head, staring straight at you. 🐊 Its sharp teeth ready to open your can of beer. Grand staircases line either side, like a Weimar movie set. But in stark contrast (as if the crocodile wasn’t) a modern constellation of lights hangs from the ceiling, like an undulating blanket. Yeah …. this is why I’m here… 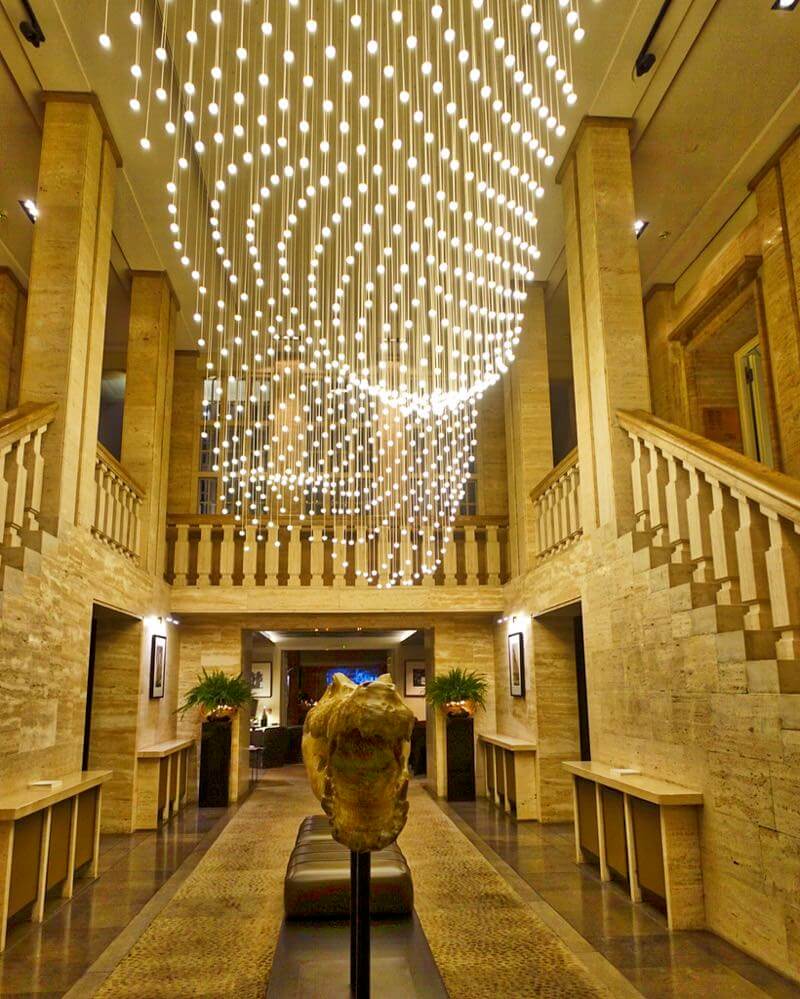 All throughout the hotel, there’s this wonderful mix of historic architecture mixed with modern design. Surprises around every corner. Ummmm… like a crocodile… in Berlin…

The Amazing Service at Das Stue

I had the greatest experience with the front desk/concierge person at Das Stue. Ruth. Beautiful and proper, straight from German Central Casting.

The first night I asked about a cool place/area to eat. I’d made a list on the plane from articles I’d collected over the years under my Berlin File. Every single one she mentioned was on my list. Perfect.

“Yah, I see what you like. I recommend this first.”

She sent me first to the greatest neighborhood — the old Jewish Quarter, with its cool massive and ornate brick industrial buildings and windy pedestrian streets, lined with design shops, creative haunts and a smattering of cool restaurants — just what I was looking for.

I found the restaurant I had on my wishlist, Cordobar, an amazing Austrian wine bar and gastropub I’d read about, on a quiet street, you can read about it in my other post on Berlin.

It gets better. The next night I went to look for her for another rec, but she was off that night. 😩

I approached the other concierge — all the front desk people double as your concierge ambassadors — and before I even got a question outta my mouth, “Hello, Mr. Fogarty. How may I help you?”  (I had never met this nice man before. That’s cool.)

As I was starting to say “I’d like to find a cool restaurant…”  he simultaneously pulled out a paper and said “Yes, sir. Ruth said you’d be back. She left this list for you and said that you would be back. She thought you would definitely like these places, the highlighted ones… [taptaptap]… they are all in the cool neighborhoods you would like. Which one do you think you’d like? I’ll book it for you.”

That’s not just great service. That’s like reading my mind.

The Decor at Das Stue

The rooms at Das Stue are about as well-designed and thought out as any I’ve seen. Perfect in every way and just the right amount of understated elegance. Not fluffy fancy. And nice sheets.

The best part was that they gave me a great room overlooking the zoo, so you can watch emus, kangaroos, a feisty guanaco right from your window and the seals give you a little wakeup call.

Das Stue means “living room” in Danish, the doorman told me upon arrival. “So we want you to feel comfortable in every way.” How perfect is that?

It has an ambassadorial flair, with a little Weimar thrown in, and the lobby is Travertine Heaven. But they recently remodeled, with cool boutique feel by hot Spanish architect Patricia Urquiola, updating it to the coolest standards, with a couple more notches above that, including a small Michelin star Spanish restaurant.

Just the people watching in the bar and restaurant is worth it….well, until I walk in and it’s like the record scratches and everyone stops and stares… 😳

The lobby art at Das Stue was very stare-able. Wish I got a better picture of the crocodile head 🐊that greets you when you walk in.

The shell of the building is this gorgeous 1930s style. Sleek. Travertine.

From the big airy travertine lobby, the reception area dips before opening back up to a very modern addition for the restaurant and bar in the back.

Woke up to cackling emus and shuffling kangaroos from my room overlooking the zoo.

This is literally what’s below your window from your room.

The rooms at Das Stue are about as well-designed and thought out as any I’ve seen. Perfect in every way and just the right amount of understated elegance. Not fluffy fancy.

The rooms aren’t huge, but so well-designed. And big enough to do Sun Salutations every morning, with seals balking from the windows.

The bathrooms are equally cool. Opening out into the bedroom.

All throughout the well designed room, sleek cabinetry hides nooks and crannies…

…that open up and have everything you need.

Even the elevators are cool and understated.

This picture of the hotel’s house car says loads about the entire hotel. (Besides it being my absolute dream car that you can’t even get in the States. An Audi RS6 Avant ). Notice the logo, small, discreet and tasteful, like Alicia Vikander, on the rear quarter panel, not some big brassy advert on the door or windows. Second, there is a super-stealthy race car hidden under the demure Audi wagon exterior. That’s 600+ of Daniel Craig horsepower hidden under that silky cashmere exterior; not bling-y or showy or crass, like Nic Cage. Super understated. And still gets 30mpg. Now, multiple that attitude by 109x on every other detail of the hotel and you’ll get what makes this place so cool. It’s the Christoph Waltz of hotels. (I’d pay to just sleep in the car!)

So ironic that this is my absolute dream car in the world. A premonition.

The Location of Das Stue

Here’s the location, right smack next to the Berlin Zoo. You can wake up to the sounds of quacking rare birds, hyenas and seals, right below your window.  They even have their own private entrance to the zoo, one of the world’s best. (I’m bummed that I was there during a rainy, cold winter weekend, so I didn’t get a chance to check it out.) 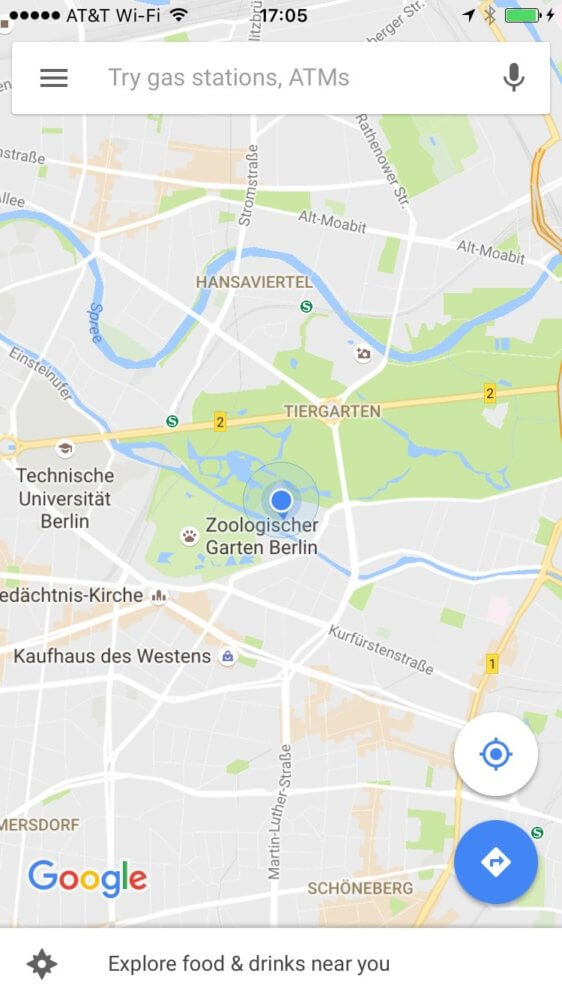 If you want to be in the thick of it, this isn’t where you want to stay. Mitte is the neighborhood for that. But if you want a quiet place to come home after traipsing all over Berlin’s cool neighborhoods, this is the place you want.

You walk home (or cabbage past) all the embassies and residences…staring through the fences at the countless embassy parties as you walk by on you way back. Beautiful Tiergarten is right across the street.

I’ve always had a thing for embassies; each with their own country’s feel to them, the fascinating security measures and an amazing variety of fencing options, just waiting for some sort of embassy-storming uproar…totally fascinating for a geegawker like me.

Berlin is booming. Everything cool is going on there right now. Here’s Conde Nast Traveller’s Where To Stay Guide.

And a great list from Travel & Leisure on Where to Stay in Berlin.

And the NYTimes 36 Hours in Berlin Guide.