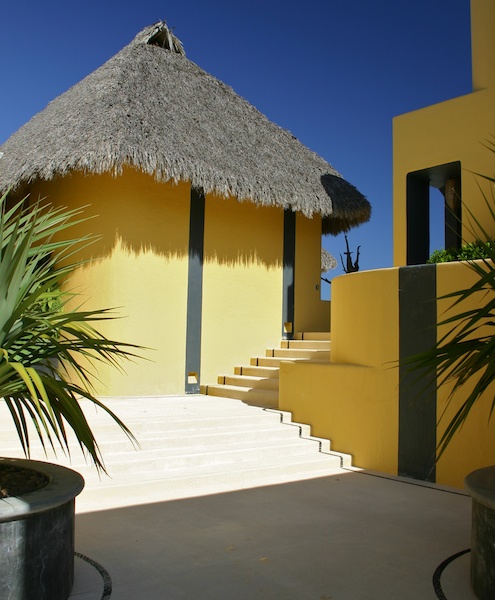 AN ECCENTRIC HILLTOP VILLA IN JALISCO

(Costa Careyes, Mexico) — High above a nearly deserted coastline, Costa Careyes is a remarkable compound of a couple dozen villas (each with their own architectural theme), casitas and small hotel. Owned by a one-eyed Italian count and designed by an Italian architect, this place looks like a bizarre movie set — think Planet of the Apes (in a good way) combined five star luxury and you get it. Really cool designs tucked into every square inch. Most of the living areas are outdoors, under thatched roofs and no windows. An incredible attentive staff looks after your every need. We stayed in Altiplano, but took a tour of several other of their properties, including a stunning rooftop house with a 180 degree pool that surrounds all the rooms…you can roll out of bed and right into the water. You’ve probably seen it in People and In-Style.  At the time we stayed there, Seal and Heidi Klum has a villa around the corner.

The whole development was eco-concious — and was built that way long before it was cool. They grow their own organic produce, purify their own water and have a turtle hatchery. Situated in Jalisco provence, along the Costalegre, two hours between Puerto Vallarta and Manzanillo, it is nicely isolated, with miles and miles of including coastline, with knock-out villas and mansions tacked along the cliffsides all up and down the coast. Great house-watching boat rides.  Here’s a great article from the NYTimes that sums it all up. You kinda feel like you’re inside a special world.

One of the separate room/houses in the Altiplano

The Oriental is an enormous villa, sitting on it's own mountaintop, with a pool that goes nearly completely around it

Almost all of the Oriental's rooms open right out onto the water, so you can literally roll out of bed….