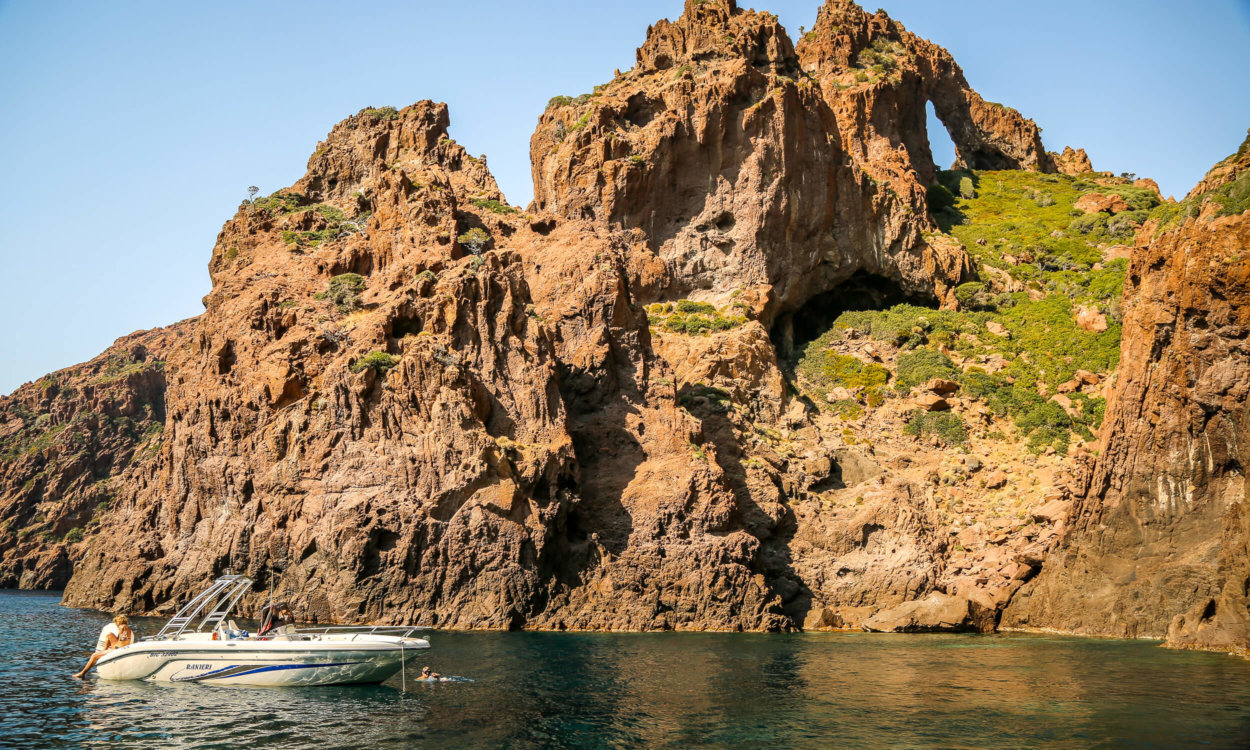 BOATING THROUGH THE JAGGED CLIFFS OF CORSICA’S SCANDOLA NATURE RESERVE

[SCANDOLA NATURE RESERVE, CORSICA] — Okay, who’s been to the Scandola Nature Reserve in Corsica? Non?  Strap in. You’re about to see something really amazing.

You gotta gotta go do this. A huge natural preserve in the northwest of Corsica, with the most dramatic rock formations, canyons and wildly shaped rocks you’ve ever seen, plunging right into the sea. Dwarfing everything in their midst, namely you.

It’s like being in a one-armed Grand Canyon, with the deep blue Mediterranean sea on the right side, and every color and shape of rock you’ve ever seen. 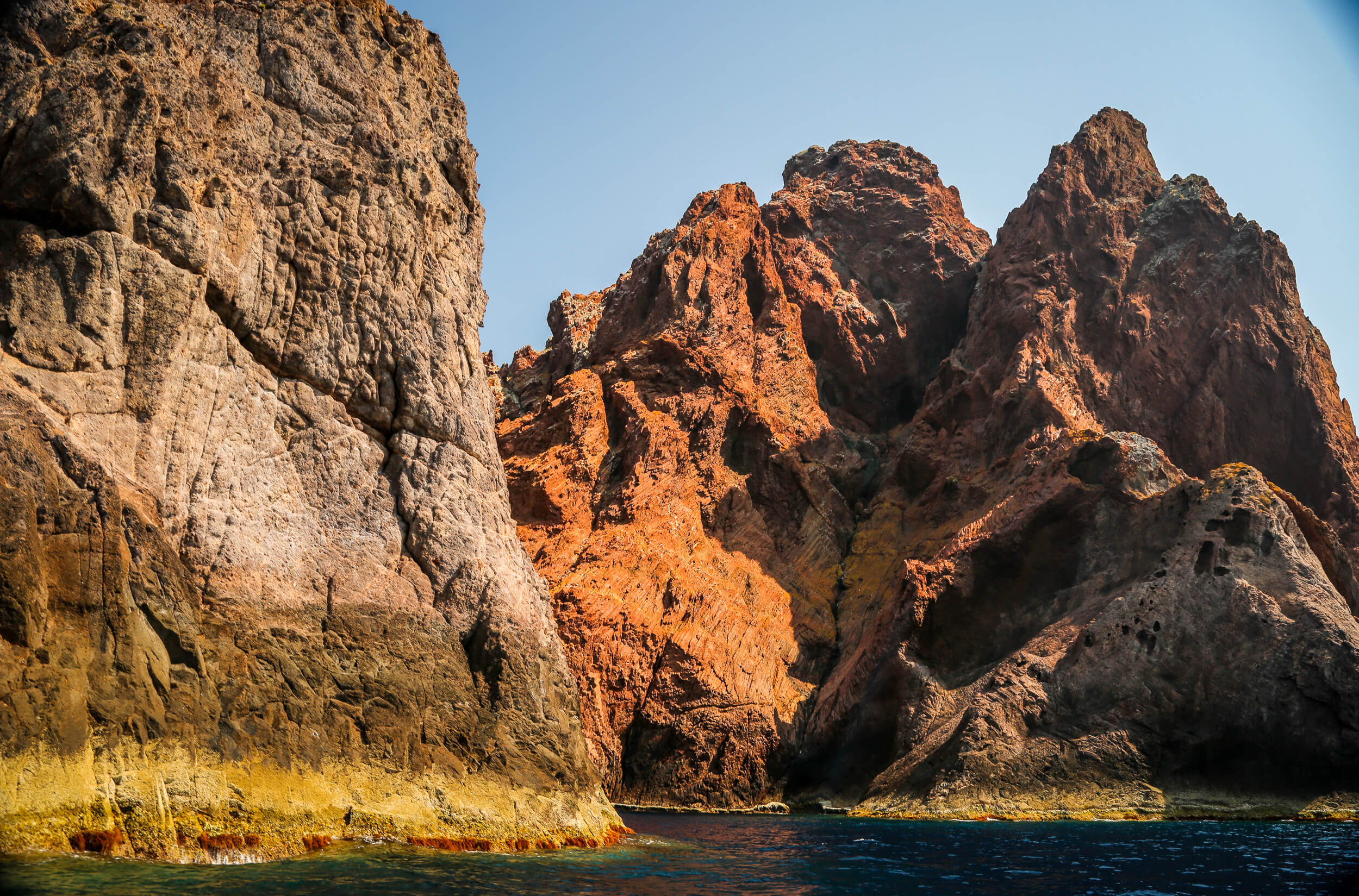 On the northwest corner of Corsica, you can really only see it from a boat, dramatic jagged cliffs of every shape and size and color, changing from cove to cove, none of them looking like the other one. You just bob along, ooh and ahhh, and just putt-putt along the inlets and hidden watered canyons. This place is so stunning, that’s why it’s a UNESCO World Heritage Site. Just amazing.

The thing to do is get on a boat. You really can only see this rocky spectacle from the water.

The thing to do is get on a boat. You really can only see this rocky spectacle from the water. You can take big or little tour boats out of the nearby harbors, at every size and price point. The bigger the boat, the cheaper, but you’re also going to be fighting with the hoards and selfie sticks to get a view. It’s one of those things where once you get to the Good Stuff, everyone races to one side of the boat, listing, cameras and phones ruining your view. 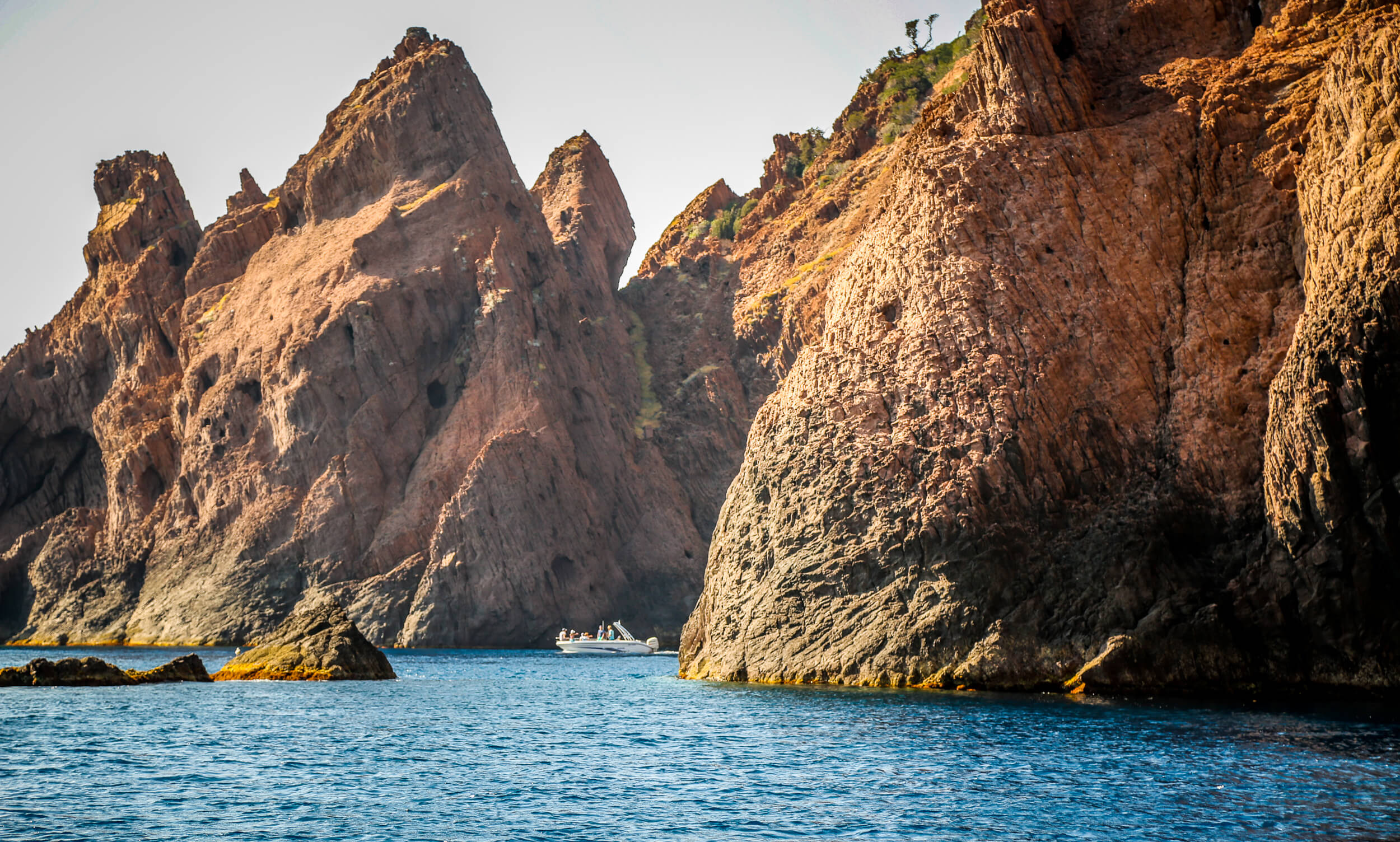 Or better, charter a skipper and a speedboat on your own from nearly every port from L’Île-Rousse, Calvi, Girolata and others. They can range from big old dualie-engine fast boats to little Zodiacs. Highly recommend splurging on your own boat because the skippers know all the cool spots and their smaller boats can really get into the innumerable nooks and crannies and colorful canyons and you can stop at your own pace. I debated chartering a boat for a day because it was just me and expensive for only one person, but it was worth every single penny. So glad I did it. 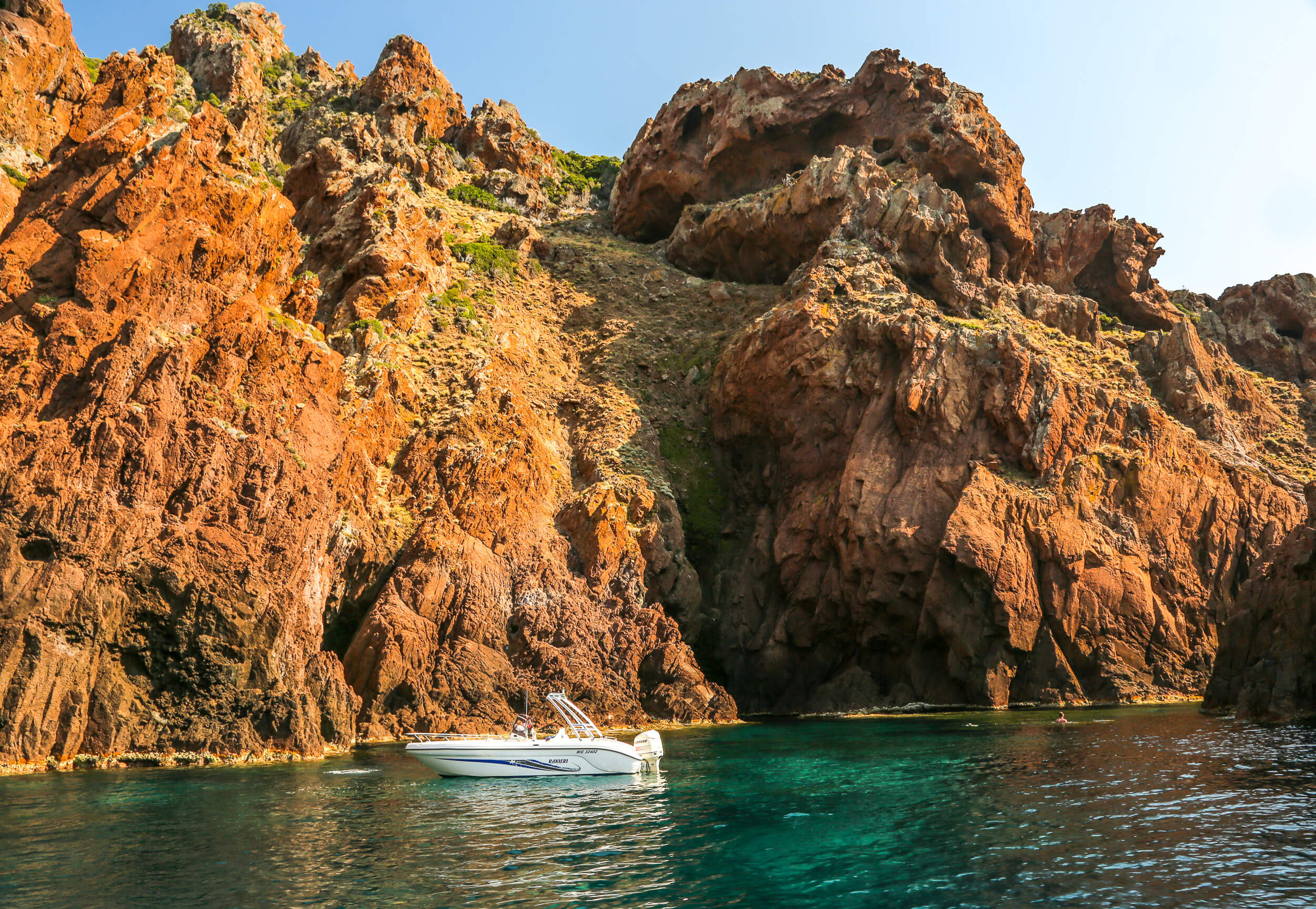 The colors of Scandola. 😳 This was the look for #SS15. If these colors clash with your outfit, just glide around the corner and it’s a whole ‘nother season.

This is one of the coolest places I’ve ever seen. So plunk down a bunch of Cent Euros and you will never regret it. I almost didn’t go, but afterwards I was like “How could I not have?”  One of the best investment decisions I’ve ever made.

Here’s what this peninsula nature reserve looks like, at the top left of Corsica: 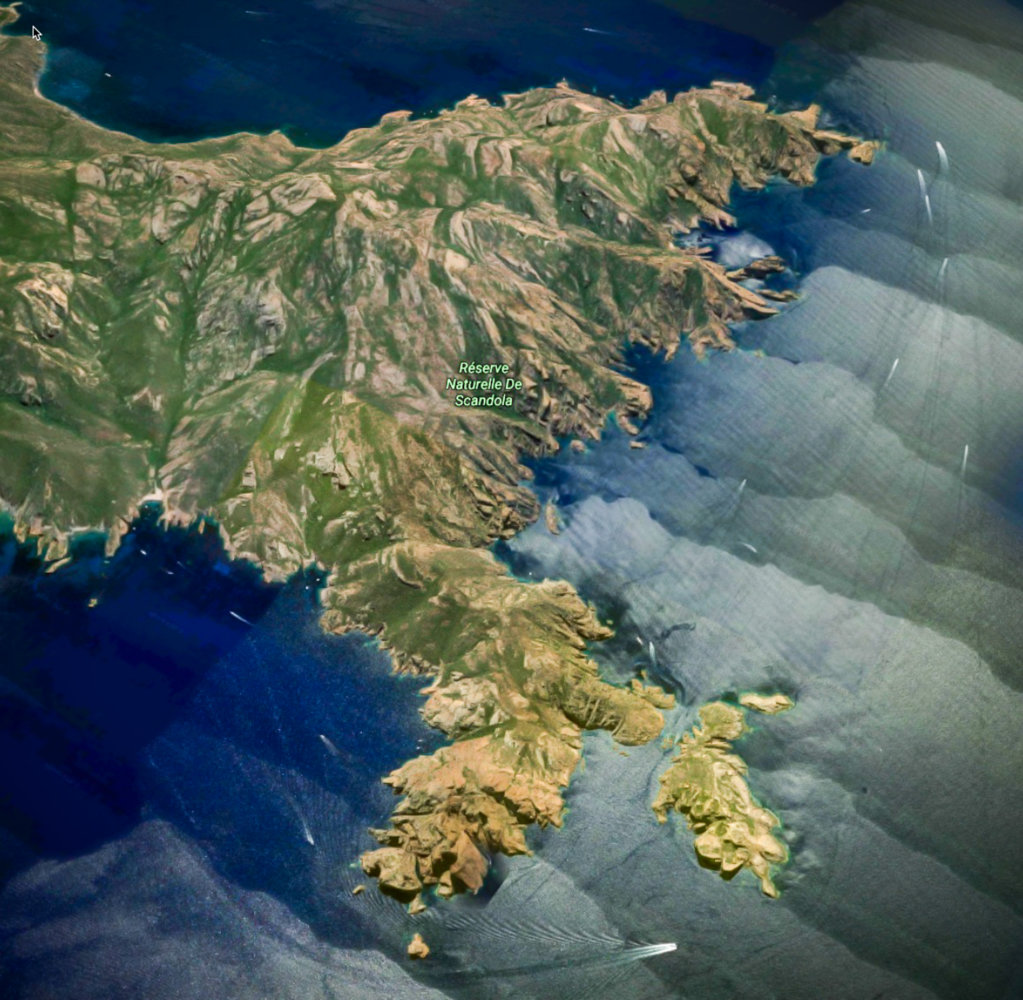 Here’s what the Scandola Nature Reserve looks like from the air.

You gotta watch this to get the full experience:

You go for at least a half-day, with the boats putt-putt-putting along the rock edges, into ridiculously colored flooded canyons. Bring a picnic and a beer. And your 👙 because you’re definitely gonna wanna take a schwimbob. Just ask your hotel who they recommend, they’re usually friends or family and they won’t recommend someone that isn’t good.

You can take the big tour boats and explore the same Scandola coast, but to get the max experience, charter your own captain and boat and they take you into places where the big boats can’t. Secret little slot canyons and chasms several hundred feet high and only a boat width wide. 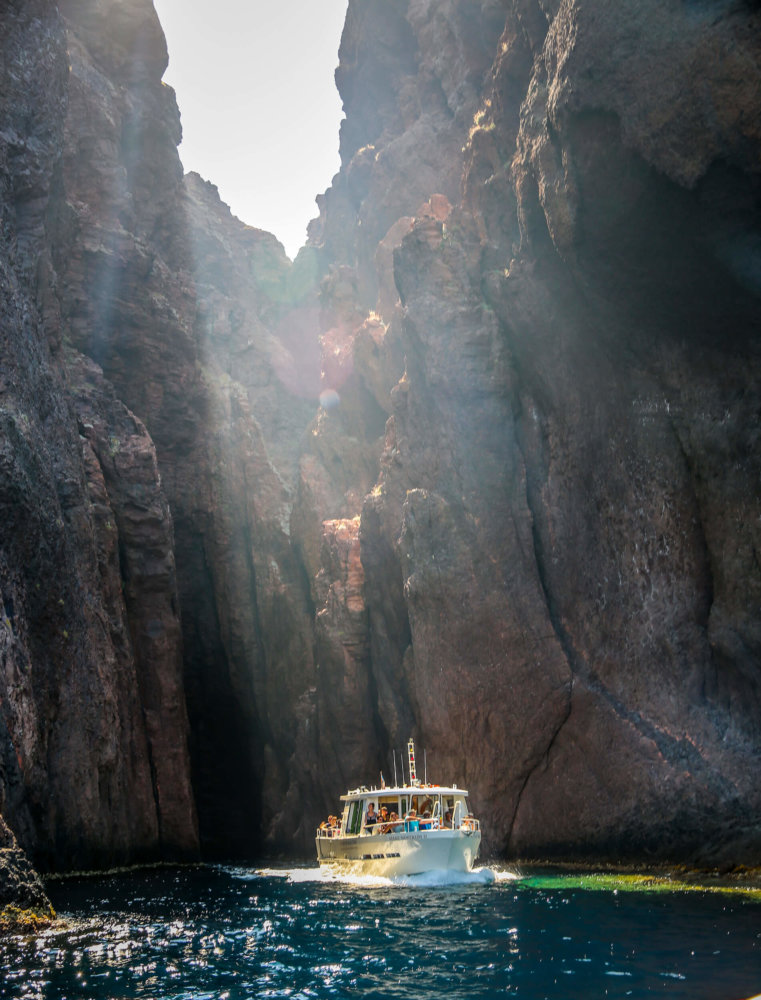 All along the ragged and rugged coast, there are endless little water-filled slot canyons and skinny tall coves that you can duck into.

Okay, sit back, click on a pic and prepare to see a lot of pictures of big colorful rocks.  YOU REALLY NEED TO CLICK ON A PICTURE AND OPEN UP THE REALLY BIG ONES. This place is just incredible:

Coming around from Calvi, your round the bend of the top left corner of Corsica and BAM, you something good is coming….

The deeper you go, the bigger the jagged cliffs get.

Those Genovese Towers, everywhere around the Med.

You can go to the IMAX theater and watch one of those movies that go back in time to show you how the earth developed. Or you can come to Scandola and watch it in real-time. They use Swim-a-vision ™ .

I call this Donkey Rock.

This is Technicolor Overload. The rocks. The water. The white boat. Silence falls over the boats, everyone looking up with a grin.

I called this one Porpoise Rock

All along the ragged and rugged coast, there are endless little water-filled slot canyons and skinny tall coves that you can duck into.

The rock formations and geology changes on every cove… you never know what’s coming around the next corner. 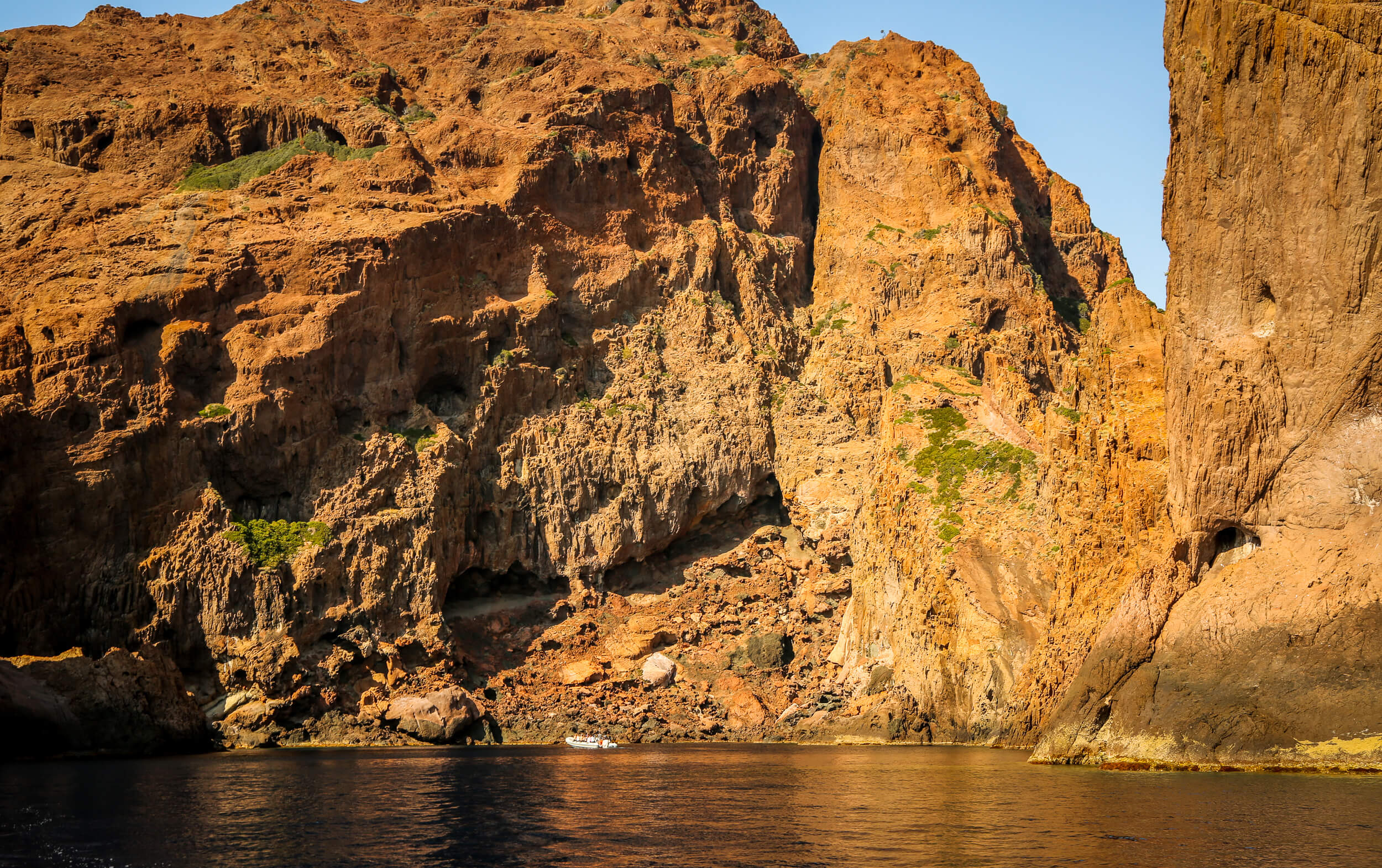 You see that little boat down there? It’s actually not that little, probably is carrying 25 people. That shows you how big this cliffs really are. 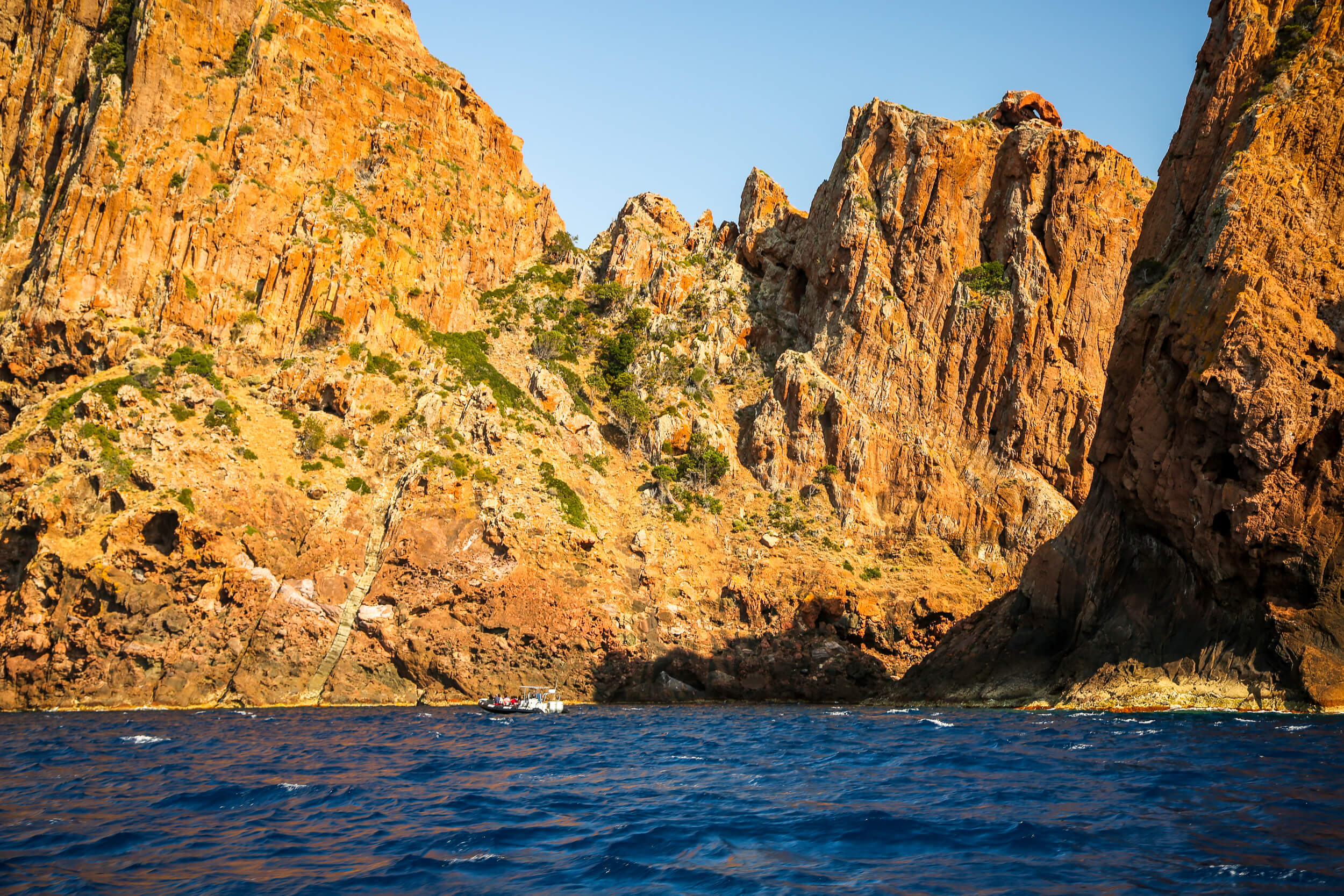 See what I mean?

This is Frank, my awesome driver. Just me and him. He was awesome at interpreting my Lousy French and knew exactly what I was saying.

We went around the corner, down a narrow slot in the canyon walls. Another boat was coming out. I thought “Well this is cool.” I had no idea what was about to unfold.

You really can’t tell how big everything really is until some other boat comes along, closer to the walls and then BAM, it hits you. Those cliffs are huge!

You can save some money and take a big boat, but honestly, looking how big they are and all those people clogging to one side, I can’t imagine how marred your experience would be fighting to get a look. Or even a picture. Everyone fighting for a view and dodging the selfie sticks.

It’s funny, I saw these same guys and their perfect Picnic Boat over a week ago down at Domaine du Murtoli. They know how to find all the good spots. Obviously.

Eventually the Reserve peters out into just typical perfect Corsica. Not Amazing Corsica.

I didn’t stop in Calvi, but everyone raves about it and it’s Citadel. Saving for next time. You can fly or ferry right into here.

Normally you hear the phrase “oh, there’s a beach right by the harbor” and you immediately think ewww. This one’s not like that

L’Ile Rousse is much cooler than you’d think it would be. A pretty little port and beach, clean as a whistle. 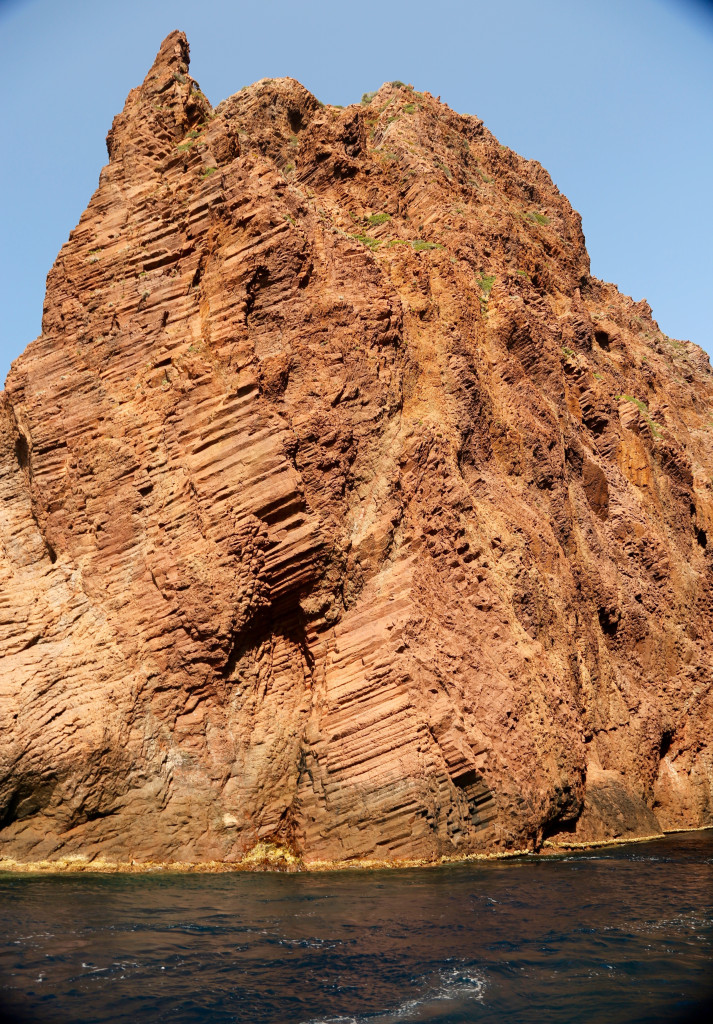 Here are all my other posts on the magical island of Corsica.

On the Corsica Travel Guide

A little more detail and some good pictures on the UNESCO World Heritage Site’s page on Scandola Nature Reserve.

A great article in Vogue about all the top places in Corsica, called “This Summer, Head to This Chic Island Where the French Go to Escape.”

Another overview on Corsica featured in the Huffington Post.