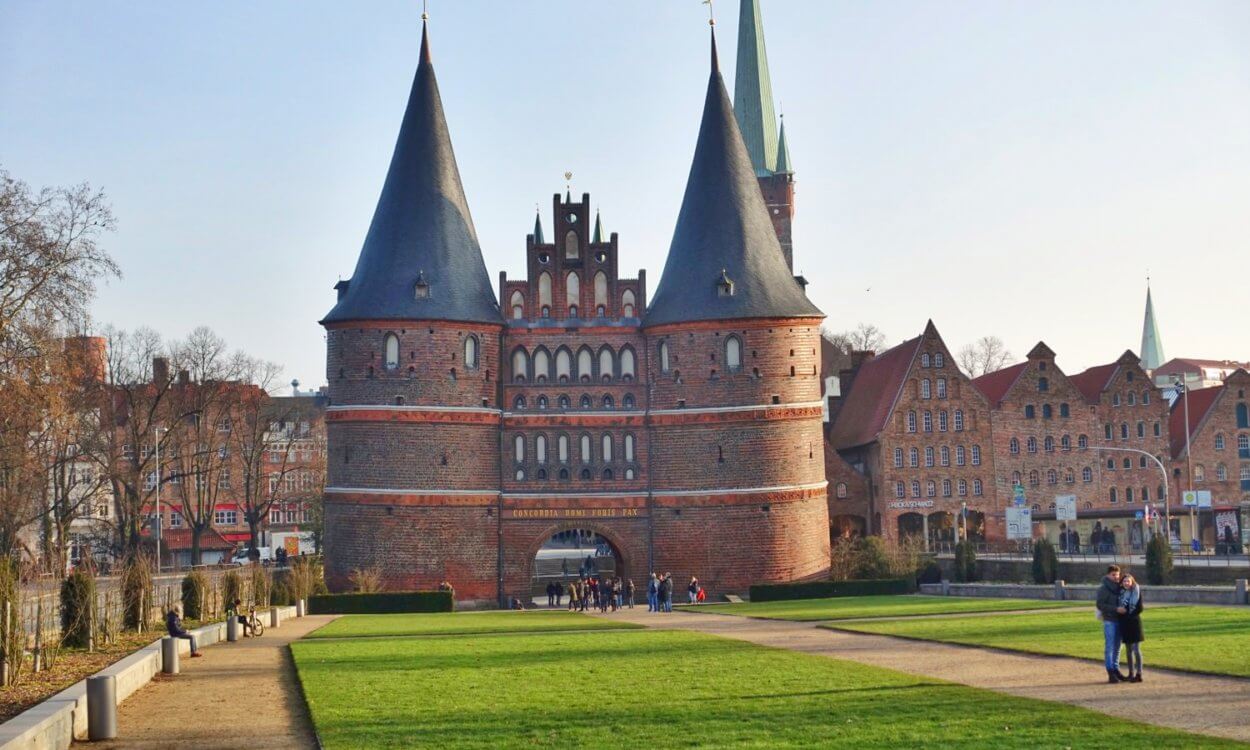 [LÜBECK, GERMANY] — It’s the eerie, fairytale looking architecture of Lübeck that hits you. Makes it almost surreal. Huge, squat high-hat towers dwarfing a bright green lawn. Rust colored tiles tipping to the sky. Little people, tiny in front, selfie sticks trying to get the right angle. The buildings almost look like stone gnomes. Frozen Expedia gnomes, as they should be.

As you’re adjust your zoom lens, trying to get a level angle, that’s when you realize it’s not you or your lens, the whole building is a little crooked. This was an old guard house, or toll house — the Holstentor (“Holstein Tower”), that used to protect this rich and prosperous city.

They entire old city of Lübeck is built on an island, surrounded on all sides by gently flowing river.

Going back to the 1300s, Lübeck’s old town was the capital of the Hanseatic League — a term I had never known before, but was an ancient trading alliance of the northern European states, Scandinavia and other. If you look at its buildings, you can see a similarity between churches and buildings in Copenhagen, Amsterdam, Stockholm and Oslo, all with their ginormous church steeples.  That trading alliance lasted for hundreds of years and helped make this town extremely wealthy and well-protected. Most of the buildings you see today were built going back to the 11th, 12th thru 14th Centuries. You can see why this is now registered as a UNESCO World Heritage Site. 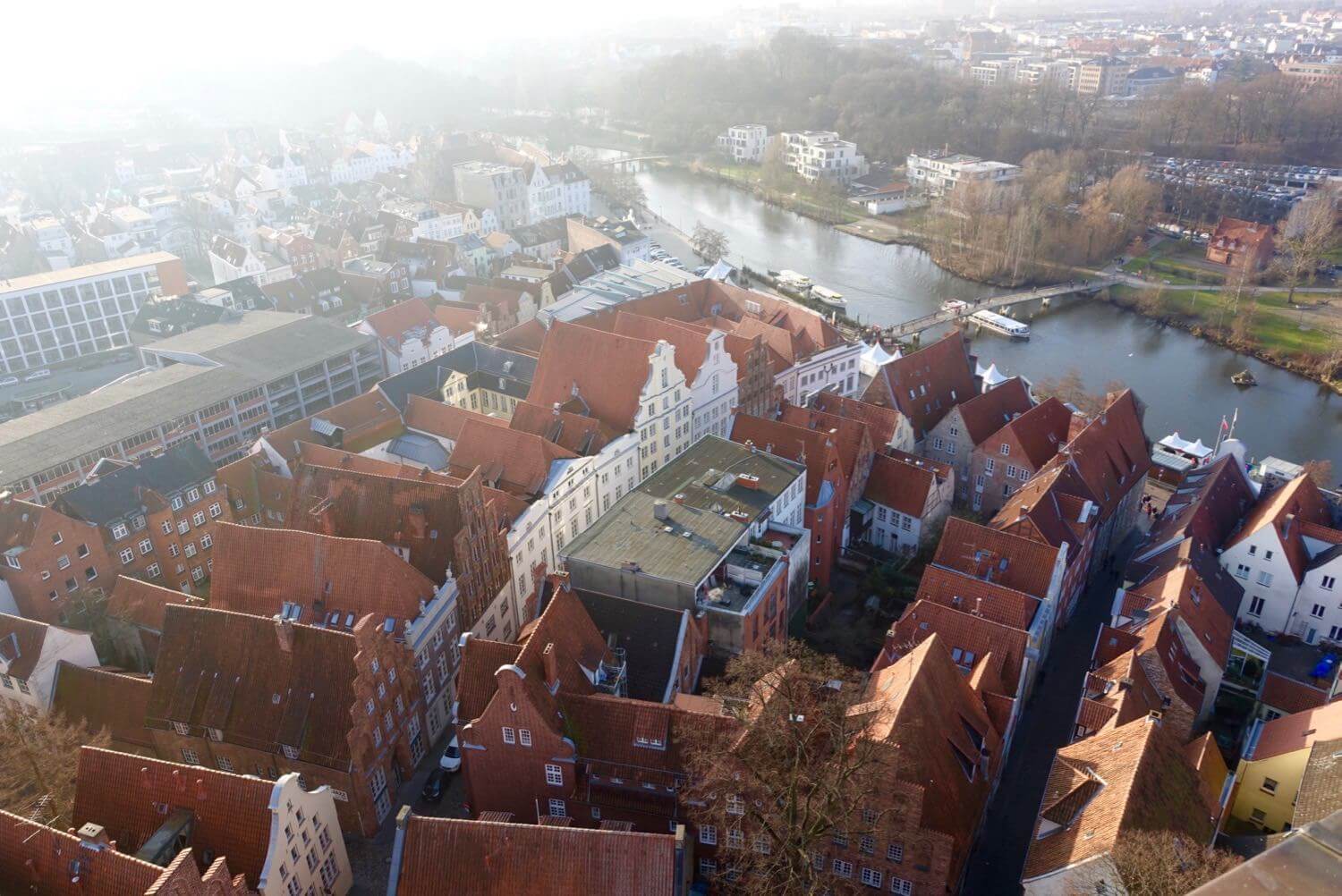 A great day trip out of Hamburg is the UNESCO World Heritage Site town of Lübeck. This place is old, started in the 1100s and used to be the capital of trading across the Baltic states. Lots of cool old buildings on the fortified island, surrounded on all sides by a quiet forked-tongue little river. 🐍 It’s where you’d want to build a fort if you were standing there shivering back in the eleven hundreds. (No need to dig a moat!) A lot was blown up in WWII, but plenty of old character remains, perfect to spend the day.

You climb the old church bell tower for these amazing views. Listen the the church bells:


Lübeck is short train ride from Hamburg and the perfect day trip. Trains leave about every hour and take less than an hour. The perfect place to go to walk the streets of the old city. Make sure you take a boat tour around the city-island.

Take a Boat Tour Around Lübeck

Take the boat tour.  Just amazes me that these giant bell towers (40 stories!) are made out of brick, not stone. Wild looking. (Wait for it.). Can’t believe they built these way back in 1350. That’s a lot of Up for that time period. I wonder where they got all the rope. 🏗

Where to Eat in Lübeck

Okay would you just look at this place?!?! After freezing to a ☃️ on my canal ride, I needed something warm, fast. Preferably made with vinegar.

If you come to Lübeck, you have to eat here. I read about it in a Telegraph article. The Schiffergesellschaft is an old sailing captains’ meeting hall, but turned into a restaurant in 1868 and has been slinging fish ever since.

Wooden model ships hang from the ceiling amidst the random Christmas ornament. The antique light fixtures have an internal carousel with cutouts of ships and seafish that dance across the shades like Indonesian shadow puppets — which is probably what inspired that light, this being the former capital of the Hansean trading empire. (Either that, or they found it at Costco, next to the cashews) 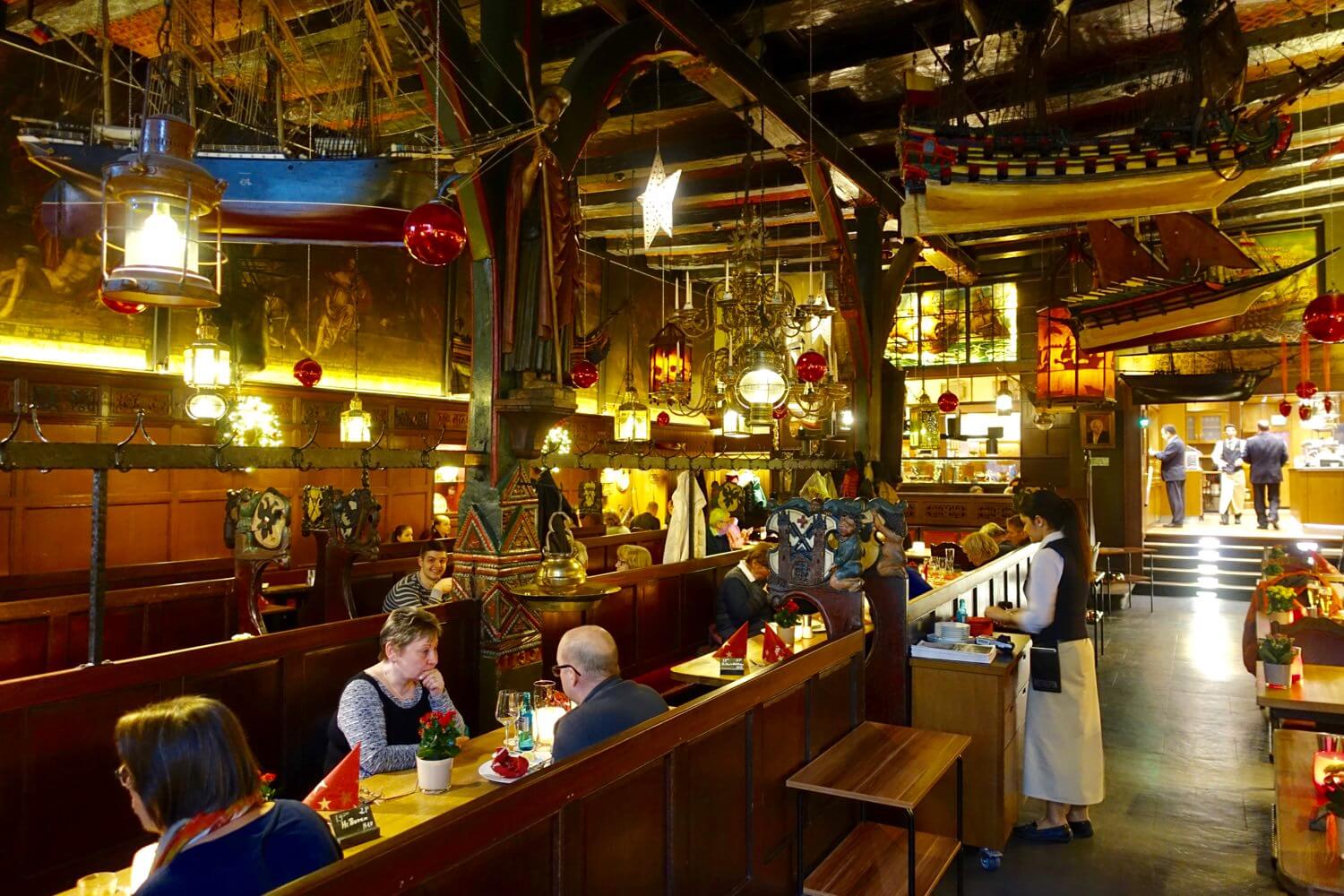 The Schiffergesellschaft is an old sailing captains’ meeting hall, but turned into a restaurant in 1868 and has been slinging fish ever since. Their website says it perfectly: you can look at history preserved behind the glass or you can participate in it. You can see how it is still set up the same way as it has for hundreds of years, with old wooden booths for each crew, captain at the head of the table, natch. High booths prevent the crews from smacking rivals behind them over the head and turning the whole place into a sailor brawl.

You’d expect this to be some touristy place, with aping people 🐒and corny and kitschy on the menu. But the food and the people were zuper nice and genuine, including the suit-and-tie-wearing maitre’d who gave me the most prime spot to view the whole room. Couples and families tucked into booths all over the place. I had the cutest, sweetest waitress that could be. Her dark hair and olive complexion perhaps a telltale of when the Spanish sailors later tore through these parts.

The most delightful retired couple from Köln sat next to me; introduced themselves, in awe of the size of my schweinbraten. They come here every time they visit their vacation house on the coast in nearby Travemünde. He was a smart and witty retired accountant, and you can tell she ran a tight ship. Both smart and funny and such a hoot, sharing their favorite fish shacks in the dock lands of Hamburg. As is customary in such situations, we exchanged cards and promised to keep in touch. Which we will. 🍻

How could you go wrong eating a place like this? This former ship captain’s union hall first started renting out the bottom half as a restaurant in 1866. And still slinging fish today. Had a lovely meal. You should go here in Lübeck.

as schweinbraten. Enough to feed a ship’s sailing crew. The only meal I ate yesterday. I couldn’t even finish it. (Very rare. 🐷)

Here’s a great article from The Telegraph, 36 Hours in Lübeck

Also from The Telegraph, “A Cultural Guide to Lübeck”

I only was there for the afternoon, so only got to at one meal at the perfect Schiffergesellschaft, but here are TripAdvisor’s top restaurant lists in Lübeck.