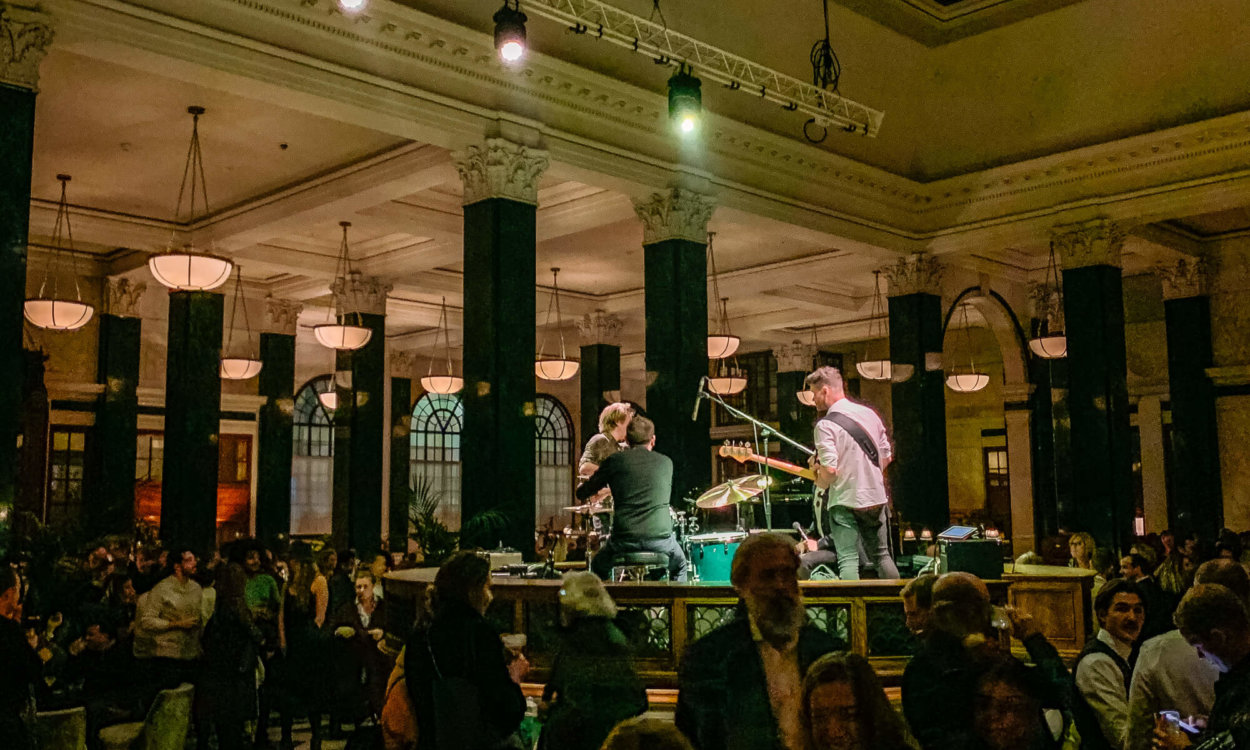 A ROCKIN’ HOTEL IN LONDON YOU NEVER WANT TO LEAVE

[London] — You could feel the early Christmas season in the electric air. It was 4:30 on a Friday and the place was packed in every direction you turned, shoulder to shoulder in most places, everyone dressed up a little more festive than other weeks of the year, smiling, toasting success.

It was dark in center of the great grand lobby, ninety four green marble columns rising thirty feet into the air, each with a top hat of shiny acanthus leaves, in a Corinthian way. The whole place felt Corinthian.

The whole place was buzzing, swaying to the silky jazz singer. It felt like pre-war London.

In the center of this laughing mass rose a band stage, 360 degrees round and trimmed in thick wood and marble… everywhere you looked was marble. Spotlights illuminated a long brunette in a shiny chic suit crooning sexy jazz tunes, cradling the the microphone like a dance partner as the tunes wafted up into the giant hall.

This feels like pre-war London. All these people dressed up and nowhere to go but here. Wow, what a place. 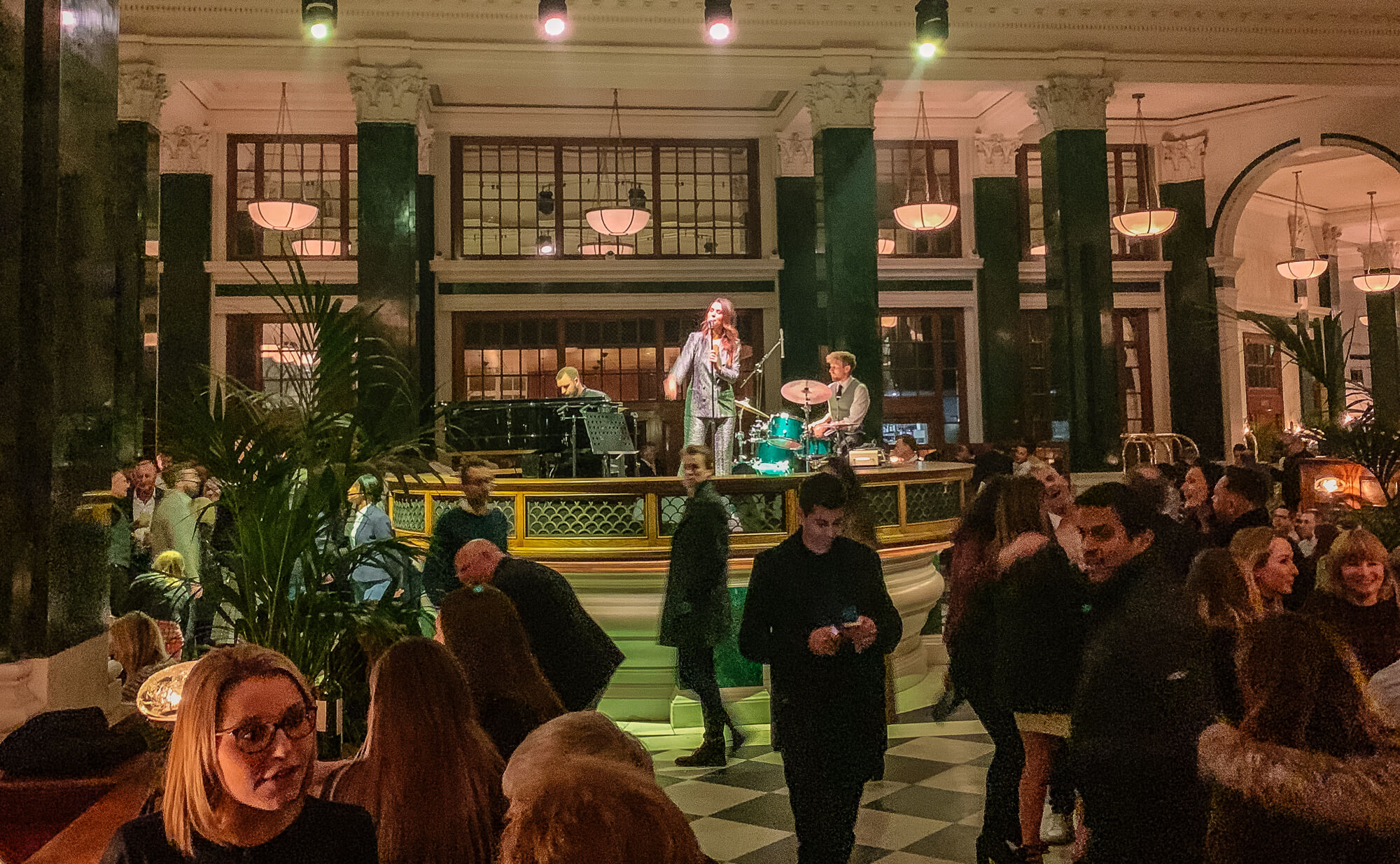 Ohhh maaaan, I’ve been dying to come to The Ned since the day it opened in London. A pretty huge 250 room boutique hotel in an abandoned and now mint-restored 1920s bank in the heart of The City, designed by and named after the famous architect Ned Lutyens.

It’s a partnership with the Soho House gang and the Sydell Group (owners of my fave NoMad hotel in New York). But what’s really cool is the gigantic 3,000 sq meter bank lobby, the Grand Banking Hall, filled with eight classic restaurants nestled in all the old wood teller stations.

I slept about 20 minutes in the bumpy plane ride over and it was pouring 🐱and 🐶 outside.  First, a nap. And then meeting one of my best friends who lives in London.  We planned to hit all eight restaurants… in a roving feast. I wasn’t planning on leaving for two days.

I hope they have seatbelts…. 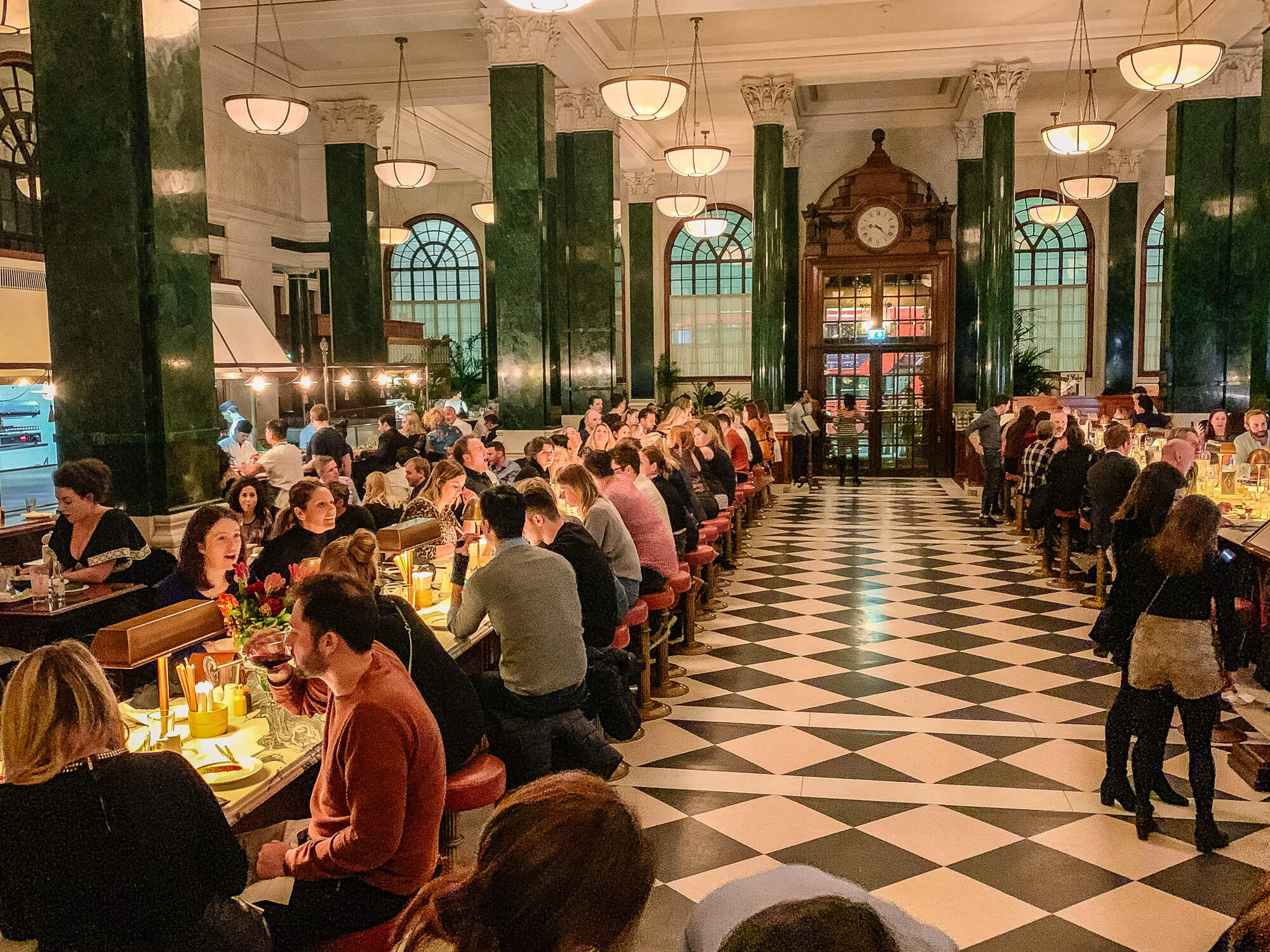 If it looks like a lot of columns in these pics, it’s because there are 92 of them holding up the sky in this gigantic former bank lobby.

Well, so that first night didn’t turn out like planned…🤪. Turns out we weren’t the only ones who wanted to go to The Ned.

With little planning, every single restaurant in the place was fully booked during the busy holidays. Our eat-around plans were cabosh. So we just moved from place to place and drank like we were 30 year old bankers (as were most people jammed into the place.).

Things were a little less crowded the second night, a Saturday when most City workers are probably at home.

The Ned really is something else, creating its own Center of Gravity in the world. So much going on.

Early December is a lovely time to be here, peak pre-holiday Friday afternoon celebratory vibe. Gaggling groups of heavy coated and nicely scarved peeps walking in, stopping in the tracks saying “oh yes, yes” and smiling before heading to their appointed area. Holiday celebrations were everywhere, tables of laughing coworkers tearing apart Christmas crackers like children until everyone had a crown. 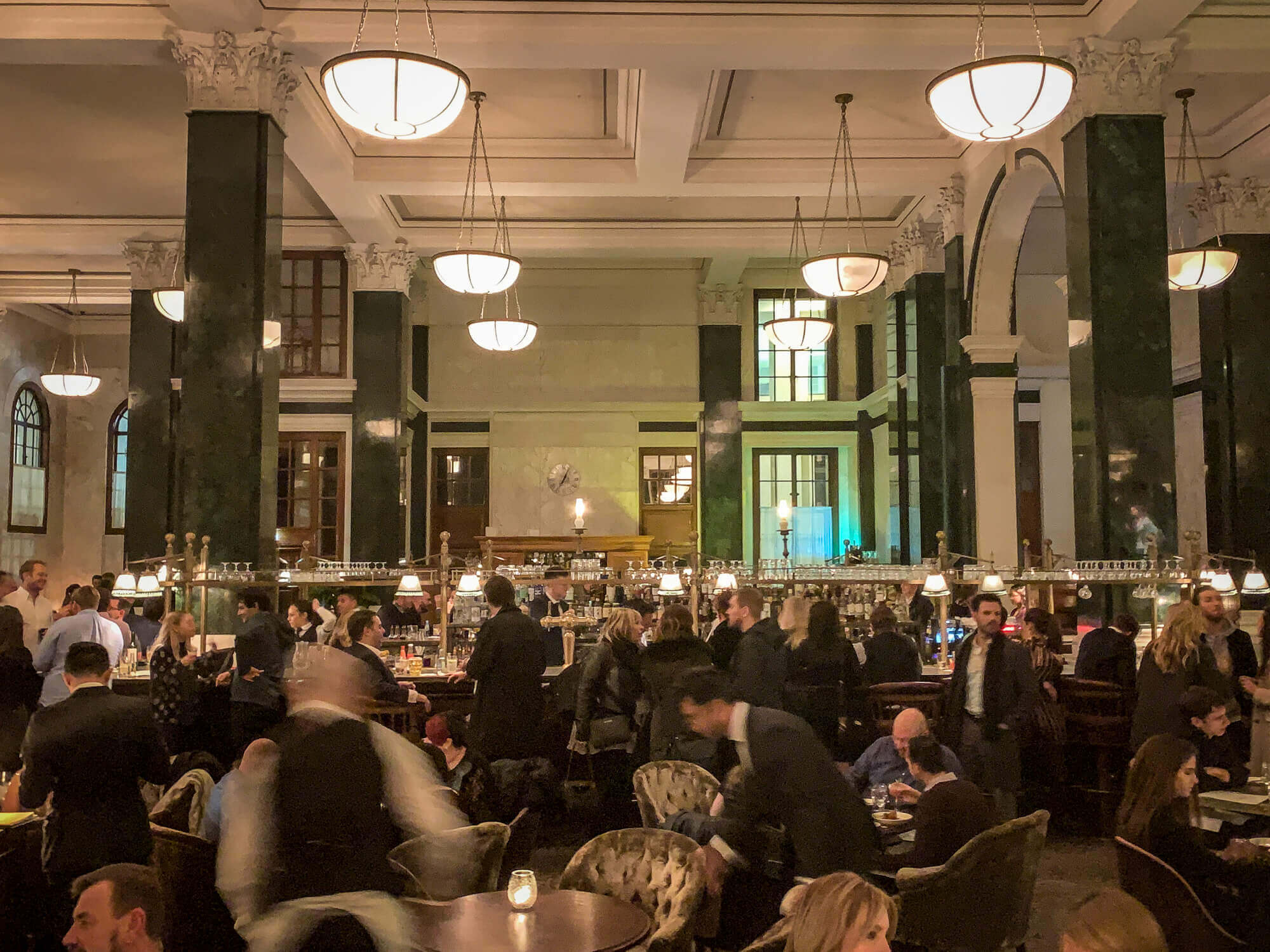 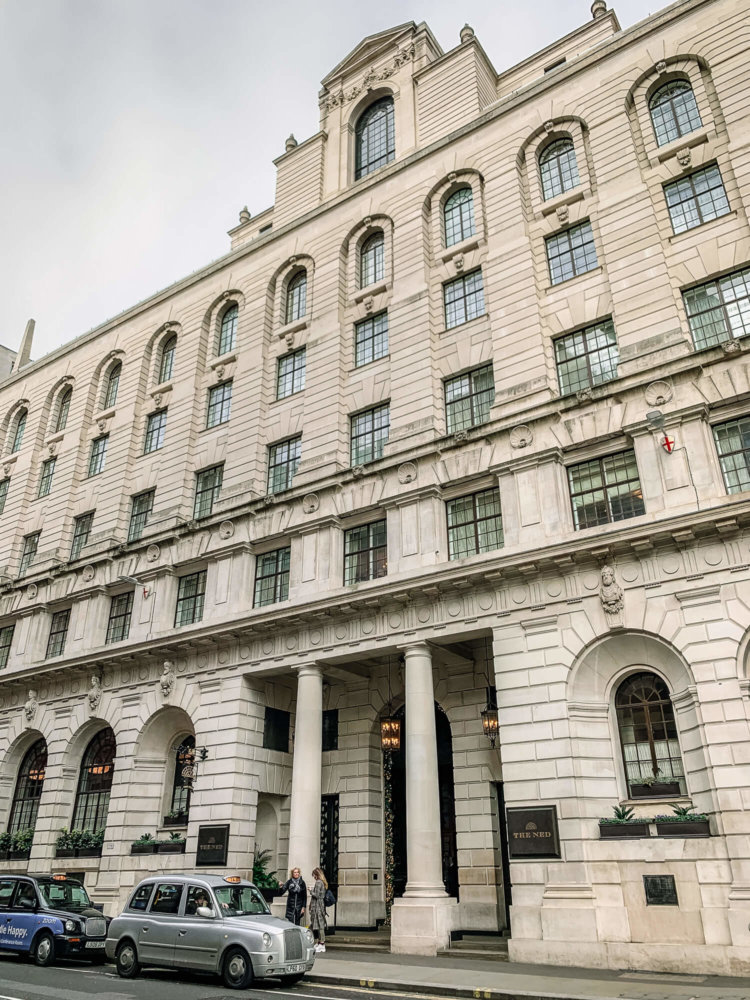 Like a movie set. The restored 1920s bank building is a listed building, mean it has to be restored to the highest level. The address is 27 Poultry.  Not Poultry Street. Or Poultry Lane. Poultry. That’s it. I like that. 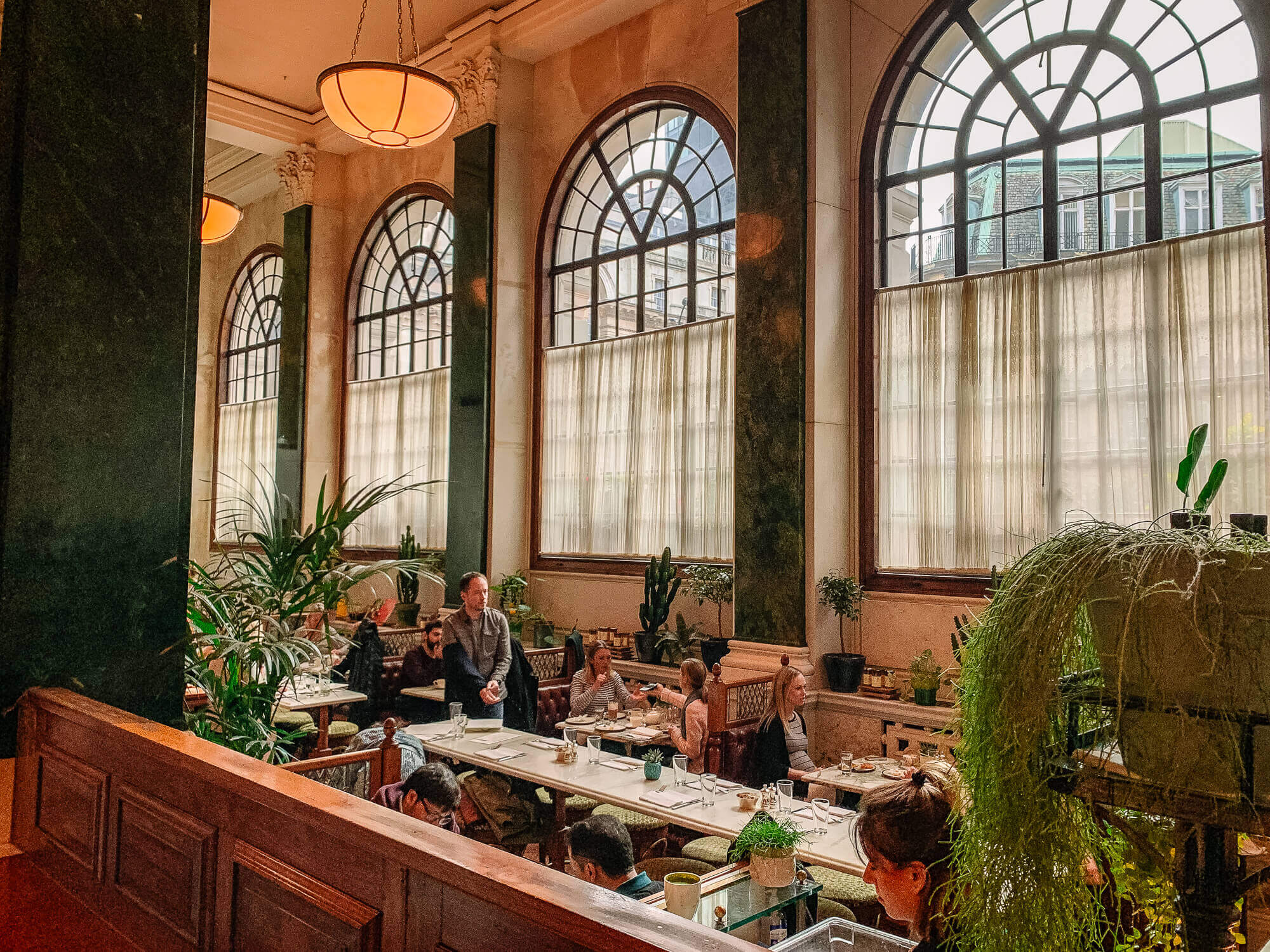 I had just bought a house before coming here, with these exact windows. I was thinking of replacing them, but saw this as a sign to keep them.

The Restaurants at The Ned

As it got later (we waddled around for hours in this hooch) it got louder and louder, the lights darker.  A propped up central stage sits above the crowd, with a small jazz ensemble crooning to everyone and no one at the same time, later morphing into a blues band then a rock band as the night mows on. Bands seemingly changing by the hour.

There’s a line to get in, which if you’re not staying here would be annoying (I don’t wait in lines) but if you’re a hotel guest, you can skate by ⛸. So make reservations. Downstairs some guests can sit in a members-only bar, or have a drink in the massive old bank vault.

It’s a total scene at night, but much calmer for brunch and easy to slip in if you’re not staying here.

There are eight restaurants and a number of bars spread from the bank vault downstairs to a hard-to-get-into rooftop restaurant. Steakhouse, a classic Landon eatery named Lillie’s, an output of Cecconi’s, a deli, a sushi and seafood restaurants. a pub.  Name your poison and they have it. You never have to leave. 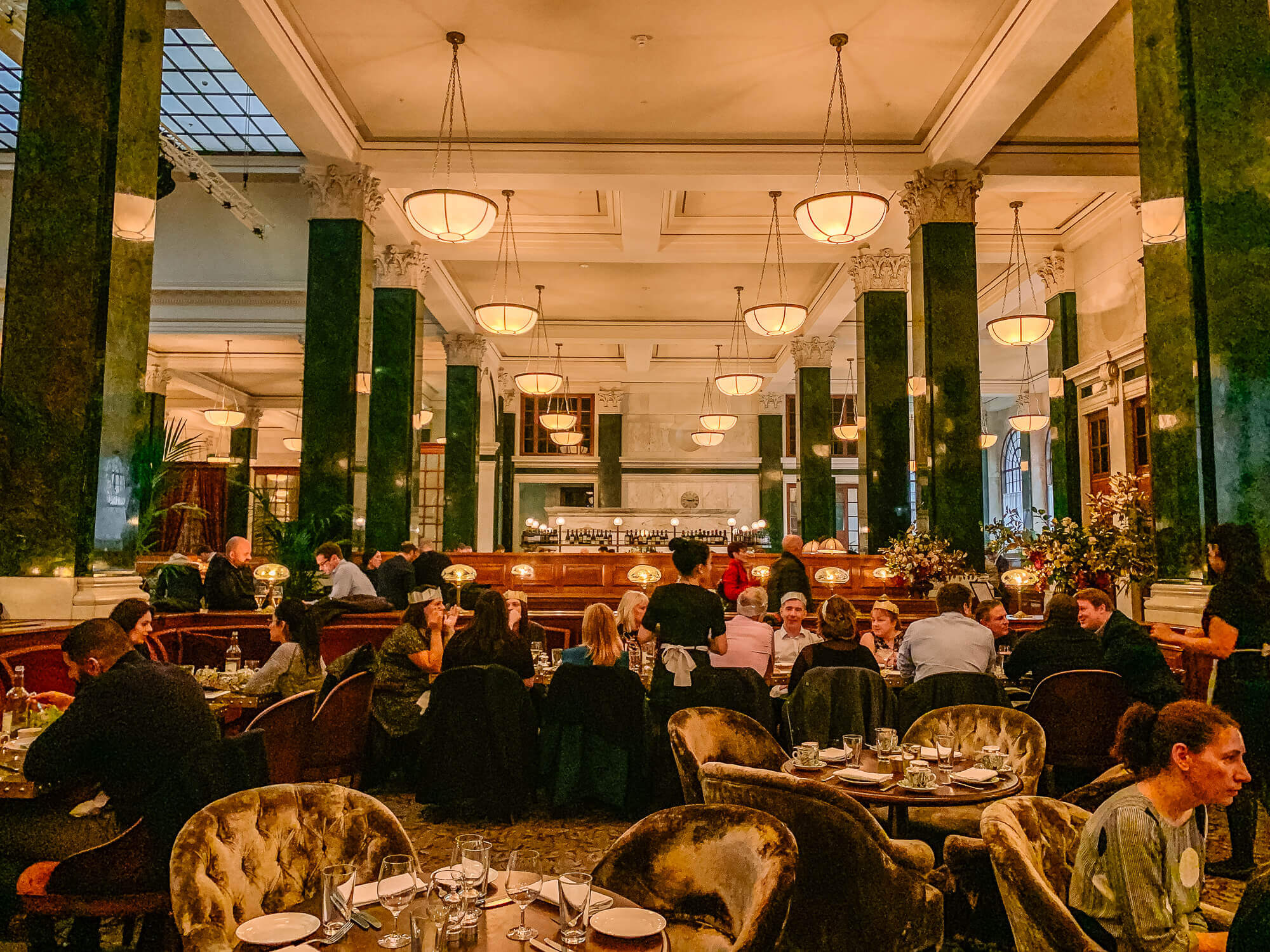 My second night at The Ned was much more inline with what I had in mind. Just a mellow place to hang. All the holiday end-of-work crowds were back home in the suburbs — the City was never known as a night haunt. A much mellower crowd, more destination folks.

There is a lovely little sit-at bar at Cecconi’s, with a couple of martinis, tuna tartare, some plin agnolotti from northern Italy (my new favorite pasta) with shaved black truffles and… pheasant pancetta (!!) 🤤

The band trio was more mellow acoustic rock, like an Unplugged Simple Minds. A perfect cap to end my short stay in London. Highly recommend The Ned.

Seriously, how many different bands am I showing here? They changed every hour or two, from jazz to blues to rock to acoustic. So refreshing compared to typical hotel Muzak 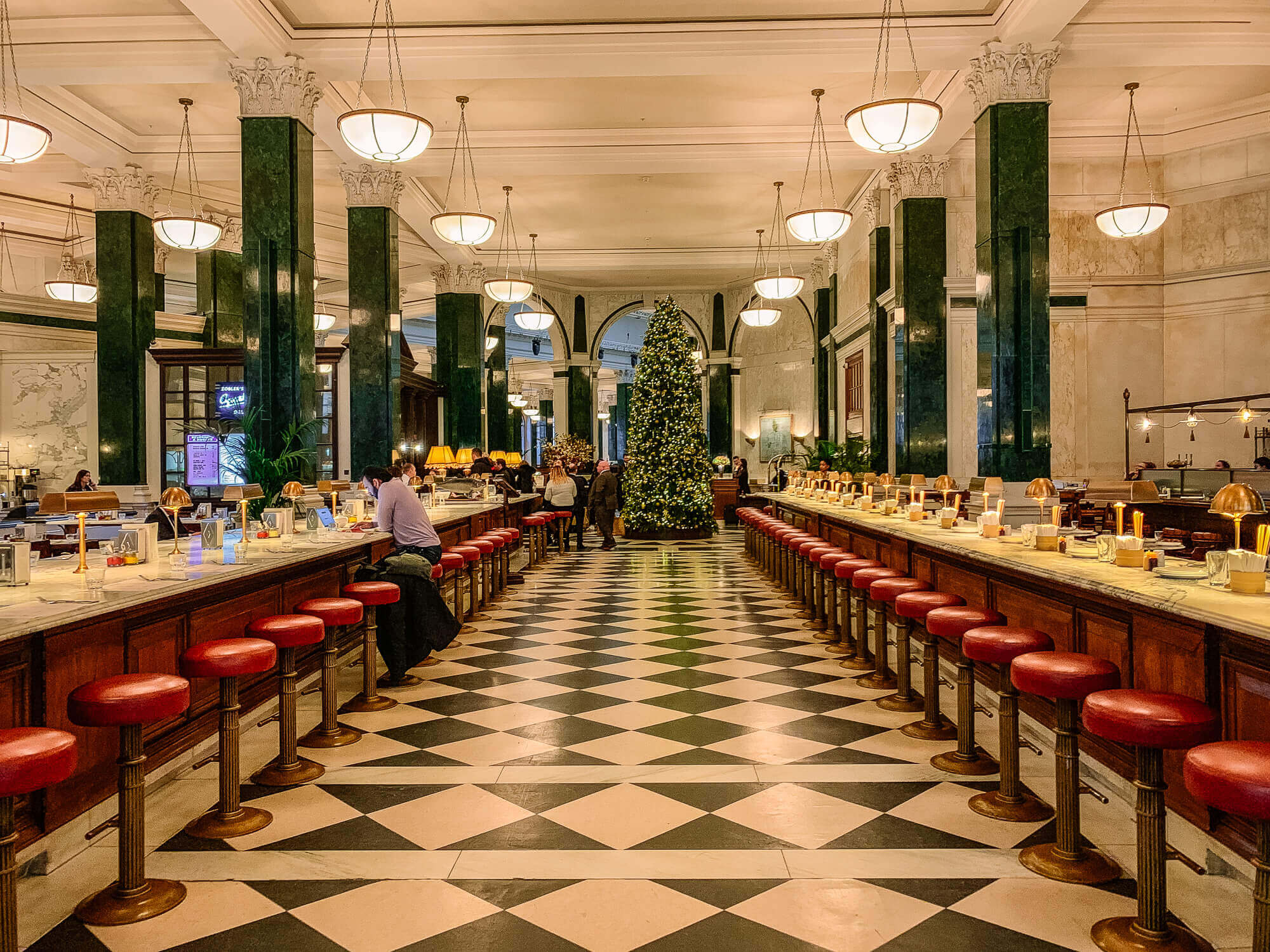 This is the “before” shot. During the day, there’s a steady hum, but not crowded. You can grab your laptop and take a seat anywhere among the eight restaurants. Like an Ace Hotel for grownups. 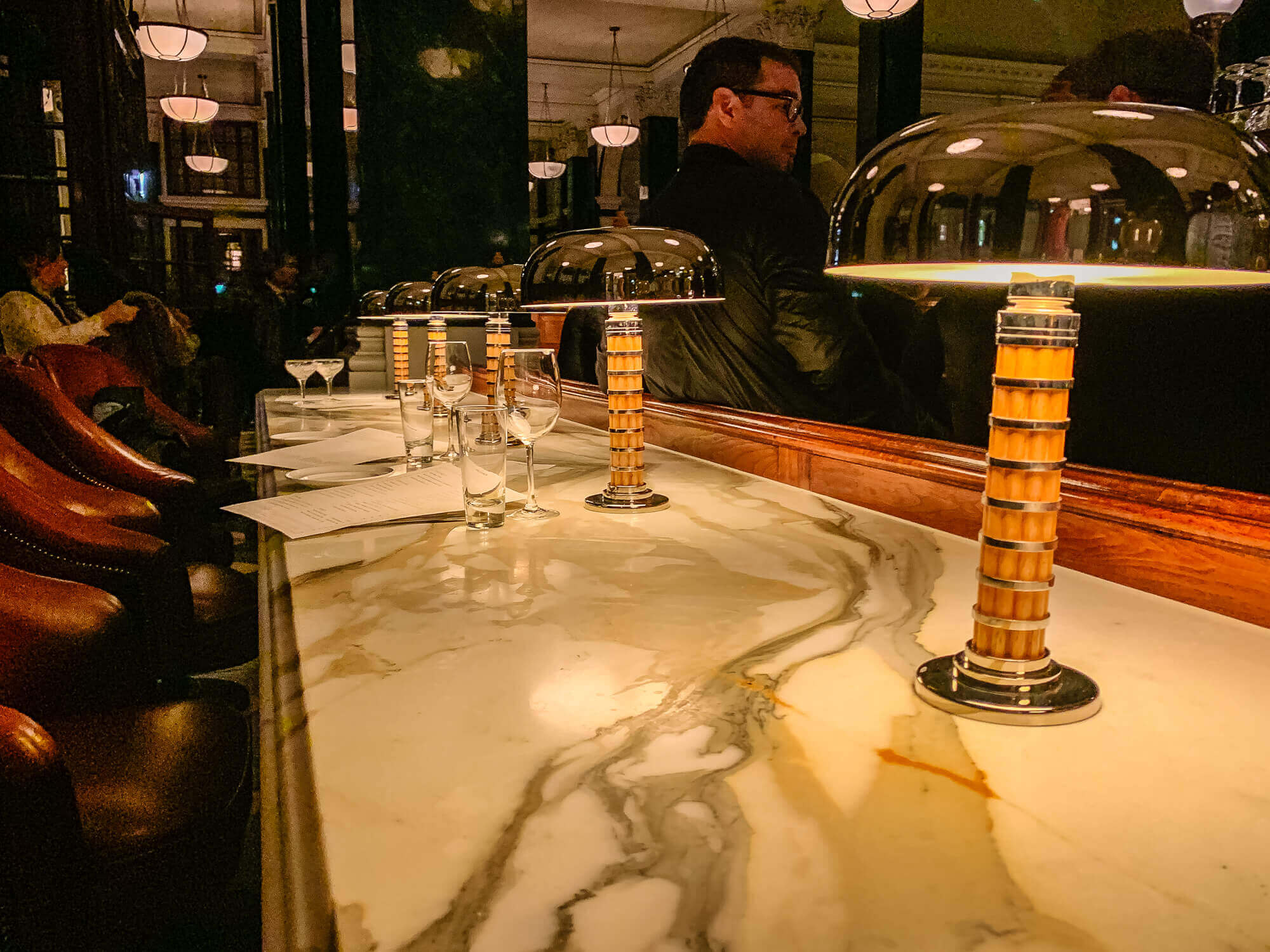 The Rooms at The Ned 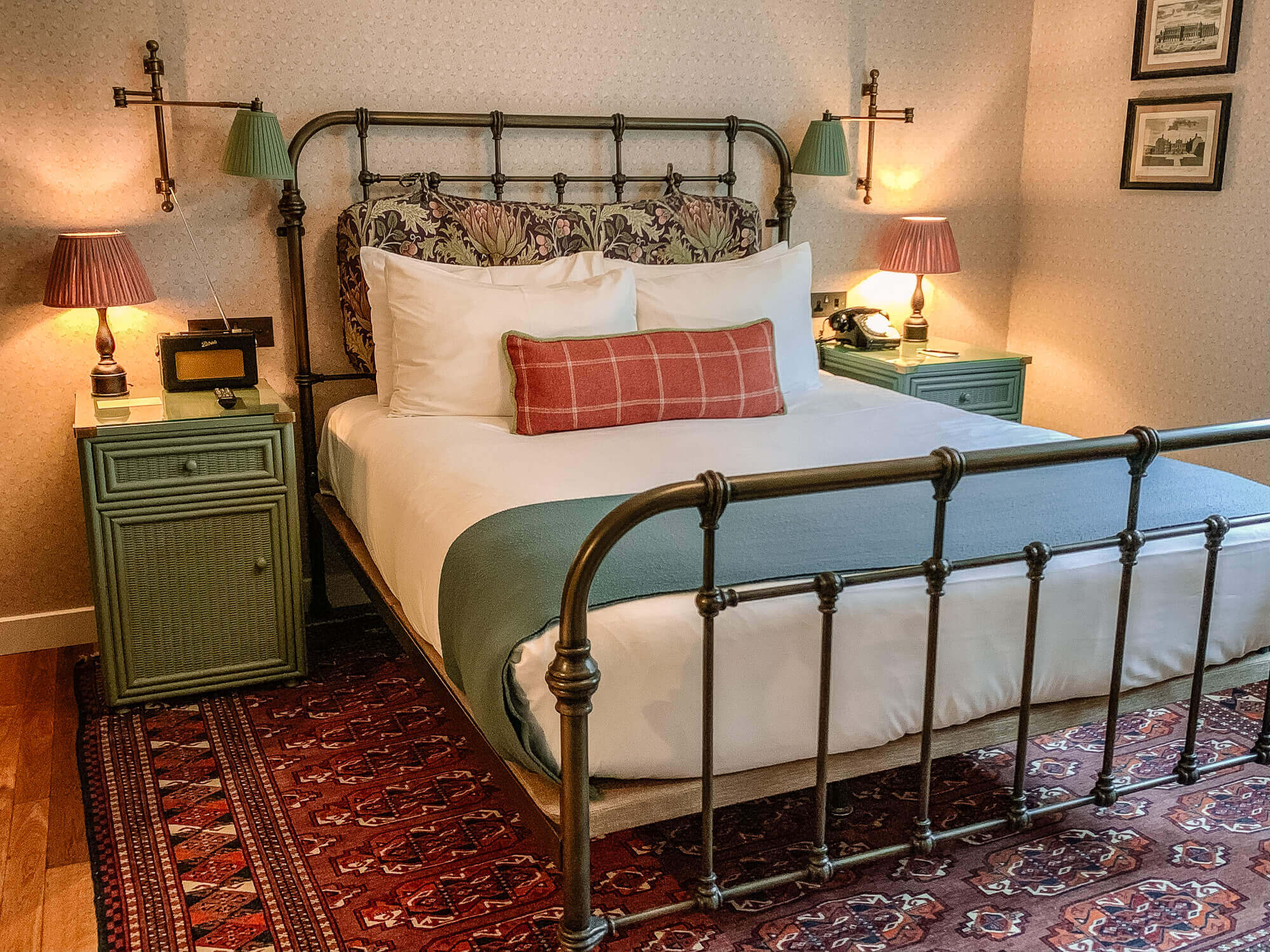 The bedroom fits the era of the building. Loved every small detail.

There are 250 rooms at The Ned — which is large for a boutique hotel — in a number of different types, at different price points. From Grand Heritage to “Crashpad” which was purposefully designed to be a last minute crash for the drinking bankers below. I got the “Cosy” room category, which you can see what it’s like. At $300 pounds a night, I found that a great deal for astronomically priced London, especially for such a nicely appointed room.

I found it the perfect size. Roomy. Loaded with details and incredible sleeps. I’d ask for a high room, as some reviews have said downstairs sound creeps up in the lower floors. I was on the Sixth Floor, didn’t hear a peep.

Apparently, Cowshed spa downstairs products are a big deal. All of these flavors are in the shower.

I believe this company that invented toilets is where the term The Crapper came from. 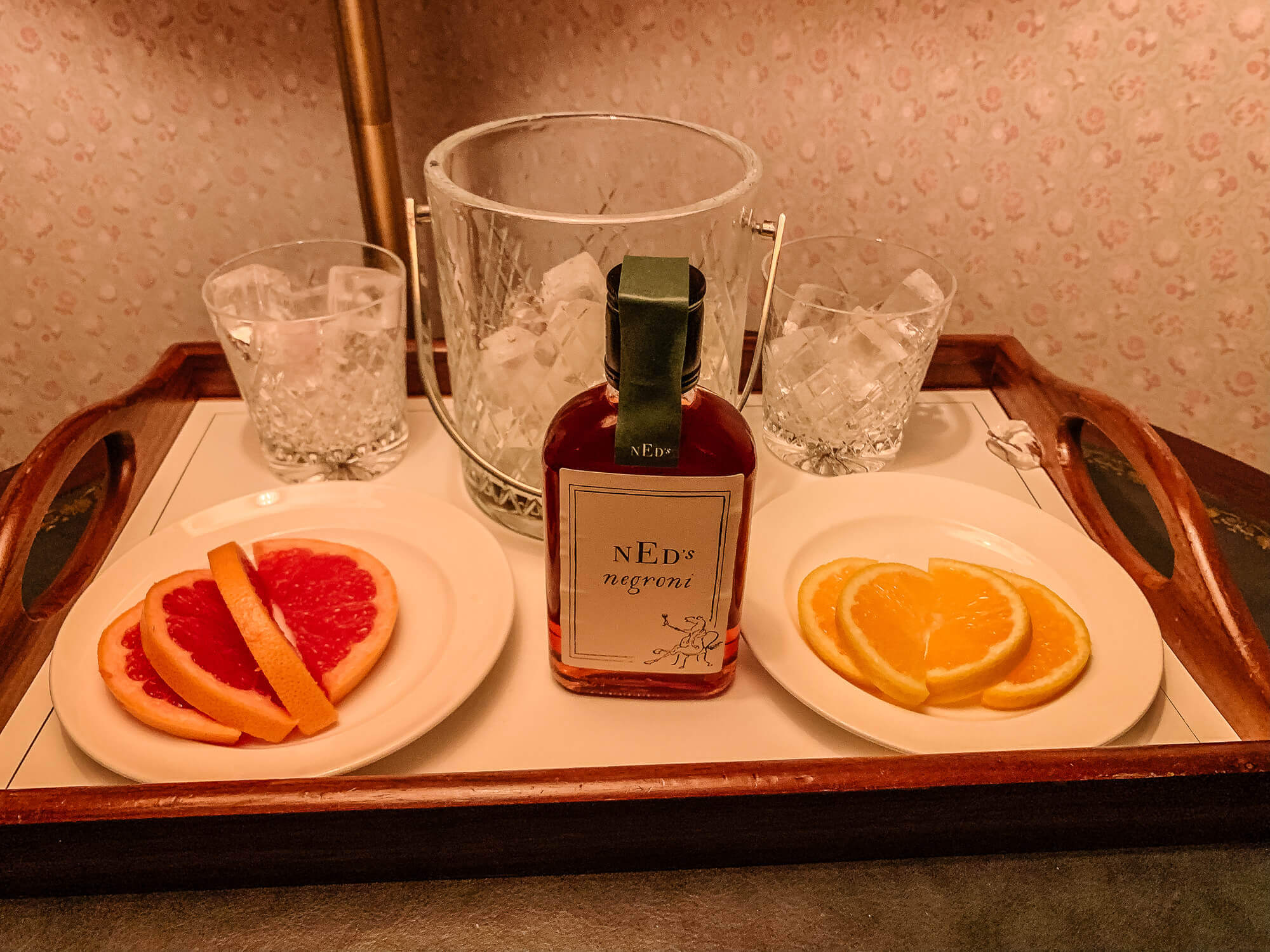 This was one of my favorite touches, batched Negronis in the room service bar, as well as Old Fashions and several other classic drinks. 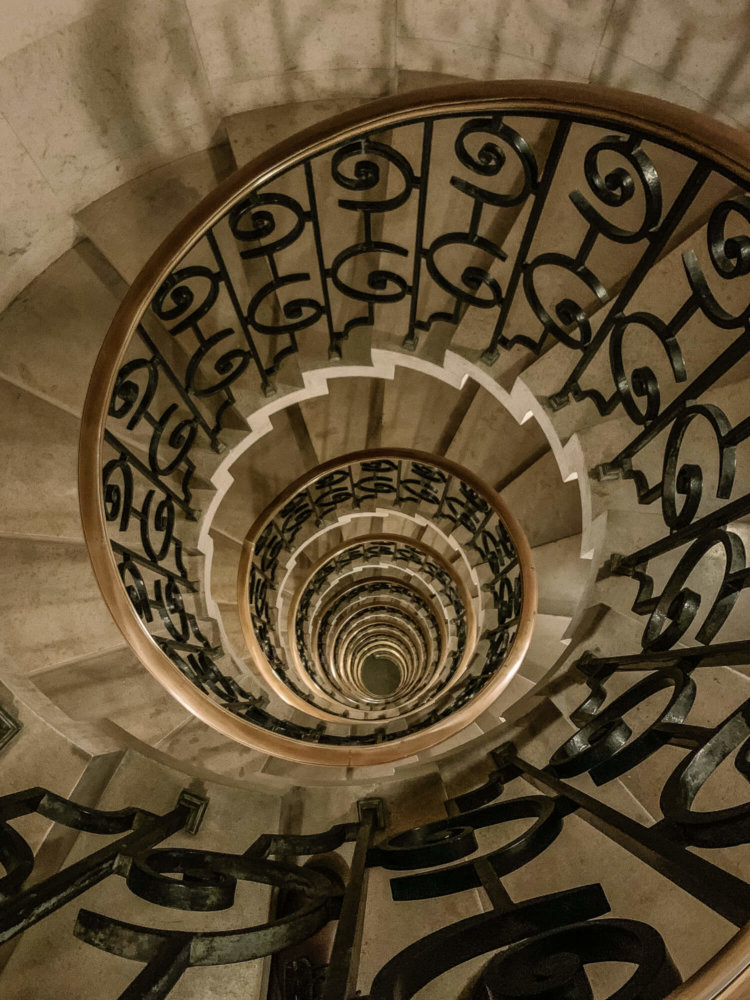 And this was just the emergency stairway…

Venture Out for Lunch in Jumpin’ King’s Cross 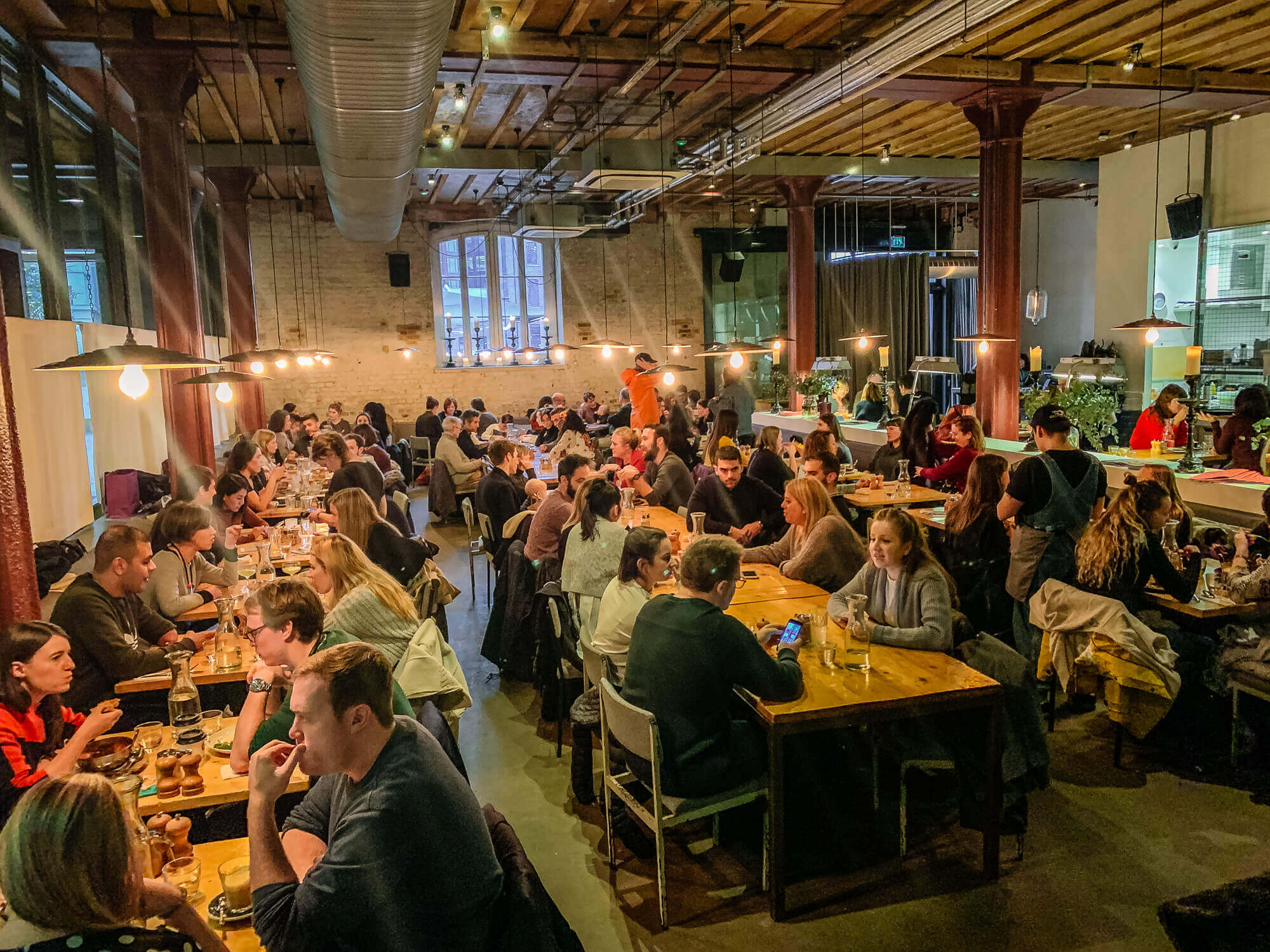 One Sunday, I tried to get to Dishoom in King’s Cross in London because I’ve always admired their design from afar and wanted to see it in person… but alas, there was a line of 40 people to get in.  Peak Brunch. Only got to peek in the window. I’d suggest reservations.

So instead was able to slide in ahead of the line at the wonderful Caravan around the corner and ate at the bar. Perfect in every way, especially the music. Nice people, too. A little bit of everything, with a South American slant on food.

Wow, it’s been a long time since I’ve been in London. Amazing how King’s Cross has changed compared to my last visit 25 or so years ago. Back then it was gritty and dirty and abandoned, now it’s a destination, loaded with families, brunchers and shoppers. Definitely recommend you should go here.

Just love the looks of Dishoom. Have seen pictures for a long time, tried to go see. 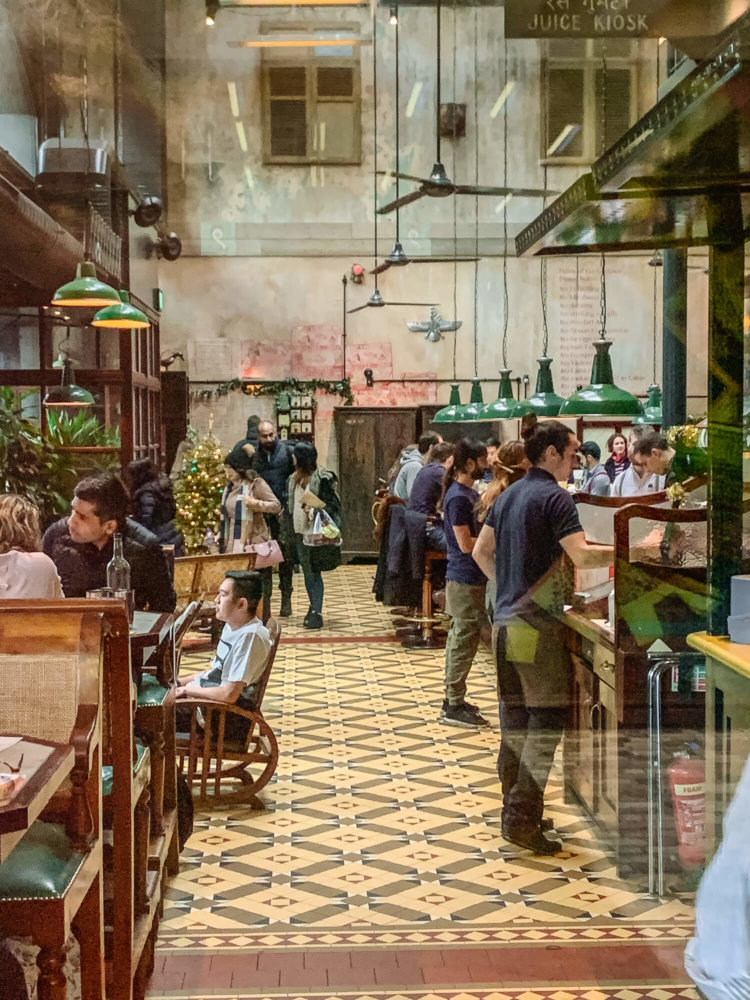 Tried to go to Dishoom, London’s super hot hip, Indian mini-chain, but I arrived at Peak Brunch, with 40 people in line, so only got to peek in the window.

More Information on The Ned

Here’s a review from the UK’s Conde Nast Traveller. A great review in Forbes. A crisp 7/10 review in The Telegraph. A business story about The Ned in The Telegraph. From The Standard, a story on how The Ned is becoming a hot late night place.  A snarky review of the restaurants from The Daily Mail.  An article from Bloomberg.   Another from Vanity Fair.

Here are other posts I’ve written on my last visit about ten years ago.

Continue reading...
2 Discussions on
“A ROCKIN’ HOTEL IN LONDON YOU NEVER WANT TO LEAVE”