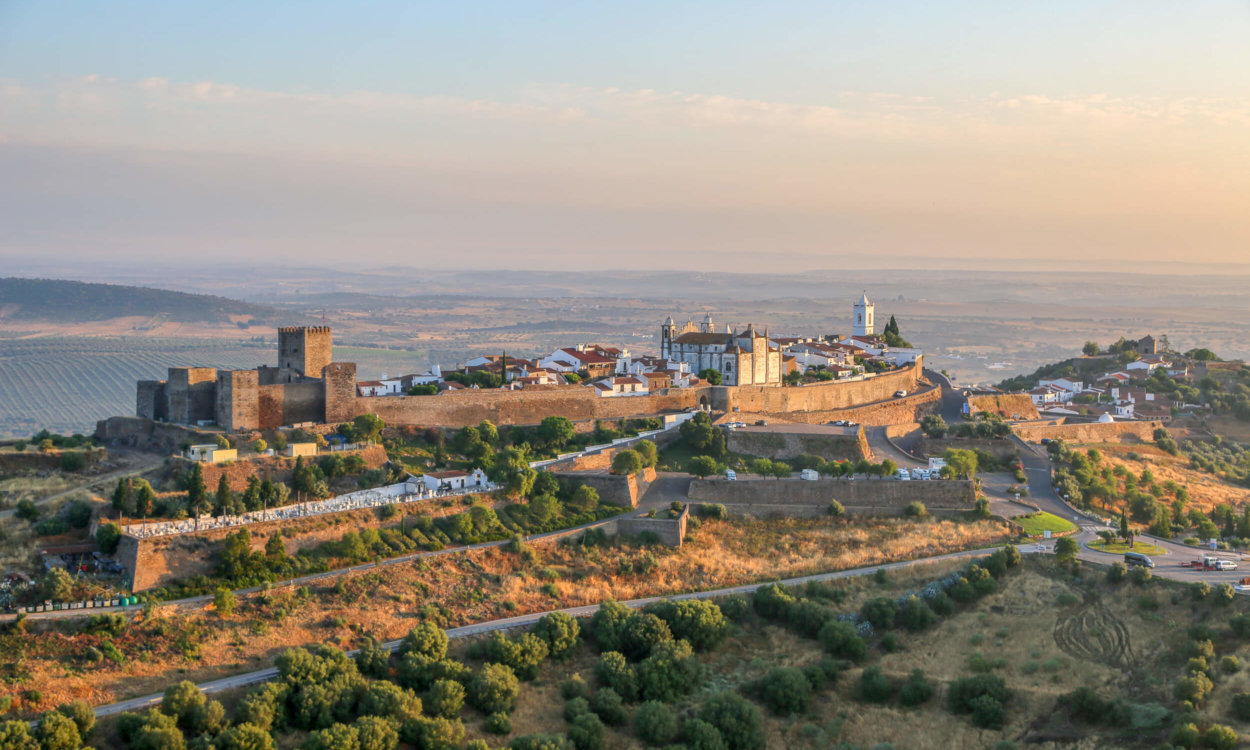 VISIT ONE OF THE PRETTIEST HILLTOWNS IN PORTUGAL

[Alentejo, Portugal] — From this hilltop, the highest in the region, you can see forever. That’s why this little town has been important throughout history. And not just history, but pre-history.  Monsaraz in Alentejo is the site of one of the oldest settlements in Portugal, going back to neolithic times when people were tilting stones to the sky and calling it home. Or temple. Or tomb. There are some of the best neolithic sites in the world scattered all over this region.

This was such a strategic location that it has been fought and won over many many times by the conquering hoards. First, the pagans, then Romans, then the Goths came and slaughtered, then the Arabs, then another collection of Arabs, then Jewish conquerors, Christians and so on. From the 8th Century on, this town was part of the vast Moorish rein that covered the Iberian peninsula and created such incredible architecture and impressive forts. Then in the 12th, the Knights Templar took it back and then it flipped back from various kingdoms since. Now it is conquered by tourists walking its narrow streets to shop for its famous pottery and woven blankets. It’s one of the 7 Wonders of Portugal, voted by the tourist bureau. Now it is considered a “museum village” and it perfectly preserved, with a few residents, shops and restaurants. 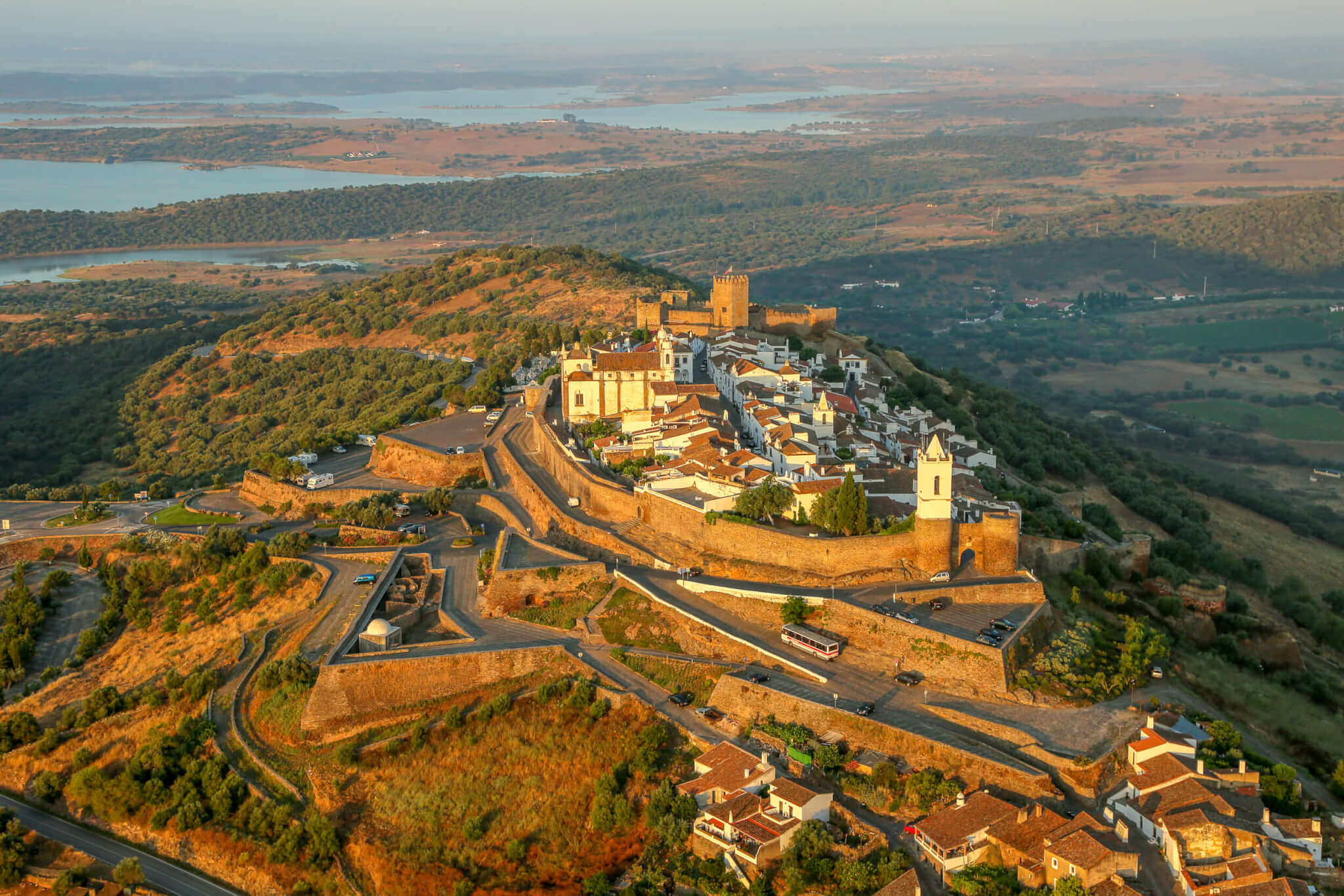 I was expecting it to be overrun with tourists, but on the day I toured — a Monday, don’t go on a Monday — there was absolutely nobody around and most shops were closed.  Here’s a good overview from the Visit Evora website. 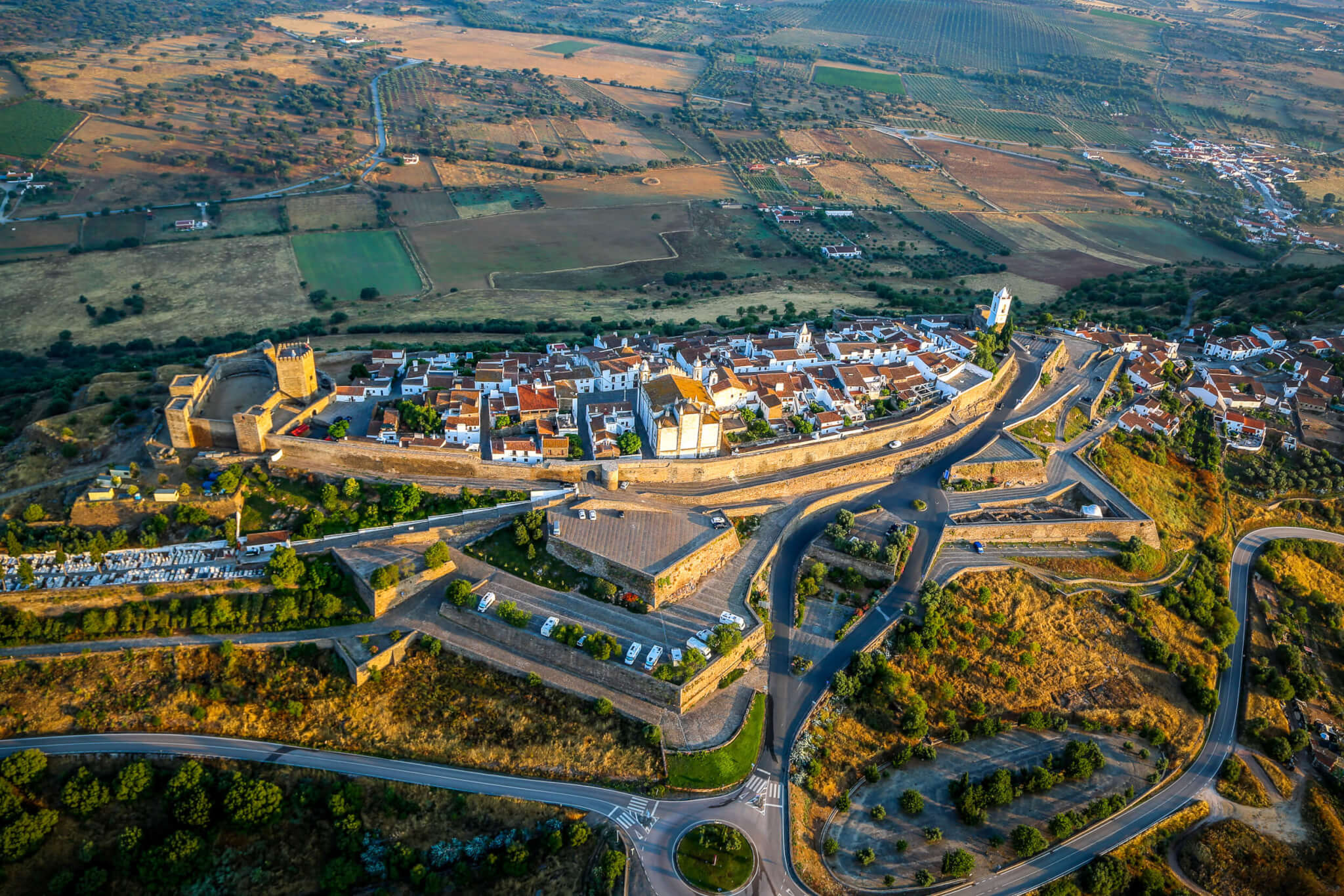 Monsaraz is a fortified town, with high walls and narrow entrances on either end, buttressed by the Castelo Monsaraz on the far end, looking out over the gigantic Alqueva reservoir. It’s easy to park in the lots below, then take a short walk up 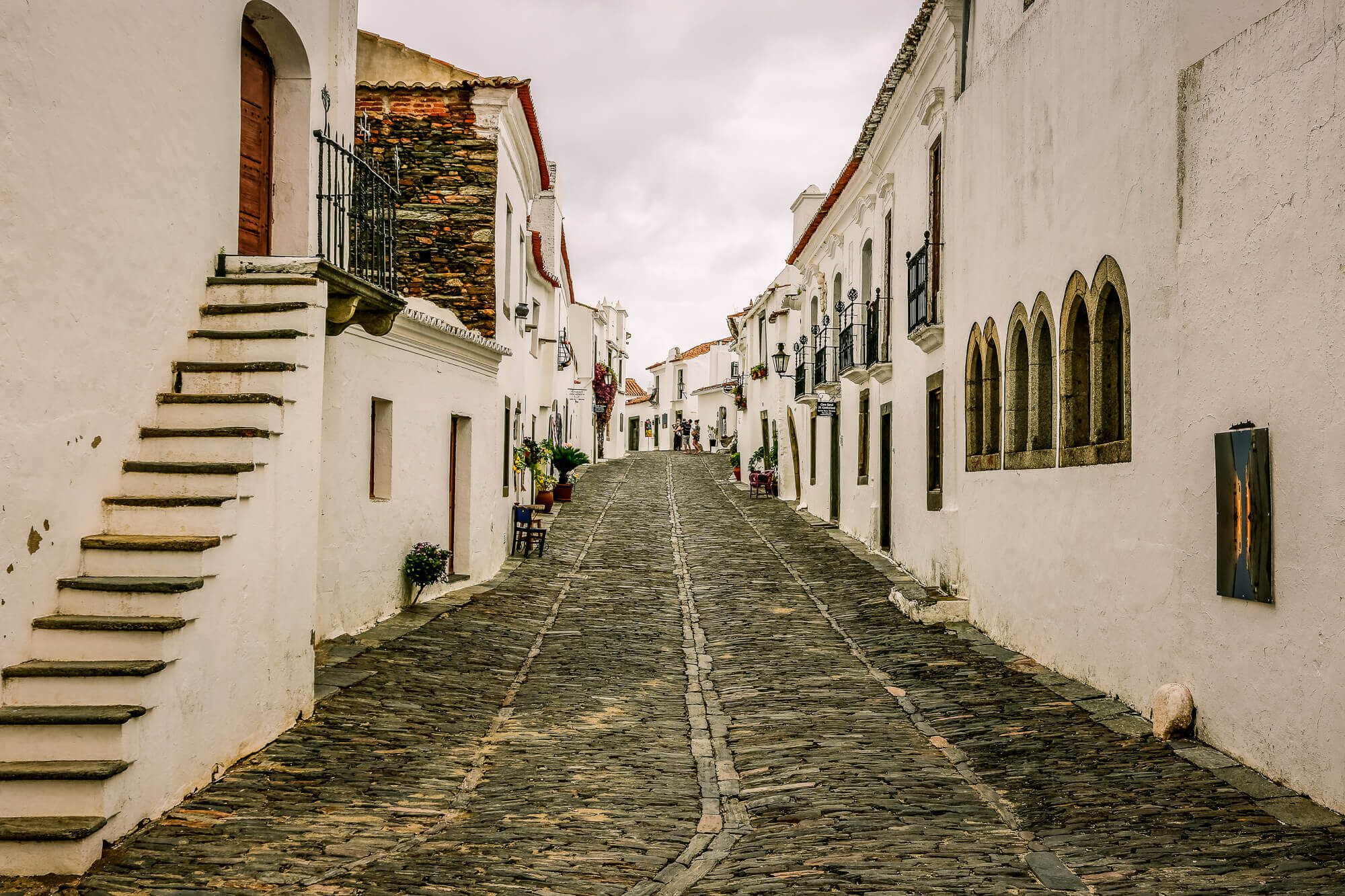 The narrow streets are all paved with the hard-as-nails schist that props this town over the surrounding fields. 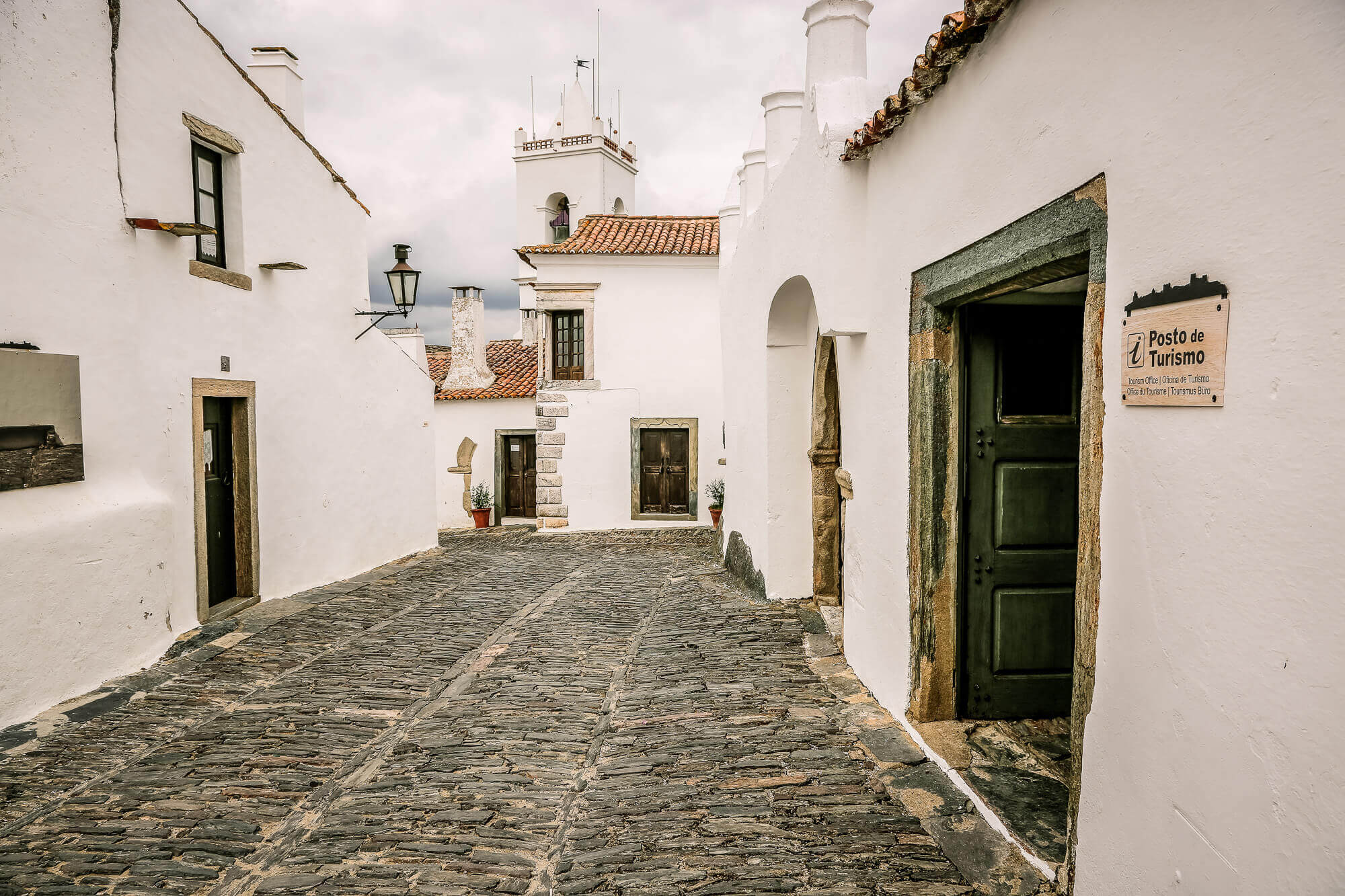 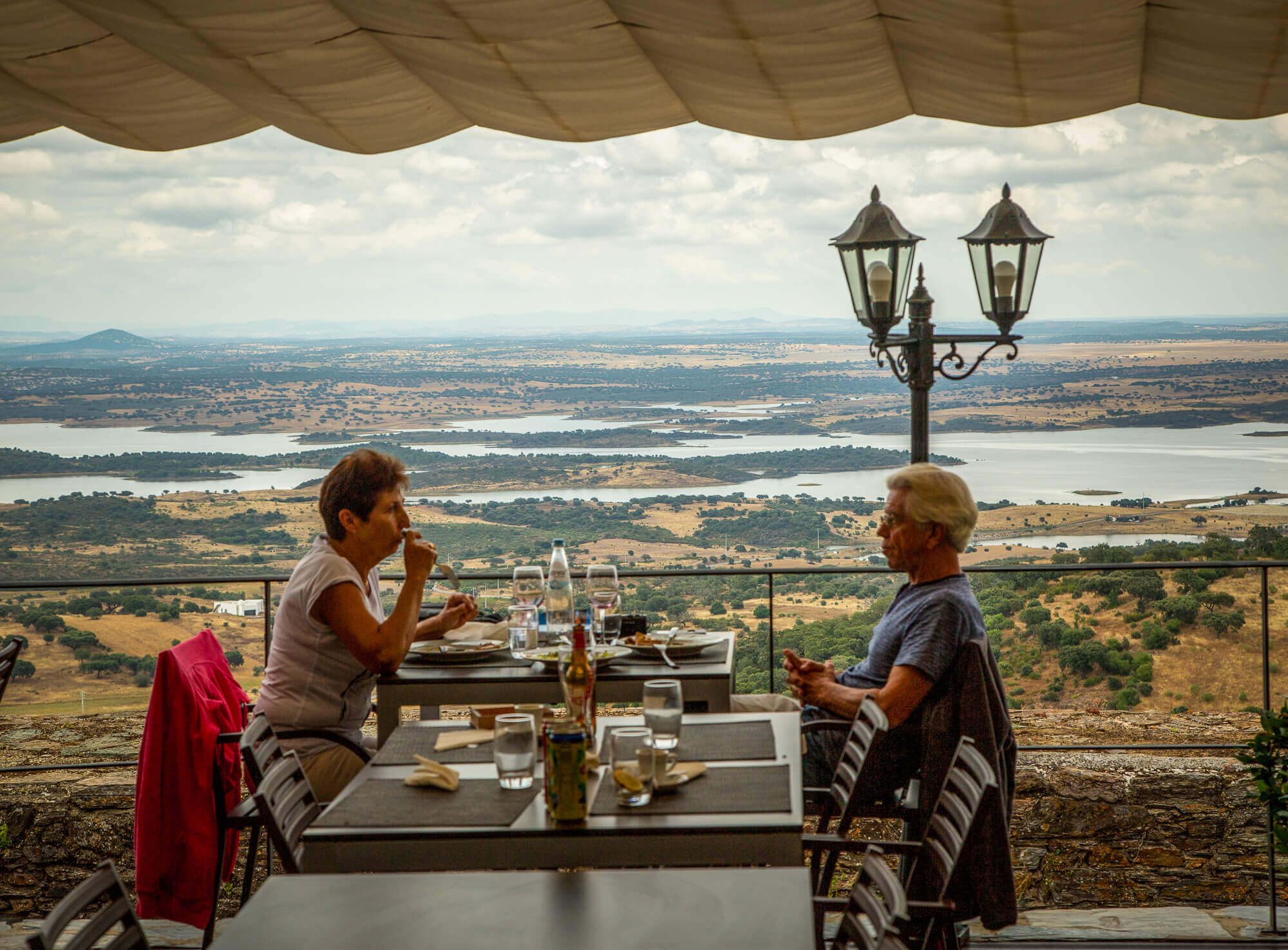 There are many restaurants in Monsaraz with terraces overlooking the surrounding golden fields and Alqueva Reservoir. 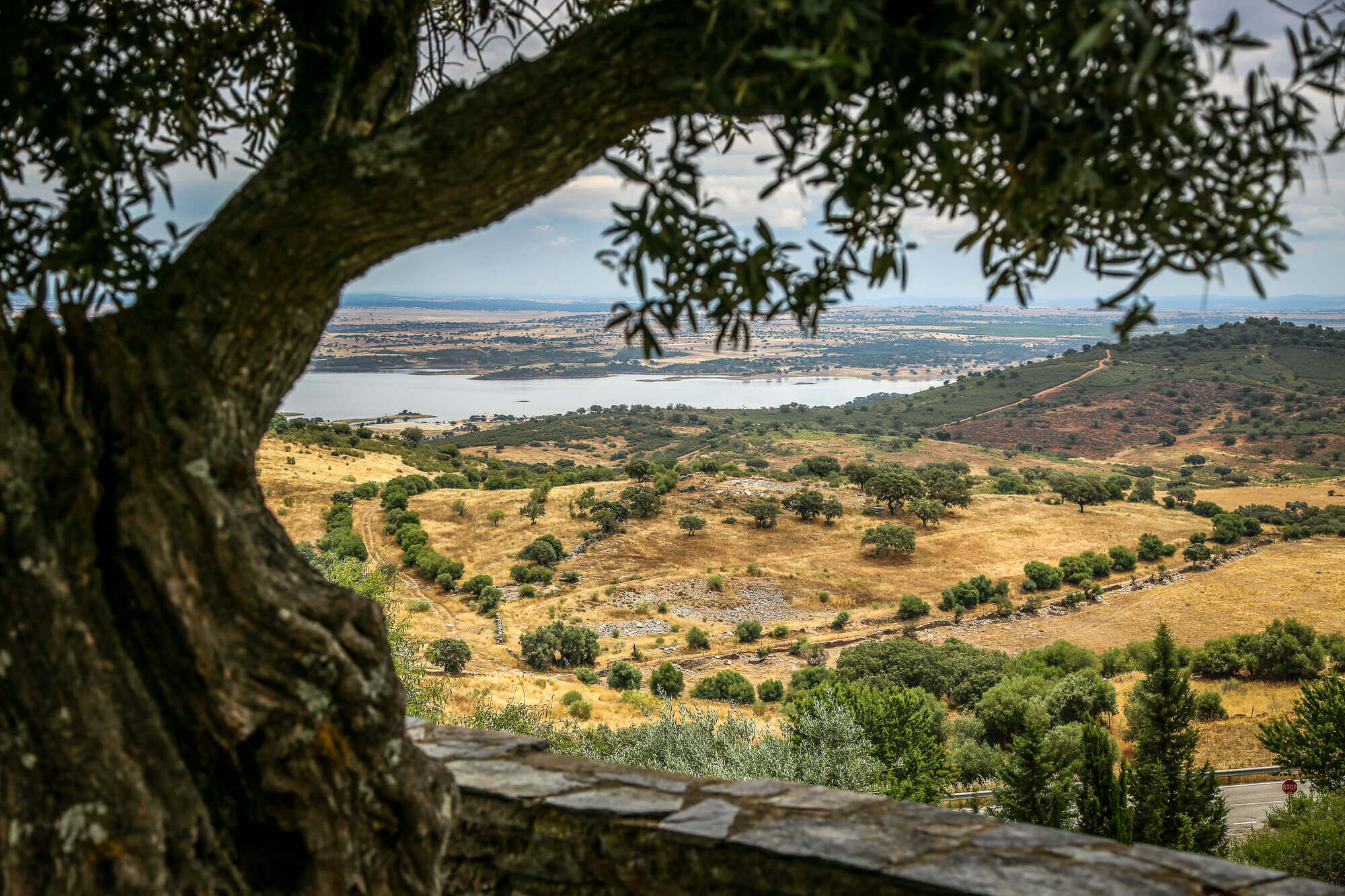 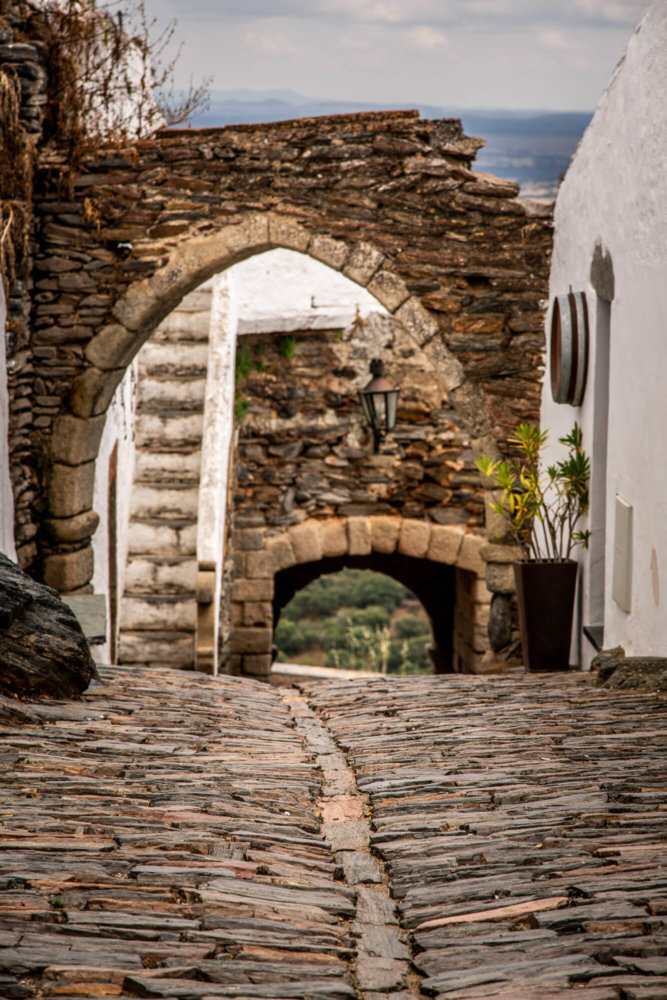 The Castelo do Monsaraz is at the far end of town, built from the same strong schist that props this hill up. 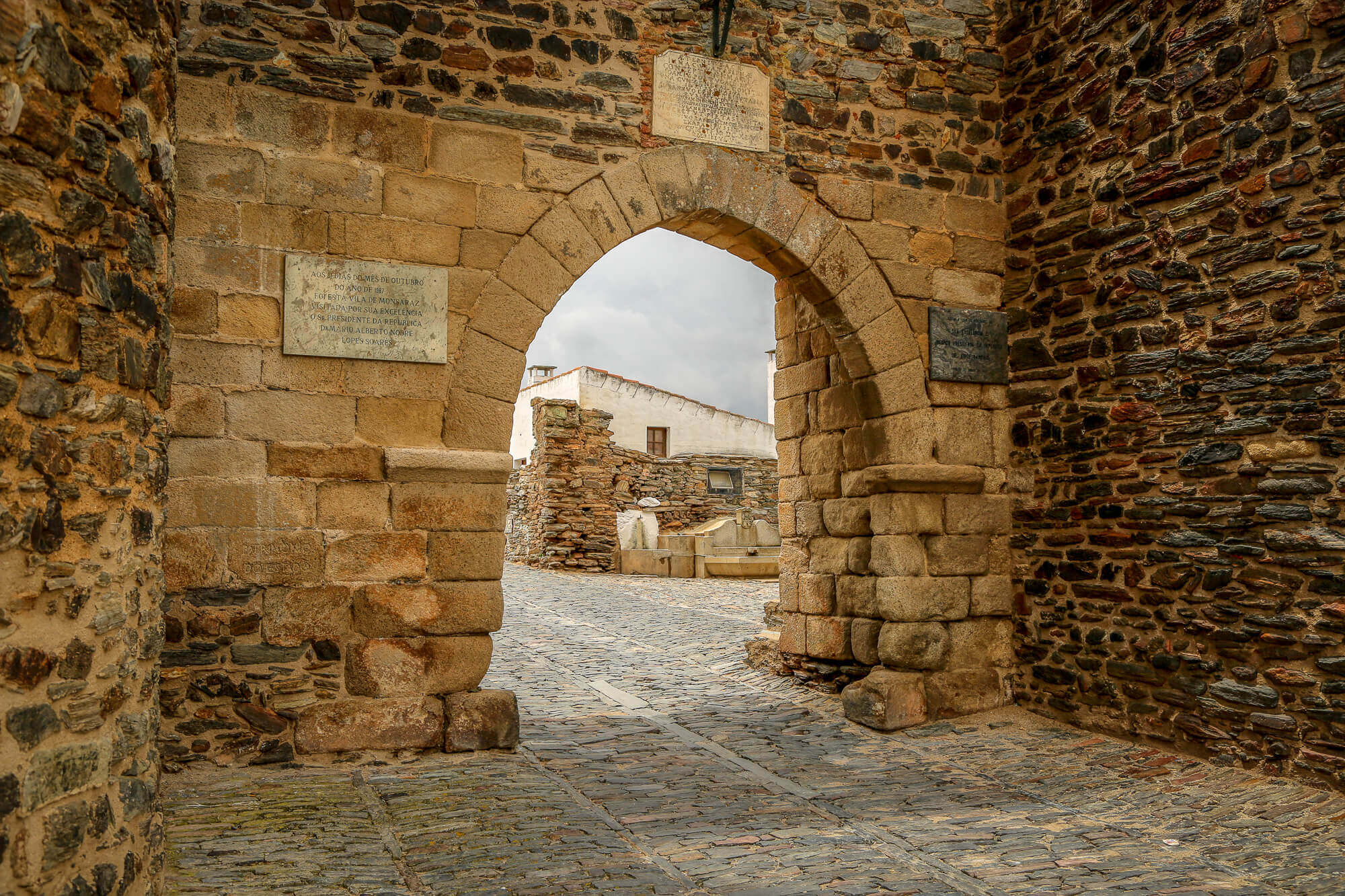 From the castle, you can see the northern end of the giant Alqueva Reservoir — the largest manmade lake in Europe. 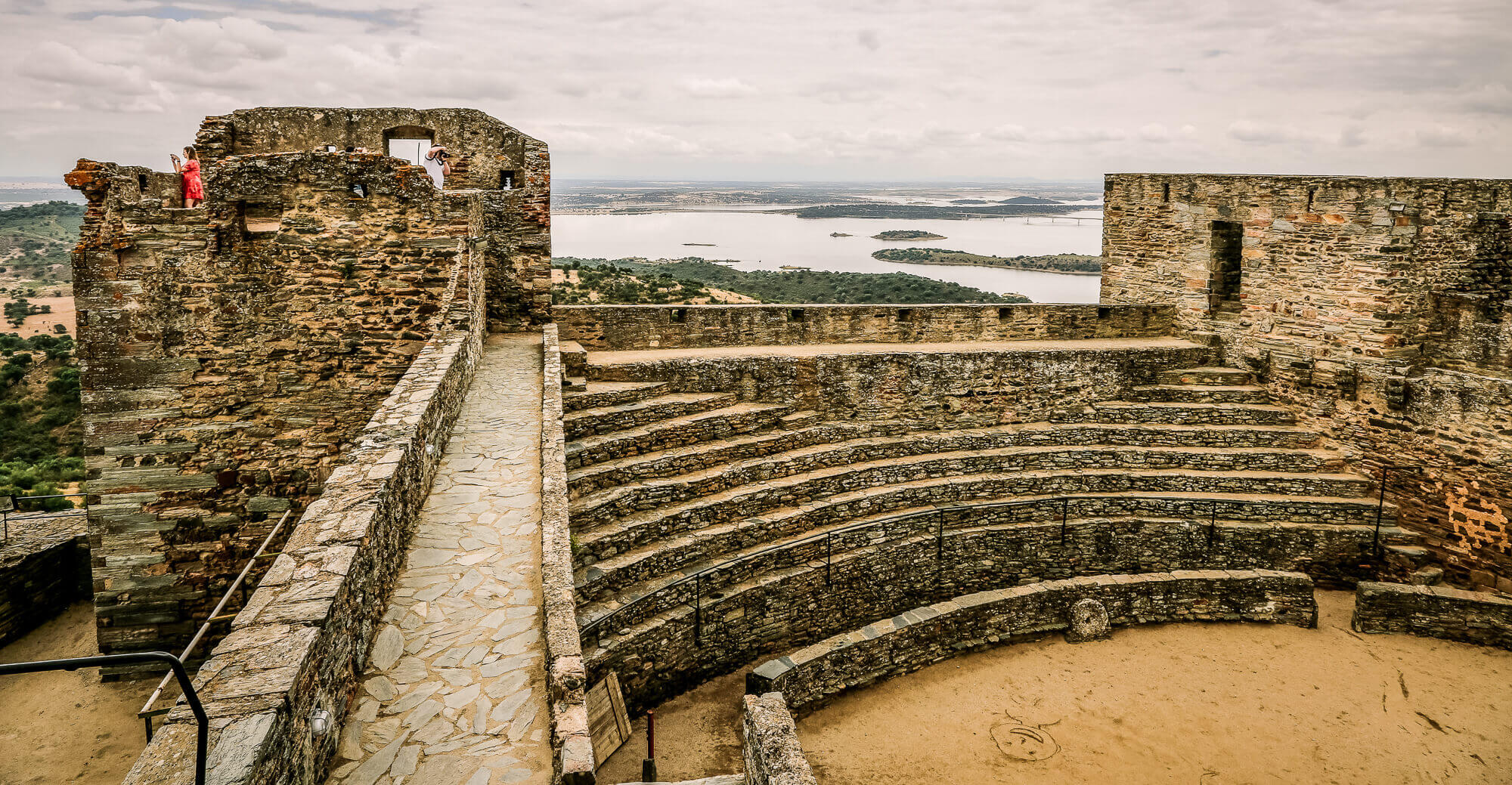 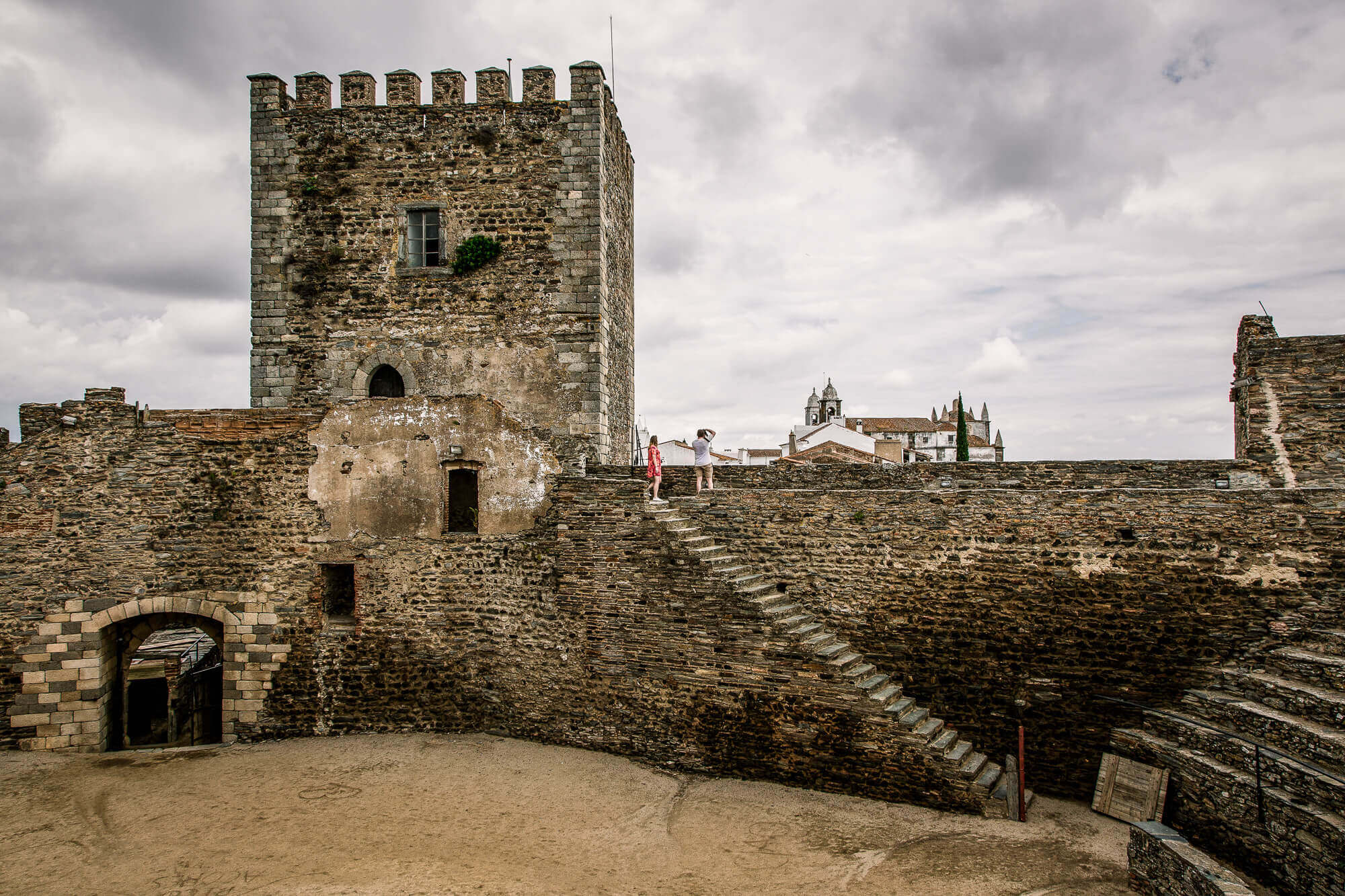 The dreary day I was there, there were hardly any other people in town. 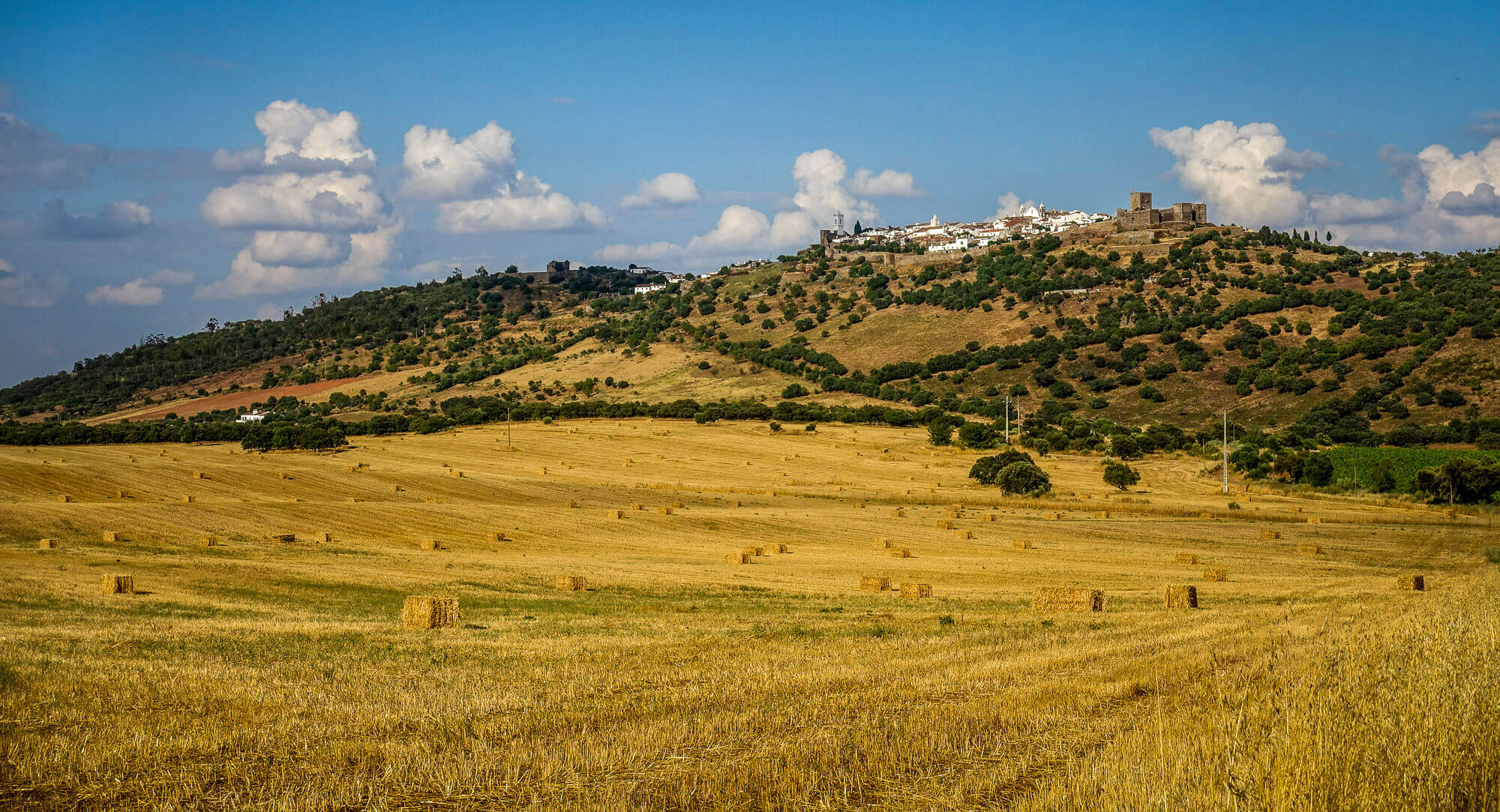 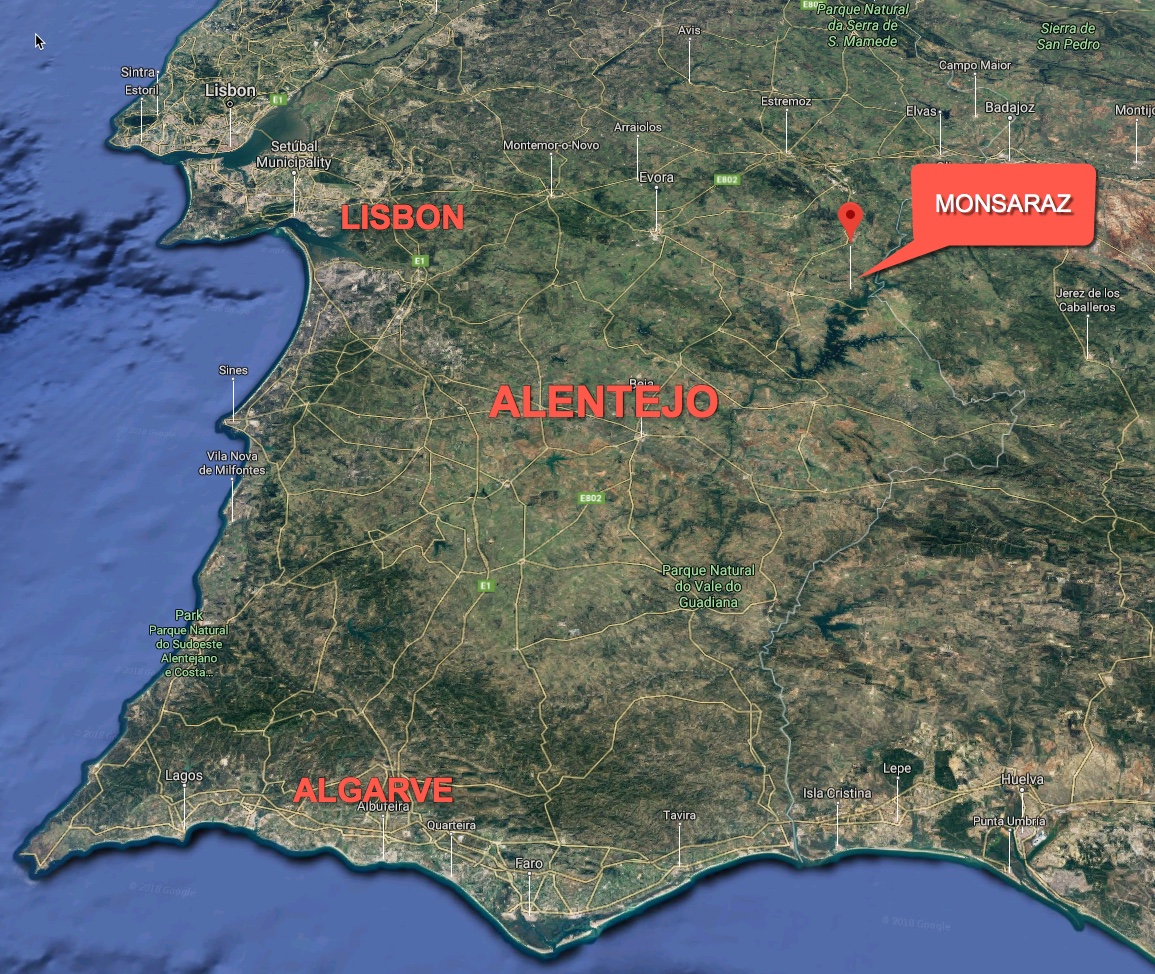 Monsaraz is right up along the Spanish border. From this satellite view you can see how big the Alqueva Reservoir is.

You can take a ballon ride over Monsaraz and the surrounding Alqueva Reservoir greeting the morning sun and floating through the still air. This are is also known for its Dark Skies and has become quite the tourist draw, with an observatory. I wish I’d known that when I was there. 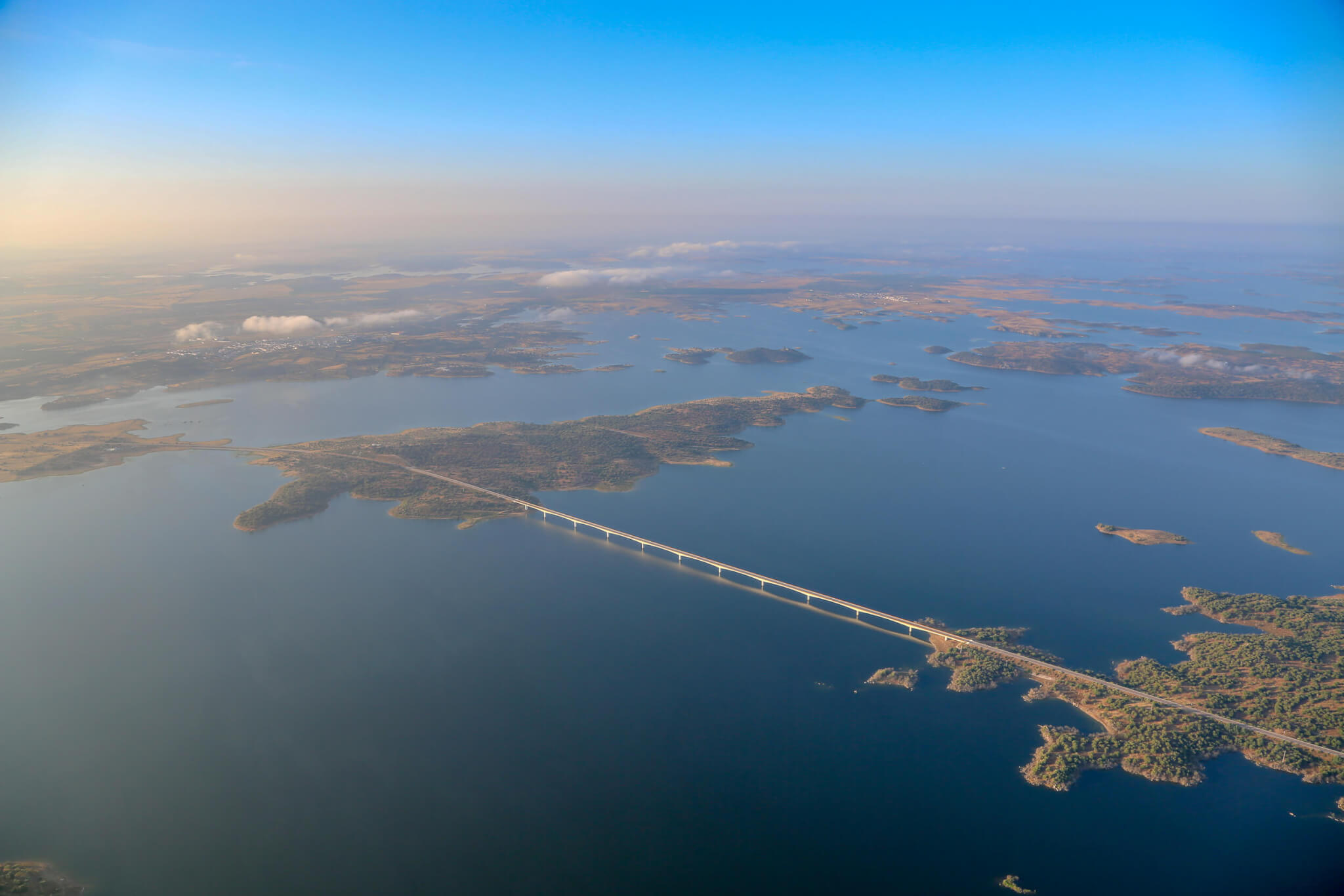 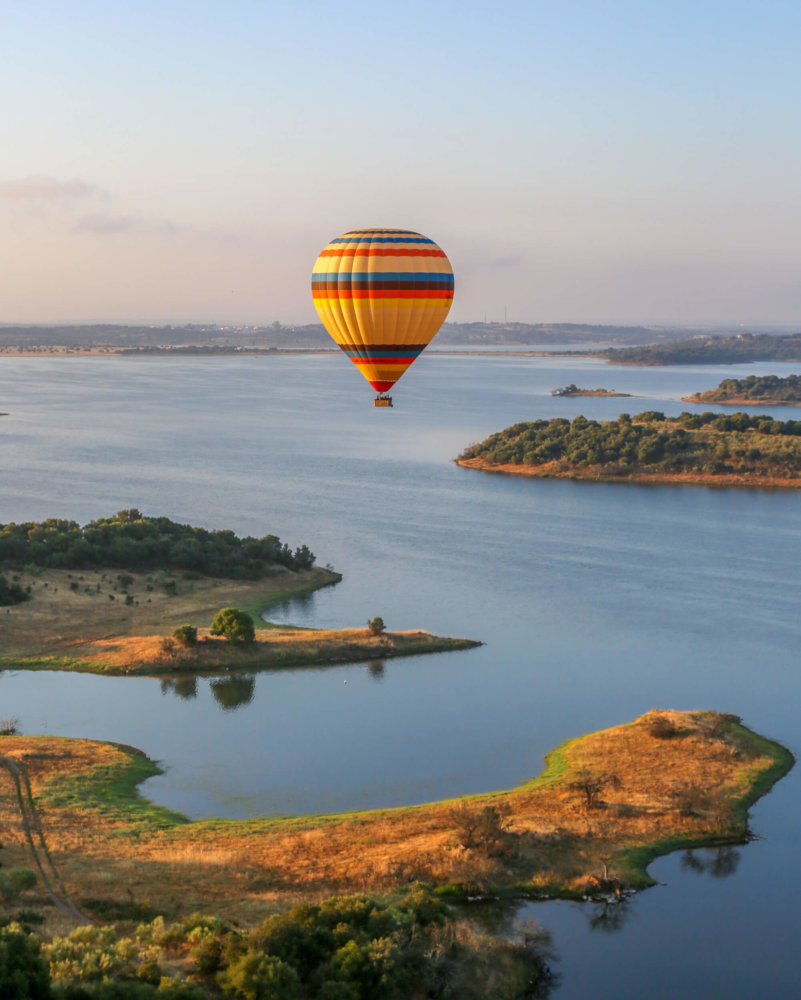 It just doesn’t get any prettier. 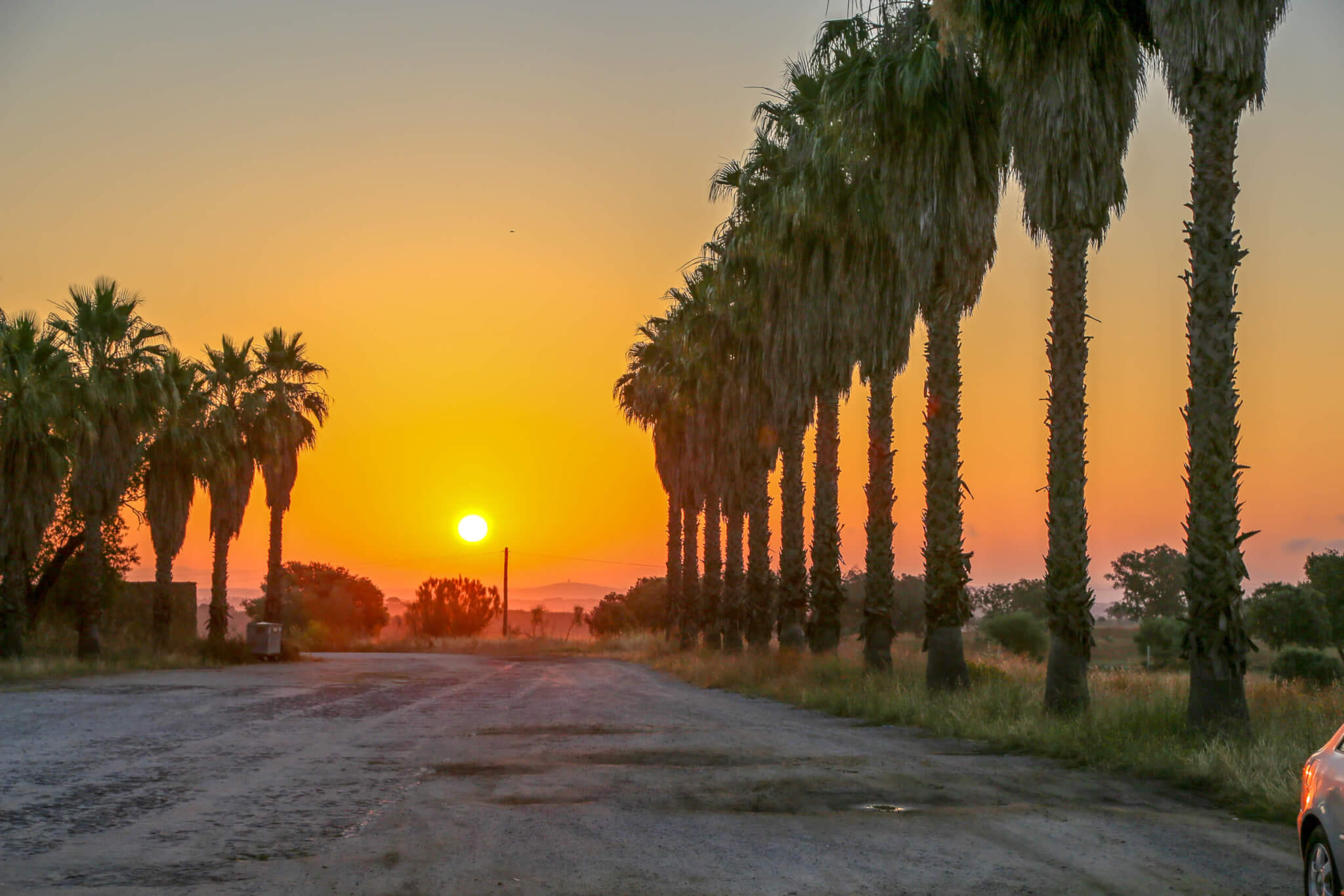 About the most perfect liftoff site there is…