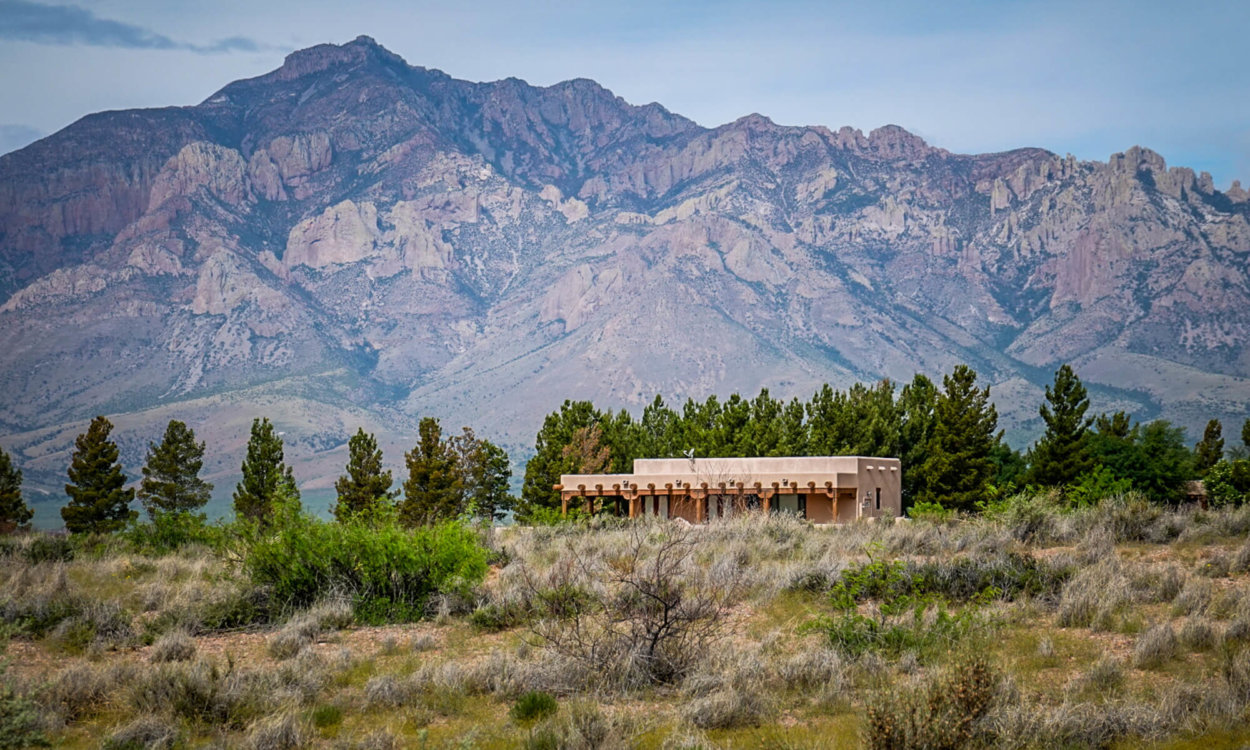 STAY ON A PRIVATE RANCH IN THE NEW MEXICO DESERT

[RODEO, NEW MEXICO] — A coupla weekends ago, I went on a bird-watching road trip along the southern Arizona and New Mexico border with my best college buddies. Three were into birding, two of us were along for the beer. We flew into Tucson and headed straight south, stopping at popular birding spots along the way to Nogales and the Mexican border.  Then we dog-legged left and skirted the border the whole way until we crossed in New Mexico and the dusty town of Rodeo, with watchful Border Patrol hidden around every curve.  We stopped in Patagonia, Tombstone, Bixbee and finally crossed the border in New Mexico to stay at the Painted Pony Resort in the dusty town of Rodeo.

This time of year, this part of southern Arizona skirting the Mexico border is a world class birding destination as all the most exotic birds migrate back north through a concentrated flyway. It was like shooting birds in a barrel (figuratively speaking, birders don’t shoot, except pictures). My friends bagged Life Birds in the high double-digits.

We lucked out by staying at this really cool guest ranch Painted Pony Resort just across the New Mexico border in Rodeo, New Mexico. It was in the middle of nowhere, 30 minutes to the nearest grocery store. 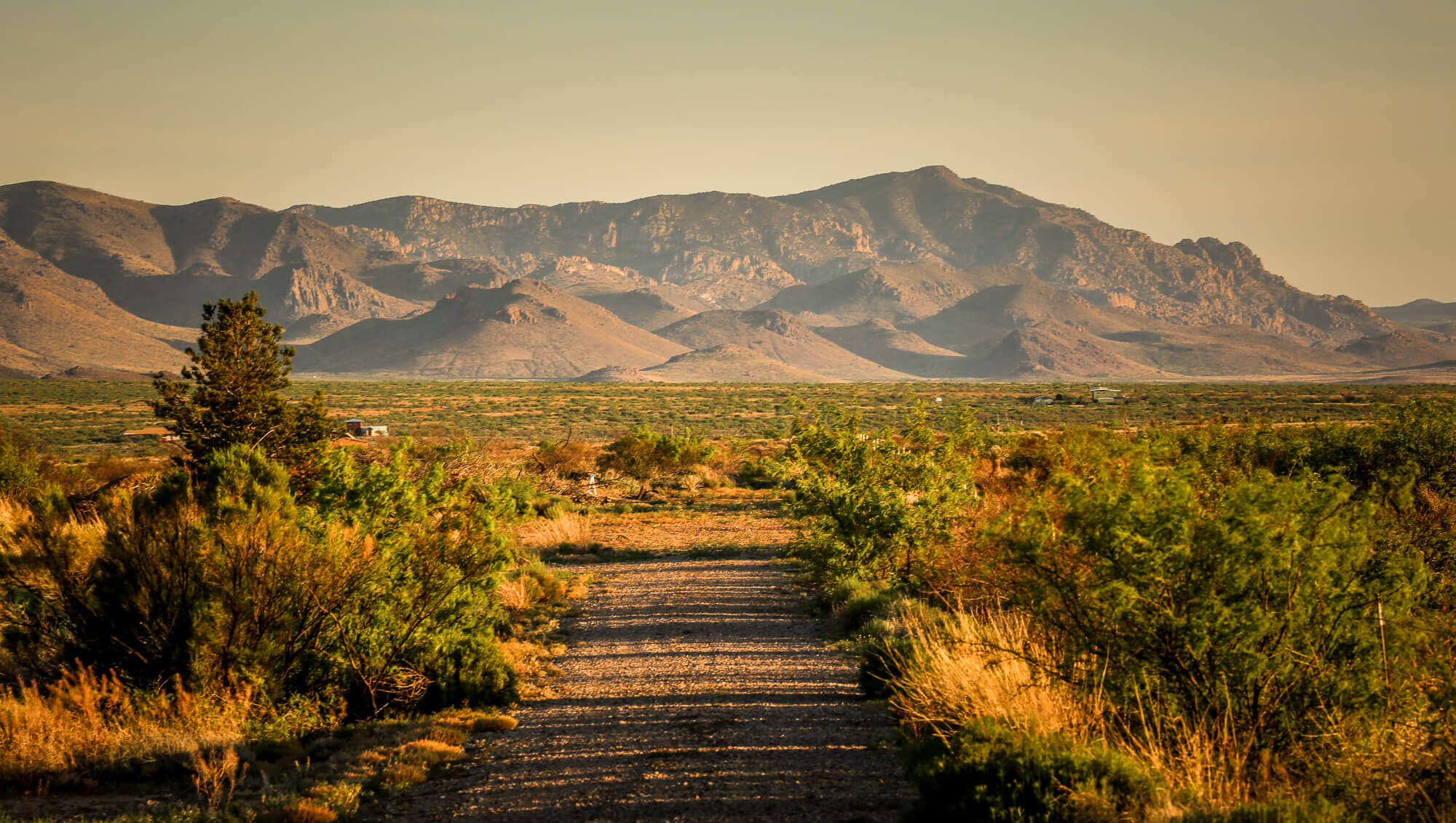 The ranch is location in a flat-as-a-pancake desert just across the New Mexico border, ringed by distant mountains on all sides.

The flat desert spread for miles in all directions, ringed on all sides by purple mountain majesties. This sunrises and sunsets were breathtaking. This area of New Mexico is also a designated Dark Sky Preserve like Chile’s Atacama Desert, so lots of shy, pale star-watchers have places here; big scopes trained to the star tapestry above. (Unfortunately, I still can’t figure out how to shoot starry skies.). But my neck still hurts from looking UP 👆 for long periods of time.

Because of its designated Dark Sky New Mexico status, errant lights are dimmed or non-existent and you’re encouraged to only use flashlights at night. 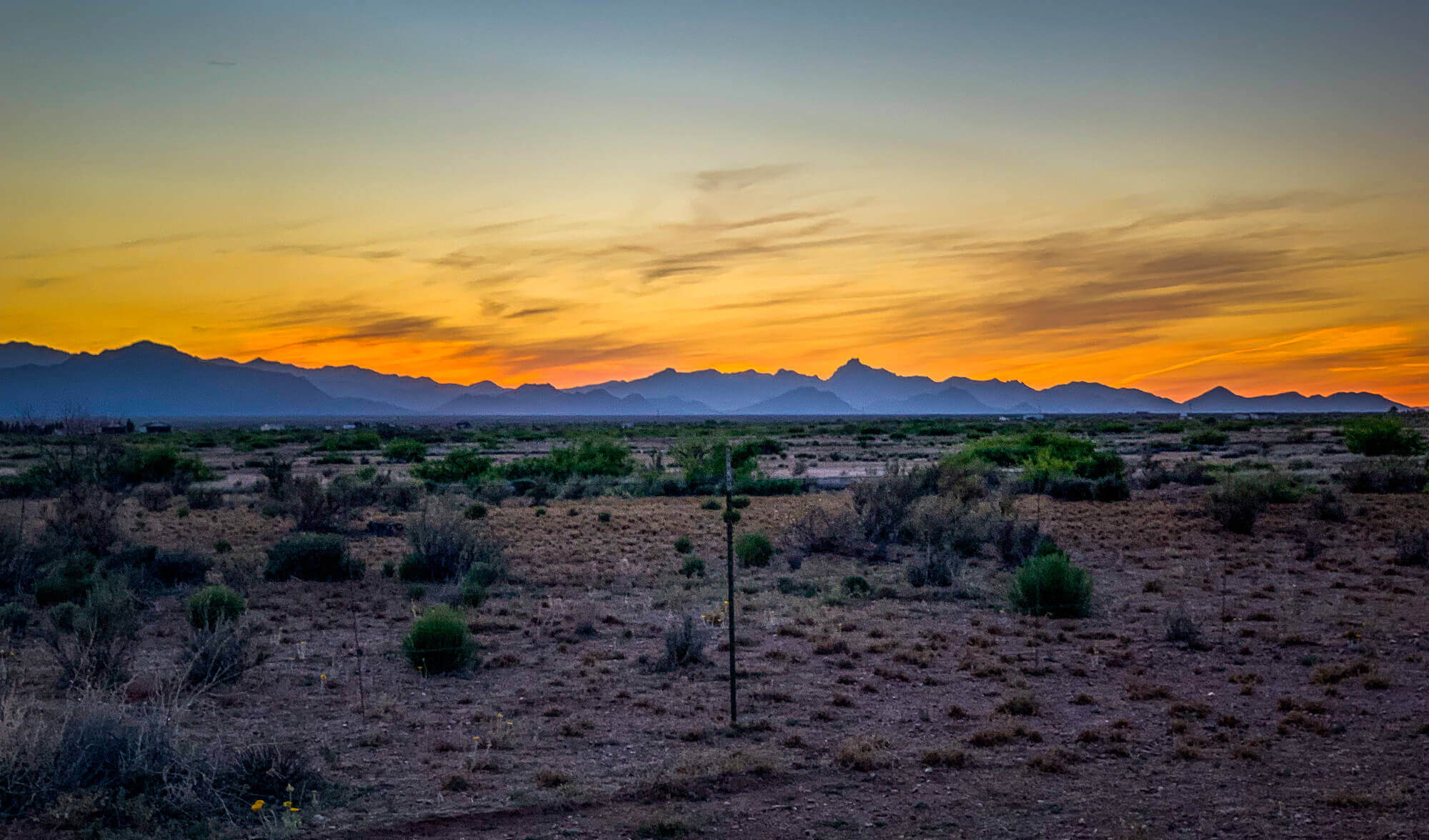 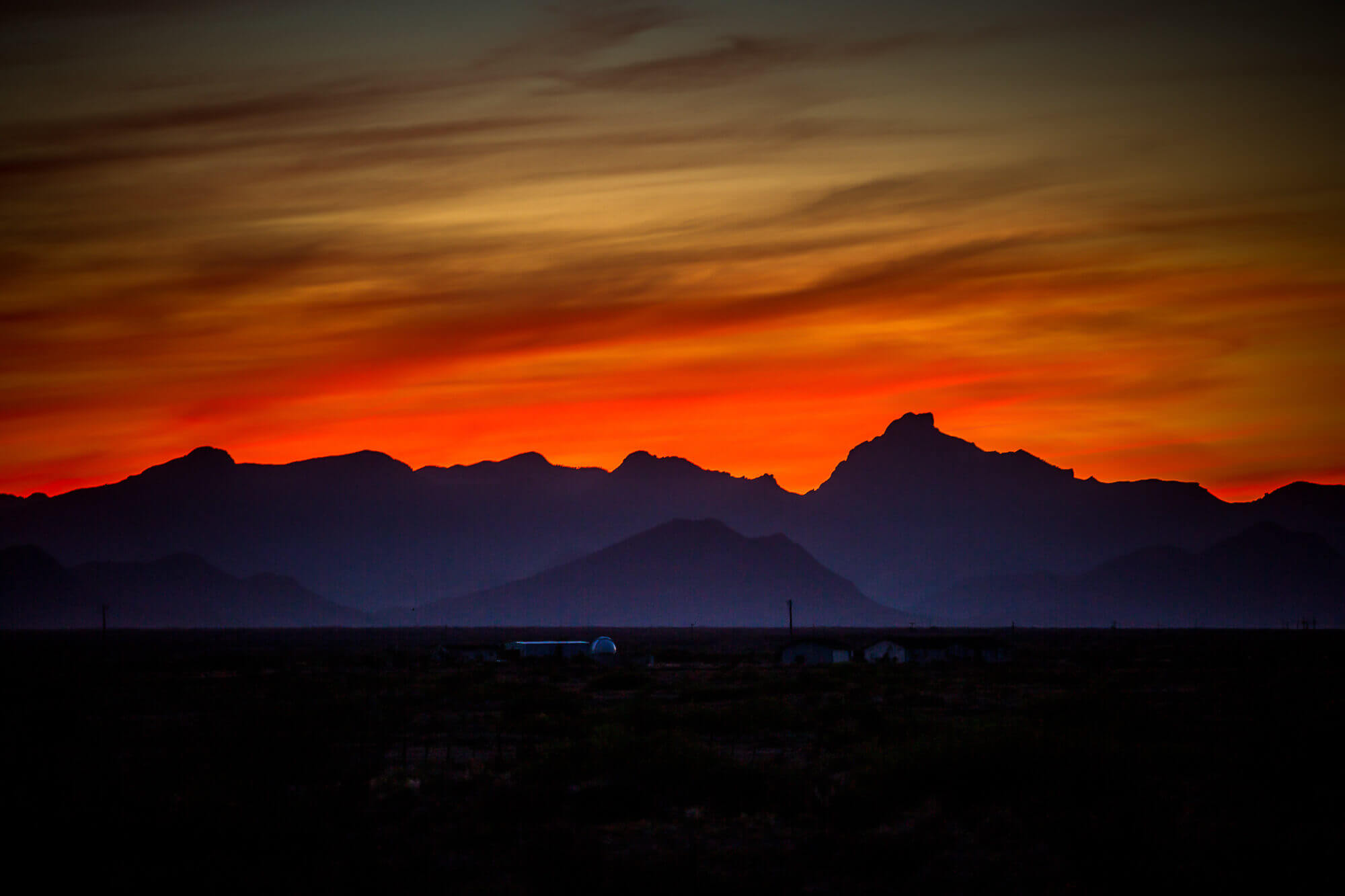 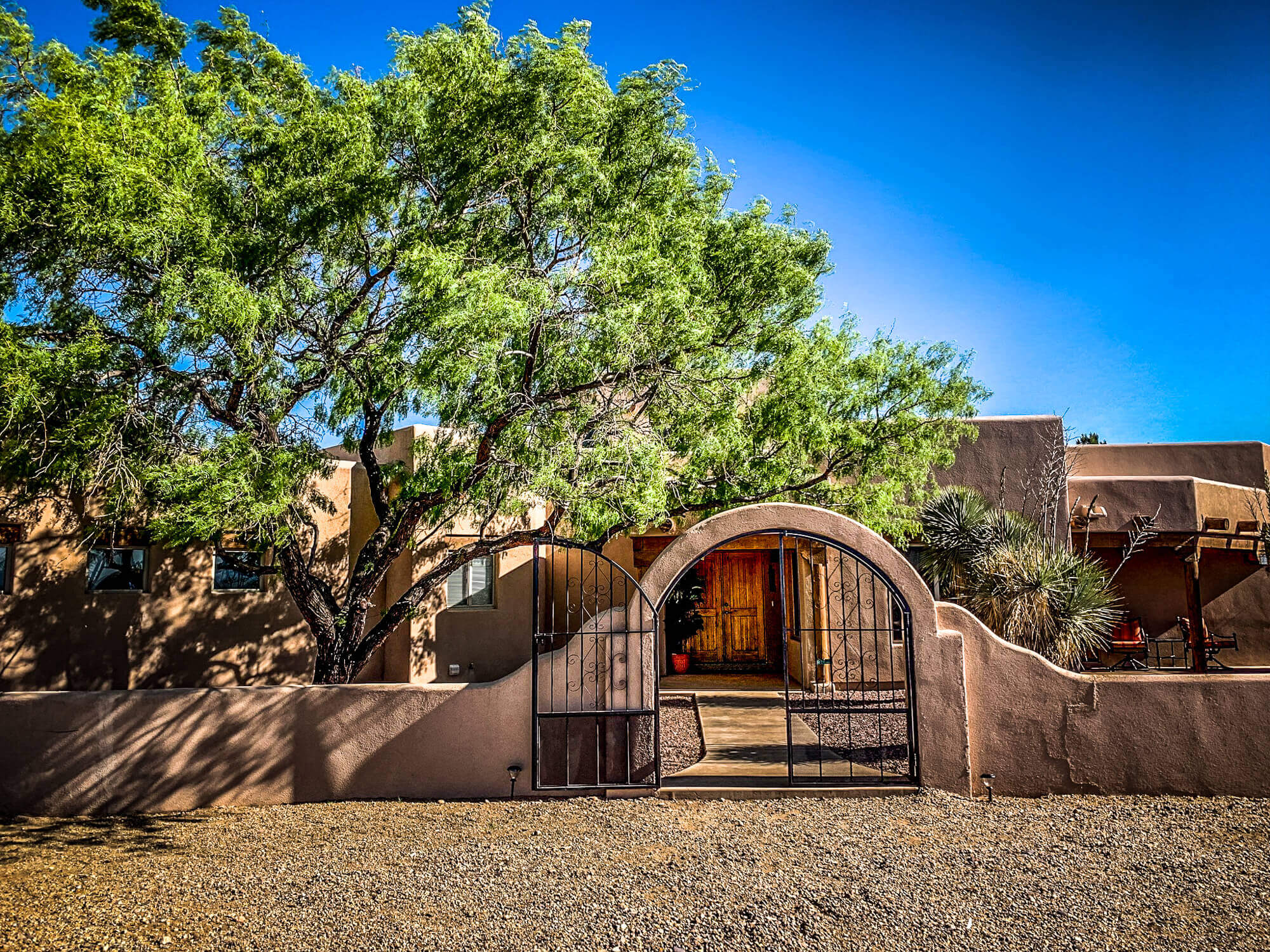 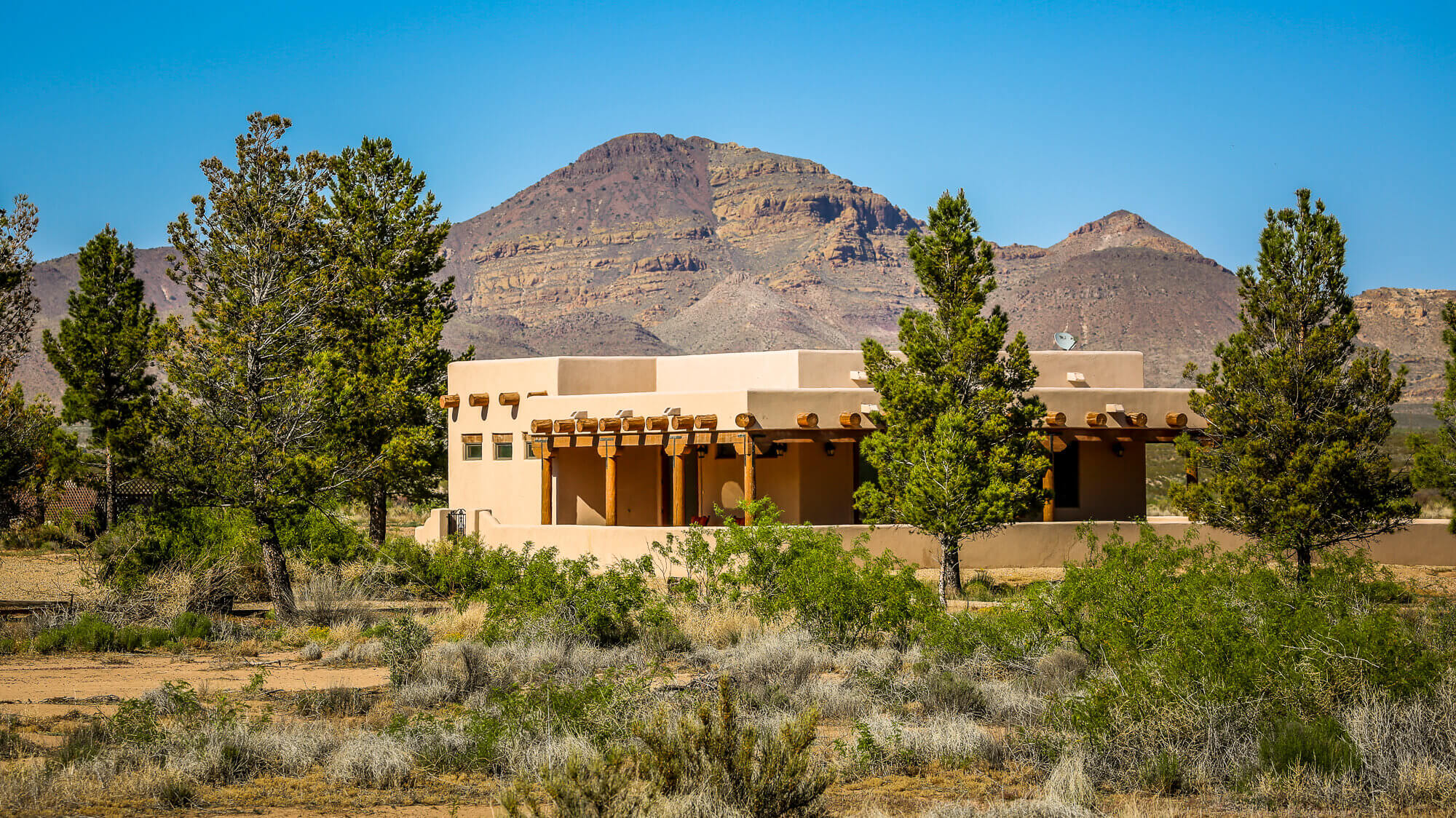 There are several other guest houses scattered across the property, each with its own character. 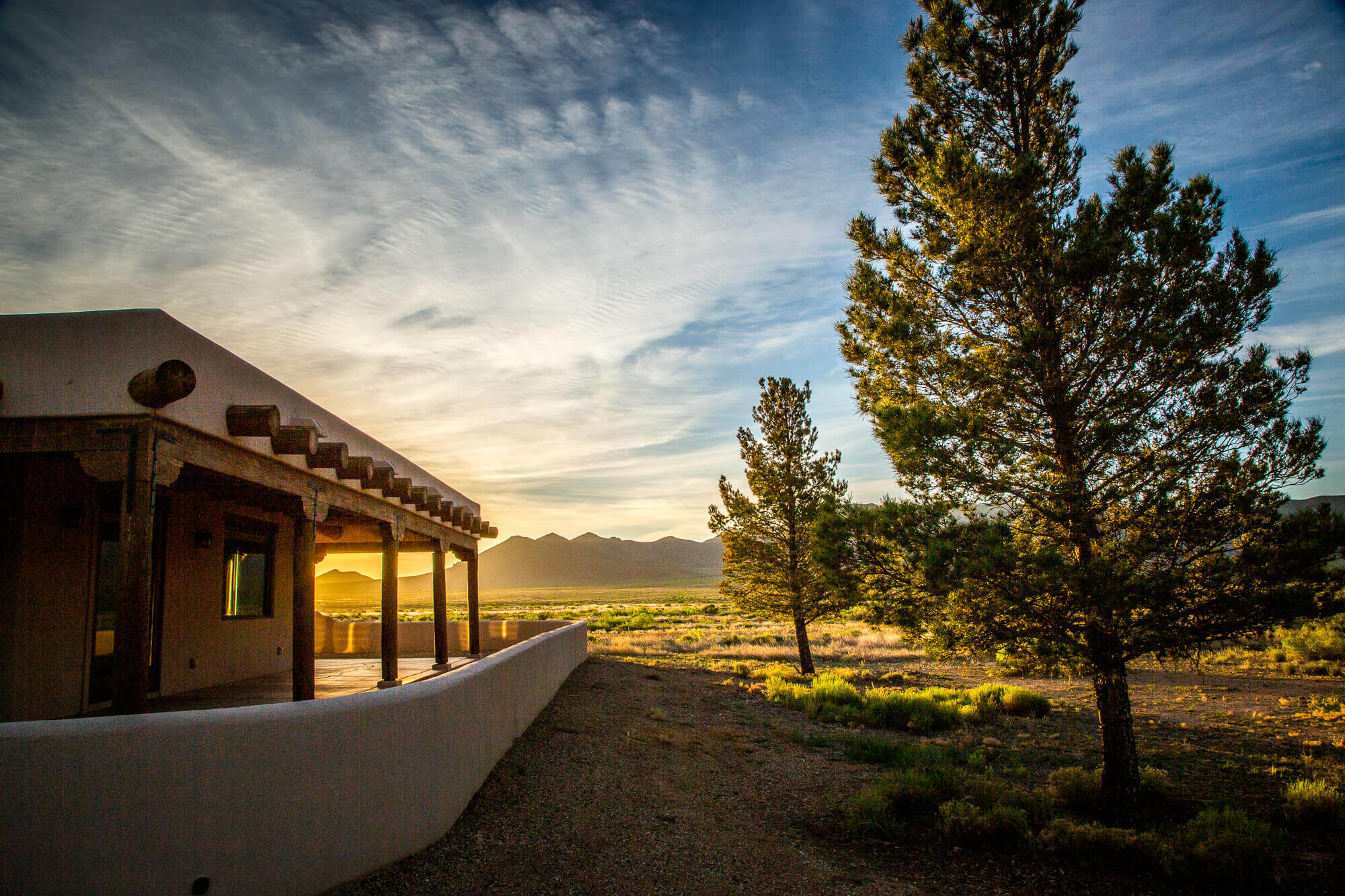 Whether it’s a sunrise or sunset, every view is amazing across the vast desert.

The main house was tricked out with everything you want — a sweet pool with incredible valley views, outdoor grill, a chiminea, a great kitchen, five bedrooms for five dudes and separate houses of all size that can accommodate up to 40 people. It pretty much has everything you need, but definitely need to bring your own food, there isn’t a restaurant or grocery store for miles. 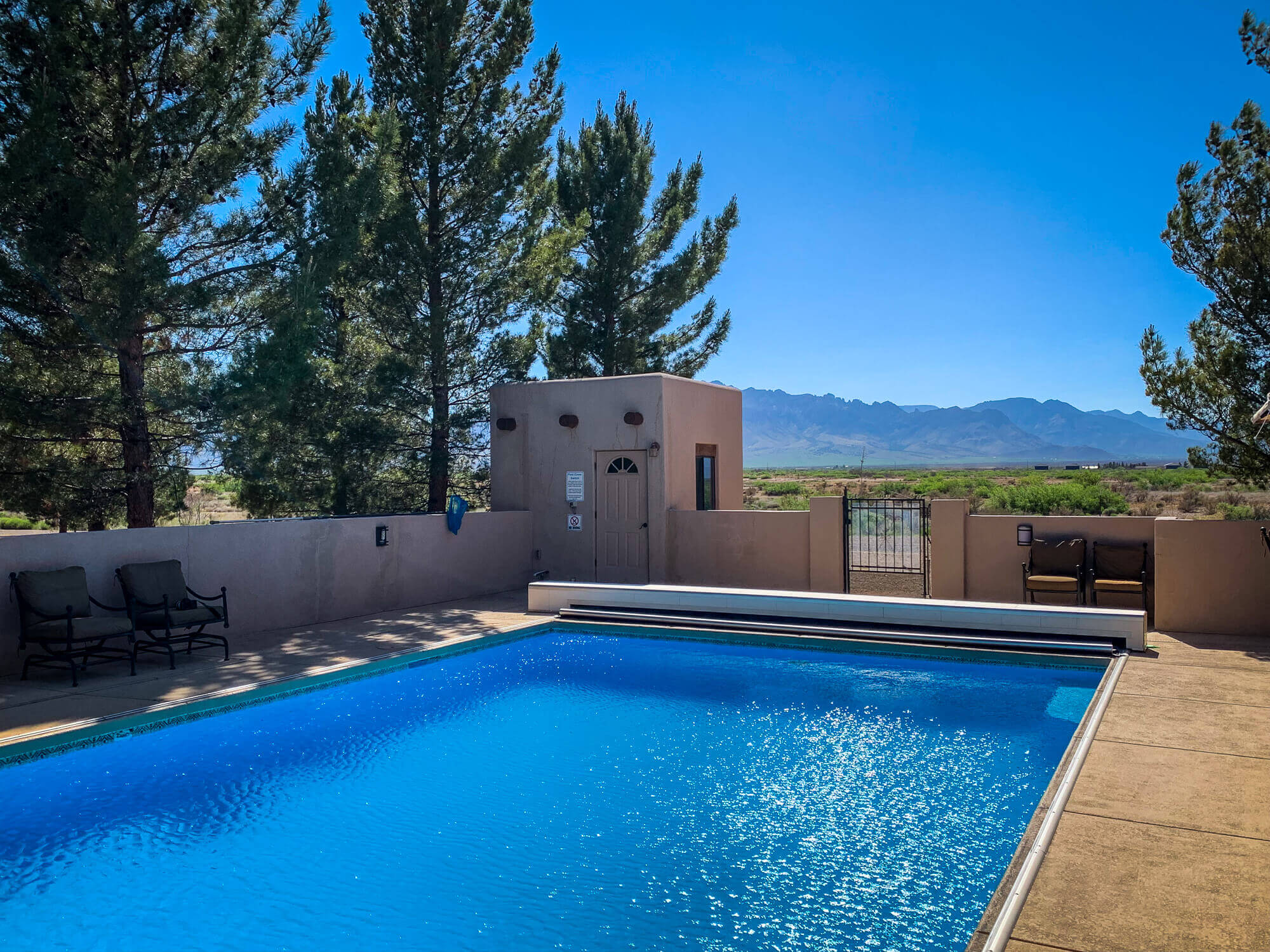 The pool was so refreshing after the long drive down here. Ringed by whistling pine trees and views of the surrounding mountains. 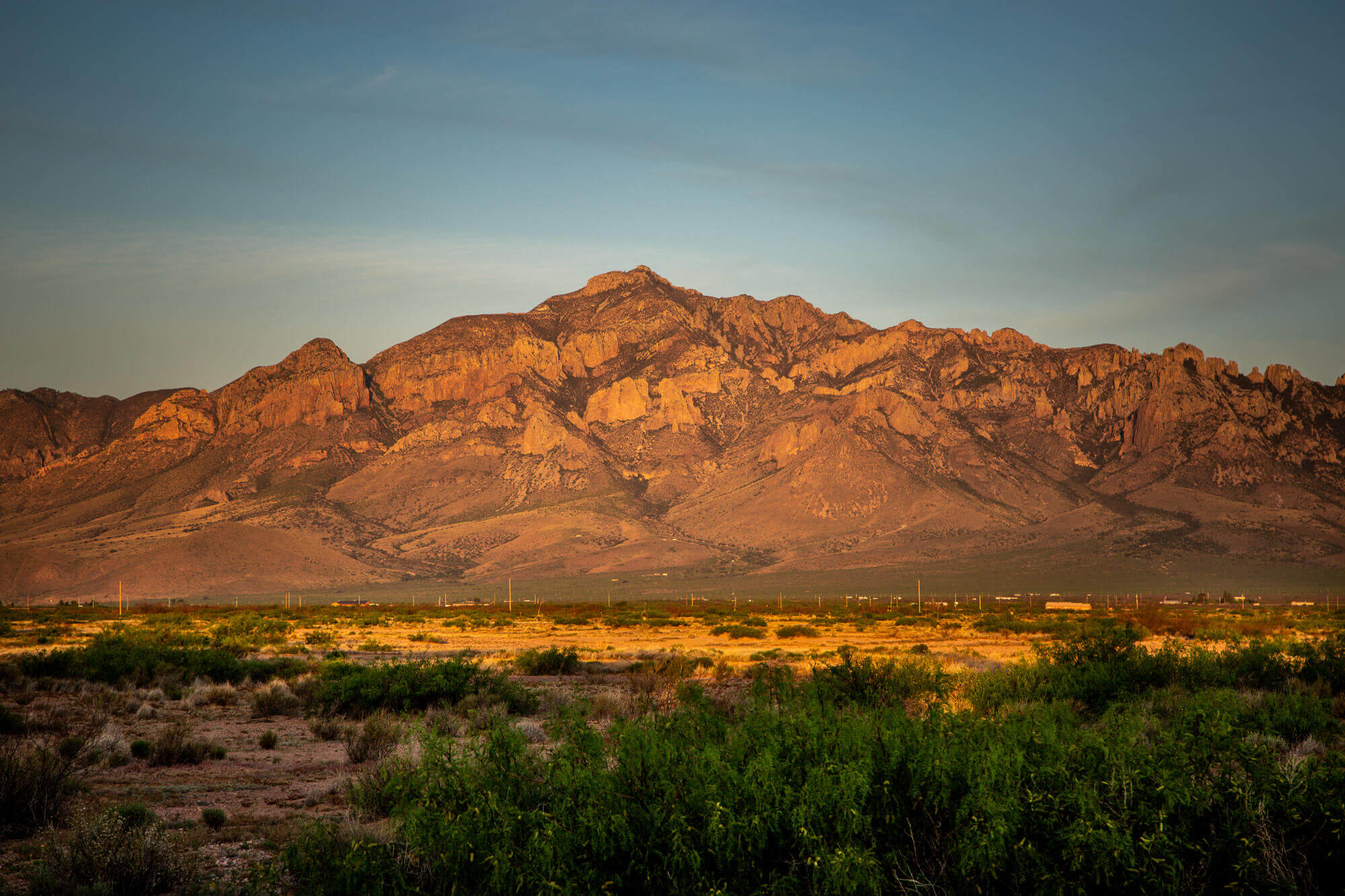 No matter what view you saw last time, the mountains look completely different from sunrise to sunset.

At night, the constant wind completely dies down, one of the quietest places I’ve ever been since The Sahara.

Make sure you get up early to watch the sun rise.

The pink sunrise just lights up the mountains ringing the Vally.

The cool thing is that they reserve the place for one group at a time, whether that’s five guys or forty, so you get the place to yourself without hearing late night howling from others… other than your own.  (We were in bed by 10 every night 🙄).

The main villa rents for about 500 bucks a night, with five big bedrooms, huge kitchen and giant outdoor area. So as long as you pay the nightly rate, you get the whole resort to yourself. 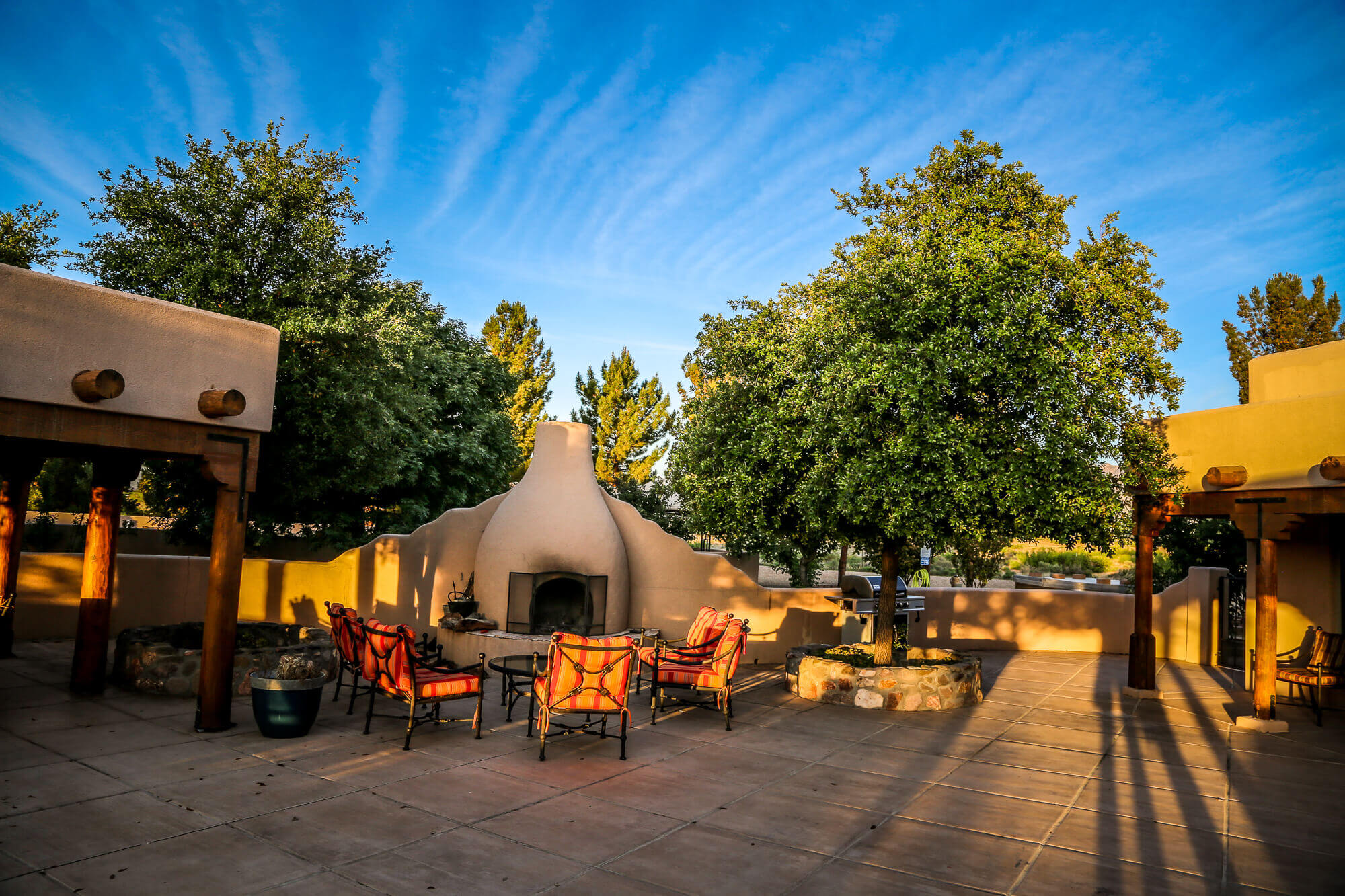 We stopped for a quick overnight in the funky southern Arizona town of Patagonia, known as a Birder’s Paradise and artists enclave. It’s the perfect day trip from Tucson. But we were here for the birds… 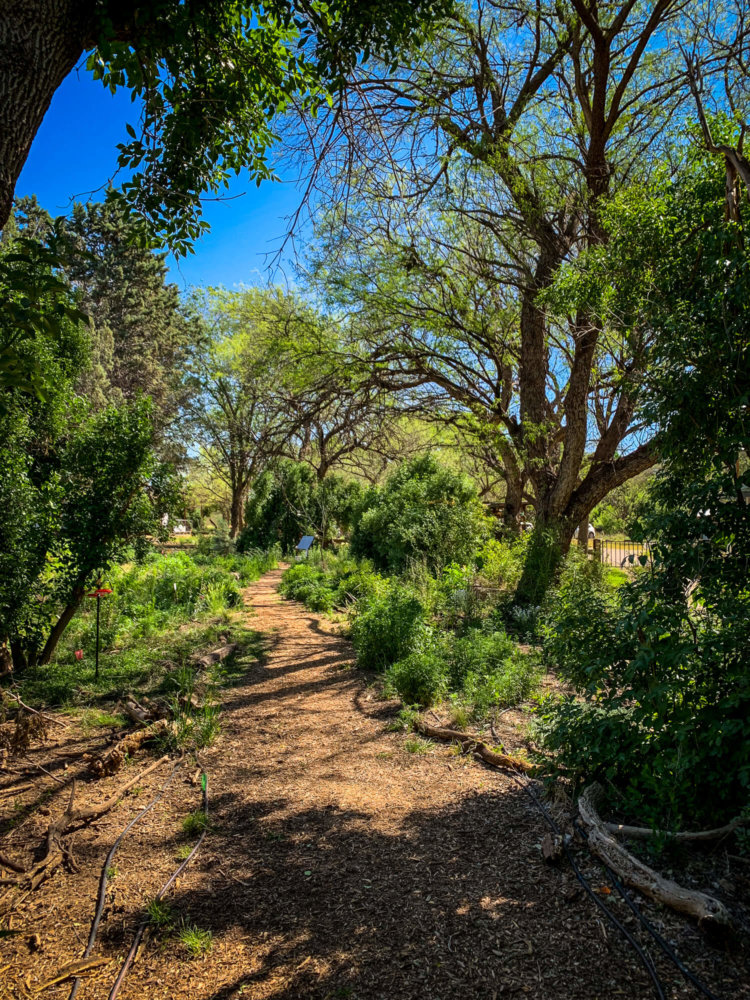 The Paton Center for Hummingbirds in Patagonia Arizona is a world-renown birding center. Once someone’s house with a bunch of hummingbird feeders, it attracted so many exotic and rarely-seen hummingbirds that it became world famous. Eventually, the Tucson Audubon Society purchased it.

Because of its location at the pinch point of north/south migration, birds of every feather flock her to hang out in the cool high desert shade. Also, the nearby Sonoita Creek is one of the few free-flowing creeks in the state, so no doubt the birds have known this watering hole for centuries.

You just sit there and wait for the birds to come in.

Feeders are scattered all across the property, attracting birds of all color in a single setting.

We stayed at the rustic Stage Stop Inn in Patagonia. Once used to house John Wayne and other Hollywood films crews filming Westerns in the nearby hills, now it houses tons of birders and bikers.

Along the route you can stop in historic Bixbee Arizona. Great lunch stop at the Bistro. 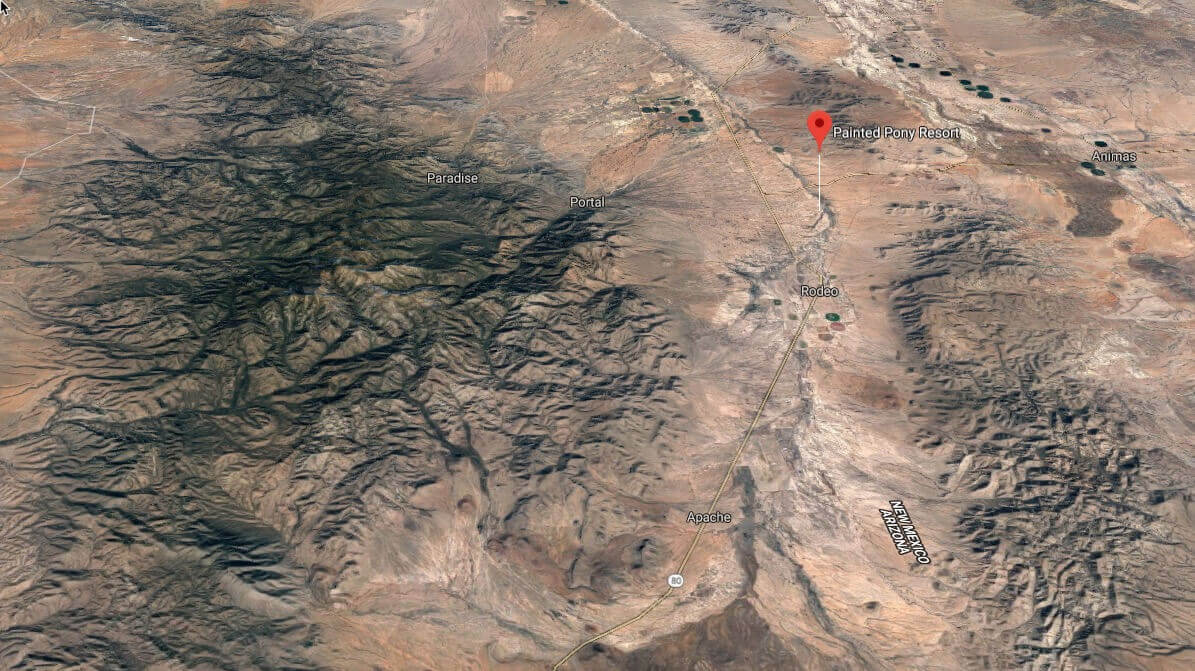 The Painted Pony Resort is located just across the New Mexico border in the small town of Rodeo. You are literally skirting the border with Mexico. One of the least visited national parks is just 20 minutes away.

The resort can sleep up to 40 people, scattered across several free-standing houses, with one main five bedroom villa and pool serving as the Main House. The closest grocery store (if you can call it that) is about 30 minutes away, so bring your own food from one of the larger towns before coming into this vast valley.

Here’s their website. And a video. And a backstory to the place — we had no idea this place was once owned by crazy John McAfee. Here’s a page on the Dark Sky Preserve in New Mexico.

Here are some sites about bird-watching in southern Arizona. The Patagonia-Sonoita Creek Preserve. And a great article on the world-famous Paton Center for Hummingbirds in Patagonia.

Continue reading...
9 Discussions on
“STAY ON A PRIVATE RANCH IN THE NEW MEXICO DESERT”