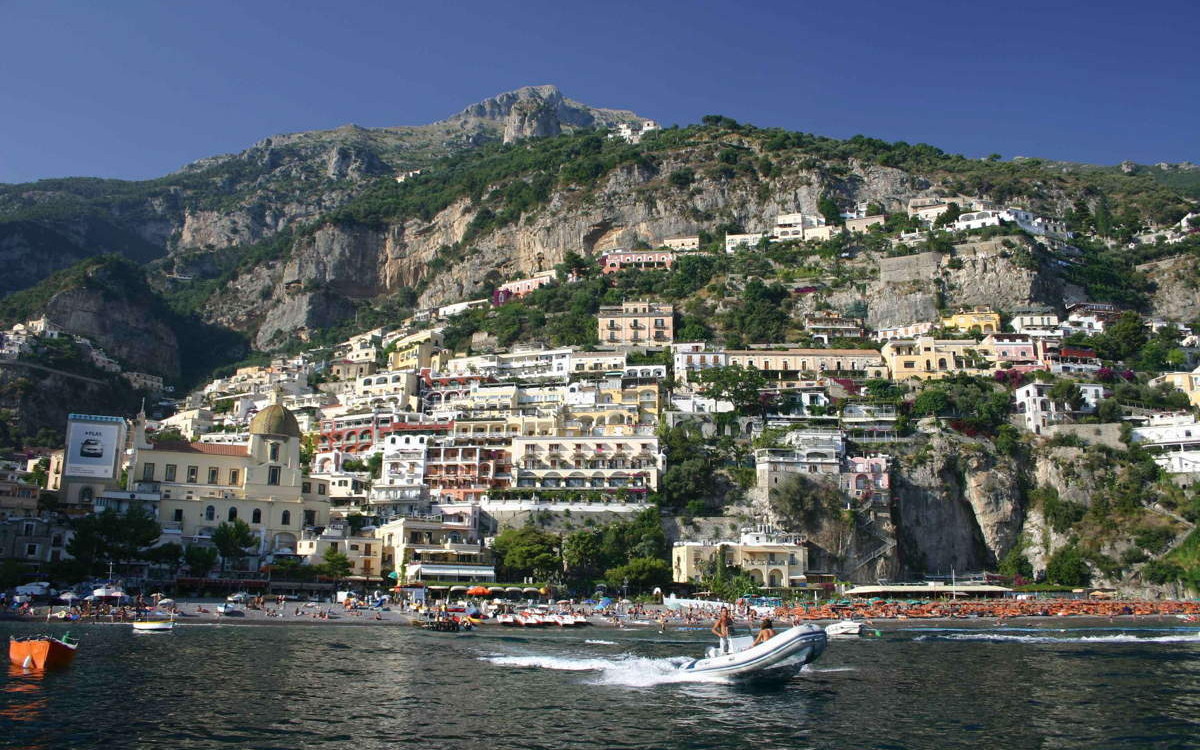 MOUNTAINS ROLLING INTO THE SEA Positano — Every street, every room, every window…there’s a view.

The whole Amalfi Coast is a string of towns south of Naples, roughly starting from Sorrento on down.  Each has it’s own charm and personality. Not a big fan of Sorrento, more of a modern city that cruise ships and tour buses visit.  Keep going down farther, starting at Positano.  Positano is almost all about hotels and restaurants, not much else going on except lemons and pottery with lemons on it. You come to rest and look out over the sea, then eat.

All of Positano is built on a steep cliff around a V shaped cove, with one main road that zig-zags from the top to the bottom, then back up again. The rest is just steep steps connecting each level.  The beach and main commercial/restaurant area of the town is at the bottom.  All of Positano is about where you are on that zigzag road.  At the top, you have amazing views, overlooking what’s below. The rule of thumb, for the most part, is the higher up, the cheaper the hotel, but the better the view. So during the day, you sun on your pool, then take the shuttle bus or walk down the hill to eat, shop or go to the beach.

Steps. You will think about steps a lot.  There are cool steps that cut through each layer of town, down to the sea. But then there is a lot of Up on the way back.  You’ll get it. It’s cool.  It’s a touristy city, but not bad for one.  The best part is that the scary drive along the coast and tight turns, limits a lot of tour buses. No harbor means very few cruise ships.  So it all kinda works. Delightfully.

It’s like Stadium Seating, but with pools, houses and the sea.

You gotta rent a boat. That’s it. Simple and easy.

It’s cheap and easy to rent a fishing boat at the beach. Just throw on the outboard and you can go up and down the calm coast with no fear. And get to beaches you can reach only by boat. You have to do this. Everything looks different from the water.

Steps. Did I mention steps? If you’re not on the only road through town, your going up steps.

When you’re out on your own boat off the Amalfi Coast, bobbing and weaving to the sing-song of the gentle waves, you almost feel like you’re filming your own sequel to The Talented Mr. Ripley. You gotta boat. An animated, perfectly tanned Italian skipper. The babe in bikini and cute hat. Crisp vino. The views. Roll camera! Except, I’m not Matt Damon. Certainly not Jude Law… but then again, I don’t have to look at me, I’m looking at This… (Wait. That analogy doesn’t work so well… I meant the first part of the movie! Not when it gets whacked. And definitely not the murder part…the fun wine, jazz and steamer trunk part… when Dickie and Tom were fun, before creepy. That part.)

This is the way to see the Amalfi Coast. In your own boat. After spending all day on the water, you go back and have Positano for dinner. Deeee-lish. I can just hear the engine sound now : m-m-m-m-m-mmmuuh.

Hard to think of a prettier place than Positano.

This is the way to see the Amalfi Coast. In your own boat. After spending all day on the water, you go back and have Positano for dinner. Deeee-lish. I can just hear the engine sound now : m-m-m-m-m-mmmuuh.

All of Positano is built up the two main hills. Where you hotel is on the hotel makes all the different. The higher, the better views. But also the more steps you have to climb after a big night. Le Sirenuse is the best of all worlds: right off the one main road, only a short walk up from the main drag below, and the best sea views in town.

I’ve been to the Amalfi about seven times.  You’ll definitely want to rent a car for your trip, or hire one to bring you here. If you took public transportation, you’d be on bus after bus and train after train.  I’ve done it, don’t. Once you’re parked, you won’t want or need to move it — you can explore the rest from the sea. The drive along the narrow cliff-hugging roads is white-knuckle…and you’ll remember it for the rest of your life. (Especially the motorcycle in your rear mirror.)

The whole place is built on tourism, so it’s hard to get a bad place. But here’s a very well done booking site. Positano Online

Continue reading...
1 Discussion on “MOUNTAINS ROLLING INTO THE SEA”