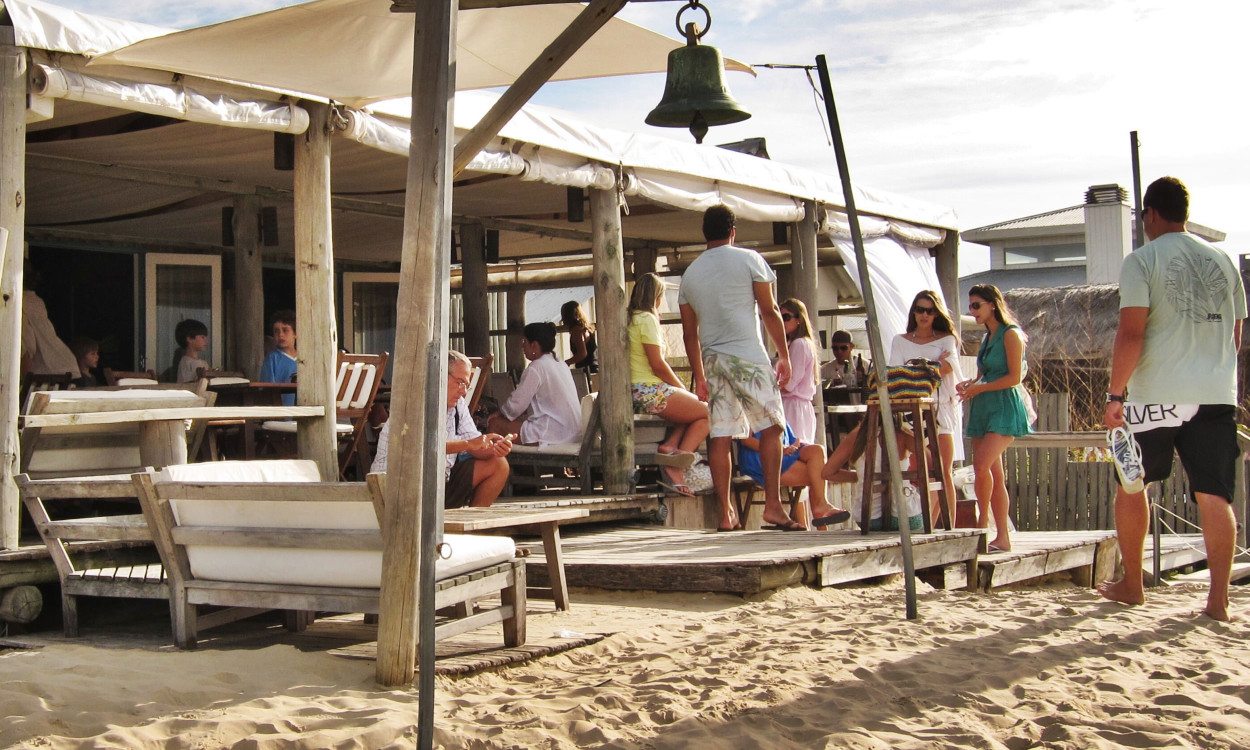 THIS MAY BE THE BEST RESTAURANT IN THE WORLD (I’M NOT ALONE ON THIS..)

[JOSE IGNACIO, URUGUAY] — It’s 3pm, the day after Christmas. It’s 82 degrees and sunny, with a light breeze gently flapping the white canvas awnings, fanning the cool shade underneath. The place is packed, everyone’s knee-to-knee. Cool pitchers of Clerico — the local Uruguayan version of a white sangria — are flowing past above the heads of the crowd, headed toward an antsy, thirsty table. There’s a DJ tucked in the back, but affecting moods in the front; like the breeze, causing everyone to gently sway along with him in a cool, mellow vibe.

The smell of woodsmoke wafts out onto the beach. The best smell there is. Large wood cutting boards burdened with a grilled whole smiling fish swim by, browned at the edges, flaky white inside, with an outrigger of  chimichurri in a clear small bowl. Was it for the fish or the crisp fries spilling off the edge of the platter?  Both.

Beautiful People, tanned, fit, usually blonde, lay all over the white canvas couches, lined up cheek-by-jowl out on the covered deck. Some in swimsuits, straight from the beach, covered with a sexy scarf; others in cottons or crisp linens, usually white or pale hues of tans, creams and French-striped sea blue.

The whole place looked like a photoshoot, for Vogue, Conde Nast Traveler, Bon Appetit, Departures or Elle Decor — doesn’t matter which, the subject matter would fit comfortably in each.  Waiters as good-looking as the patrons add to the scene, dressed in matching which Lacoste polos and shorts. Walking to the bathroom, the sound of five, six or seven different languages could be heard. No one loud, just smiling and chatting with groups of friends. Civilized. Classy.

We’d had standing reservations at 3pm sharp, every single day for our our week in Jose Ignacio. Just as we do every year, this, my fifth or sixth trip to Jose Ignacio. Mostly because of this place. Here. Every damn day of the week, certainly several times at night for a later dinner. That’s what you do at Parador La Huella. The best restaurant in the world.

You may have just had lunch here hours earlier, but waking from your sunset nap and thinking of dinner at 9pm — early around these parts — and reviewing the numerous incredible options on this secret culinary peninsula, it’s a hard choice each night… until someone eventually says “….or, we could just go to La Huella.”  Decision, done. We’re off.

Nothing I could ever do could compare to how cool this video totally captures the vibe of La Huella… and of Jose Ignacio itself. Get in the mood with this video from Bon Appetit:

Watch this video on The Scene.

Jose Ignacio is an amazing beach town north about ½ hour north of Punta del Este — which is like the Miami Beach of South America, which is not my scene. But Jose Ignacio is its down-low cousin, more like Montauk, 30 years ago. You can read more about Jose Ignacio on my website.

Situated on a perfect peninsula surrounded by some of the best beaches of the world, Jose Ignacio is like the best of all worlds, and La Huella is its epicenter. More like a dot, than epicenter, since Jose Ignacio is small, with dirt streets and a low key vibe. But contrasting that are amazing houses designed by top architects, done in a laid-back style and not ostentatious. That vibe best describes La Huella.

Set right in the center of town, La Huella — pronounced “La WAYsha” in the local dialect —  is a place you want to stop in to everyday. In fact, as soon as you get in town, set a standing reservation everyday for 3pm. Then you can in-fill on nights when you don’t eat somewhere else incredible.

Incredible food. Extremely nice vibe. And some of best people-watching on the planet. Walk through this casual place — which doubles as a Lacoste store, complete with servers wearing all tasteful Lacoste –  and you’ll hear maybe a dozen languages being spoken, sometimes at the same table. It’s like being in the Cote d’Azur, Mykonos, Amalfi and Buenos Aires all at once. But with zero pretension. The owners, Martin and Guzman, seem to know everybody as they welcome all back each year. The place is jumping at 2pm and 2am, even with the large families and kids staying up way late past midnight in a mellow, relaxed mood.

I’m just going to come right out and say it. This is the best restaurant in the world. (I am not alone in this…) Sure, there are fancier places, with white glove service, tablecloths, better wine lists, or all the molecular gastronomy shite to deliver a green cube on a big plate… But when it comes to what a restaurant really is — an awesome vibe, a killer locale right on the beach, amazing food at every meal, sexy lighting, even sexier music, super nice attentive service and some of the best people watching on the planet — nobody nails it all like La Huella in Jose Ignacio. For those that have been, am I right??? People just sit there, grinning. Regularly ranked as one of the top restaurants in South America, La Huella sits smack on the beach, where you can come in kitten heels and Hermes or step off the beach in your Osklens, everybody feels special here. Open from morning ’til morning, this is the type of place that when you’re staying a week in Jose Ignacio, you’ll want (and do) eat here every single day. Sometimes twice a day, happily. Standing reservations. Here in this little beach town in Uruguay, you walk through the dining room and hear, what, five, six, seven languages being spoken? With no windows, the smell of a wood fire comingles with sea breeze and you waft above the crowd like Pepe Le Pew, following the scents toward the smoldering coals in the kitchen. Samba is shimmying, a mellow DJ at lunch. The tan and sexy staff all wear Lacoste and look like either Giselle or Nacho or Rafael Nadal. And no matter the time of day, night, or early morning, there is Martin or Guzman holding court, watching over every detail and making people smile. This is the place. Get on a plane and come here.

When you first pull up, the town of Jose Ignacio looks like any old beach town anywhere. The first time I was planning on coming, Jose, the hotel owner sent a brushback email… like a warning shot off the bow… “There is no luxury in Jose Ignacio, it is a very small town, the streets are not paved, there is no ATM, there is no restaurant in the hotel, no room service, no spa, no workout room. If you are looking for luxury, it is not here….” That’s when I knew I had to go. “Book me!”

This is the view, looking out..

Simple beach food, executed flawlessly. Day after day. Year after year. La Huella is so understated and cool, like the Lacoste shirts and shorts they all wear. In fact, there’s even a Lacoste store in the back. So it’s a little like standing in front of a those infinity mirrors… or being in the Ralph Lauren Cafe, where there’s a store selling the same things the people serving are wearing to the people eating who are wearing the same things. And all are beautiful. (Except me, of course, I’d break the mirror..)

Hot. #2 in the series #Idigthisgrill. Check out how ingeniously simple this grill works at La Huella in Jose Ignacio. You put freshy logs in the basket at the top. They do their job and catch fire, slowly turn to embers and gently fall. Then they rake the hot coals beneath the grilling meats. (Or fish, as seen in previous post). Fire on top. Fire on bottom. Cooking with Fire.

This is how life should be. Simple things, done exceptionally well. I’ve been to #joseignacio five or six times now and as soon as the car rolls out of Punta and I get a whiff of that sea breeze, like a cat and a can opener, I start thinking of this grilled fish. I hit the gas, lift all four wheels off every lomo de burro, hockey-stop the car into the hotel parking lot, drop my bags and hoof it down the road to the beach… heading toward La Huella.

Beach vibe. The people that work here are as beautiful as the people that come here. La Huella (pronounced la HUAY-sha in the local dialect) is rocking around the clock, 20 hours a day. Make a standing reservation at 3pm everyday and enjoy an hours-long relaxing feast….not to mention the people watching….

SFDD (Same Fish, Different Day). Because that is what this is about… Each time I come to Jose Ignacio, I can’t wait to sprint to La Huella and hang out for the afternoon….dreaming about this whole grilled fish to while away in the shade. Then think about coming back for dinner.

Evening wear. See what I mean about this place? From walking off the beach in Osklens by day, to kitten heels and Hermés at night. You do, and want to, eat at here twice a day in Jose Ignacio. Always welcoming. And you get giddy… “Want to go the La Huella?!?” even if you just had lunch there that day. All week long. If it gets chilly they bring little cashmere blankets for your shoulders. Or was it llama? Coulda been vicuña. Totally sexy. That’s what makes La Huella the best restaurant in the world.

A rare uncrowded end-of-season night, actually about 11pm this night, this entire outside deck was jammed with hungry and lively crowds of people. You’ll want to eat at La Huella every single night….lunch, too.

Once you start to poke around Jose Ignacio in Uruguay, you start to realize that there’s something more going on….

Nothing better than to share such an incredible place with friends.

Come for the beaches. But come for the food. I’ve only been to Jose Ignacio five times, but after a stressful life and a long flight, there’s nothing I look forward to more than getting to the hotel, kicking off my shoes and getting itchy to walk down the road to La Huella. They may not know me, but I feel welcomed each time I come back.

Here is a completely awesome article on La Huella (pronounce Hoo-ay-sha in the local dialect) in the July, 2012 Bon Appetit, which calls it “The Best Beachside Restaurant on the Planet”. Seeeee. I’m not alone on this….  Make sure you click through the video, it’s the best thing to capture the vibe of the place…way better than I can ever describe. Also featured in The World’s 50 Best Restaurants. And in AFAR magazine as The Best Restaurant on the Planet. In a great article in Food & Wine. And Johnny Jet. And even the Daily Mail. And Conde Nast Traveler In the Mood for Maldonado, the surrounding area. 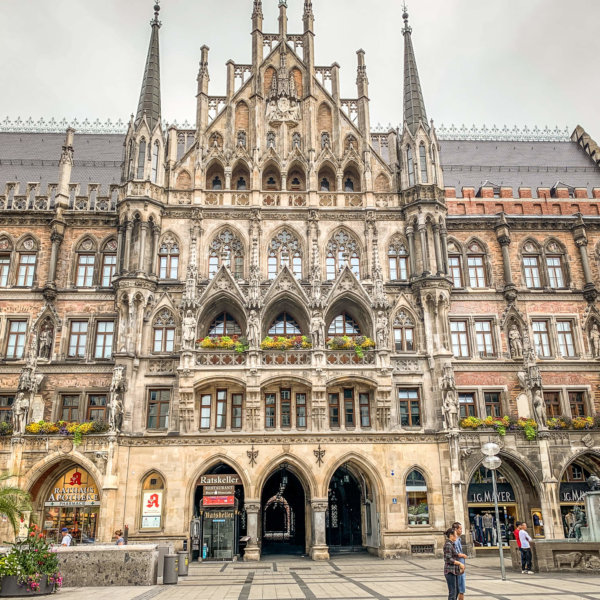 HOW TO SPEND 36 HOURS IN MUNICH

[MÜNCHEN, GERMANY] — If you’re flying in/out of the ultra…

Continue reading...
4 Discussions on
“THIS MAY BE THE BEST RESTAURANT IN THE WORLD (I’M NOT ALONE ON THIS..)”