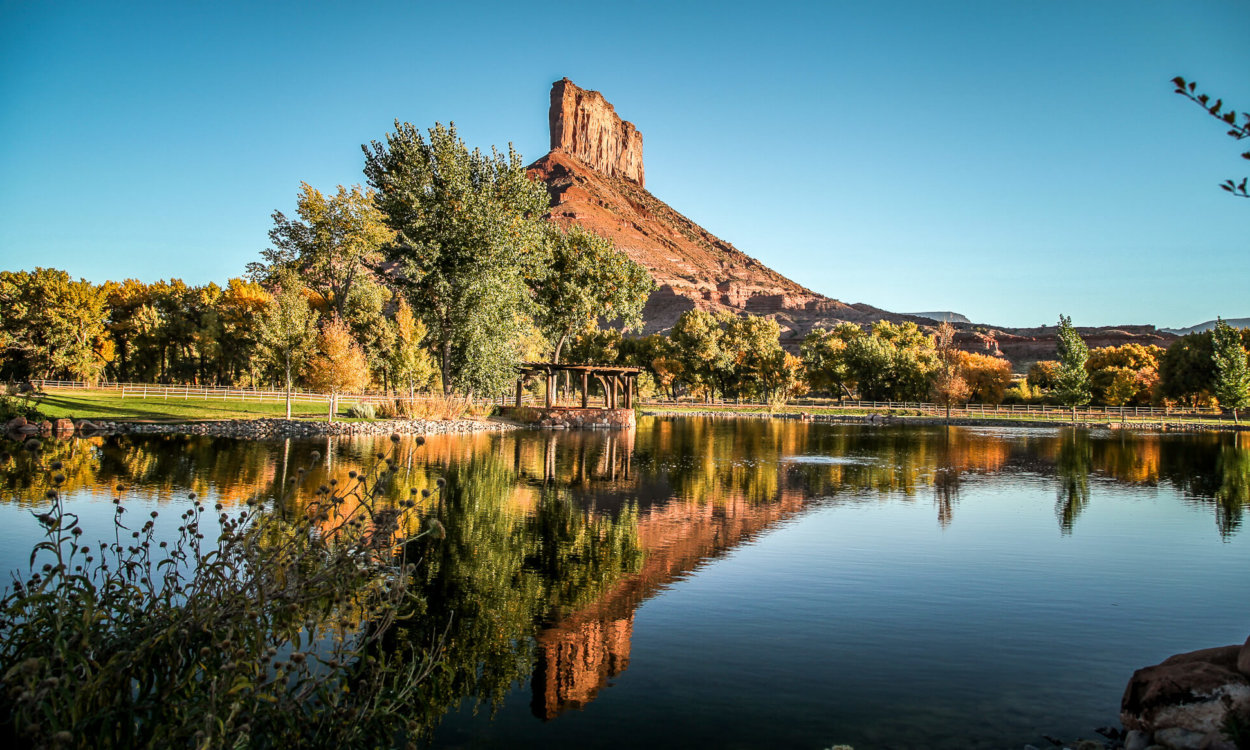 [GATEWAY, COLORADO]  — Okay, where the hell did this place come from?  Gateway Canyons Resort. Out of nowhere this over-the-top location has popped out of the blue over the last couple of years.

Once the private ranch of the founder of the Discovery Channel, he has slowly built this from a small, in-the-know conference center with a handful of rooms into a full-on resort, adding chunks of rooms and facilities each year until it is now one of the best resorts I’ve been to in the U.S.

This is Colorado?? I thought it was all about mountains and skiing?  Yup. But then there’s here.

Western Colorado is a blurred line into the canyony parts of Utah. An hour south of ridgy Grand Junction — Colorado’s Orchard slope, also known as The Western Slope — sits the teeny town of Gateway, nestled in high-hipped canyon ridges that make 80’s Meg Ryan mom jeans look low-cut. And this resort is here.

So full-on, that Conde Nast Traveler voted it the best resort in Colorado, #3 in the United States and #12 in the world. After visiting there, I can see why. Holy cow. 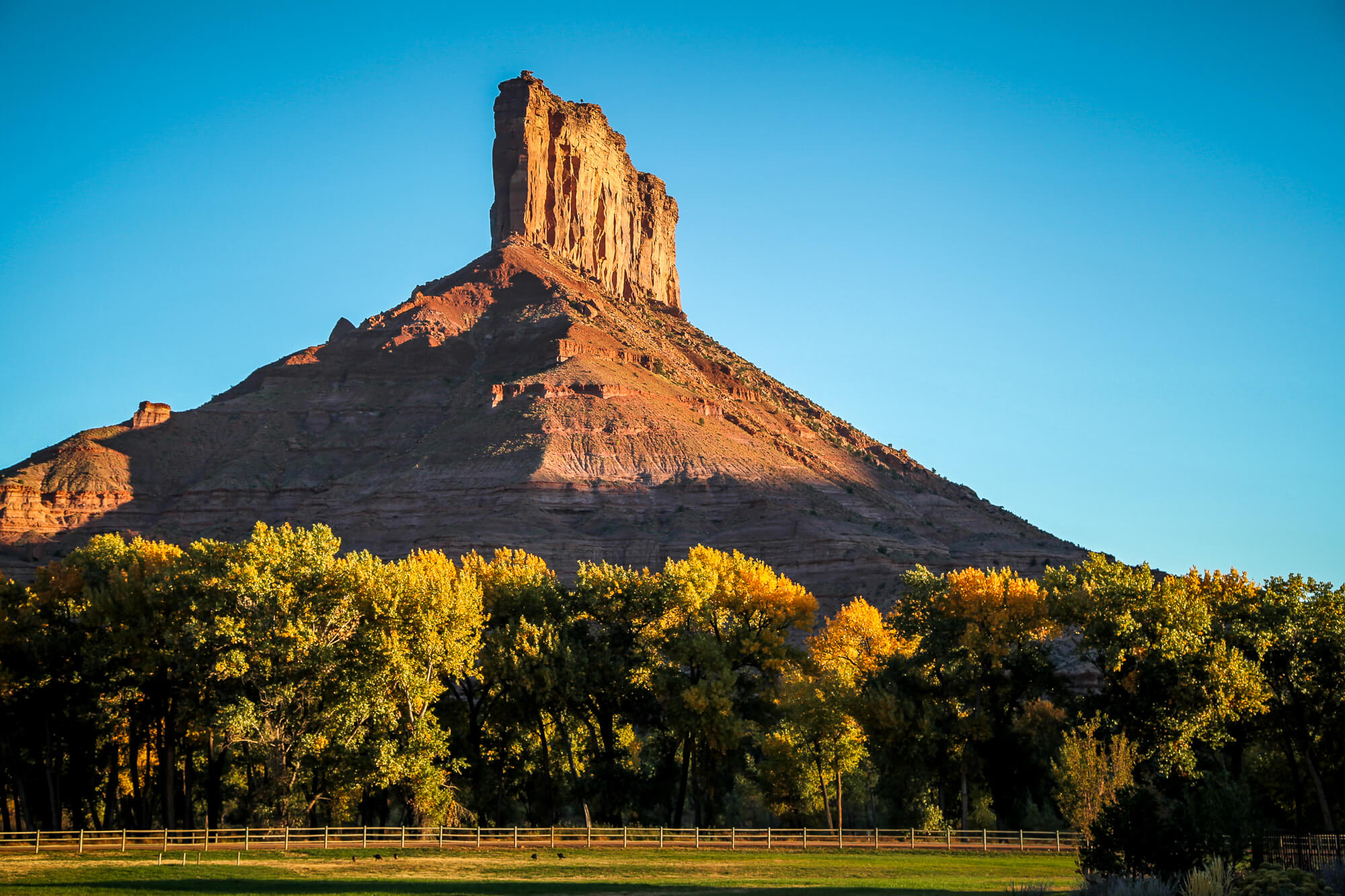 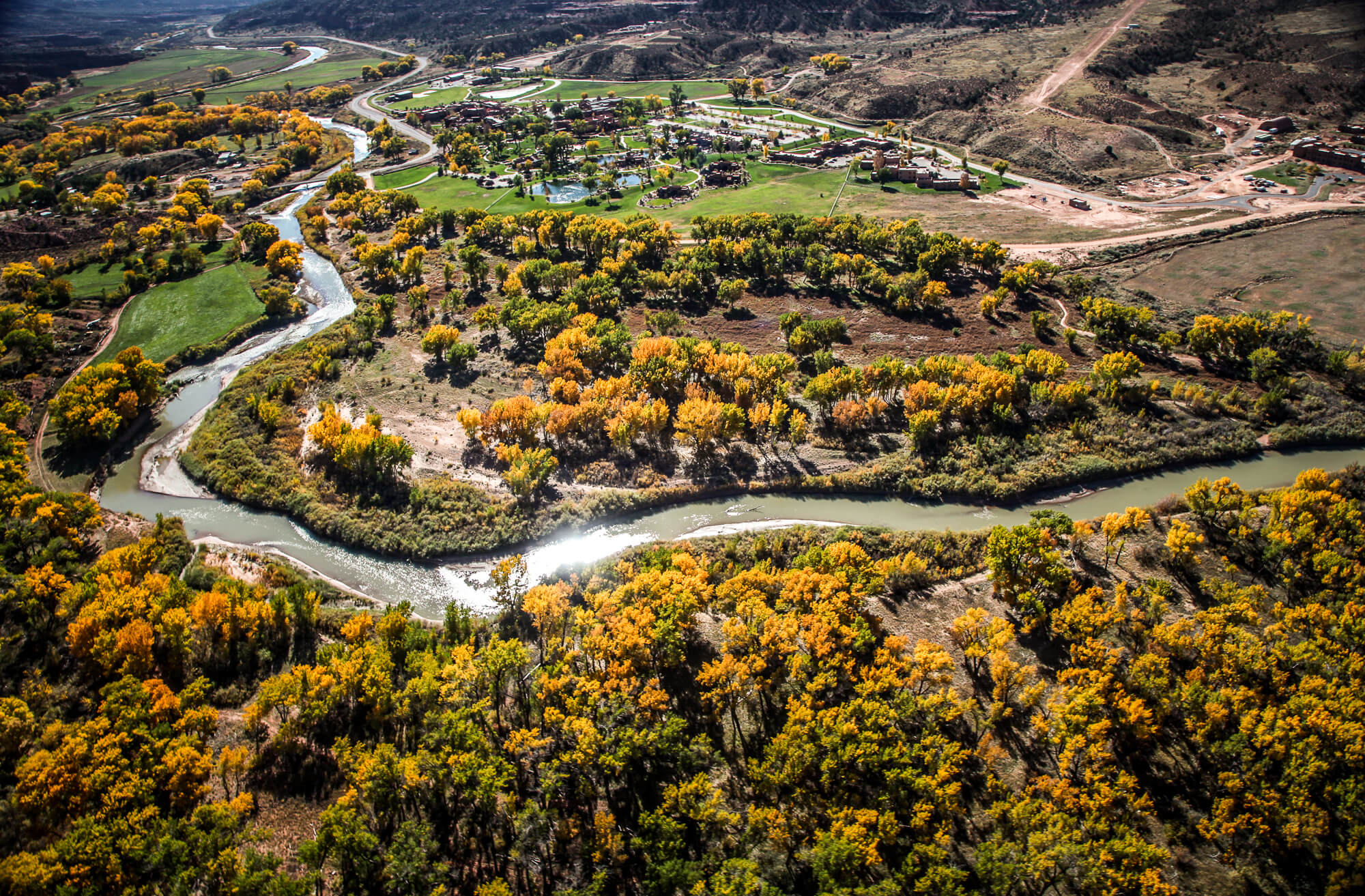 [EDITOR’S NOTE: This is a refreshed article from a past stay, with improved photos and editorial to match the look of my evolved site.If you’ve been around for a while, sorry for redundancy, but hopefully you’ll find new inspiration.]

I’ve lived in Colorado for nearly 30 years and I didn’t even know this area existed.

Sidled up to the Utah border, a beautiful hour drive south of homely Grand Junction  You drive 44 miles through a winding canyon with sparse population in one of the Car & Driver’s Top Ten Drives of the World. Make sure you time your drive to arrive near sunset; not too late, not too early .

Canyon walls and winding river follow you the whole way until out pops this beautiful resort at the crux of five different canyons (hence the Gateway name).  In its isolated beauty, the resort is surrounded by hundreds of thousands of wilderness, canyons, mesas, national parks and BLM lands. 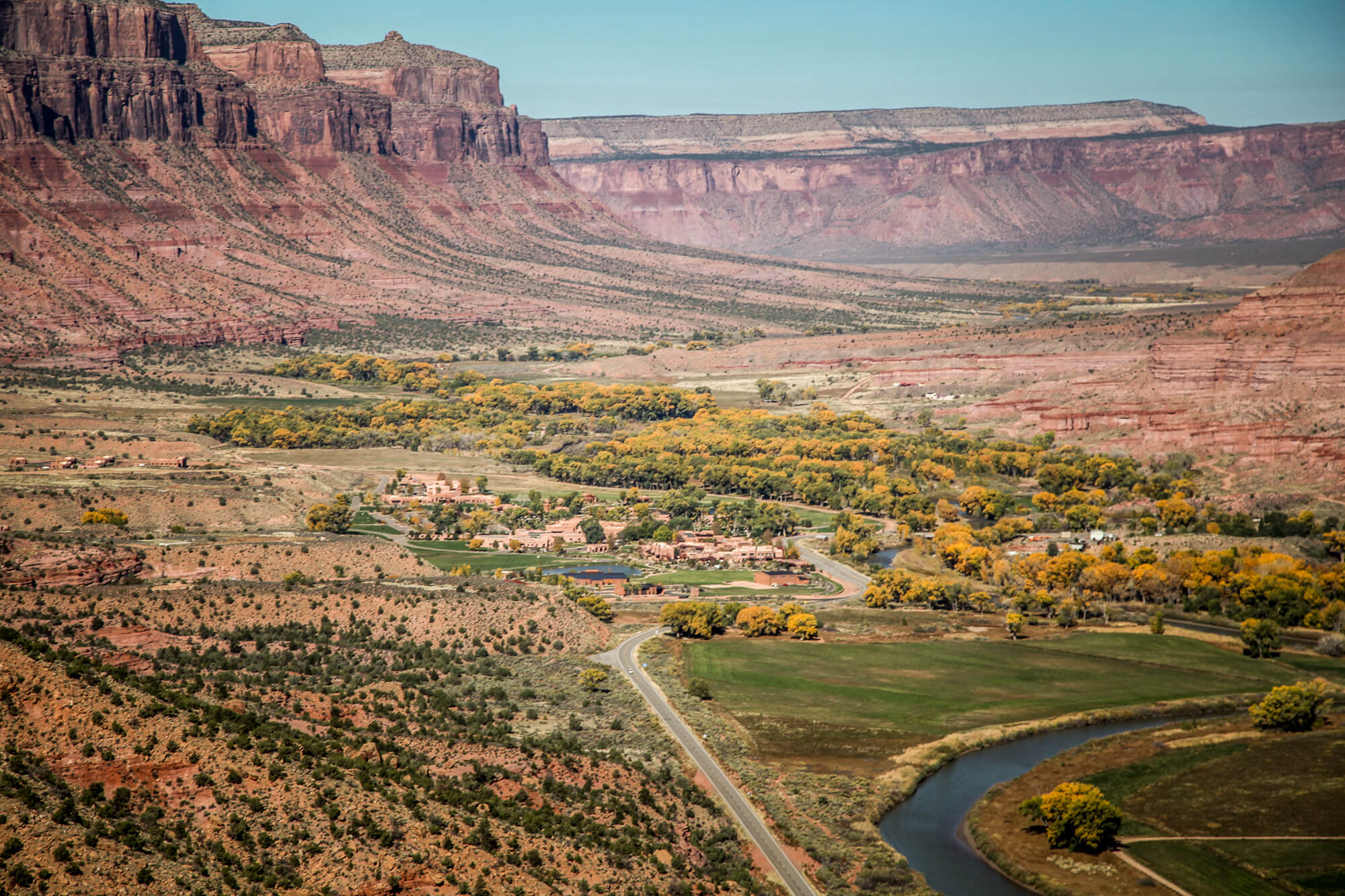 I mean, seriously… look at where this hotel is. Tucked in way down there at the intersection of several different canyons. Hence the name, Gateway Canyons. (I’ll show you how I got this shot in …) 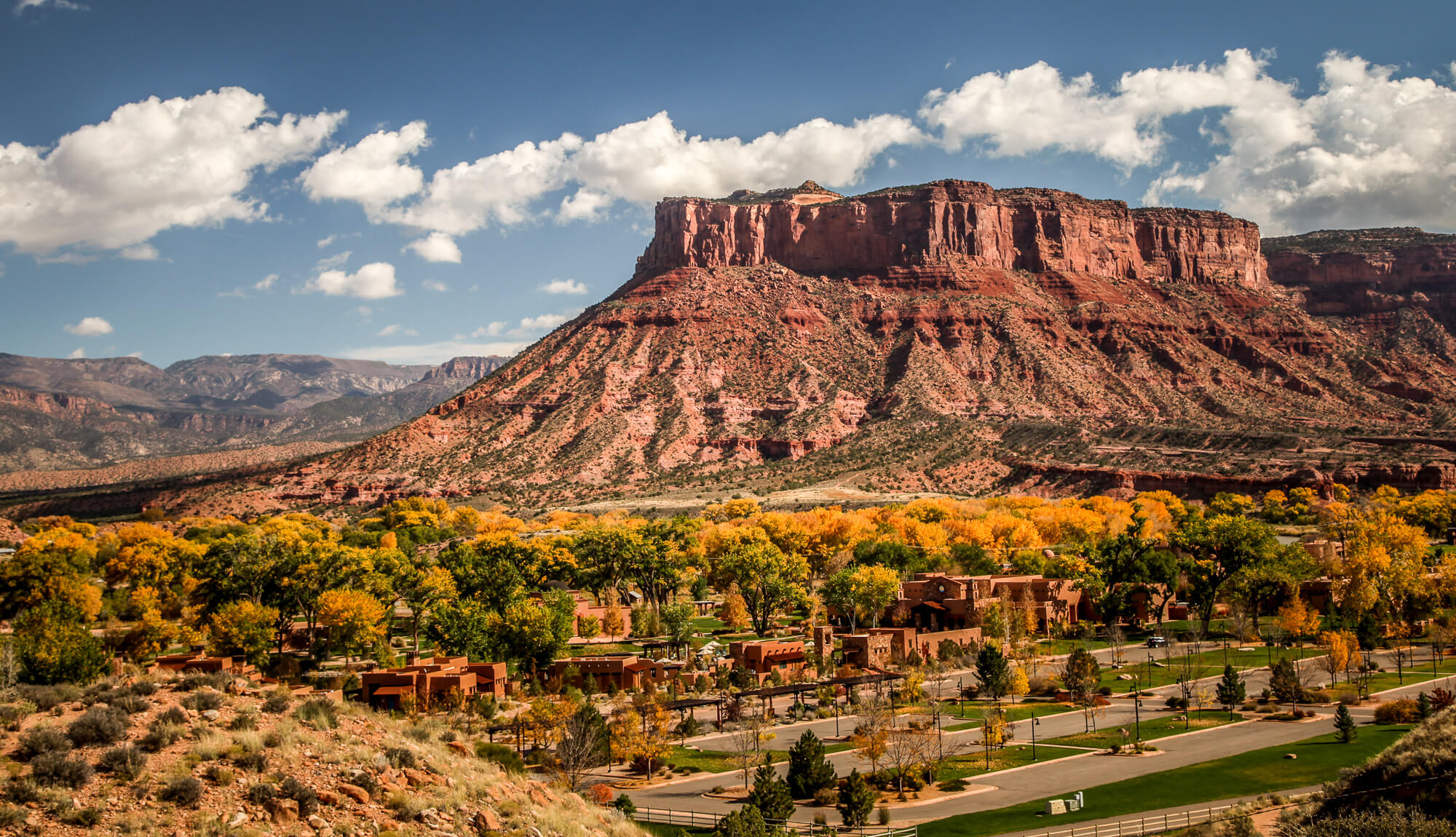 The whole resort is built around this big beautiful hunk of rock called The Palisade. (You will see a lot more of it in upcoming posts.) If you google the word “palisade” its origin goes back to Greek and Roman times and means, loosely, “a rock fence”. Who wouldda thought that early Western pioneers were Greco-Roman scholars when they named this? Supposedly the Romans kicked the shit of the Greeks on making stronger palisades to defend their military camps. Makes sense; they made damn good bridges. But someone else built this marvelous beast… 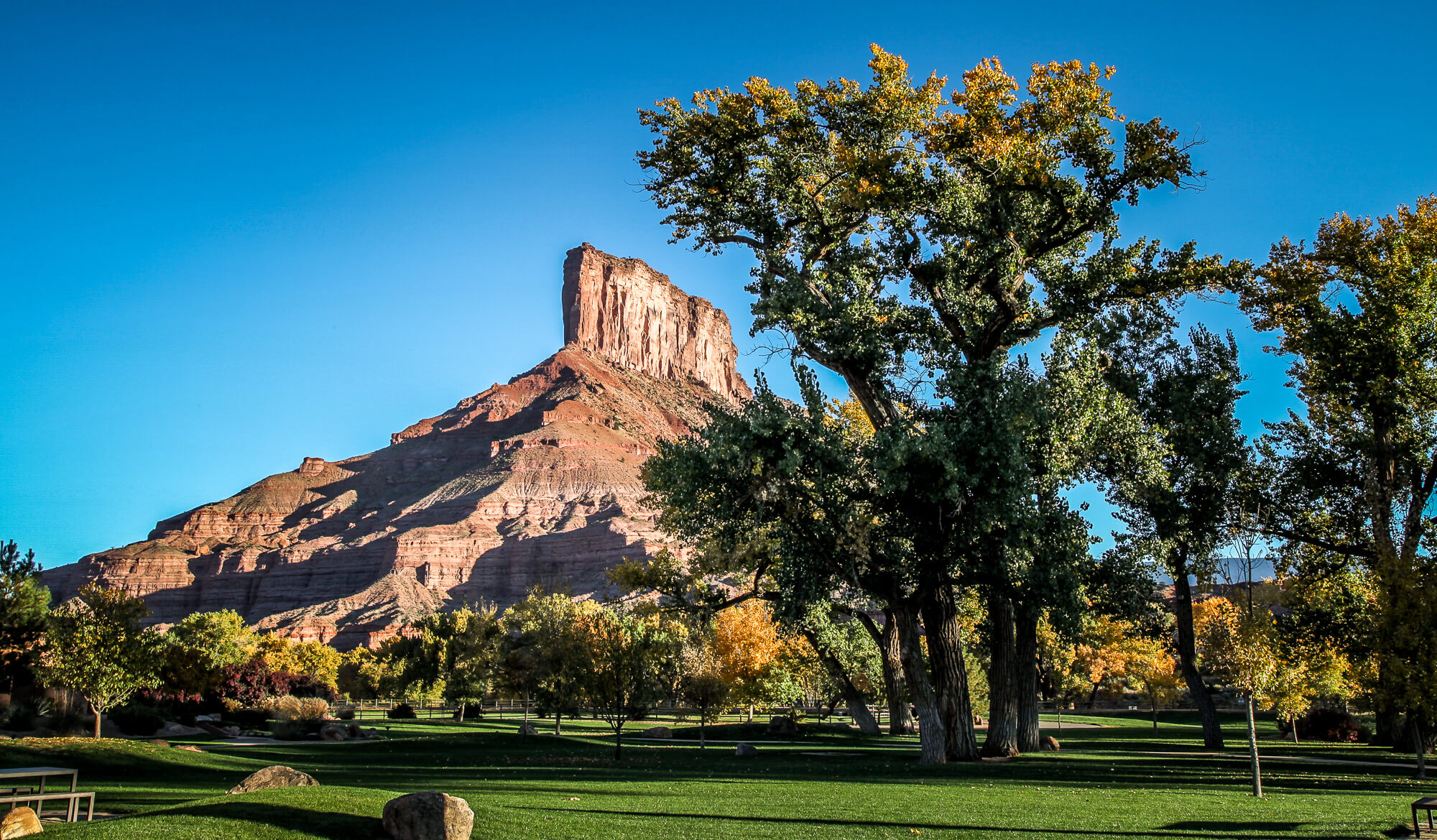 Yep, “stone fence” is a good name for it. 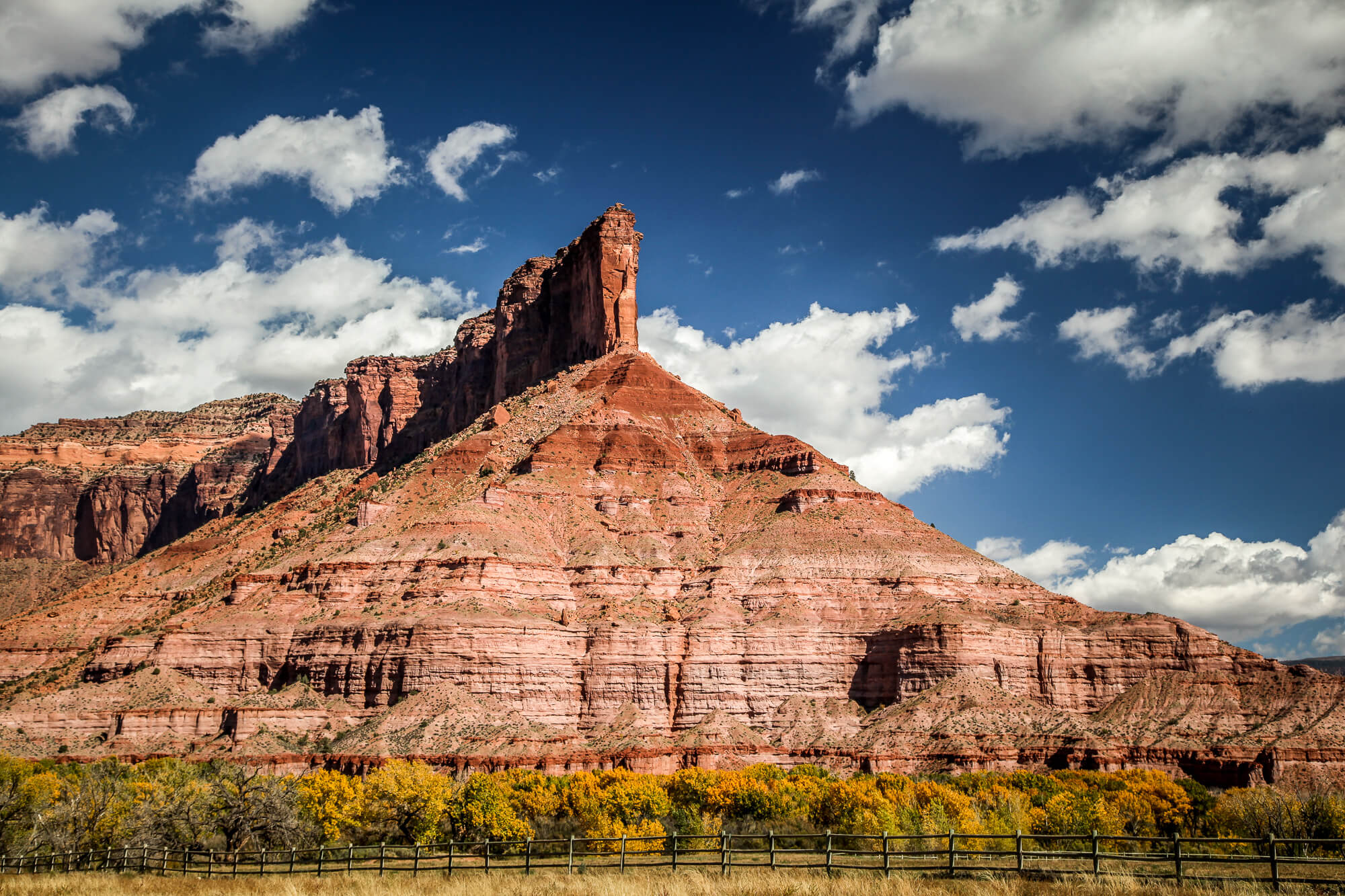 Yep, “stone fence” is a good name for it. Took me two whole days doing other cool shit before I got a chance to hike around to the backside of this thing and realize there is a whole ‘nother situation going on behind it. Holy cow. So optically deceiving; sneaky devil rock. All that time I thought it was just a cool pokey-up thing. Now it makes even more sense why “palisade” means “rock fence”. Rock fence for miles… 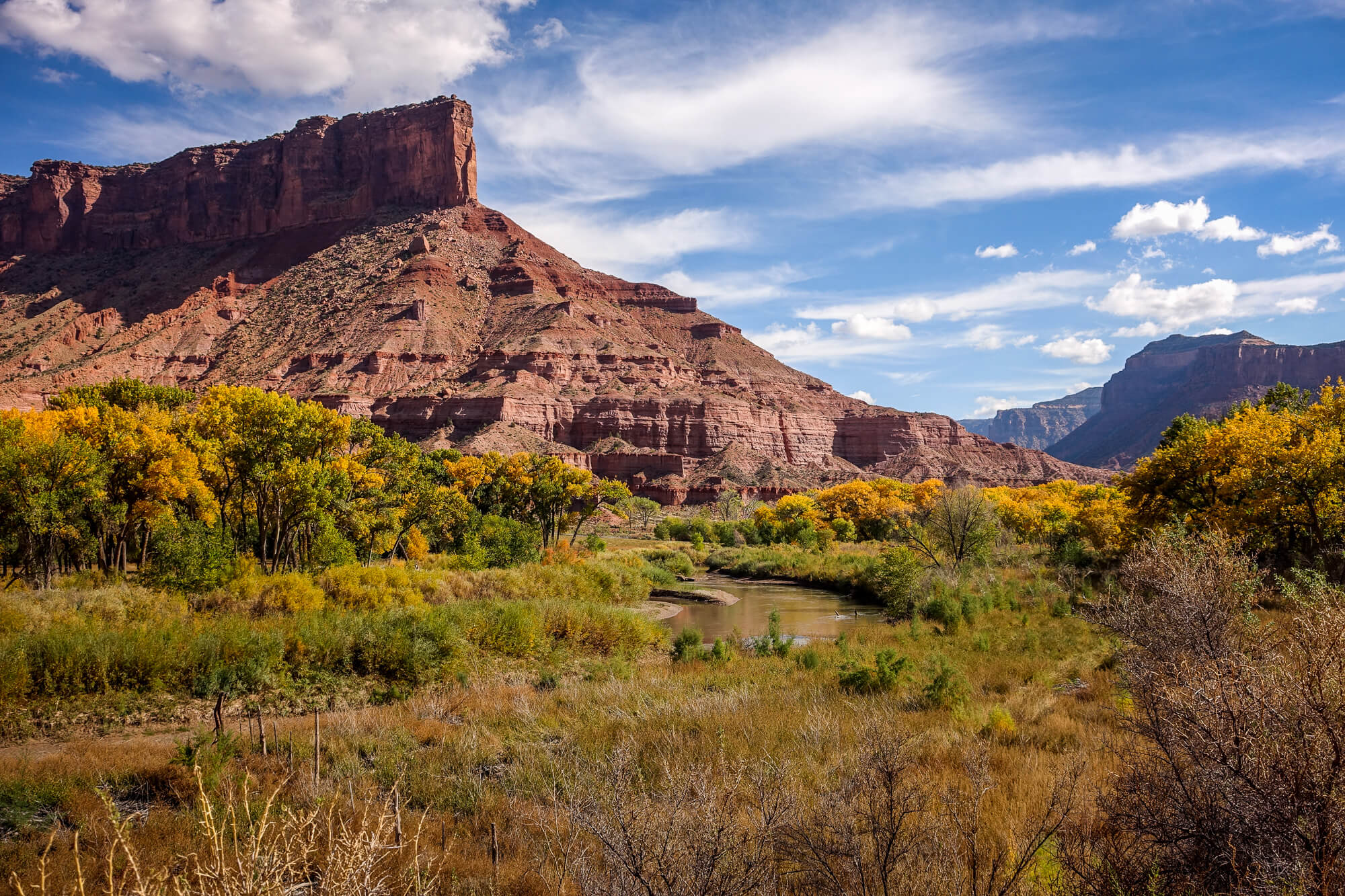 The Adventureland of Gateway Canyons

The resort is set up for adventure, complete with their own helicopter, car museum, guides and ever an elaborate Driven Experience that is over-the-top full of toys of every size, shape and budget, that you can rent and take out on- or off-road. The driving stuff is not my style, but the helicopter ride over the canyons is one of the coolest things I’ve ever done. Captain Mike was totally knowledgable above every landmark, canyon and gully…and was totally accommodating in lining up his ship so I could get the best pictures. I can’t wait to go back. 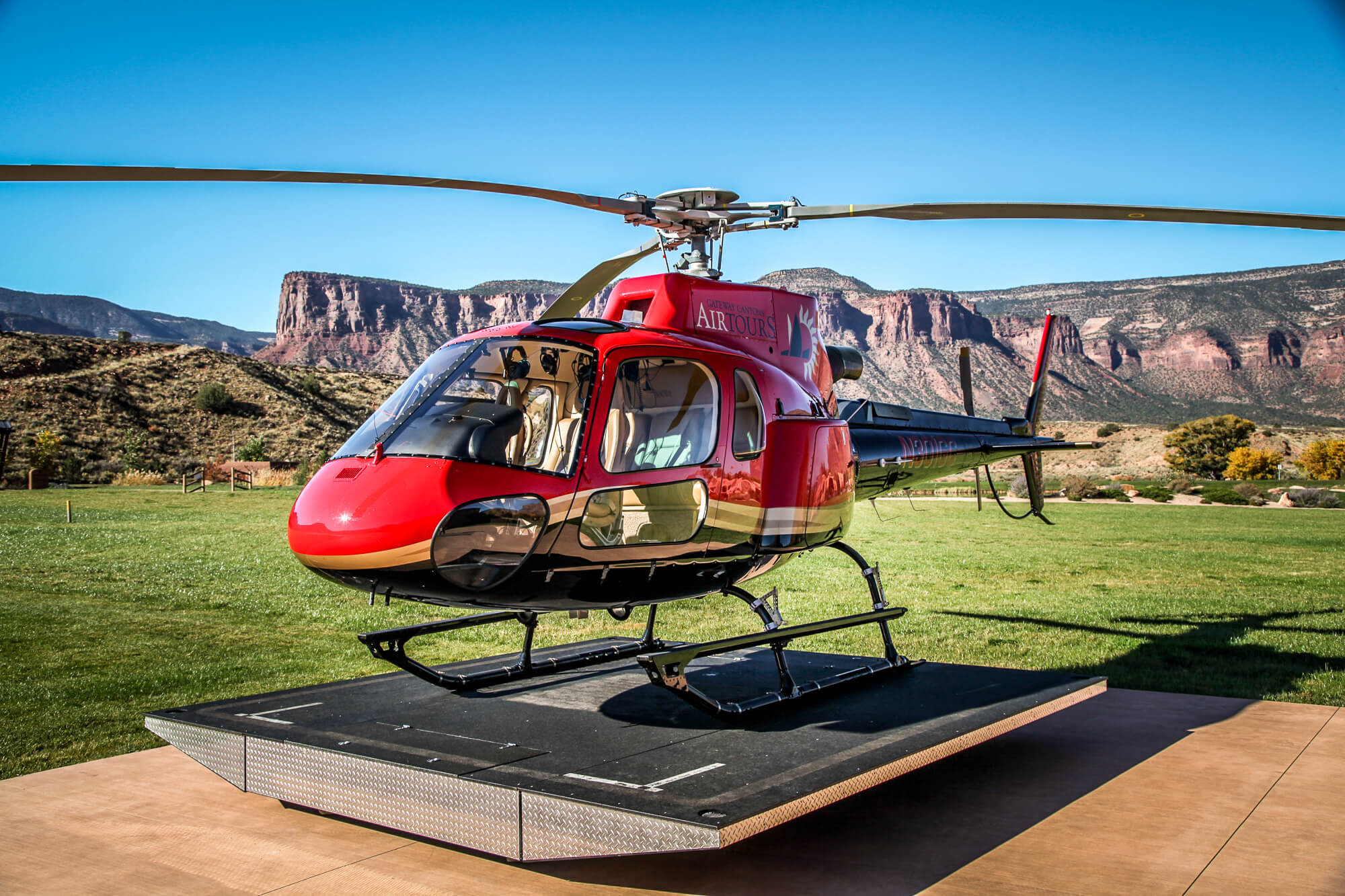 Uhnd now vee get to zee gut part… This place has their own chopper! 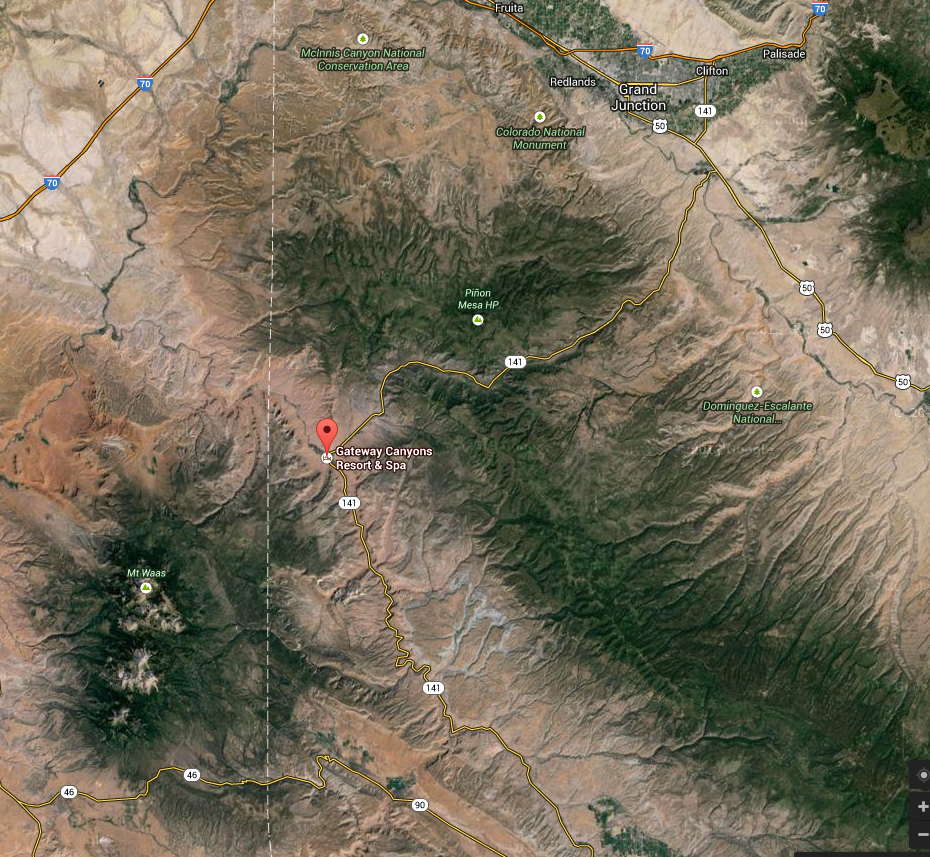 Okay, lemme explain what’s going on here… and why this area is so cool. This is where we are, from space. The red dot is Gateway Canyons, not far from the Colorado/Utah border on the left. Other side of that is Moab, Arches, Canyonlands, etc… Three national parks all rightthere. Another three national forests to the right and below. And canyons out the wazoo… Millions of years of history flowing right before your eyes. So, when you’re In a helicopter and press the ⬆️ button, you are instantly flying over some of the coolest shit in the U.S. 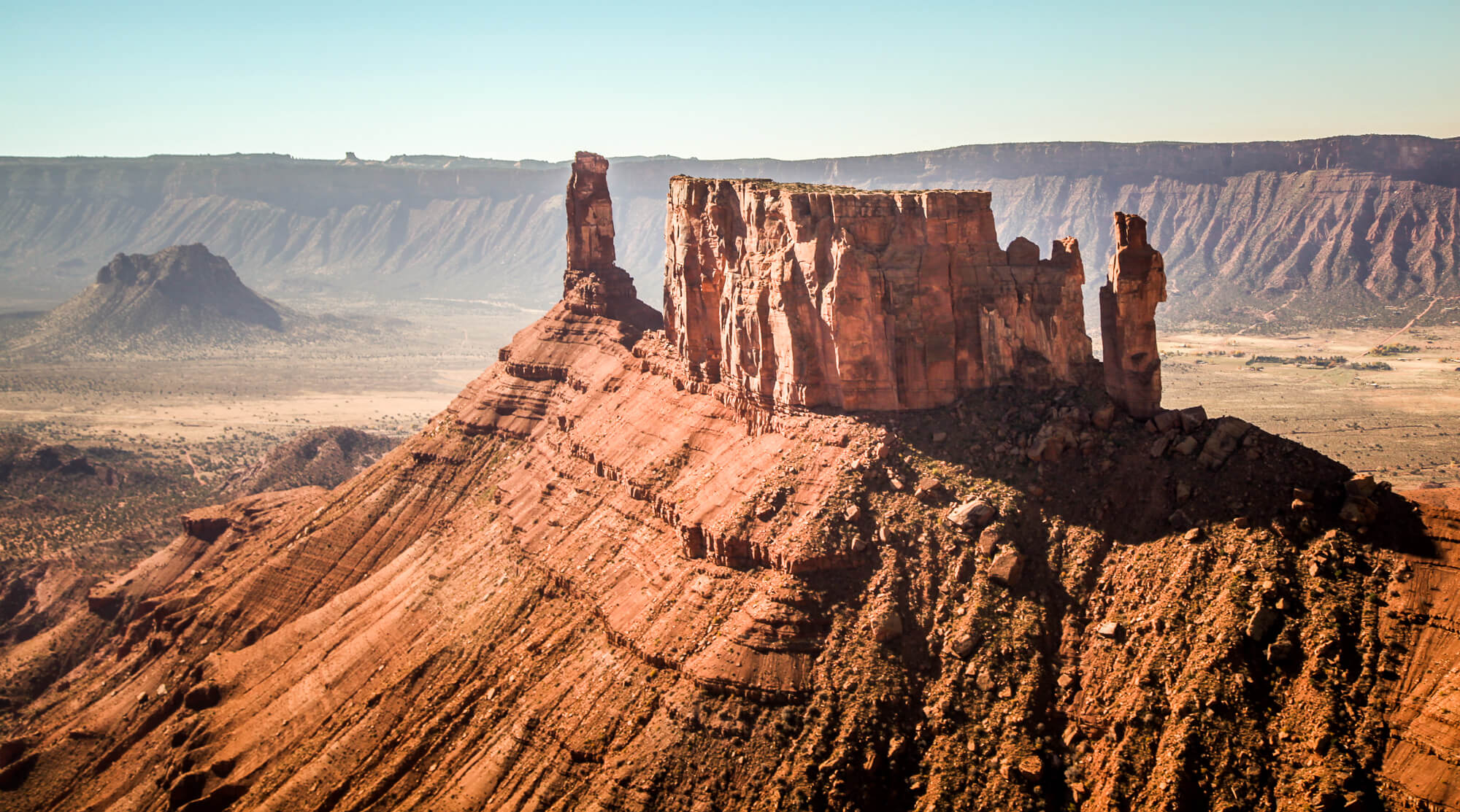 Gateway Canyons has their own helicopter! You can fly over some of the most beautiful canyons in the country. 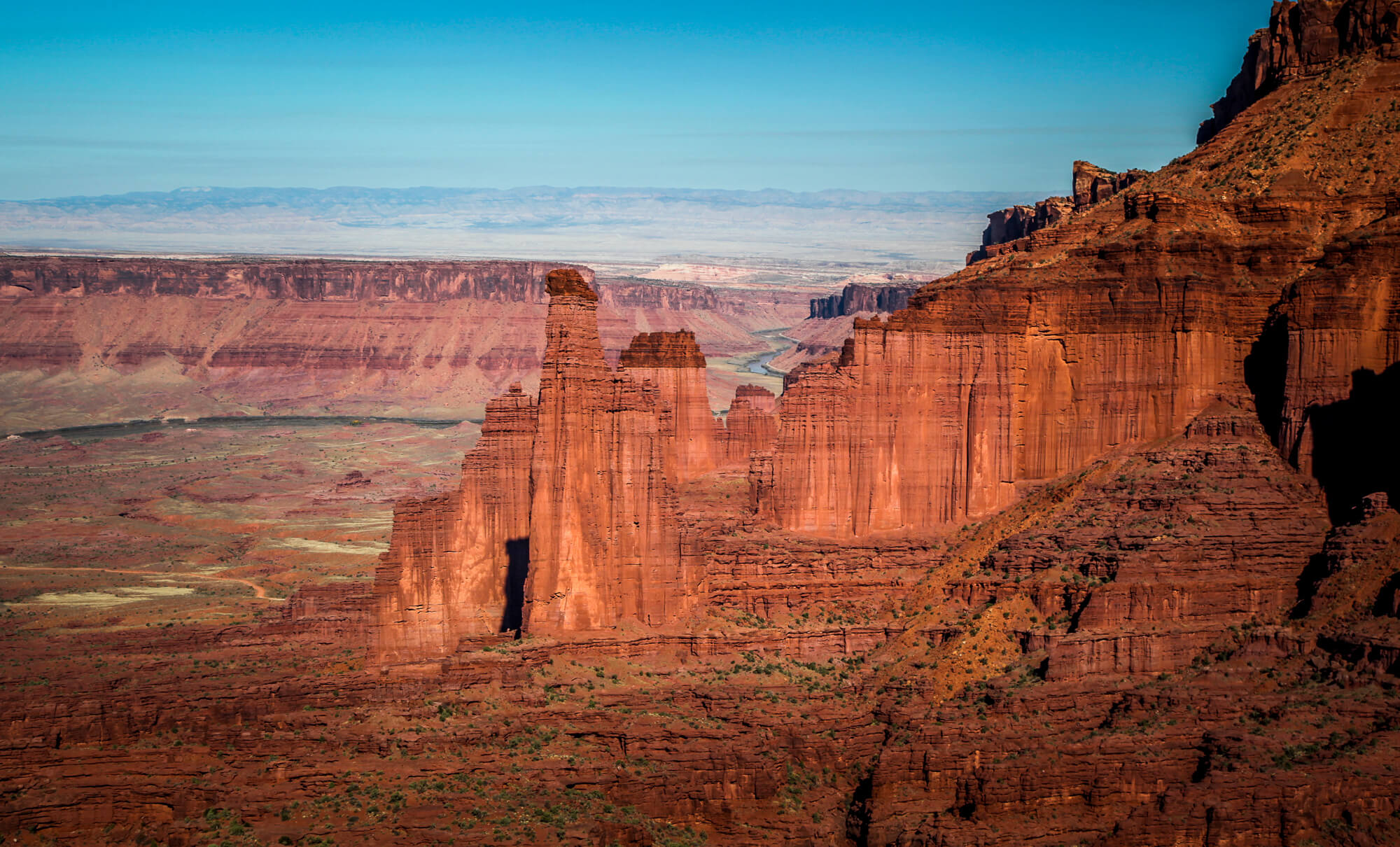 Within seconds, you pop over the Utah state line. With this guy staring right at you. Fisher Towers, a very popular rock climbing route. 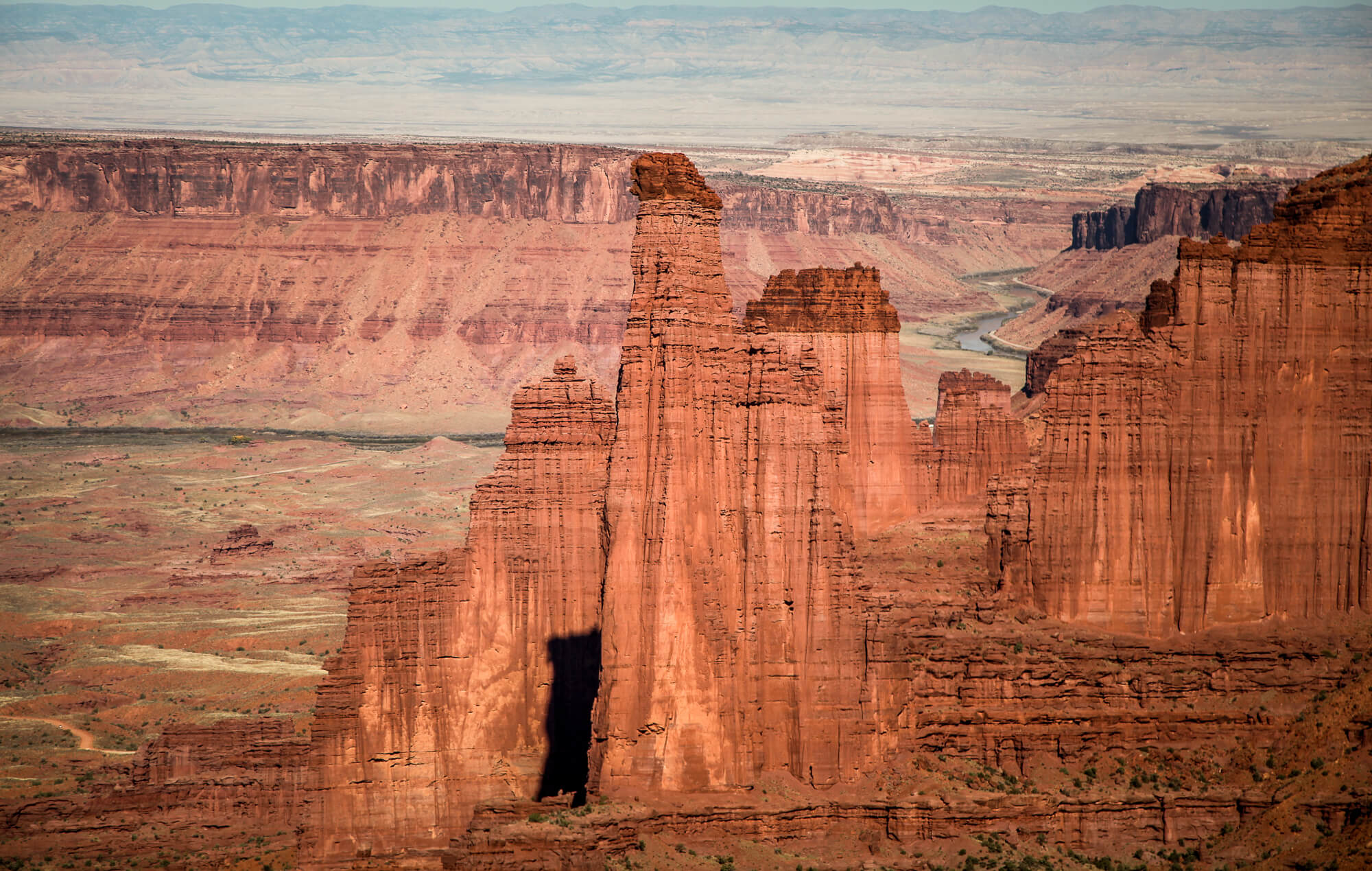 “Dog, with a choppa, you can get all up in that grill.” 🚁. You get upclose… even though you are far away.

I mean, seriously… look at where this hotel is. Tucked in way down there at the intersection of several different canyons. Hence the name, Gateway Canyons.

Oh yeah, nearly forgot… while we’re up here… this is not really my kinda thing, but if you’re into dirt bikes and big wheeled Baja racing truck stuff, Gateway Canyons has their own professional desert race track thingy so you can go out there and rip it up like Mad Max… (If this doesn’t make sense, follow the thread) 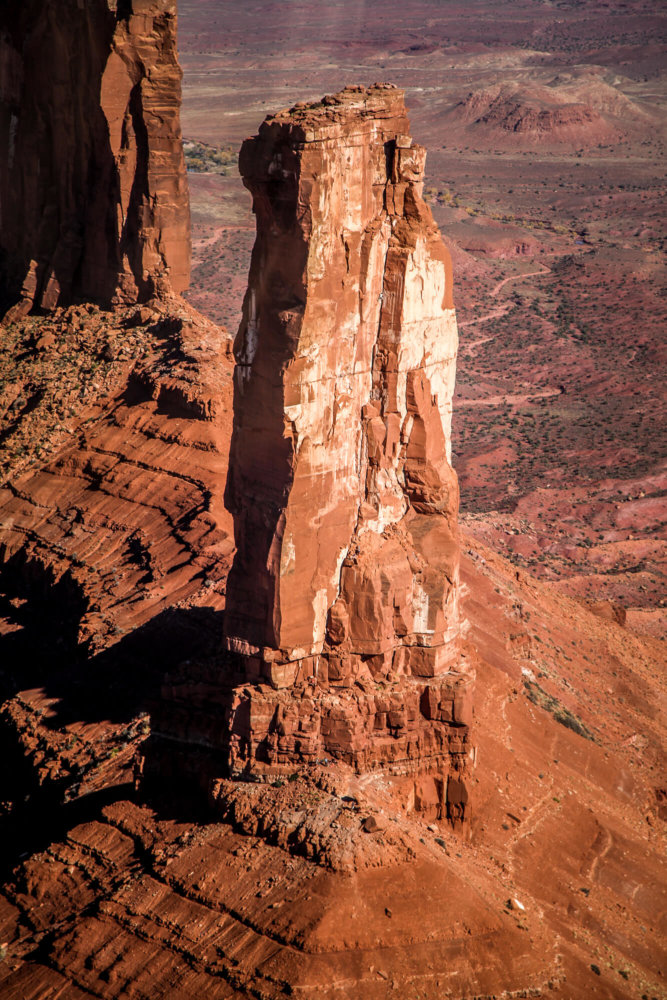 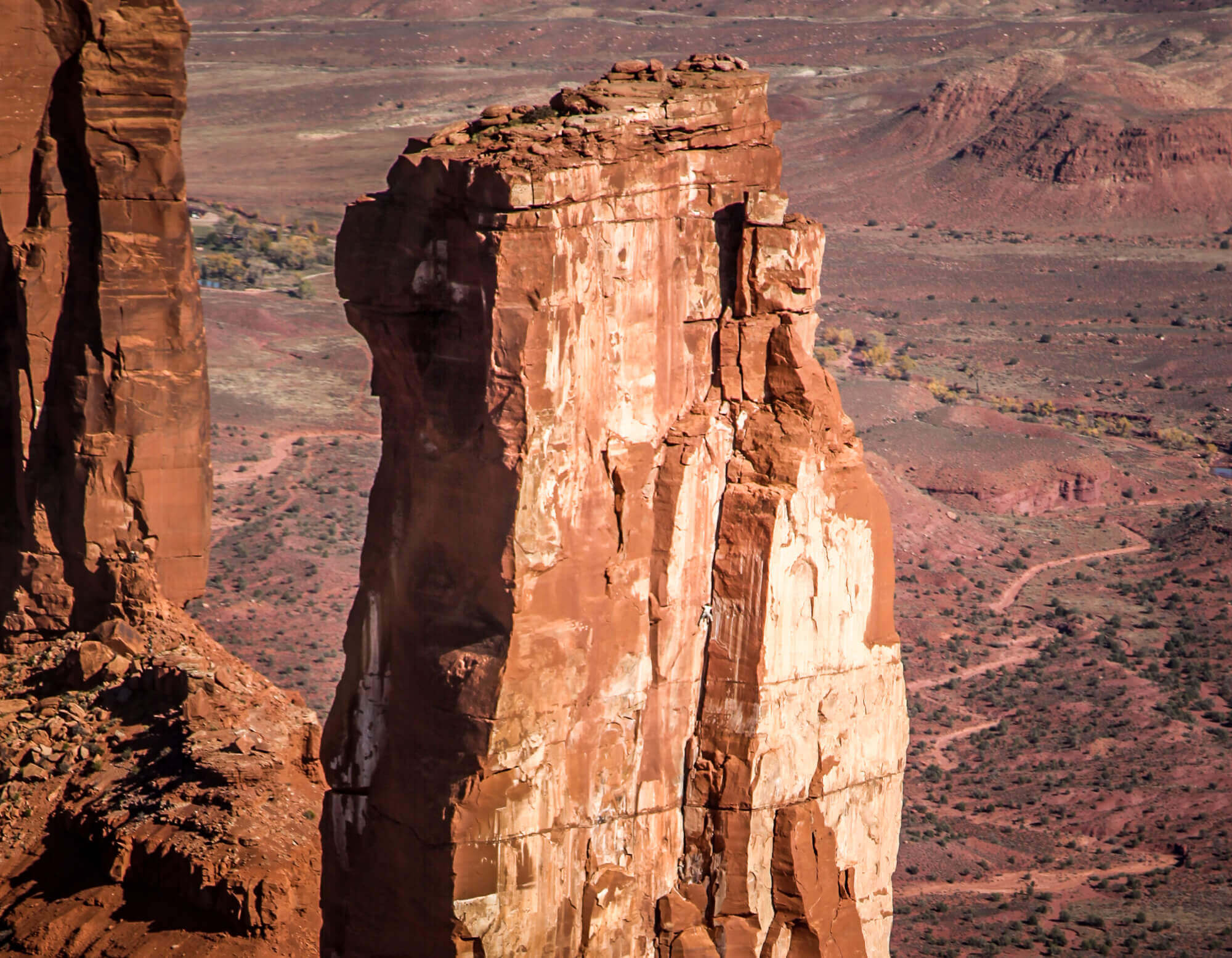 Can you see him/her? This was like being in my favorite Far Side cartoon, with the two pilots looking out the front of a cockpit straight ahead into a small hole in a cloud bank and there’s a freaked out sheep standing on a rock looking back at them. Captain says: “Now what’s that funny sheep doing all the way up here?” 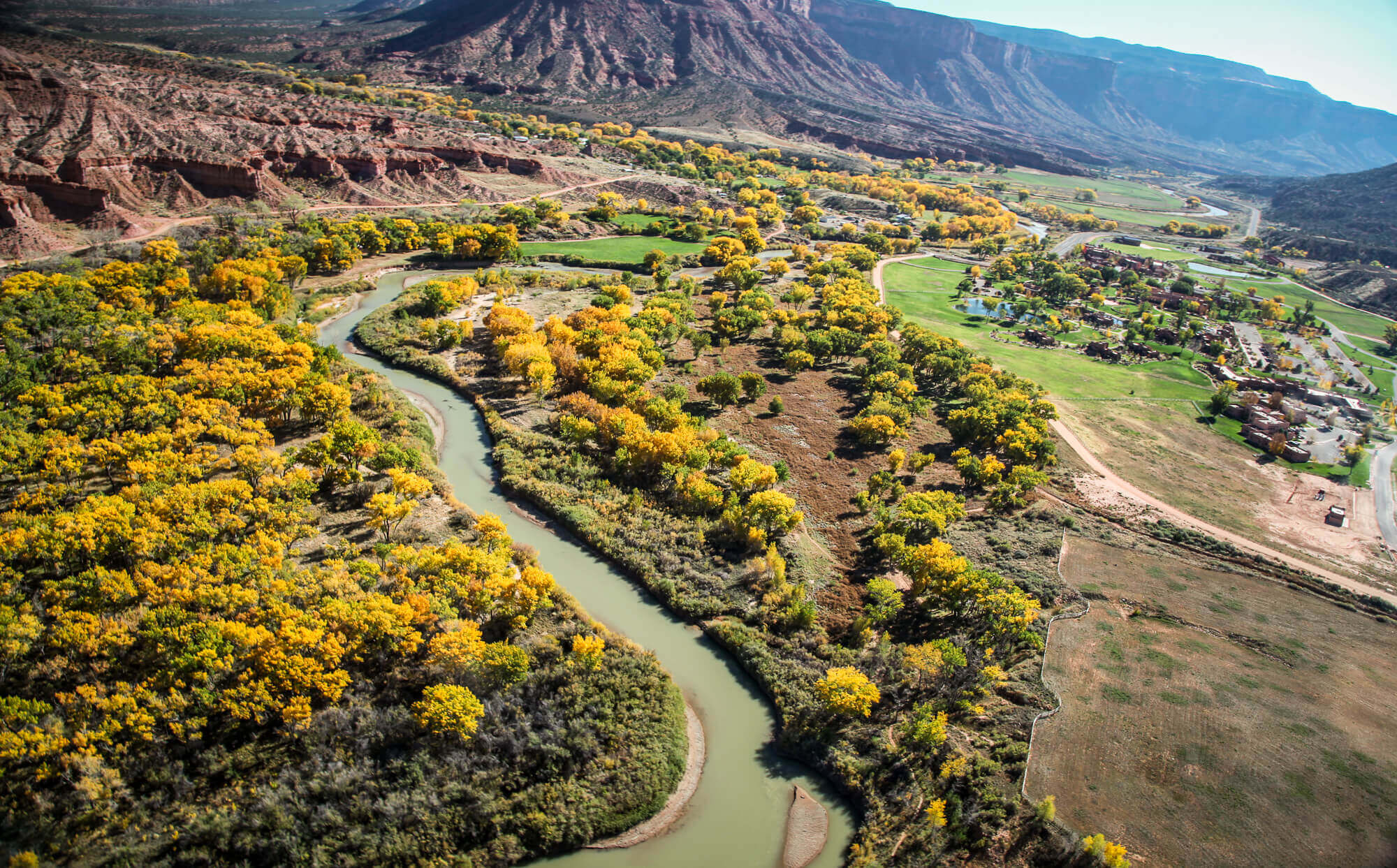 Yup. Good place to put an adventure hotel. You can do everything here. Raft. Hike. Trek. Horseback ride. Fly fish. Rock climb. The owner founded the Discovery Channel, so the whole resort is built around… discovery. He also has a badass classic car collection in a private museum. You can even rent hopped up cars like Porsches, Phantoms, Mustangs, Corvettes, etc and go ripping up the desolate, but perfectly paved roads that wind up all the canyons — the main road in my previous post being ranked one of the top ten driving roads in the world. Giddyup.

The Rooms at Gateway Canyons 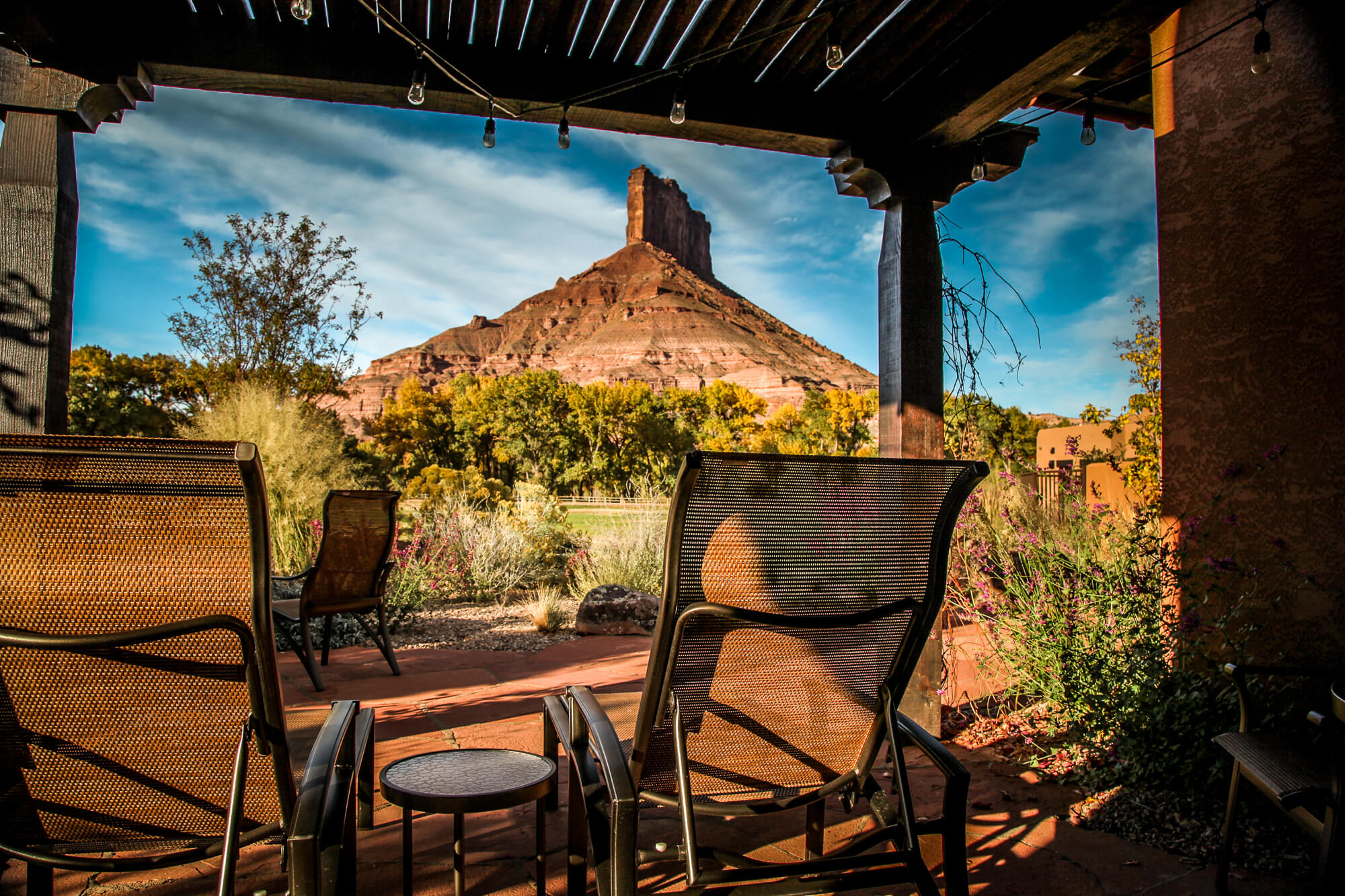 Meanwhile, back at the ranch. That thing is still there… 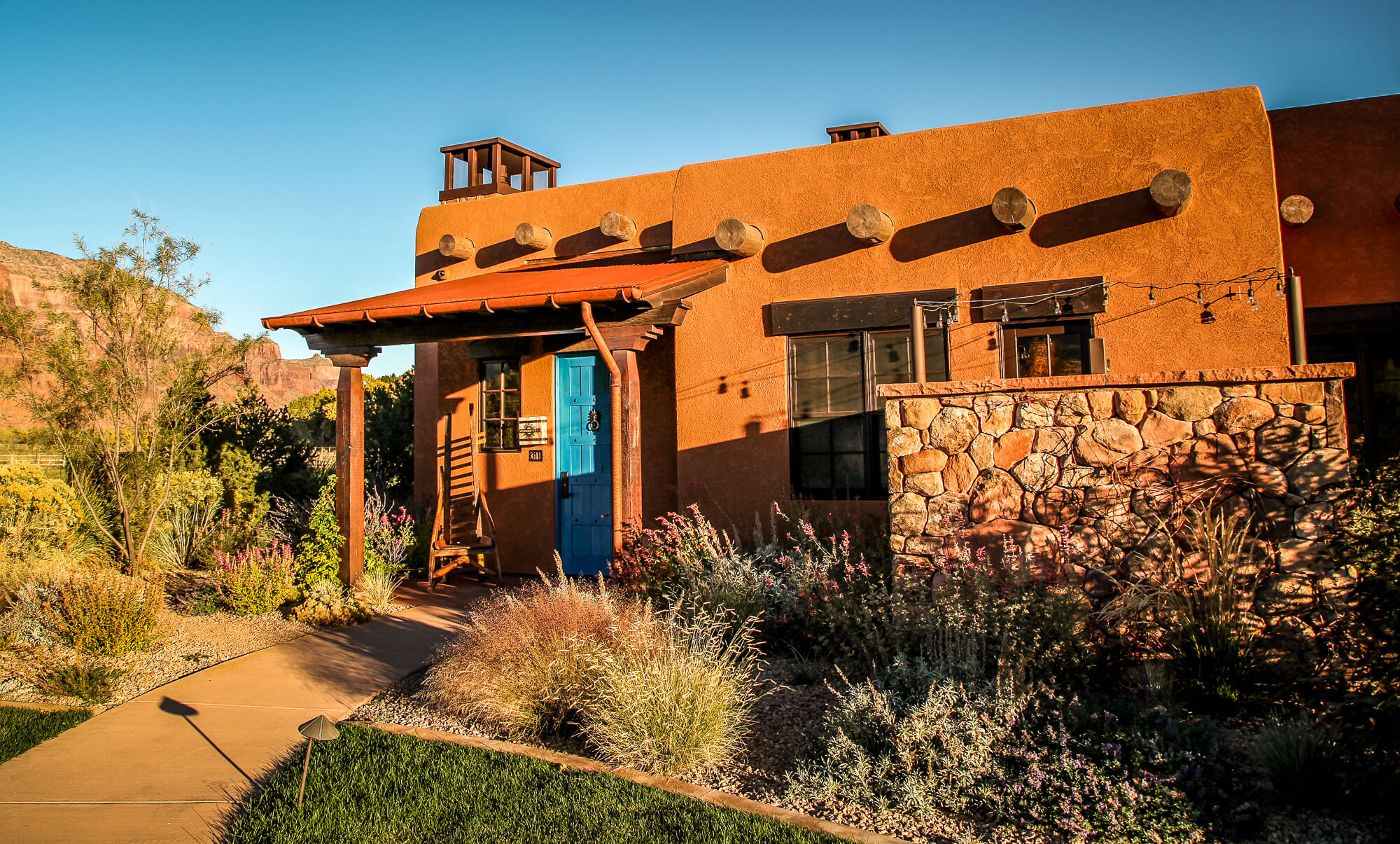 If you go to Gateway Canyons and can swing it, splurge on one of the casitas at the far end of the resort. It’s worth it. You’re away from everyone (my fave), with the most perfect views of the Palisade and your own private outdoor space. Even your own festive fire pit, where you can sit in awe of the blanket of stars. And howl at the moon. #youshouldgohere To be honest, the rooms are the kinda generic, but lovely “mountain motif” you see everywhere else in Colorado — nice sheets, woody things, antler chandeliers and all that. They’re nice, but not all that special; a nice French or Argentine woman could really add some zaaaa to take it over the top… to match the views.

But the views from the rooms are something else. 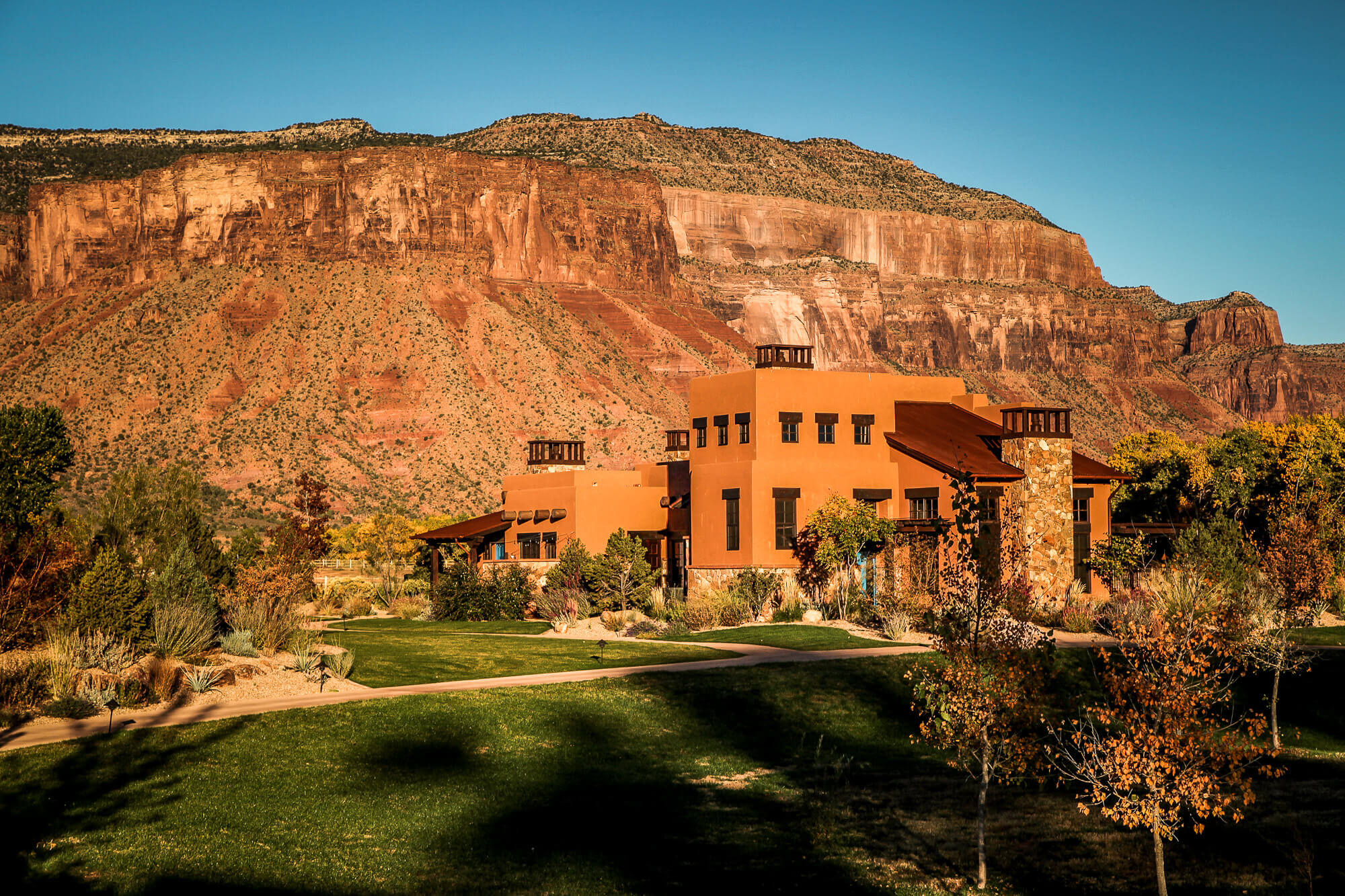 There’s a main lodging building, then clusters of smaller casitas spread across the property. 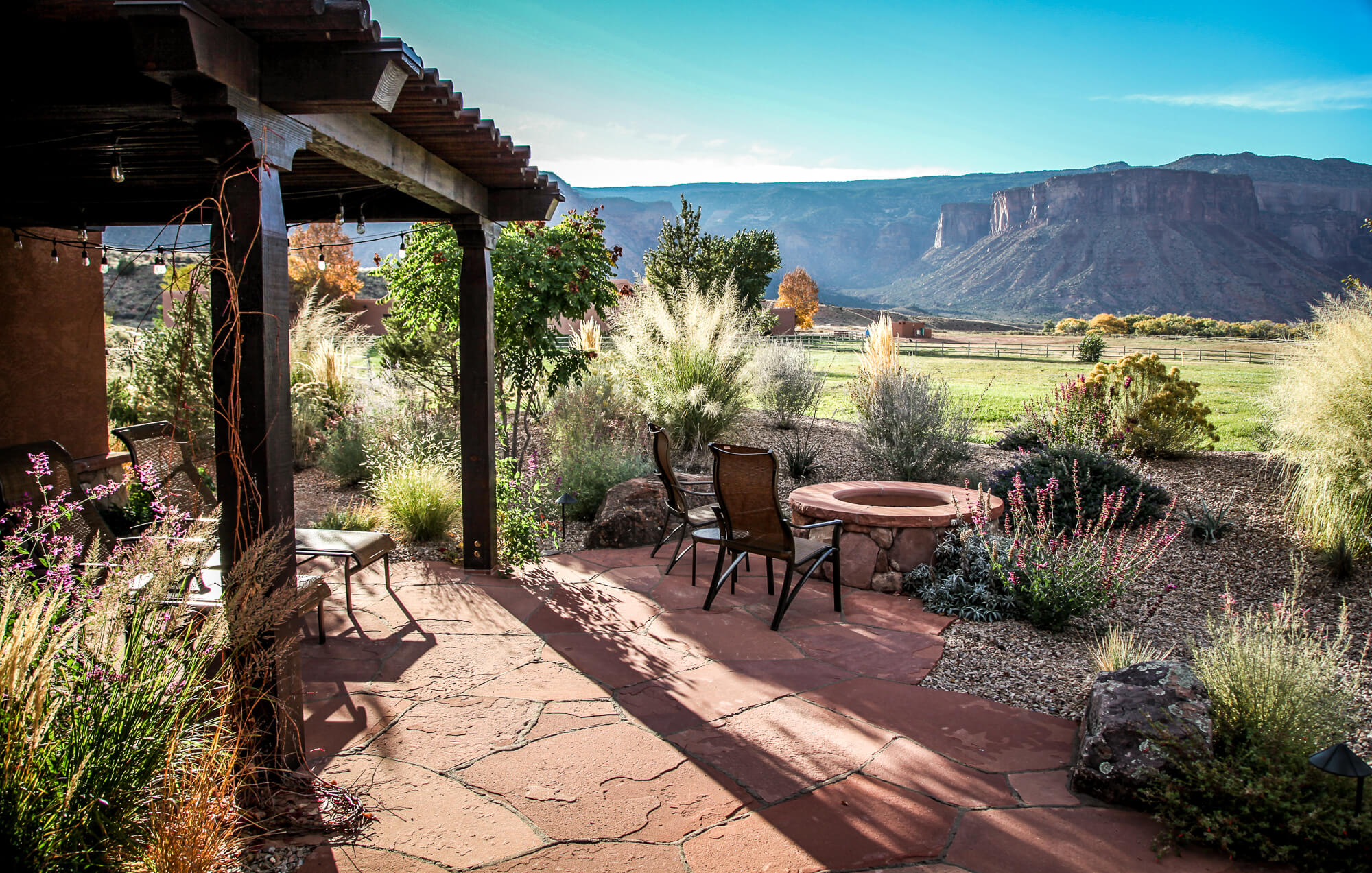 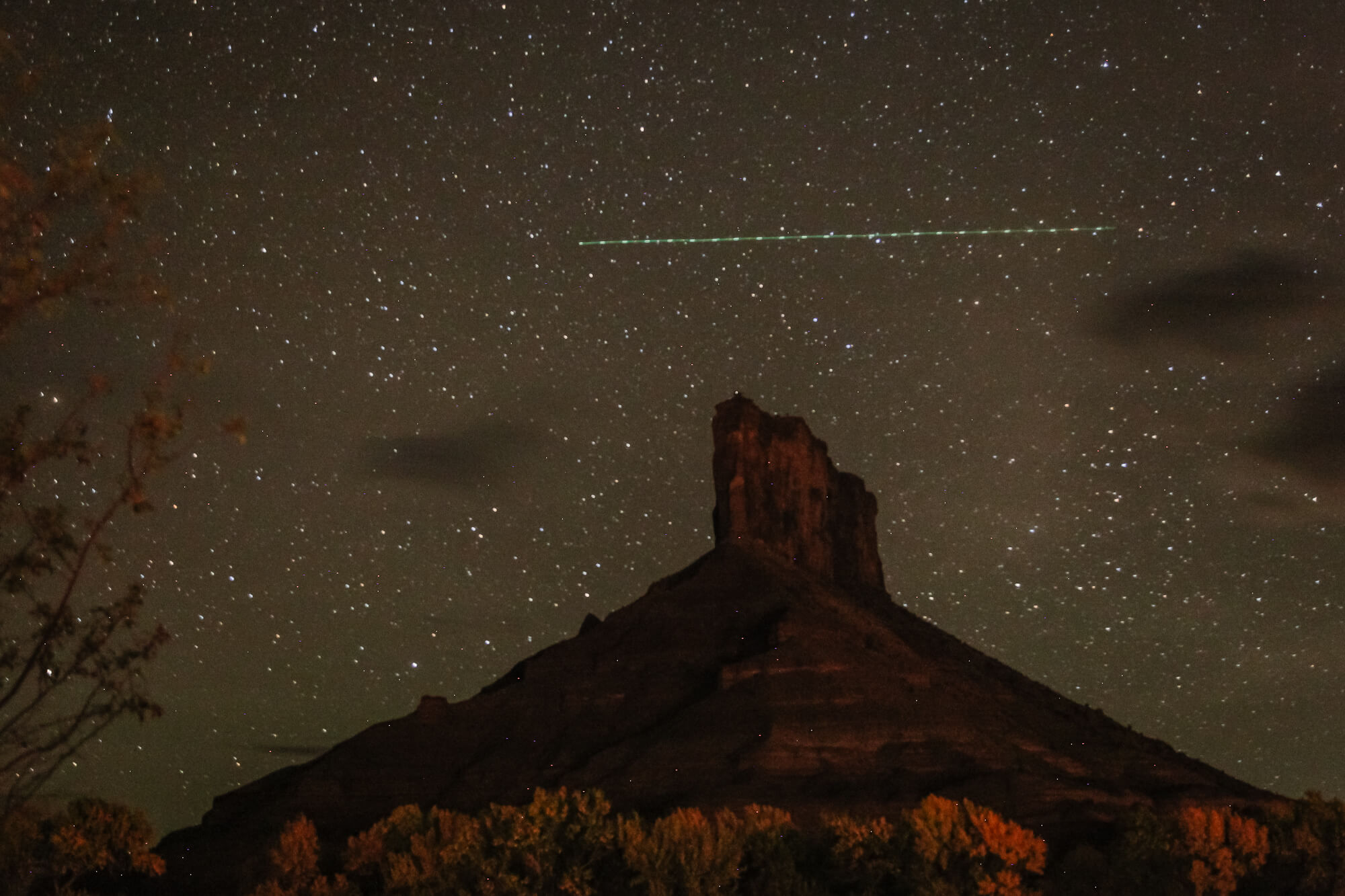 Okay, so this place isn’t the most amazing, pampering luxury resort in the United States, based upon my experience in 2014.

But the location is.

It’s a nice hotel in a cool spot, with amazing experiences to enhance it. Yes, the rooms are nice, plushed out, but more like a sterile Ritz would do in a second tier market. This feels more like a great hotel in Scottsdale: very nice, but serviceable, a little soulless, but in a really cool location.

Understandably, out here in the middle of nowhere, it’s hard to find good people, but they are nice and try hard, but don’t expect over-the-top pampering. I never felt like anyone was out front running the place. Or maybe because it started out as a conference center and those feels are still around?  I dunno.

The restaurants are fine, but not memorable (hence the lack of photos). The rooms are super nice, but could be anywhere. Look the other directions and you see a sea of parking lots for people who are not there. You wonder: did they hire an office park architect to design this?

But the views are what brings you here and all the very cool activities that you can do here and nowhere else.

And DO NOT skip the helicopter. It’s expensive. It’s incredible. Budget for it, like two grand and book ahead. And you should budget more time and money to do more than I did. They can take you to far off destinations in the middle of nowhere, serve you a picnic lunch in a canyon and fly you back out. It will be an experience you never forget.

Side note: gawd, what is it about America? If this location was in Europe, the town even smaller, the location even more remote, you would still have the most impeccable service and attitude that you remember more than the location. But this is America. 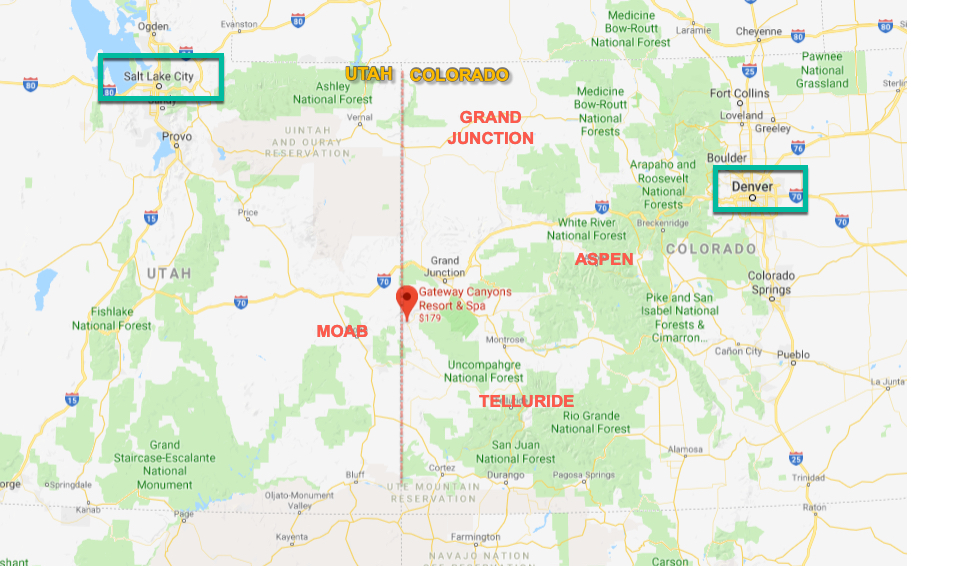 Here’s a great article in Forbes on Gateway Canyons. And here’s a background article in The Denver Post about how the resort came to be.

Here’s where you can book Gateway Canyons on TabletHotels. A mention and pretty pictures in Conde Nast Traveler. And an article about driving the fancy cars around in Robb Report (natch). And review in the Huffington Post. And if you’re looking for a wedding venue, this is it, says The Knot.