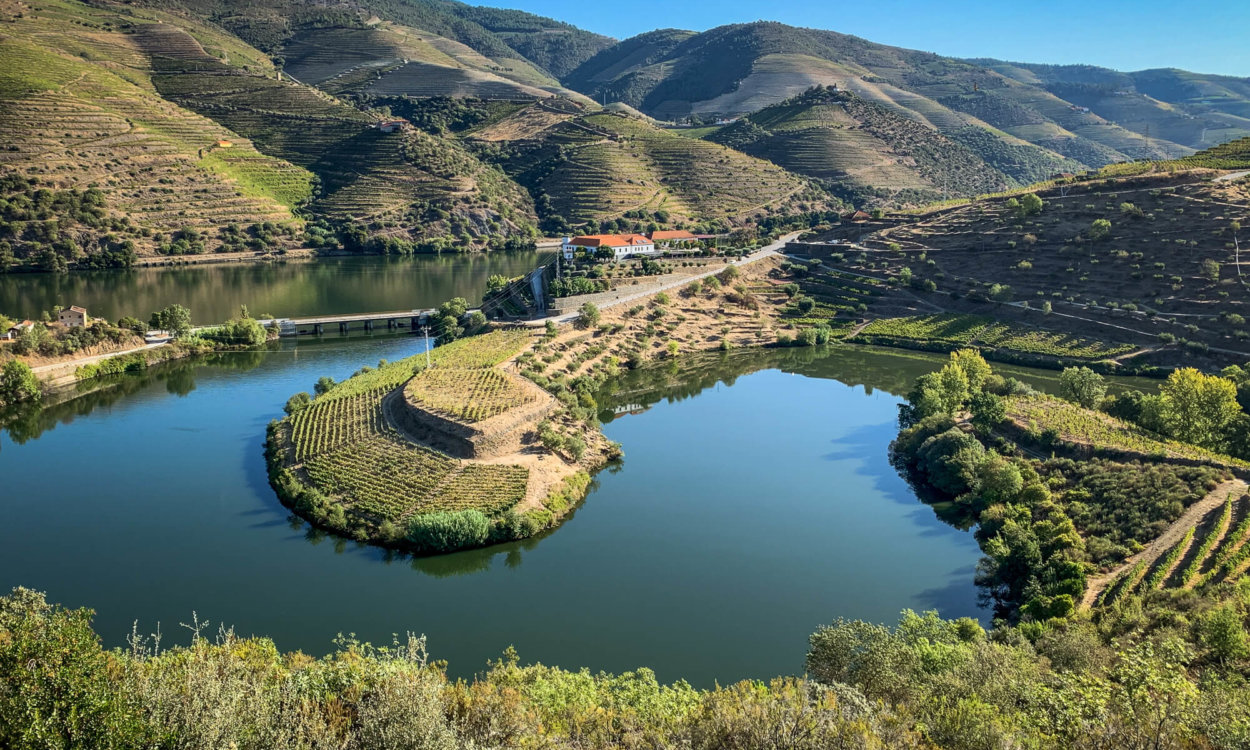 THE PERFECT BASE TO EXPLORE PORTUGAL’S DOURO VALLEY

[DOURO VALLEY, PORTUGAL] — After a harrowing Google Maps-led hair-brained shortcut through curvy mountains roads (umm guess who was Navigator 🙄), we arrived with our seasick passengers… ready for a drink. We drove through a gated entrance to a wine estate, wound up the road straight into the vines.

A teeny sign on the right said “Reception ↘︎”. We slammed on the brakes. (Groans from the back) “That can’t be it…”. What we couldn’t see was the building built into the side of the cliff below us. Unlike Google Maps, we trusted this little sign.

We fell out of the rental van, stumbled down the flinty steps and KABOOM. The view we were looking for. Just as Ana has prescribed. 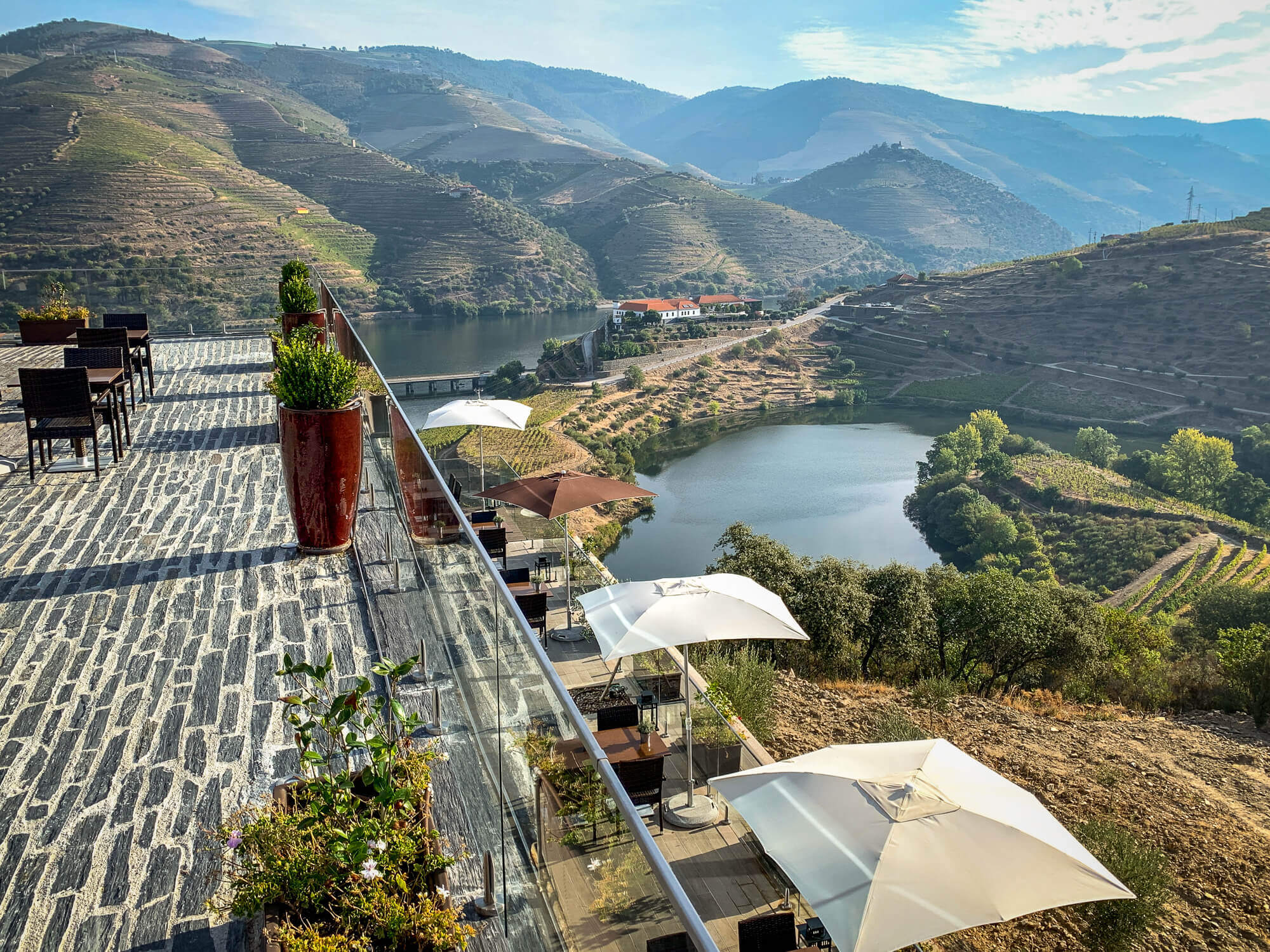 We walk into the Reception and restaurant and KABOOM again, wall to wall windows overlooking the Douro, terraced mountains on all sides. 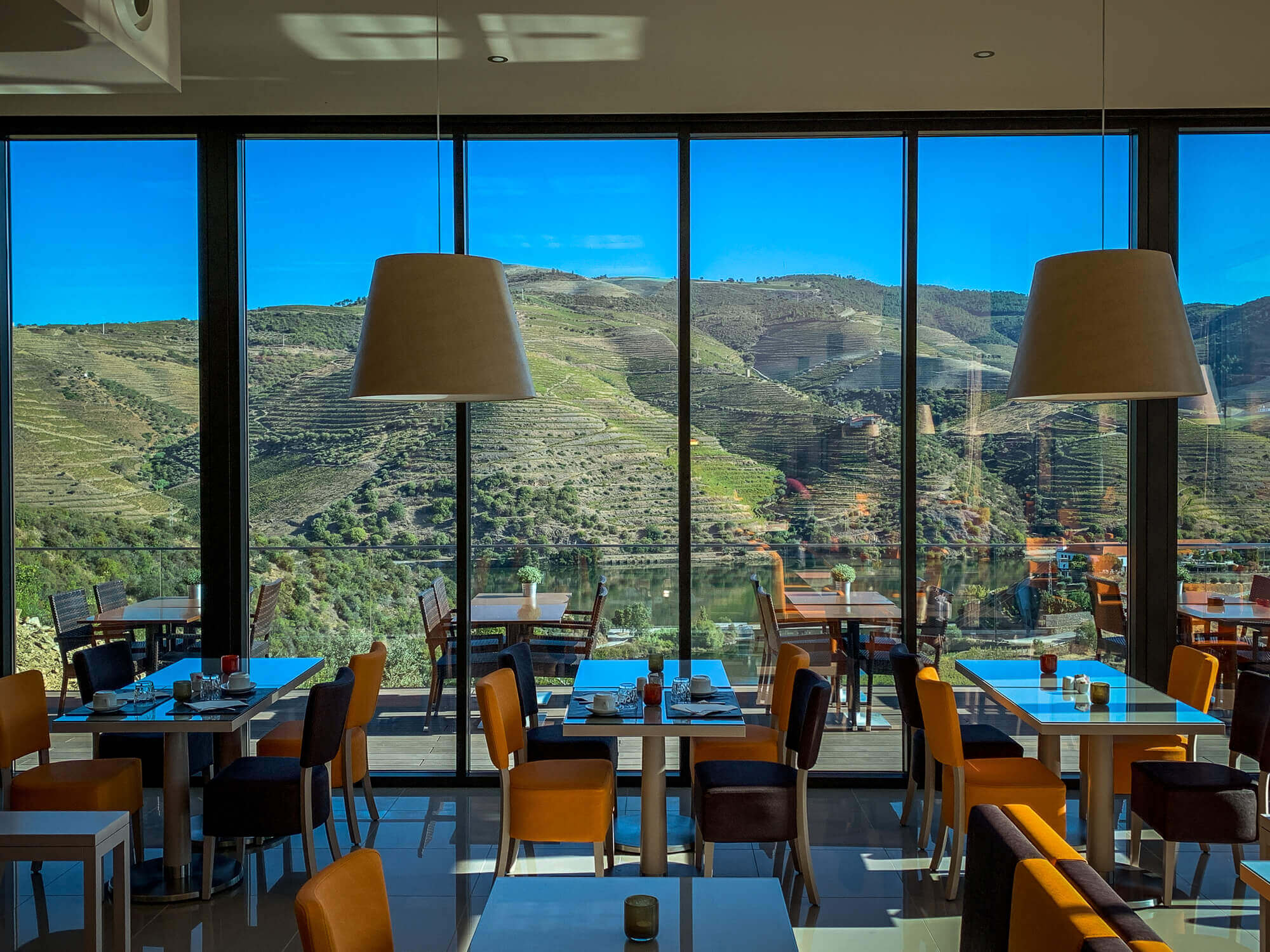 We Urgent Ordered some rescue drinks, checked into our rooms — they are way up on the mountain, smack in the middle of the vineyards — then trundled back down the hill to have dinner. (More on that later). 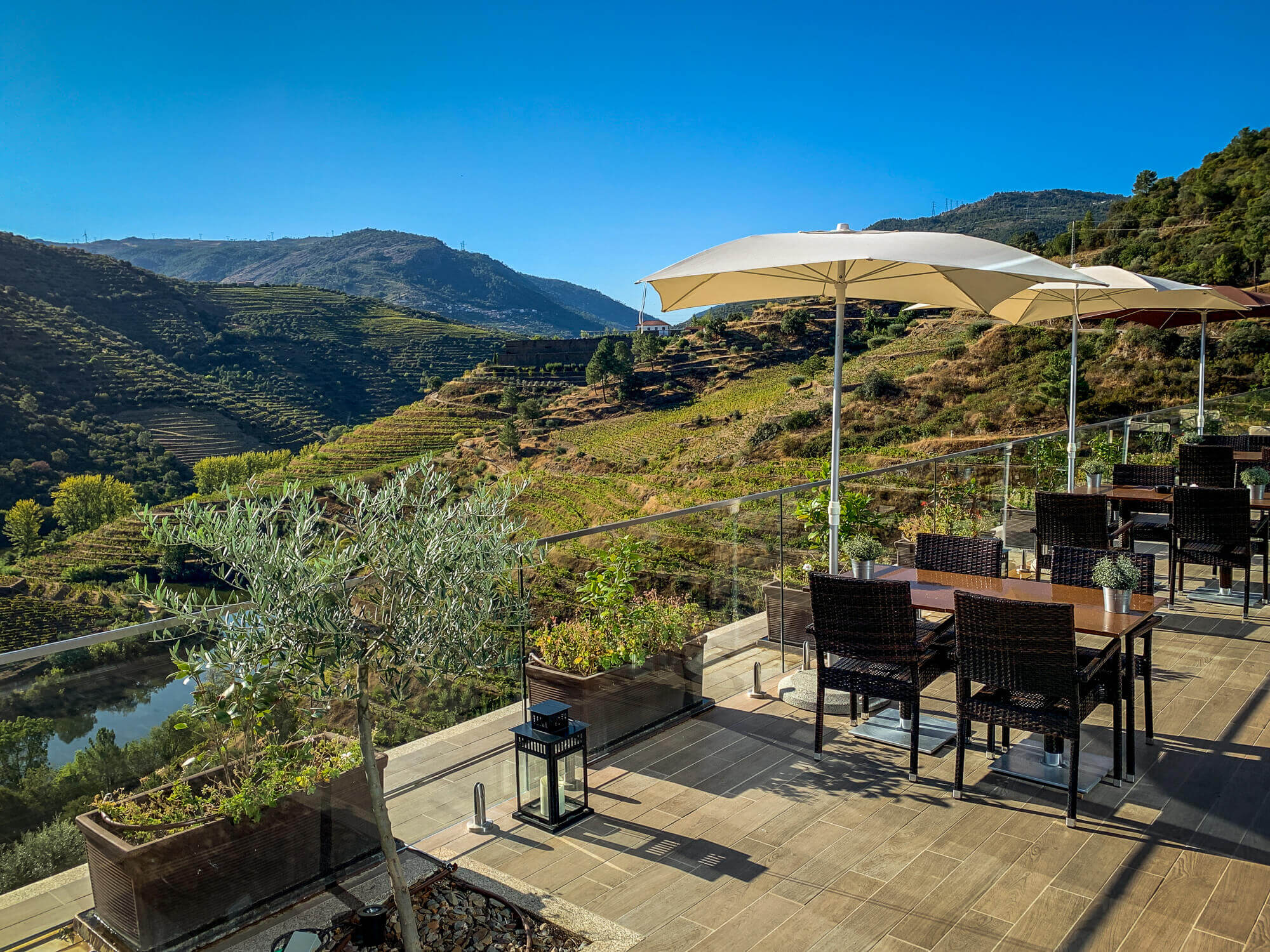 I woke up early with the September sun, the hills pink and orange with the forthcoming sun show. With matted morning Terrier Hair™️, I took a walk around the rooms and sweet pool (!) to watch the sunrise. The purple and blue valleys turned golden as a longboat cruise ship slowly puttered around the bend. The moist, sleepy grape vines waking up just as I was. 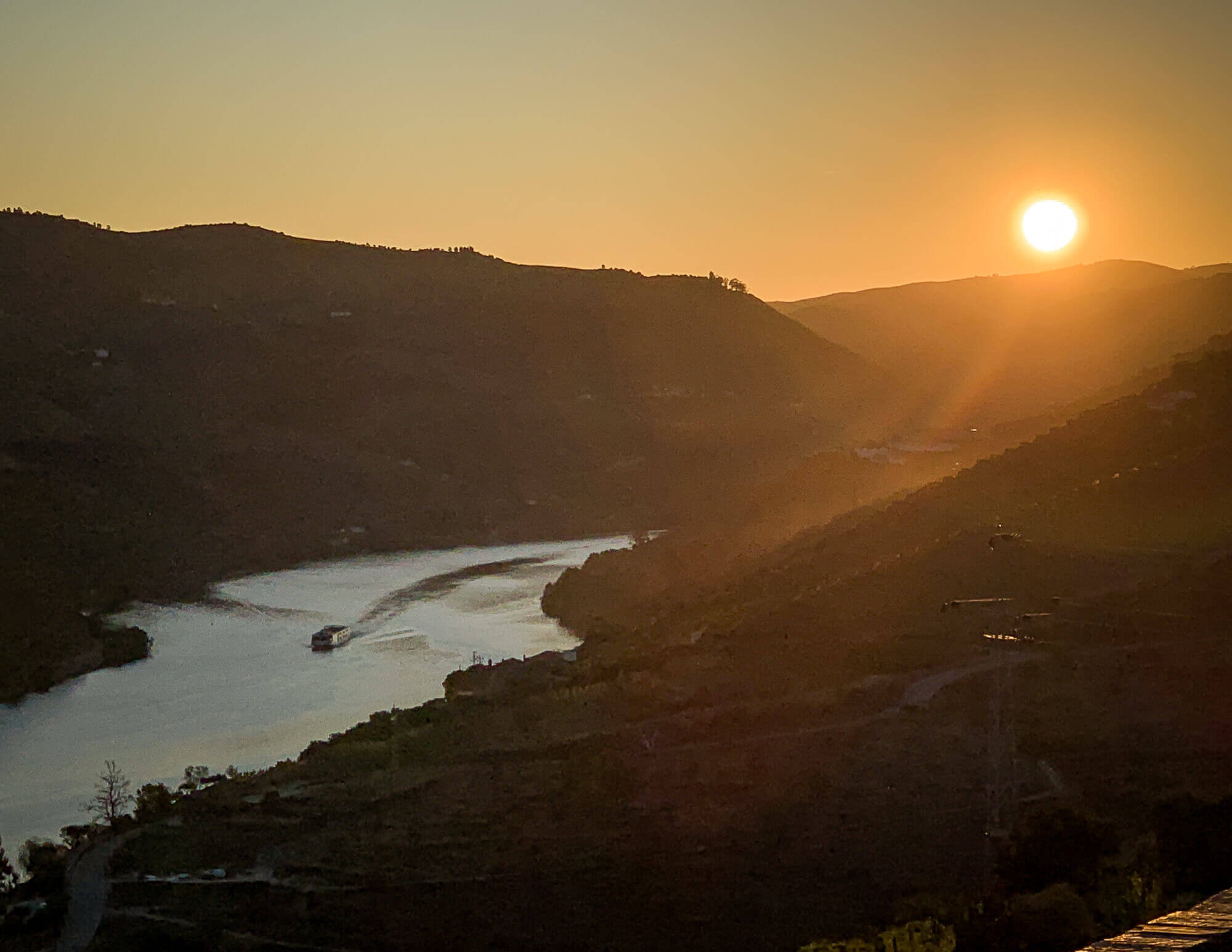 Everybody else was still sleeping. I had this all to myself. Even the cruise ship silently slid beneath me, not making a sound. Rows of vines snaked off in all directions. Just me and the sun. The pool as still as a frozen lake. 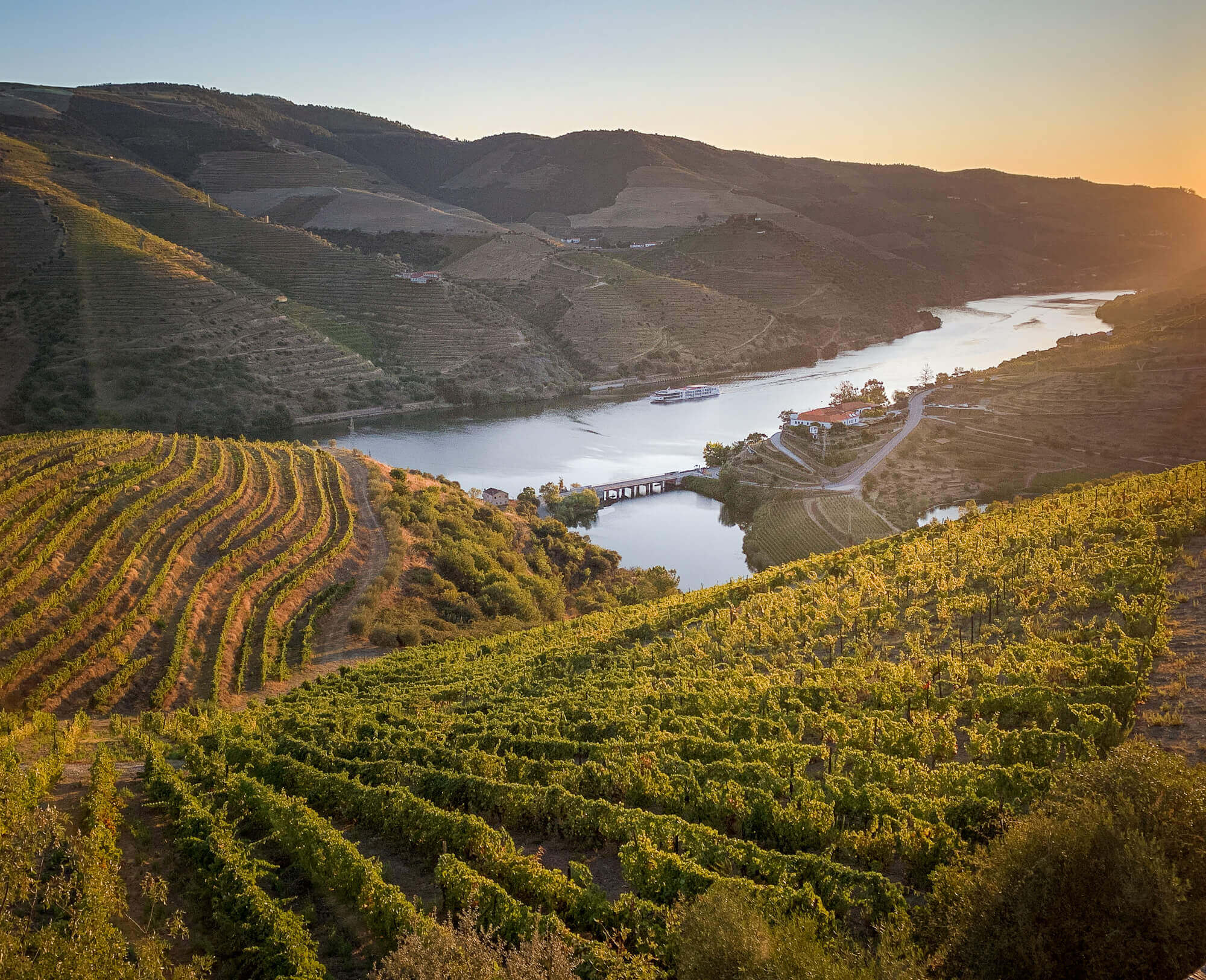 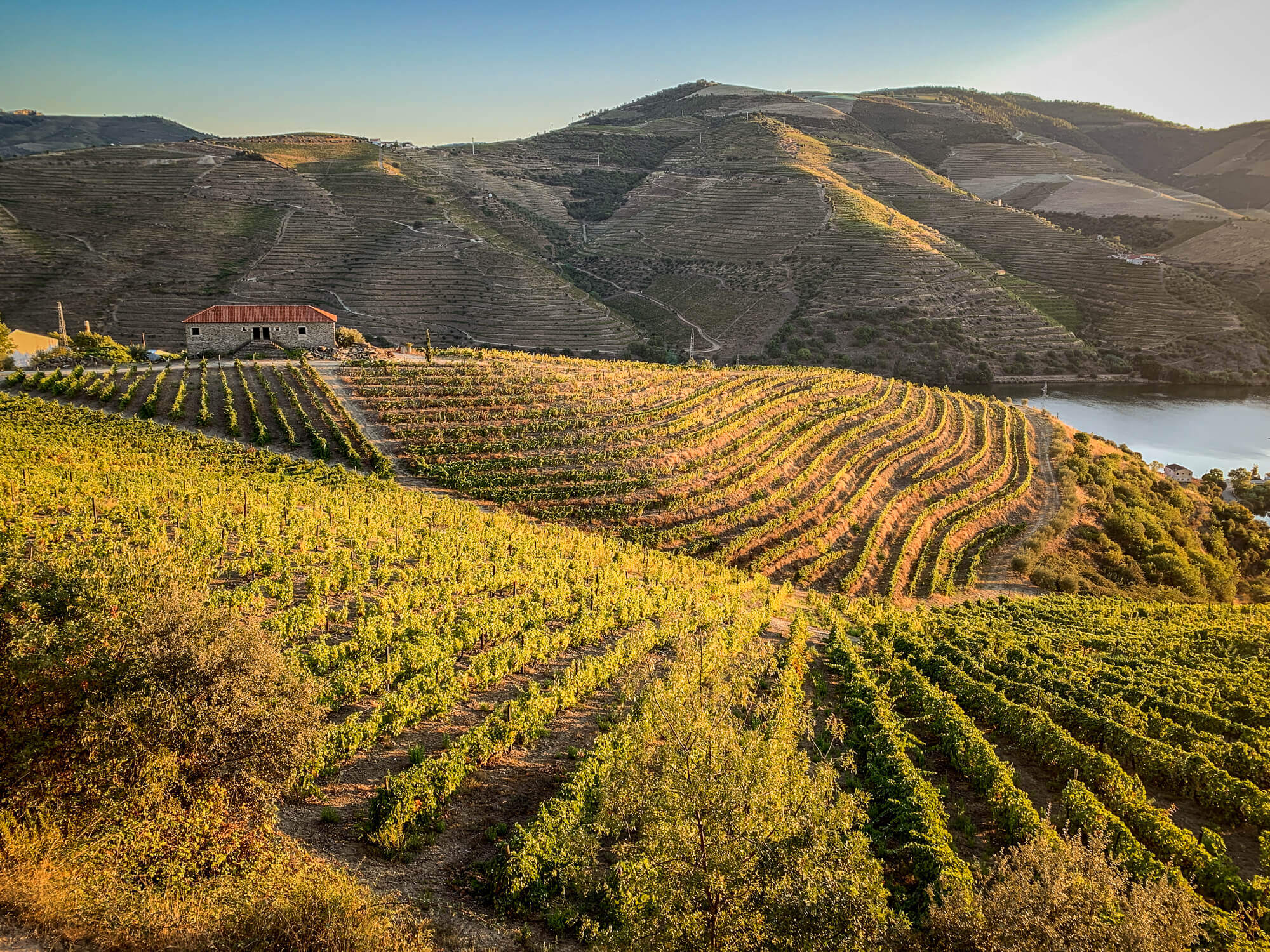 Vila Galé — the Perfect Base to Explore the Douro Valley.

There aren’t many hotels in the Douro Valley, a few old stalwarts, a few pousadas, a bunch of Airbnbs and BnBs and one Six Senses, which we tried to get into but was booked.

But Ana Carvalho, the co-founder Douro Exclusive — our tour guide for the next two days — suggested we stay at a new hotel that just opened, The Vila Galé. On a ridge overlooking the Douro. “It has a fantastic position overlooking the bend of a tributary. The perfect base to explore the whole valley. Book it and I’ll come pick you up.” Boy oh boy was she right. 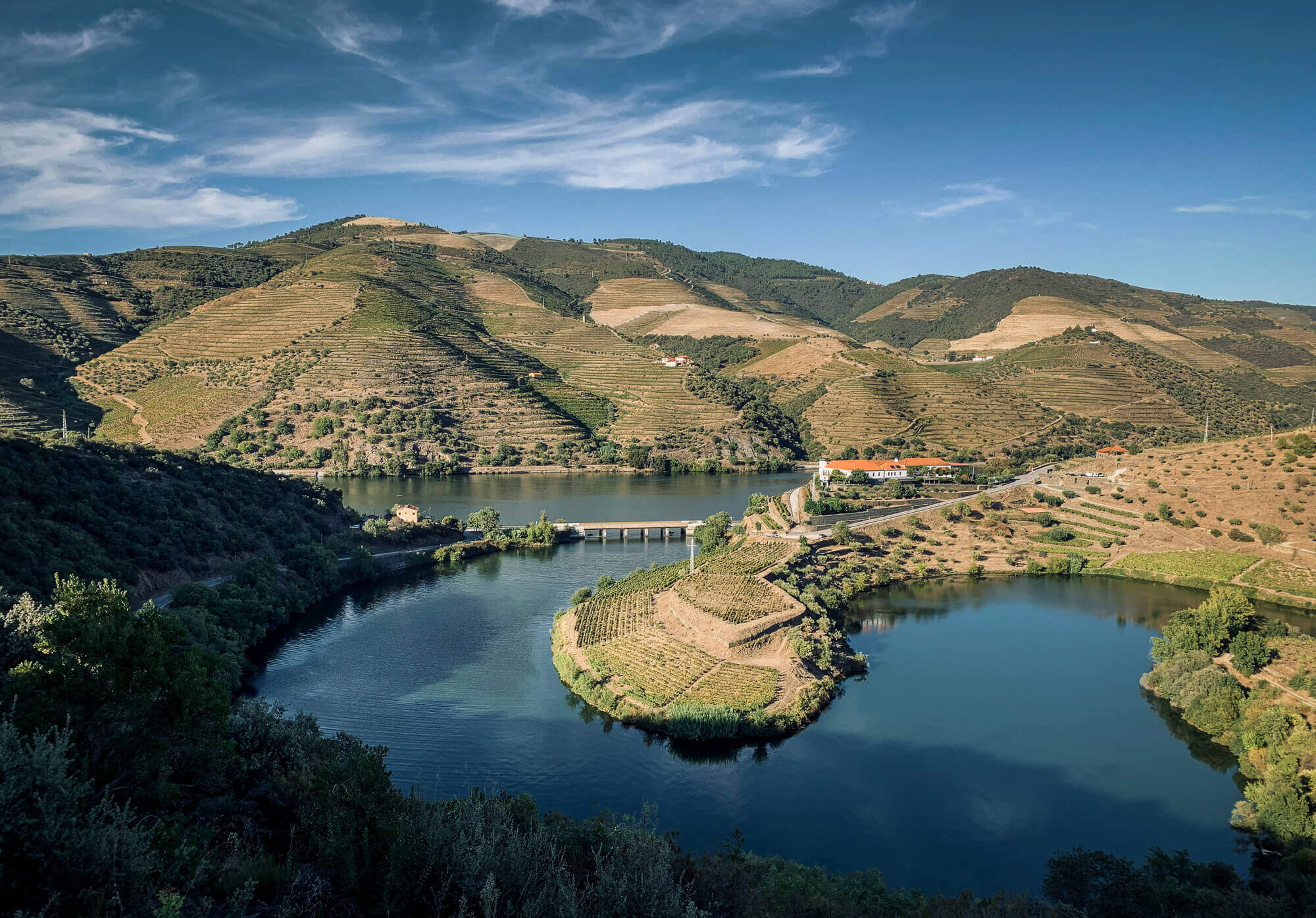 The sunset is the best time for an aperitivo and watch as the shadows move across the river valley. 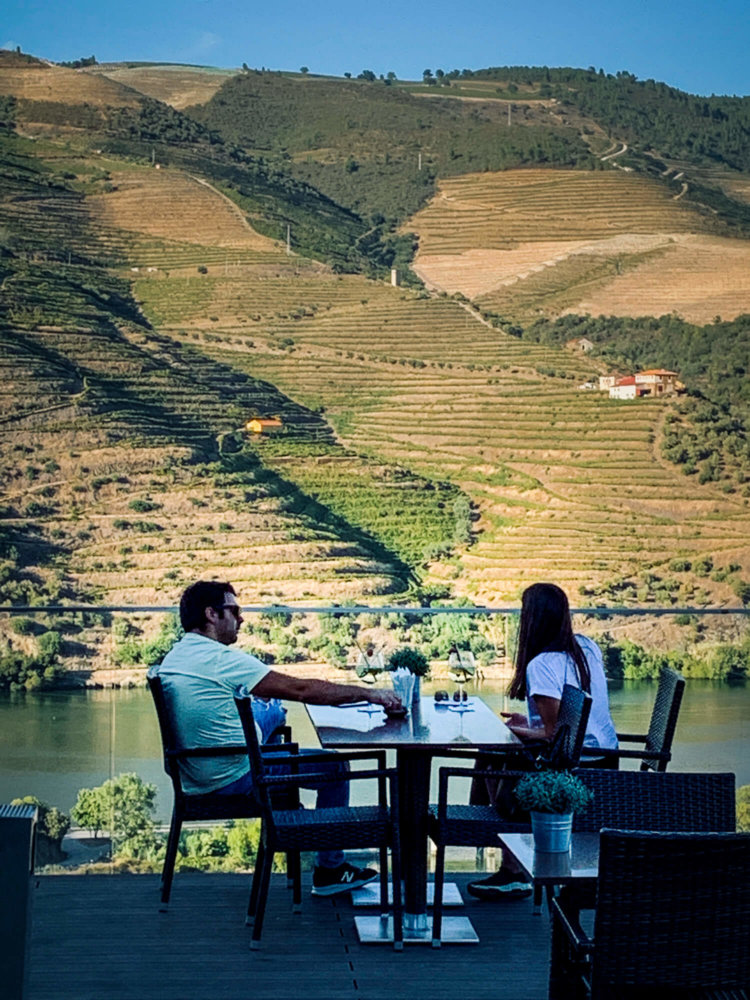 The hotel was only four months old at the time, (this was early September 2019) so it still was a little sterile and needed some kinks worked out. They’ll figure it out. But our hard-working waiter/barista/bartender/friend Fernando was there day and night and was a total delight in dealing with us. Breakfast, lunch, dinner… we roll out of a long boozy dinner at 10:30 and he was there at 7am, smiling the whole time. And he’s a first class mixologist, teaching us his methods for the remarkable Gin-tonics with juniper berries and a sprig of herbs for our snouts. He made our stay great.

Ask for Fernando, master mixologist. He made our stay great.

Besides the incredible views, the central location of the hotel is perfect base for exploring the Douro River valley. Just a few miles above the bridges of Peso da Régua. From here it’s easy to shoot up the river to Pinhão and other important wine towns. 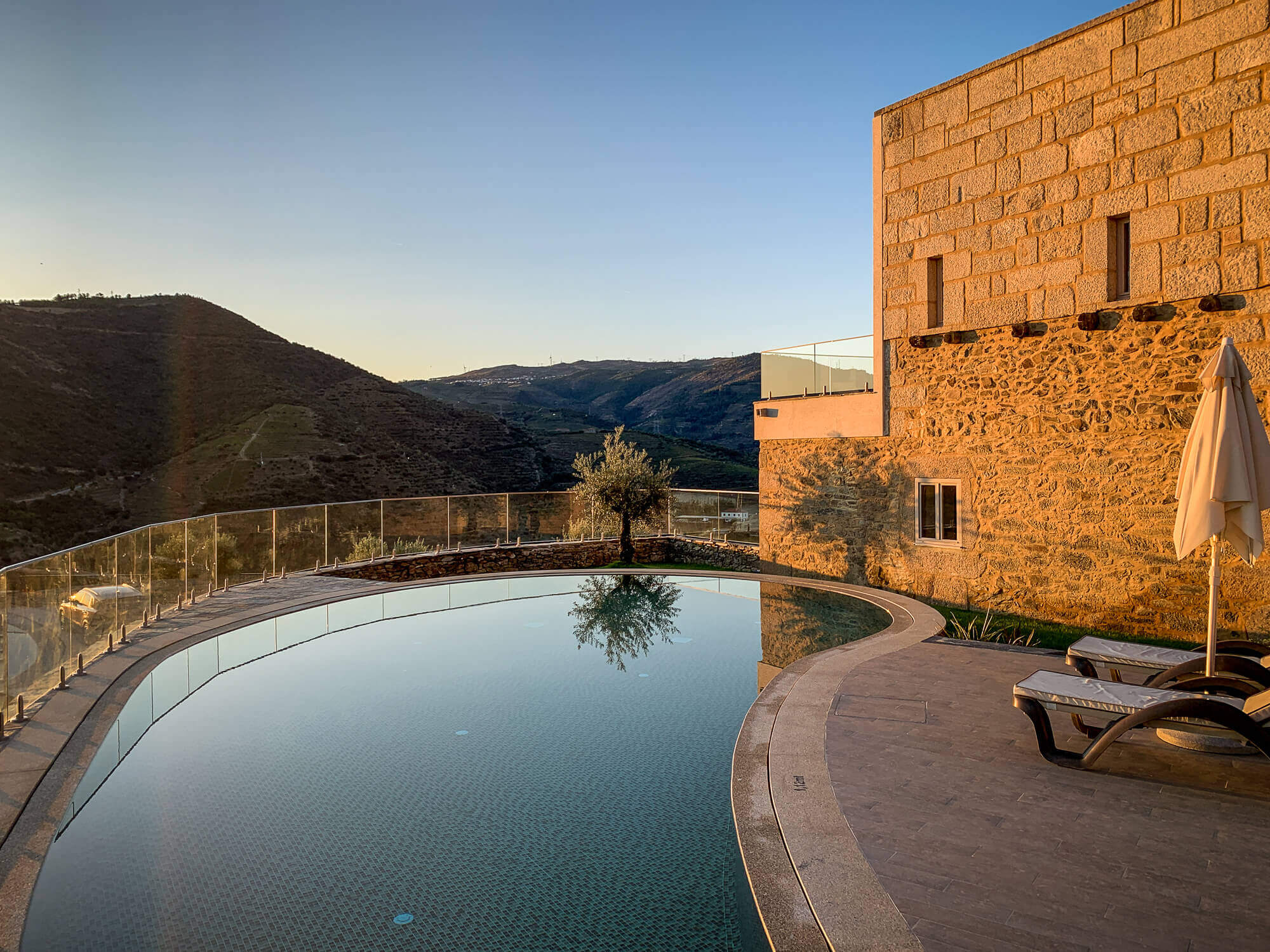 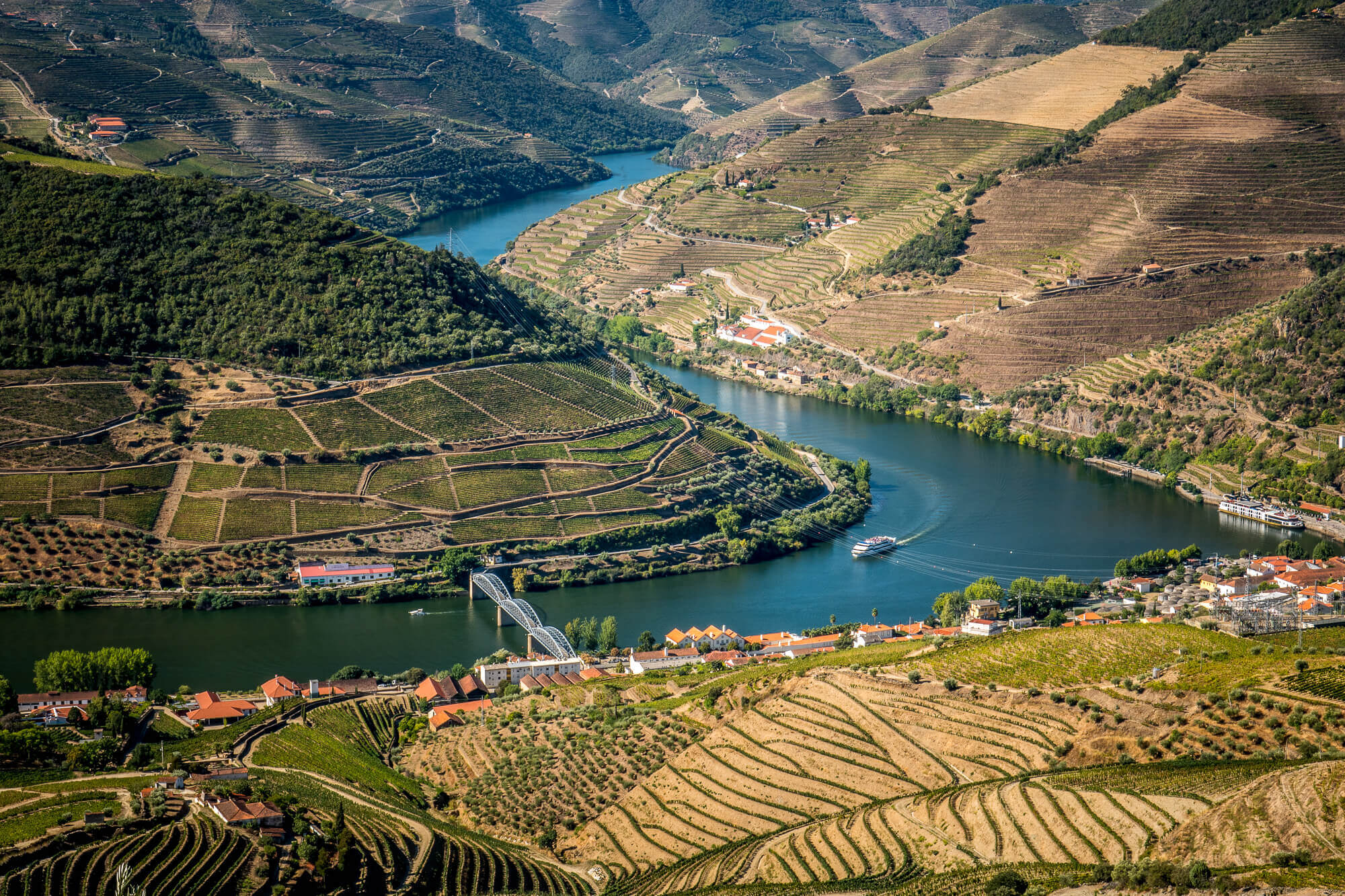 Truth be told: wine tours bore me. I love wine, drink it and numerous other things everyday. 🤪 But I get cross-eyed with all the “Was this aged in oak or stainless? And for how long? How about this one?” Really? 🙄 Poke me in the eye with a stick, let’s drink!

But I was back again in the Douro for a wine tour! I was last here taking a tour with them both, on my six month European sabbatical in 2015. It was so memorable, that this time dragging some wine-love friends from a year abroad studying in Rome. That’s how good Ana and her husband Marco are. They co-founded Douro Exclusive, the best tour guides in the valley. They grew up here, went on to successful business careers, but came back to show the world how incredible this place is. The stories and history of this winding valley are so fascinating. When you look at pictures, all the terraces look more like rice fields in Vietnam, not this perfect corner of Europe. 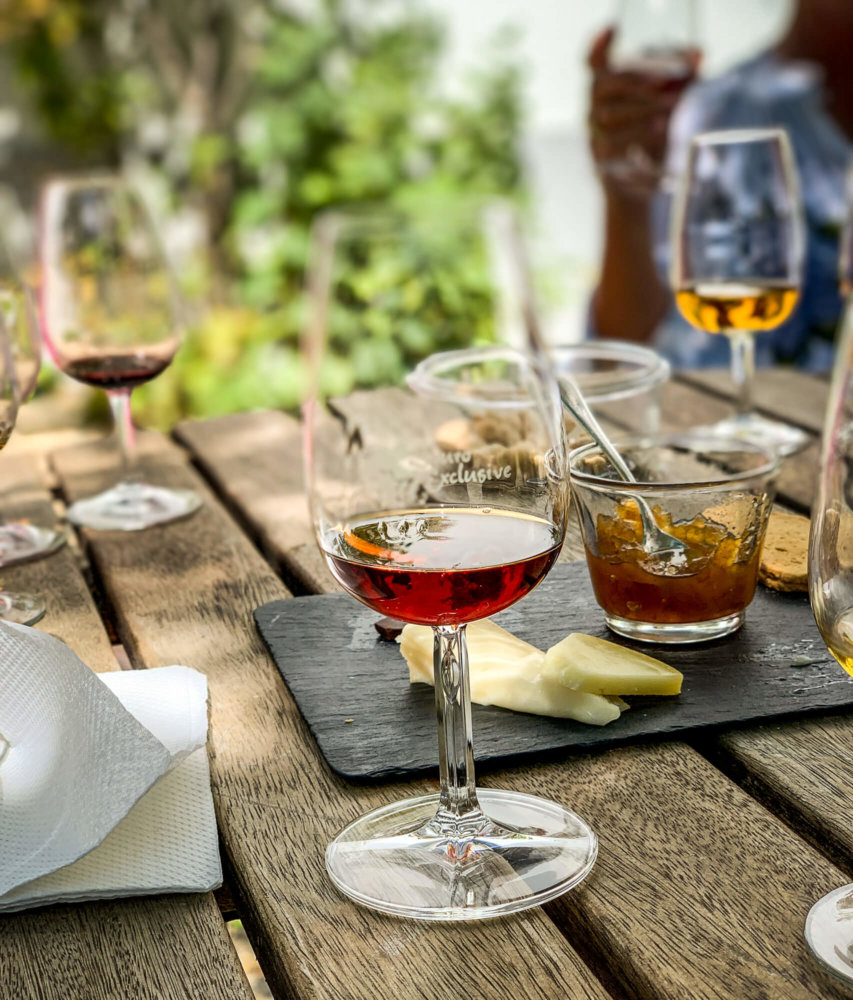 Quinta do Panascal was where we stopped for our Port Education. Surprised by dry ports, white ports and old ports. All lovely.

Ana’s stories and insight about this region converted me, made me really appreciate it. The Douro wines are now my favorite, even though somewhat hard to find (at least in the States). Because the region is underrated, you can find some killer values with great, complex wines. A lot of people think Douro Valley is just port wine – we were most surprised by the white ports as a cocktail, the dry ports as the super leggy ones — but there are some absolutely killer reds grown here, in Alentejo province and other pockets of Portugal. 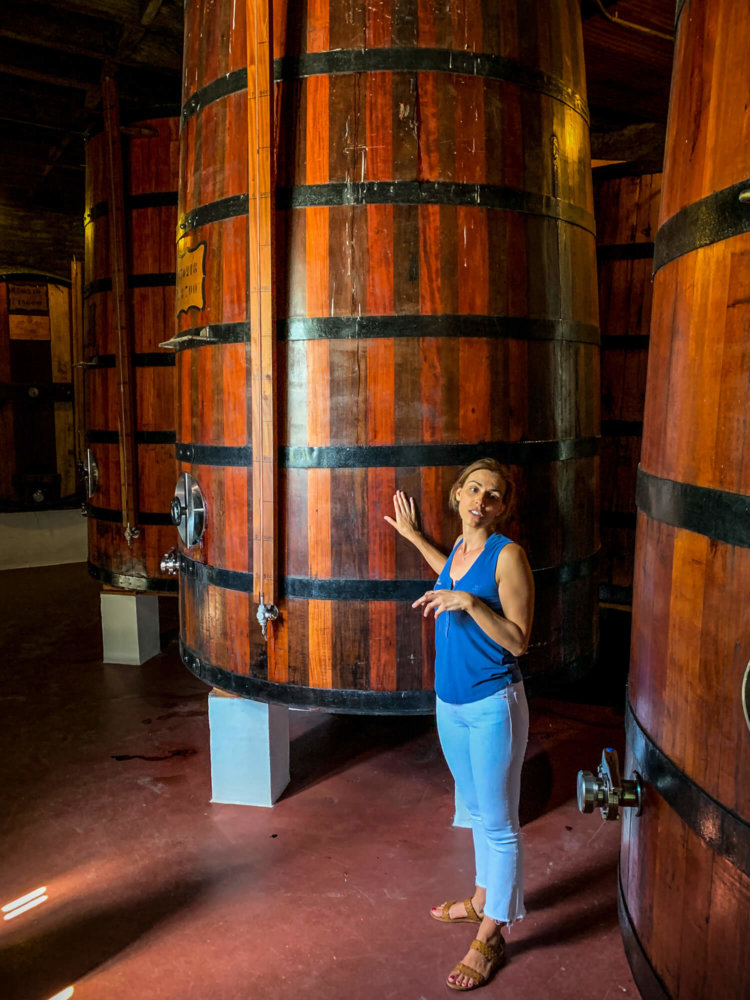 Ana takes you exclusively into wineries from friends she knows. She is so knowledgable that they let her lead the tours herself.

One of my favorite parts of our tours was getting down on the river for a quick boat ride around the bendy parts. 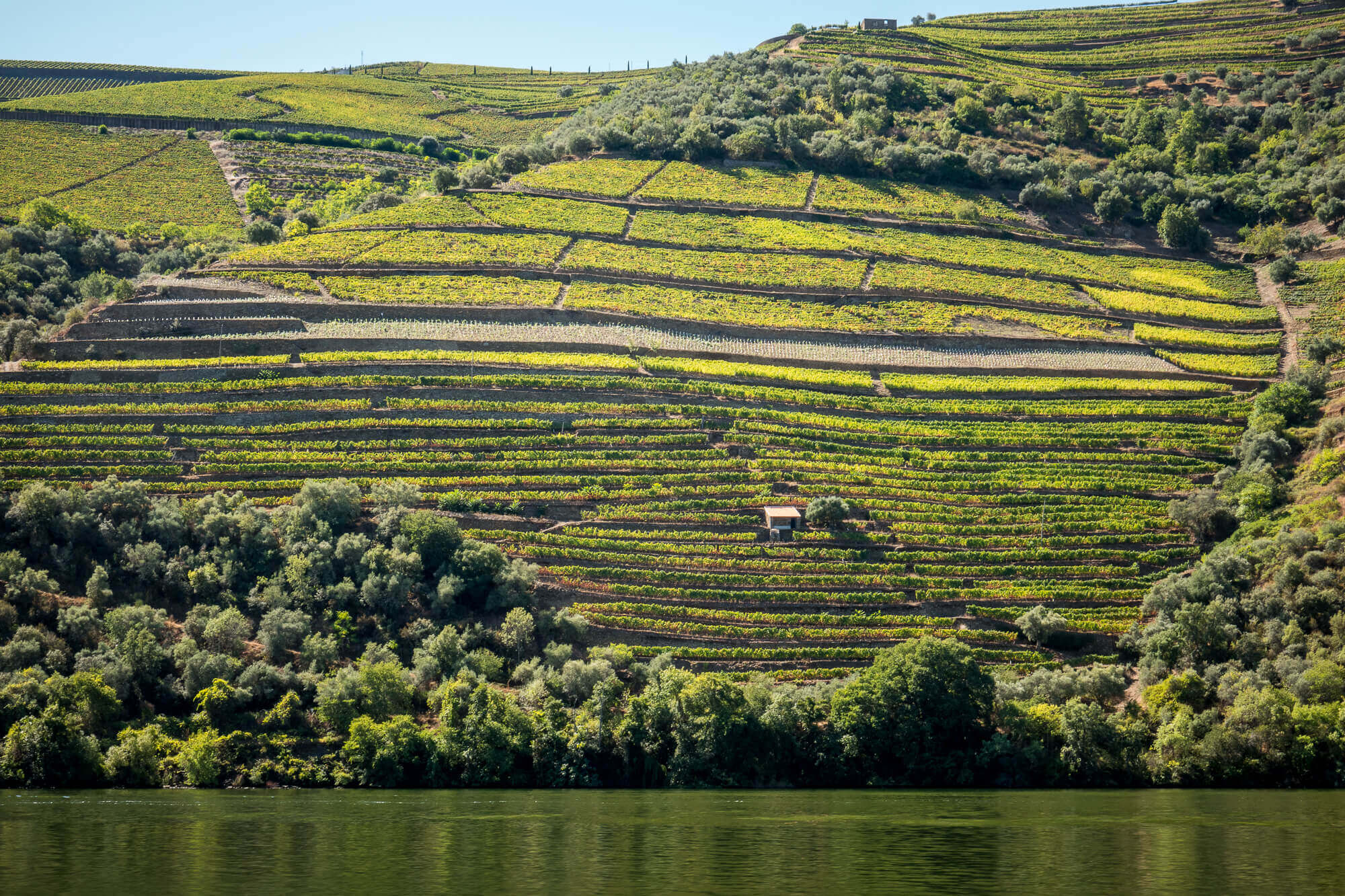 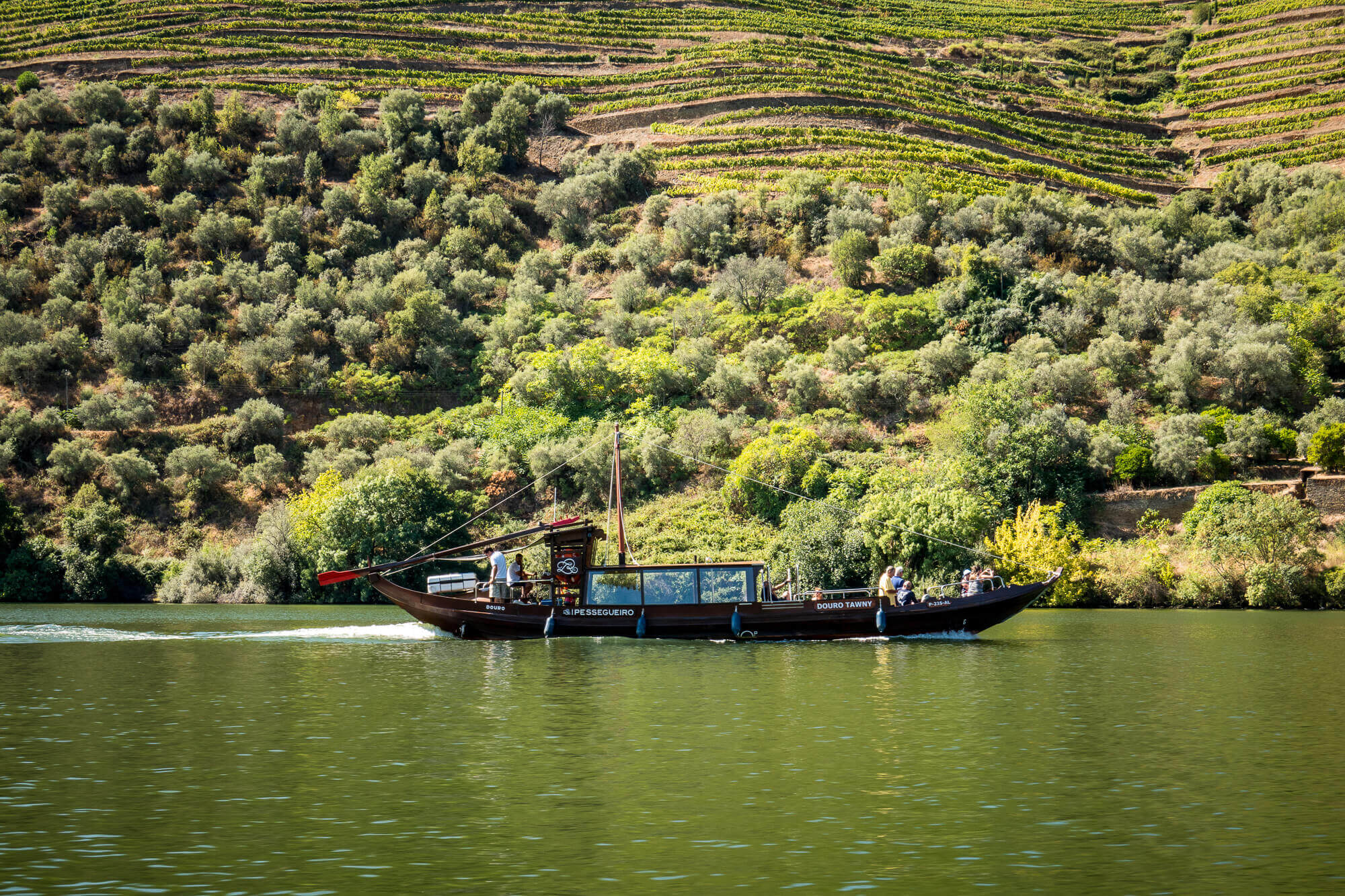 I like Douro Valley wines the best. They are inky black, but dry as a bone, not jammy. Most of the Douro wines are red blends, sometimes mixed with six, eight, ten, fifteen (!) different types of grapes. 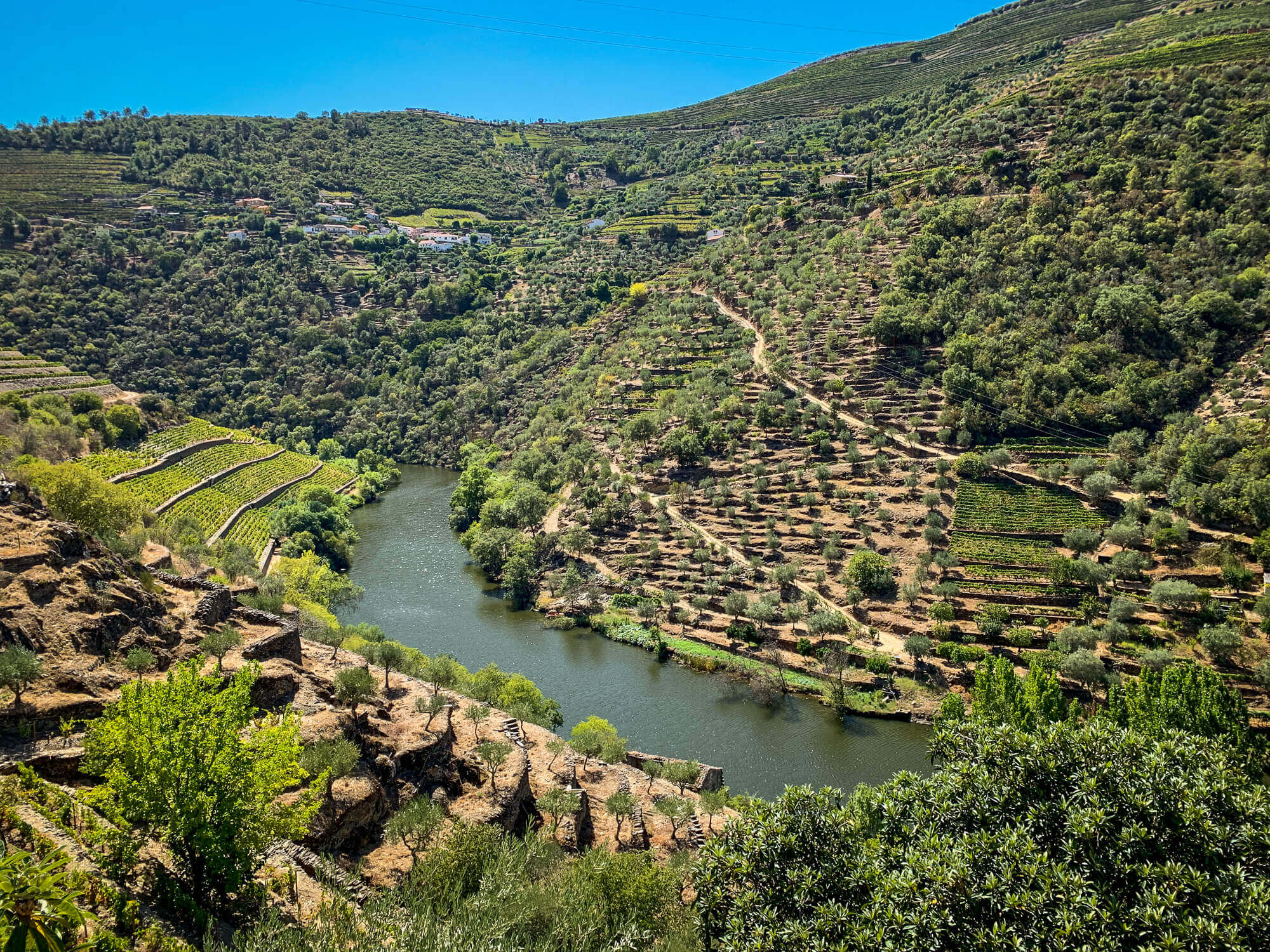 This valley is one of the most stunning in person. Dead calm winds, silent river, the acoustics are just phenomenal.

These vineyards are so old — they go back to Roman times — that they are mixed with all kinds of grapes, many unique in the world to this region. They call them “field blends” but they don’t actually blend them in the fields. These vineyards go back centuries, long before modern viniculture. The different types of grapes are grown all mixed up in the terraces, then crushed together. That to me was very interesting. Maybe because it all ends up as wine.

Here’s what makes Douro wines so unique. All of the hills in this region are up-tilted layers of flinty rock and shale. Barely any topsoil. But because they are at an angle, the vines up can send their roots deep into the ground wick up moisture. 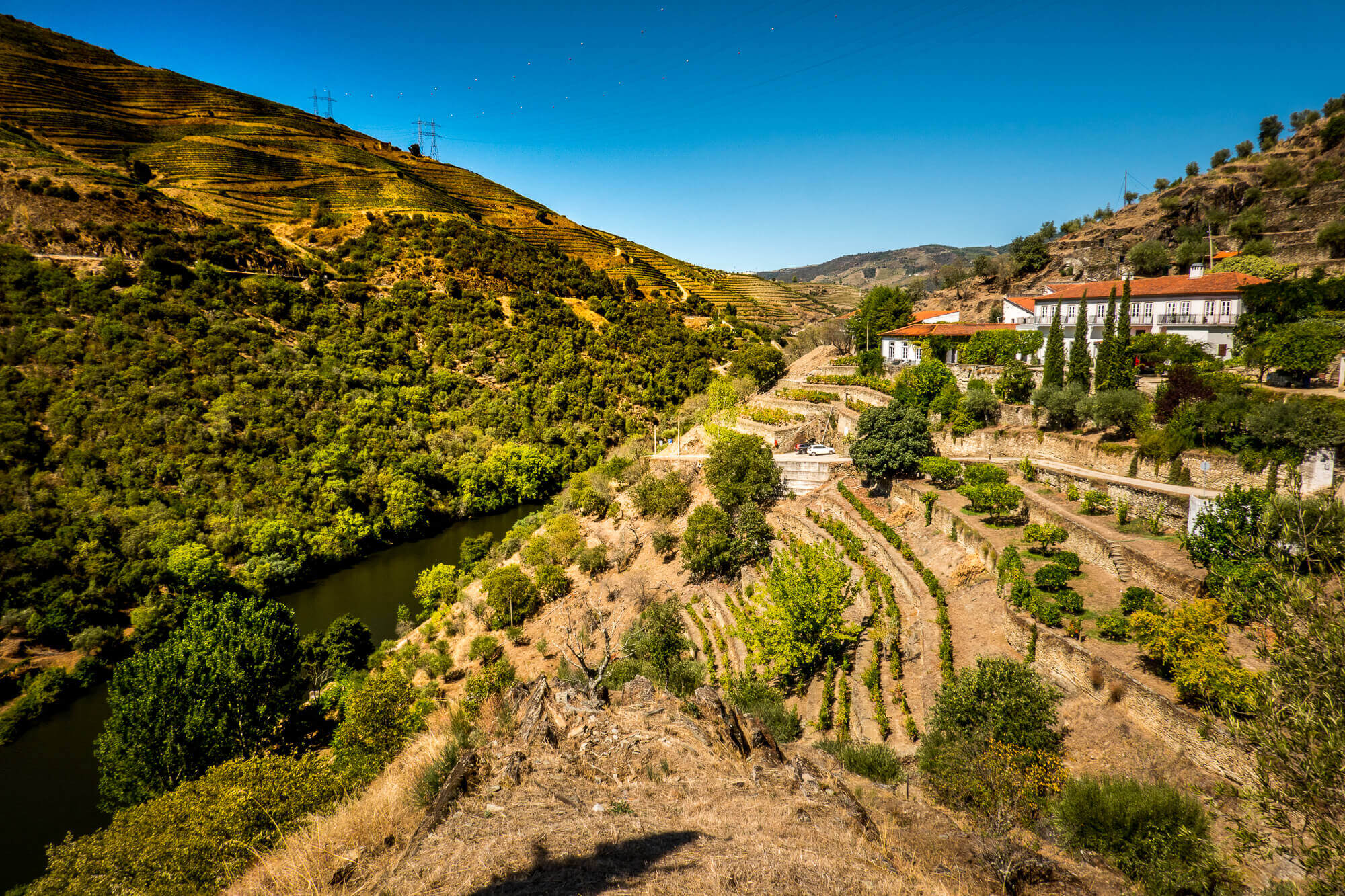 Just can’t get over this picture perfect view. The BBC called it one of the best views in the world.

Finally, my airplane cold caught up with me and I had to miss the second day of adventures. But everyone raved about it, having a long lunch cooked by the owners of one of the wineries they toured.

A Must — Eat at DOM on the Douro River 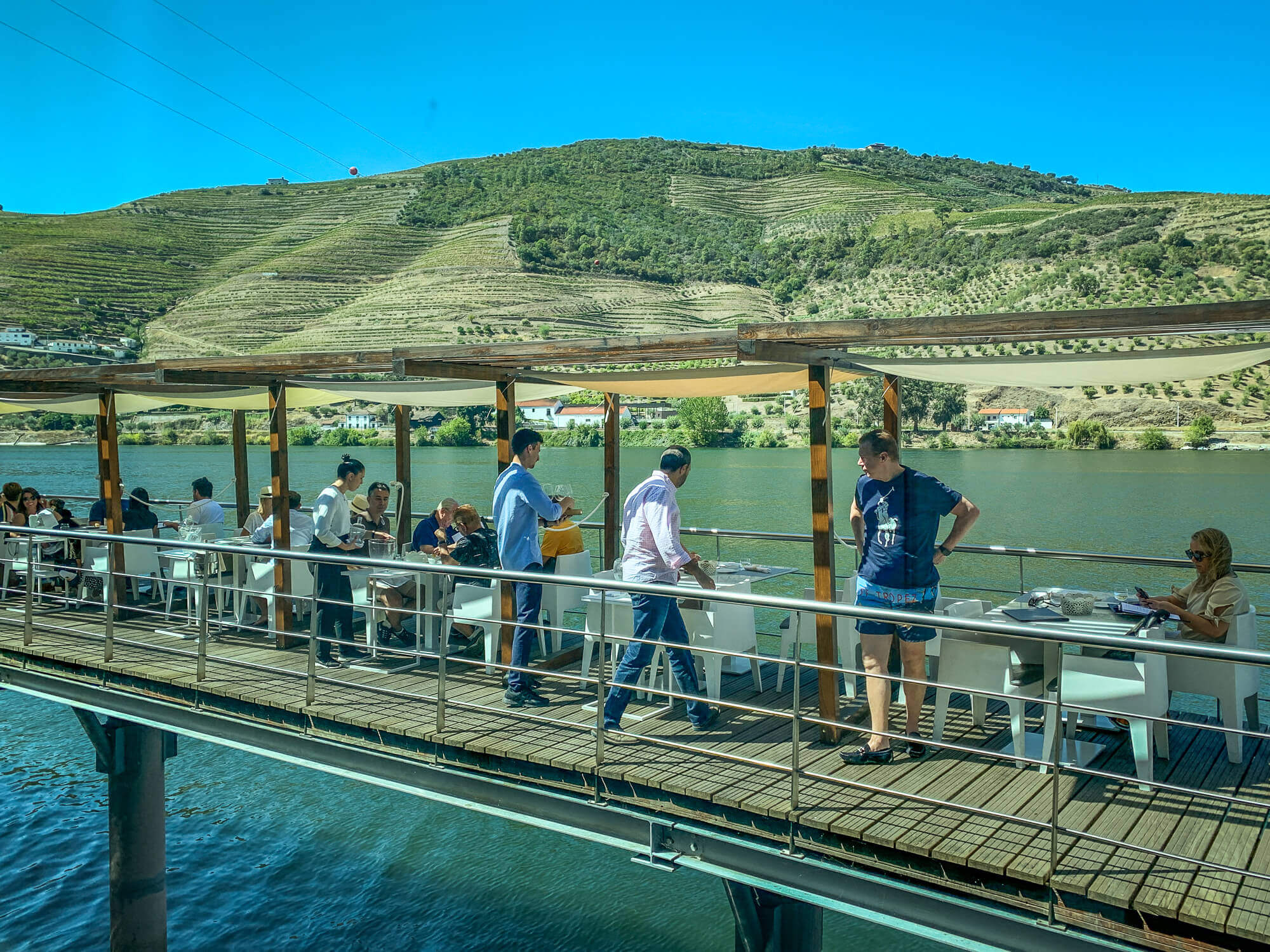 Built right on the water, DOM is a gem. Doesn’t look like much than a box from the road, because it’s a busy road, but then you enter and the whole place is open to the river. The chef, Rui Paula, is one of Portugal’s most famous, with several sister restaurants in Porto and elsewhere. Incredible service and food. 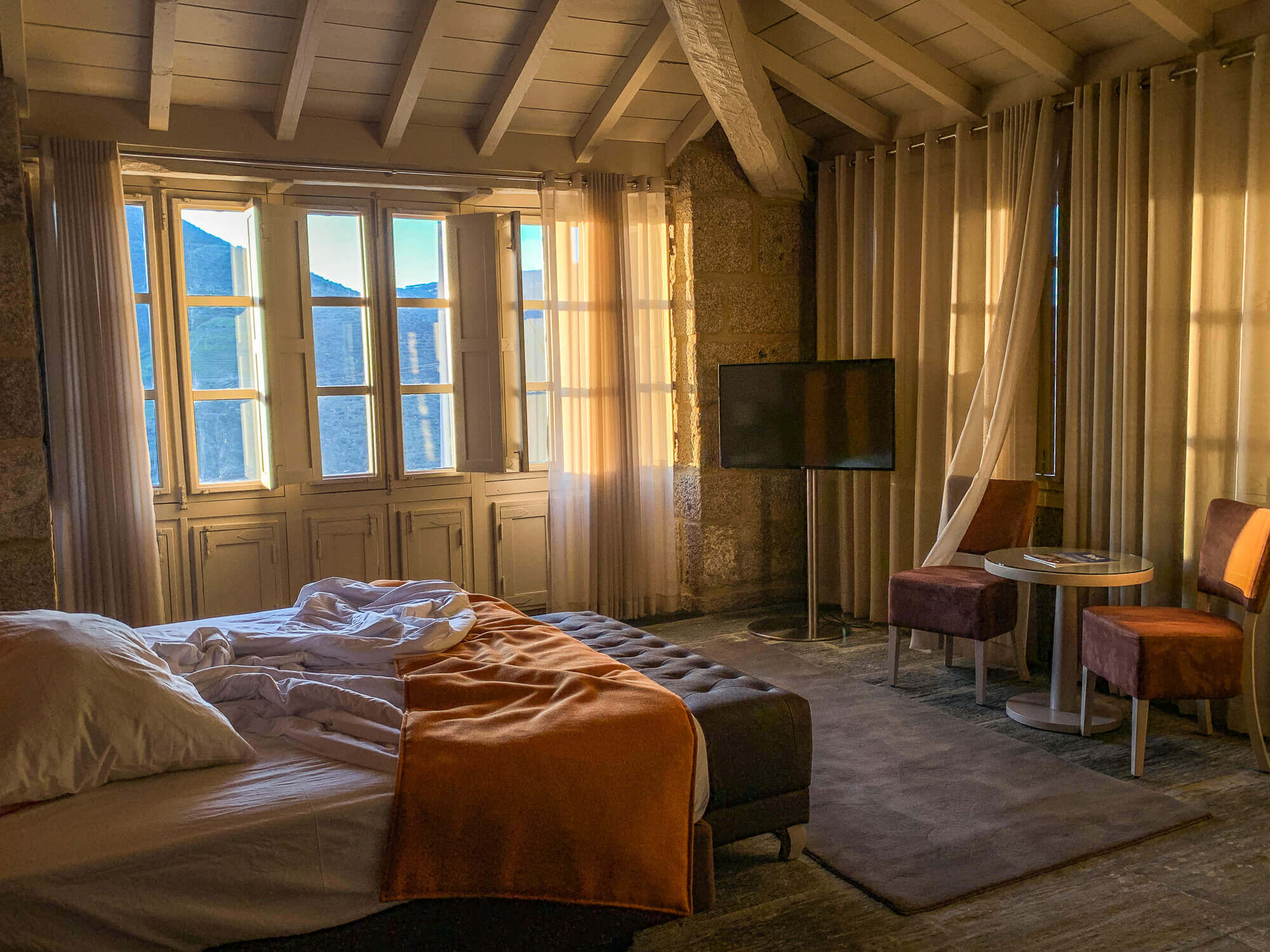 The rooms and buildings are all super modern and brand new, even a bit “business hotel sterile” but I got the luck of the draw and had a big room made from the old wine estate’s kitchen, loaded with charm. And killer views.

The hotel is staggered up a hilly working vineyard, with Reception and restaurant on the lower building. And big modern rooms in a separate building way up the hill, carved into the hillside and nearly invisible due to the cloaking powers of the native flinty slate stones that cover nearly everything. All the vines are planted on slate, so why not make a hotel out of it? 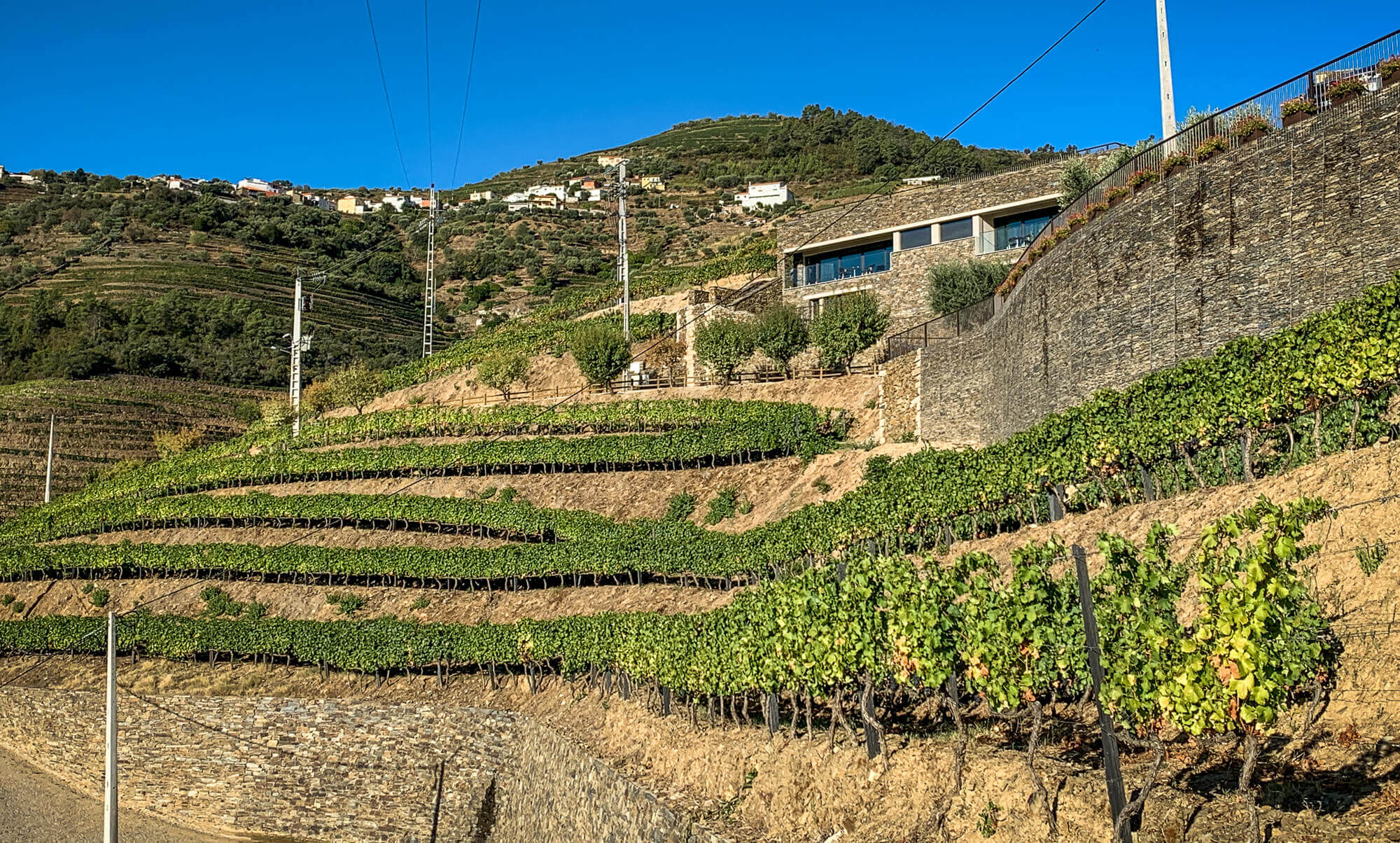 You are right IN the vineyards, in fact we were there for harvest in September and awoke in the morning to the soothing chitchat of the Southern Italian pickers below our windows — which is confoosing since you are in Portugal.

The rooms are build around different buildings up the hill, about 3-5 per building.

They put the room building high up on the hill so you can get views like this.

Big drawback: the road up to the rooms is very steep and narrow — they put the room buildings way up on the hill for the best views — but that also means you have to get up there… particularly a challenge after a boozy dinner. But they have a shuttle that’ll run you up the hill. But it is a pain to have to call for a van and wait. Also, not much in the way of stocked fridges or ice in the rooms, nor room service… so you are kind left high and dry. We about wore out their brakes and tires for our endless calls of “More ice, por favor”, so factor that in on your Negroni and Spritz hourly consumption.

The rooms are huge, but they all have incredible views. 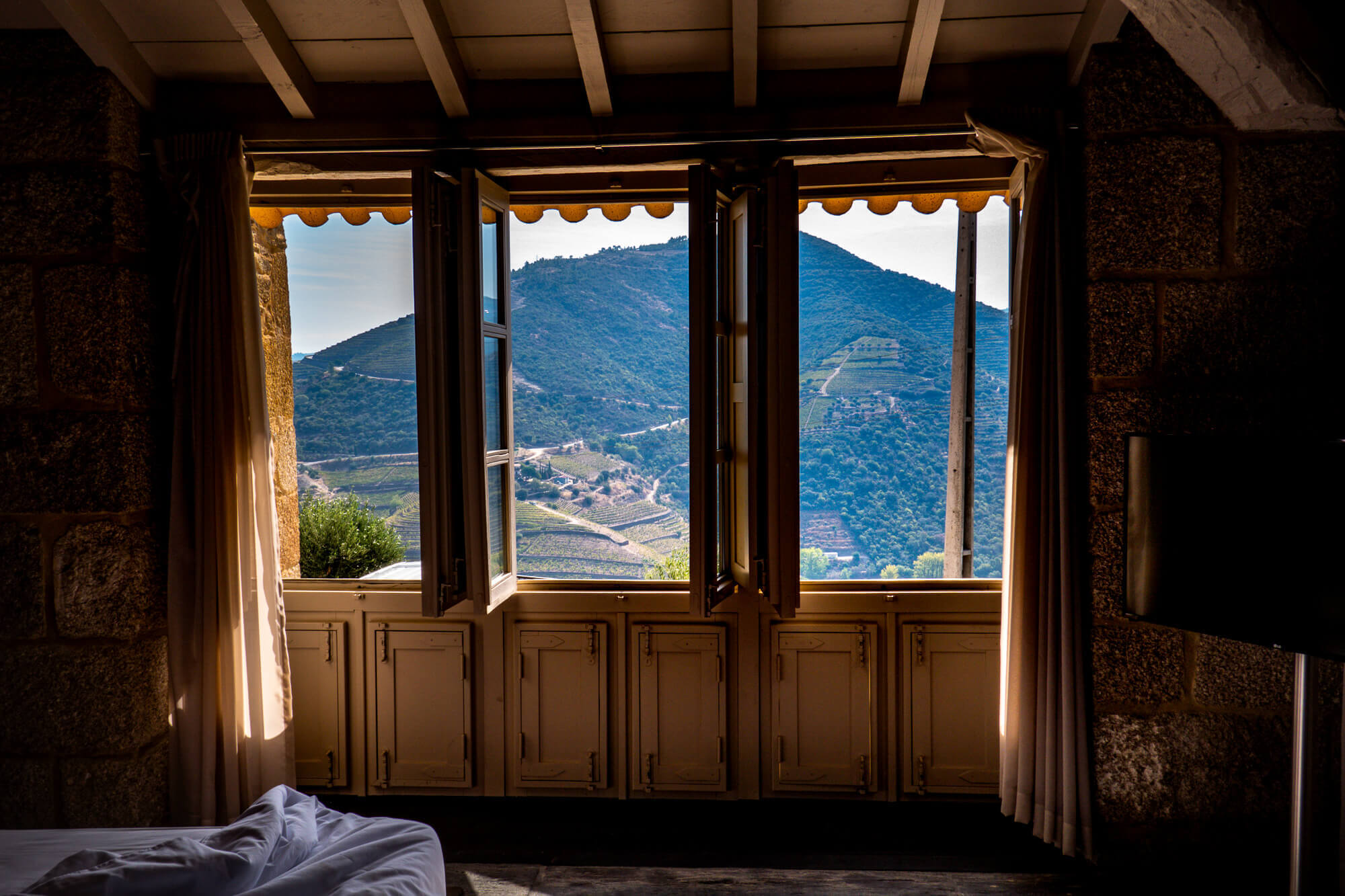 Everywhere you look in the Douro…you look UP. 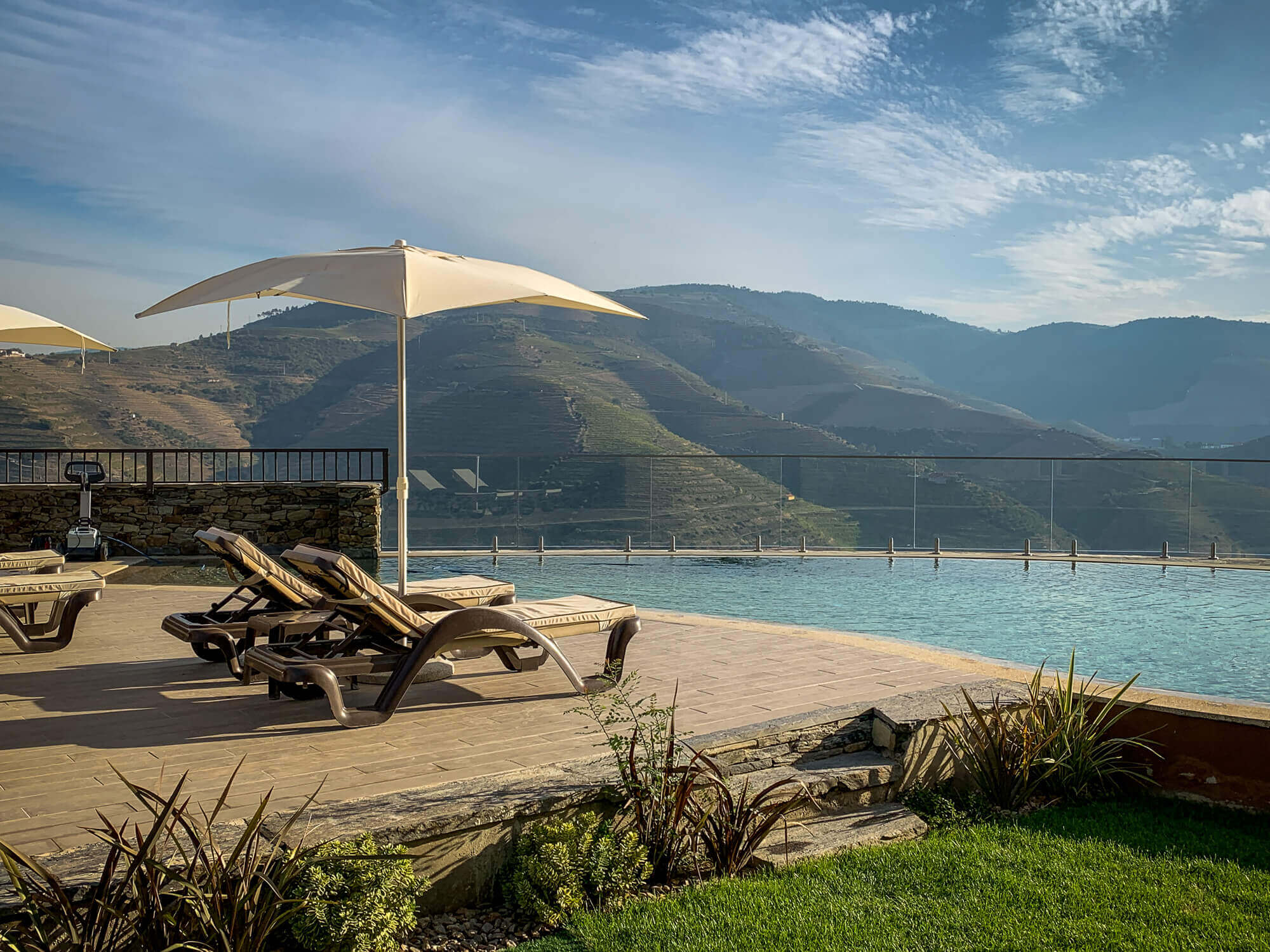 This is where I recovered from my cold. It worked. 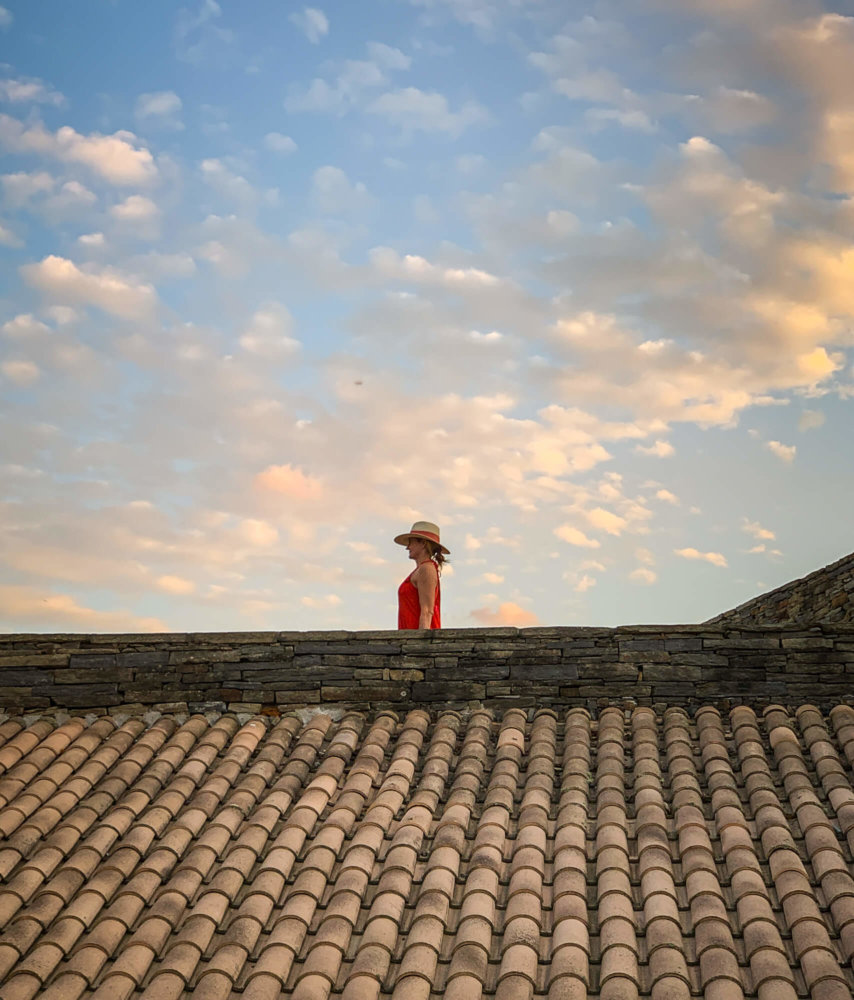 More Information about Vila Galé and the Douro Valley

Here is their website.   And here is Douro Exclusive’s website. Tell them I said Hi.  Here’s a post I originally did on the Douro back in 2015, my first wine tour with Ana and Marco. There really aren’t many reviews of this hotel yet, but here’s a glimpse of Michelin’s website.

Continue reading...
5 Discussions on
“THE PERFECT BASE TO EXPLORE PORTUGAL’S DOURO VALLEY”