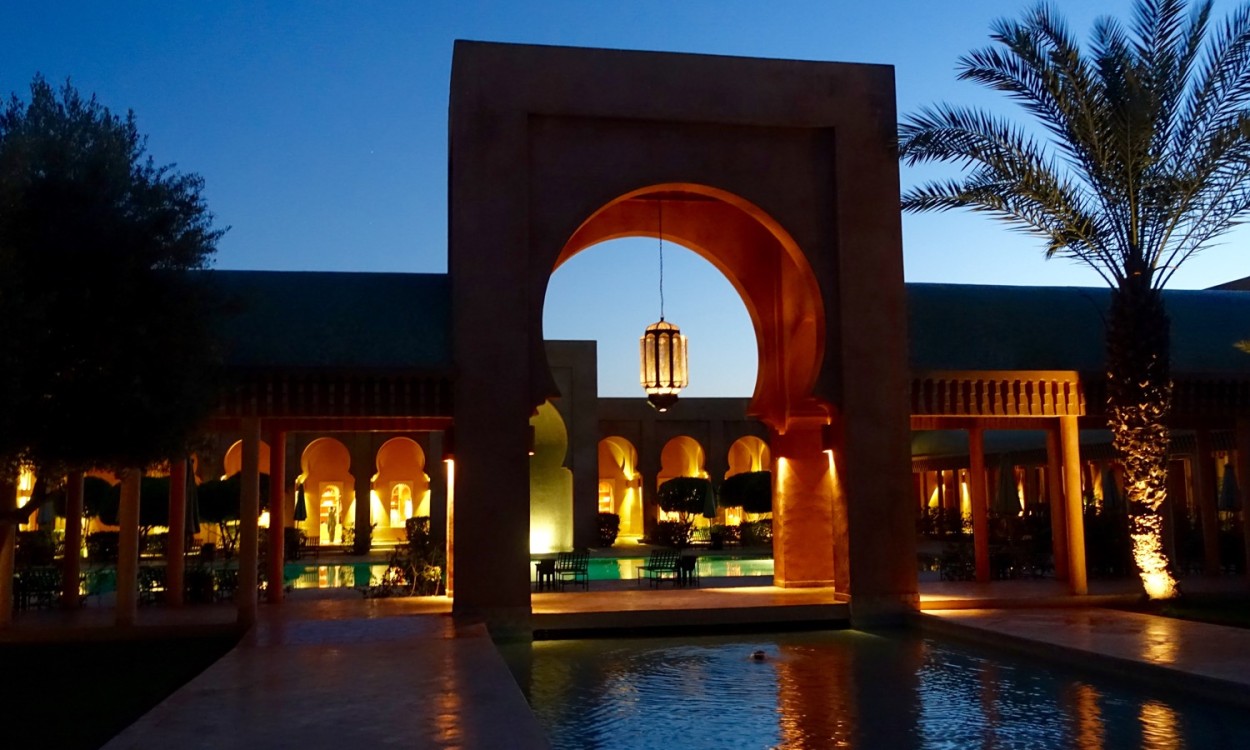 A LUXURIOUS ZEN OASIS OUTSIDE THE MEDINA IN MARRAKESH

[MARRAKESH, MOROCCO] — The sun had set. The sky dimming a deep purple. Reflections on a giant dark pool shimmered back the endless repetitive patterns of grand columns across the water — embracing my pattern-OCD like a bear hug. A handful of people relaxed on pillows strewn about a manicured lawn, sipping cocktails amidst the growing light of the dozens of lanterns lit just so. Silently, five men in long robes and headscarves sat down in low chairs at the water’s edge. And then it started. A gentle bass drum, lithe strings join in, picking up the pace as a percussion resonated against all the giant stone walls surrounding the lagoon. Not loud, on the contrary, it sounded like being in a recording studio, with a growing crescendo of rhythms that seemed woven into the silence of the evening. Almost eerie.  With the rhythms floating across the gentle breeze on what had to be the most perfect temperature of the year. Neither hot, nor cold.

The moon came up, adding its face to the hundreds of lights flickering in the huge lagoon…what seemed like an acre of flat, navy blue blue water. A mirror to the magic that was happening.  This is the Amanjena in Marrakesh. And the peaceful groove is ever present throughout the whole resort. Whether it be the entrancing music, the endless repetition of columns, the vast reflecting pools or the understated calm of the service style that made Aman-style famous around the world. But here, in Marrakesh, it was even more suiting…and all worked together like a finely-tailored suit, every depth of detail noticed the closer you looked.

There are many fine hotels in Marrakesh — one killer one I’ve detailed in posts here — and certainly others even more over-the-top, but this one adds the Aman Touch to the already impeccable Berber hospitably of all of Morocco.  Set outside of the Medina in the Palmeraie and situated around vast catch basins from long ago, the Aman is its own ecosystem. You almost don’t want to leave. Which is why I chose it as my soothing respite after hiking several days hiking the High Atlas, a chance to recharge the batteries and just chill for a couple of days before heading south to the Sahara. I never left.

I brought with me an article I tore out of a design magazine in the 90s, I remember how the look of the place hit me over the head way back then and vowed one day to visit this splendid oasis. At the time, the design was world-leading and still holds up reasonably well. In fact the movie-star glamorous General Manager (equally zen and in flowing linens) said they were about to close to do some more updating. From what I was told by others, at the time it opened, the Medina was a different place than it is today, not as nice and safe, but now where dozens of fine hotels opened within its meandering streets and paths. Back then, this was a retreat from an inhospitable place and it shows. But the Aman style makes this place worthy as a destination alone, let alone being so close to one of the coolest cities in the world.

The zen of the place when I stayed in late April was indeed a great contrast to what I imagine was a boisterous celebration of celebrity the week before (when I had originally tried to book) when David Beckham bought out the whole place for his 40th birthday  and stars like Tom Cruise, Nicolas Cage, Gordon Ramsey and others all camped out amidst the soaring columns. Glad I came this week.

The reflecting pools are the soul of Amanjena and they are everywhere and everything.

Dinner is served outside, under the stars and gentle breezes. Like all of Moroccos, it is lit with candles like in a movie. Only this one, a better movie.

Just hard to walk around without stopping in awe.

The hush of the place is deafening. Never did I hear a loud noise, a cart banging or a voice raised above a close whisper.

The Pavilion rooms are a cool setup, each like their own villas. With a huge outdoor seating area, fountain and open-air sliding doors. The inside and outside are one.

The Pavilion rooms are a cool setup, each like their own villas. With a huge outdoor seating area, fountain and open-air sliding doors. The inside and outside are one. This is a ROOM!

Inside is outside, outside is in.