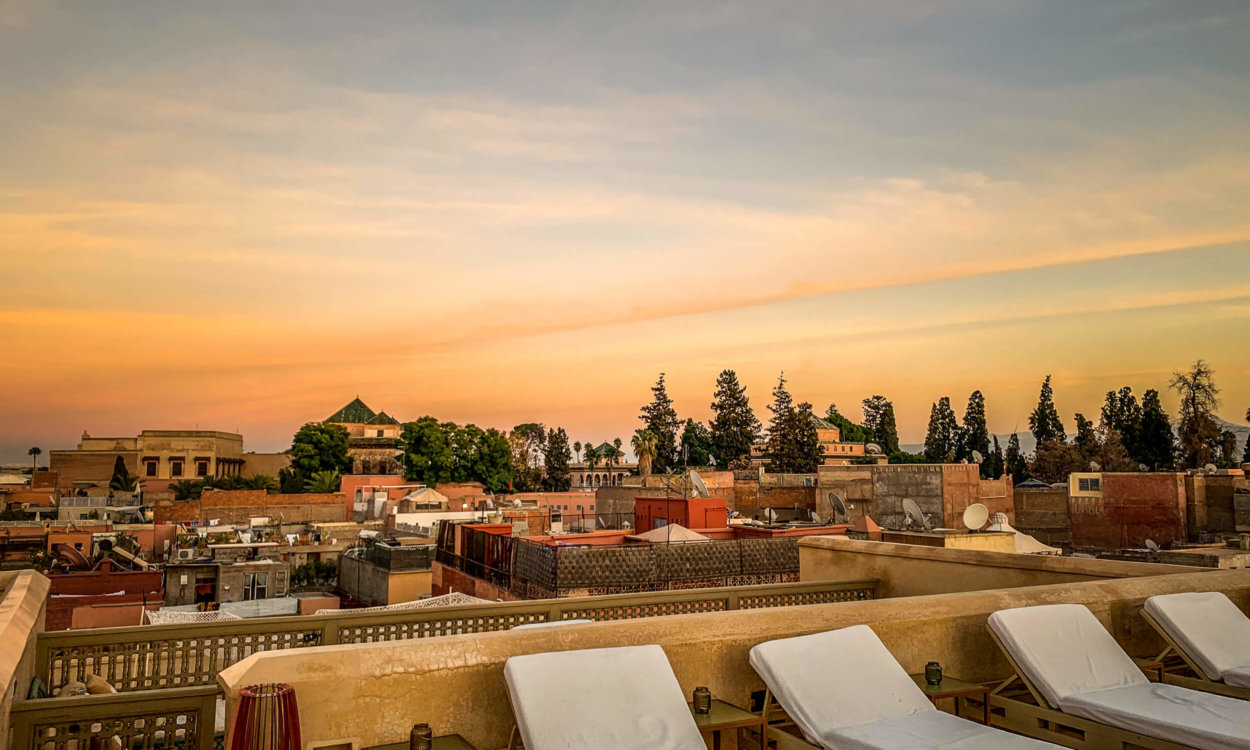 STAY IN A QUIET RIAD IN MARRAKESH’S BUSY MEDINA

[MARRAKESH] — Arriving at Marrakesh airport was a trip.

My hotel had arranged a Fast Track service to expedite thru the passport control. A cute, small red-lipped French-speaking girl in a matching red blazer welcomed me immediately off the jetway with a sign.  It was the first time I’d seen my name as a verb — “Fogarting”.

We stood awkwardly as we waited for my baggage, toes tapping, me trying my Bad French. She, apologizing for her delightful English: “I like this, I can practice my English….” acknowledging that my jet my high school French was worthless.

After collecting my bags, she whisked me past another queue, then another, and then to yet another man outside the door with a “72 Riad” sign. He, in turn, shuffled me to an SUV that had just pulled up to a halt, the door swinging open before it stopped as I jumped inside. We wove thru the crazy Marrakesh traffic through the thick protective walls of the Medina, past donkey carts, smoking buses and pedestrians risking their life crossing the maddening streets, the surround sound of the midday Call to Prayer filling every corner of the van.

The driver pulled up to a busy little square next to the Royal Palace, seldom visited by royalty, with armed guards of every military in dress uniform at the gates, staring at me as I de-carred. The back door opened up and another man grabbed my bag, dumped it quickly in a cart, “Bonjour Monsieur Dan, follow me” as he took off down the crowded streets of the souk, dodging scared cats and old women in full dress, hawkers selling nuts and yarn and dead chickens, asshole young men on belching scooters screaming past, diving headlong into the crowded alley at full speed, incredulously not mowing down everyone in their sight.

Never had heard of Riad 72 before but had seen it on Speck on the Globe’s great Instagram page. When I saw it on Tablet Hotels, I knew it had to be good.

Tucked away on a quiet dead end of the Medina, down where the streets get narrower and narrower until they stop at a wall. 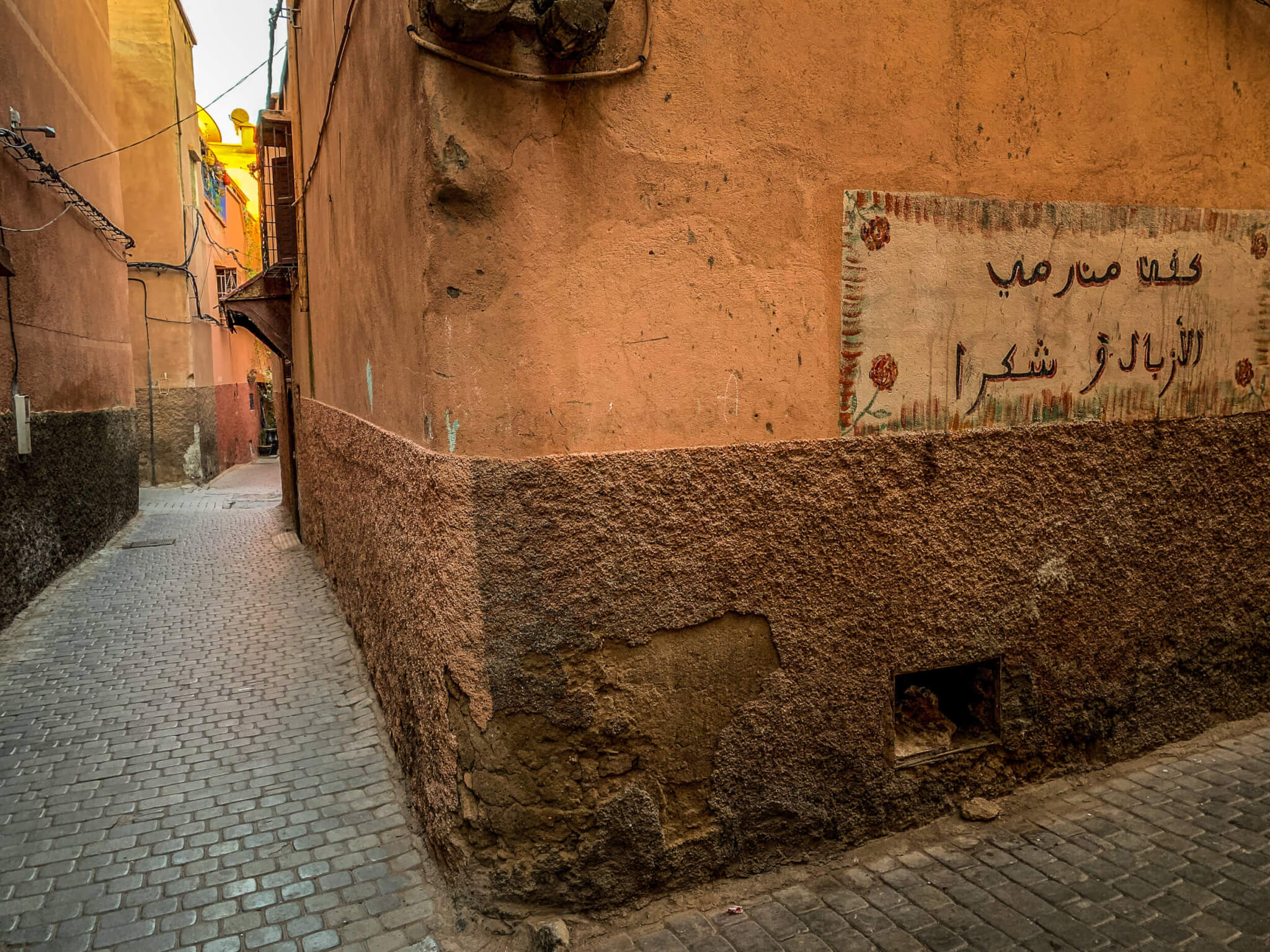 Like a lot of riads and casbahs, the entrance are dark and cool. 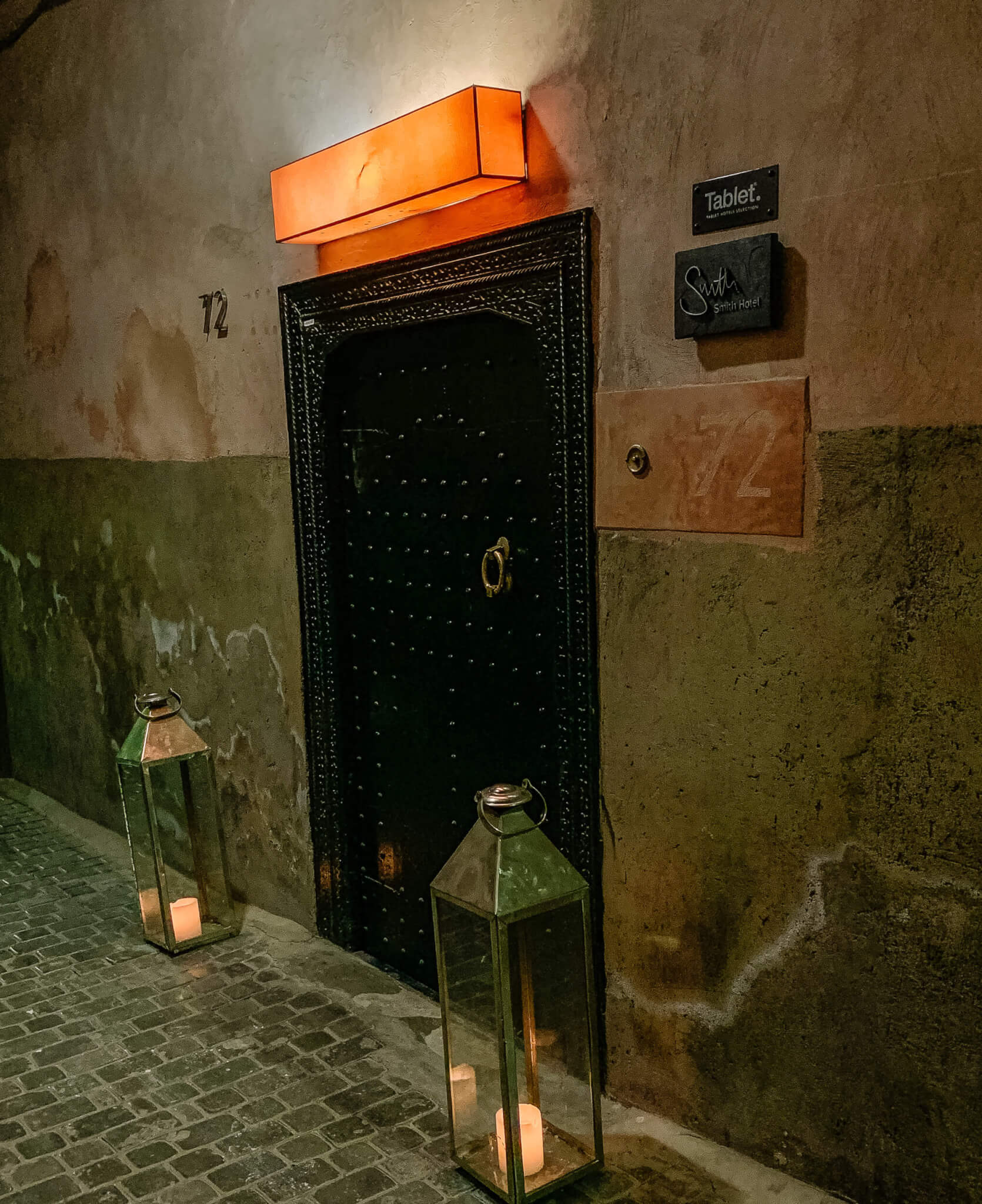 The porter rings the bell on the ancient riveted door. It creaks open and, as is often the case in old riads and kasbahs, there’s a dark narrow corridor that winds you around until it opens up to a vast open courtyard. Like the Propylaea at the Acropolis, limiting your gaze before a great reveal. We walk through the dark corridors, turn the corner and the bright room opens up to a three story atrium, palms reaching for the hole in the sky. 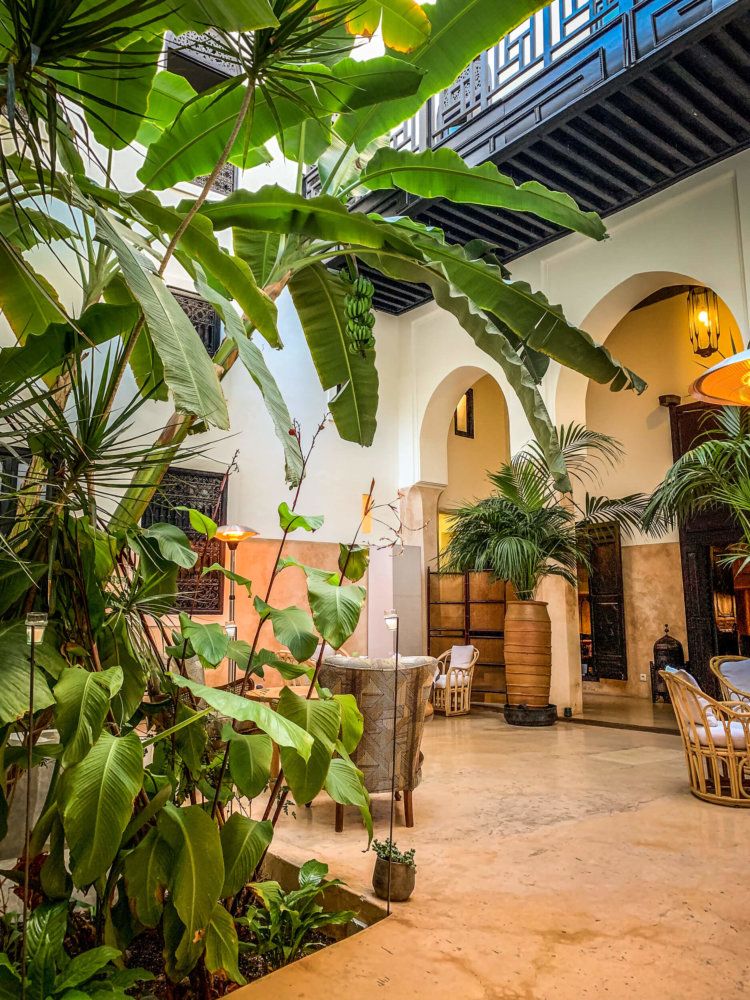 Immediately they are there to greet you, four of them. “Bonjour, Monsieur Dan.”  A smiling woman motions me to sit, then puts a great brass pan on my lap, as per a Berber welcome, pours cool water over my hands then hands me a chilled white towel. “Welcome.” Another man was waiting behind her, “Mint tea?”  “Oui, bien sur.” He does a tall pour from his hip to shoulders, creating frothy bubbles in my tiny glass below.

Riad 72 is ranked as one the best boutique hotels in Marrakesh.

Riad 72 is run perfectly by the delightful Stefania, a transfer from Milano I’ve read, who welcomes you like it’s her home. Laying out advice, gives directions and provides about as great an overview of a Marrakesh map as you’d want. “Theeas road, okaya, it’sa lineda with many electricitta shops so not so pretty, but think of it like a highwaya. Not pretty, butta it gets you there quickly…”  she said in that wonderful way that Italians force a vowel at the end of every word. 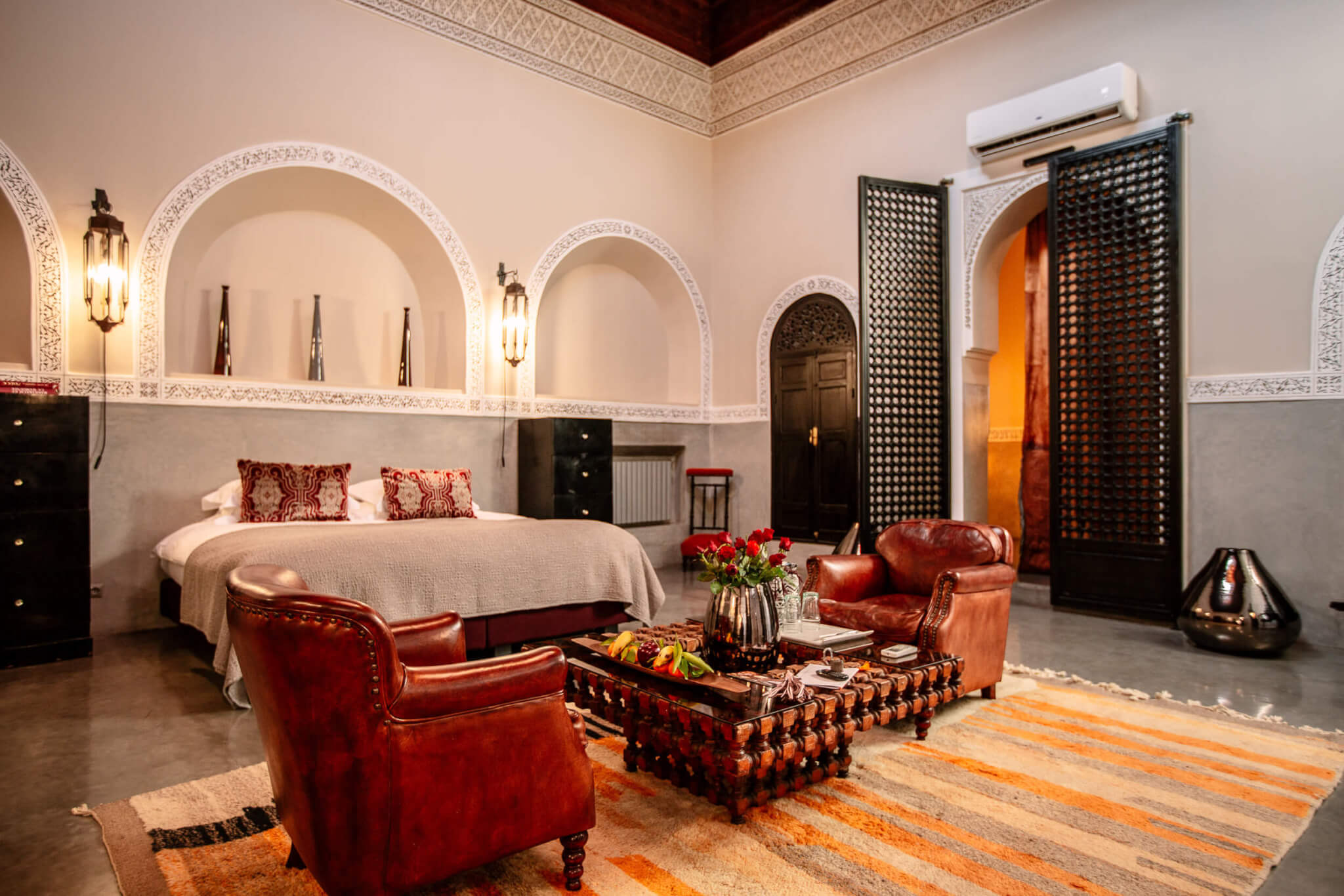 Stefania gave us a fabulous, giant suite on the top floor, big enough for a caravan, like all rooms it opens up to the road courtyard. 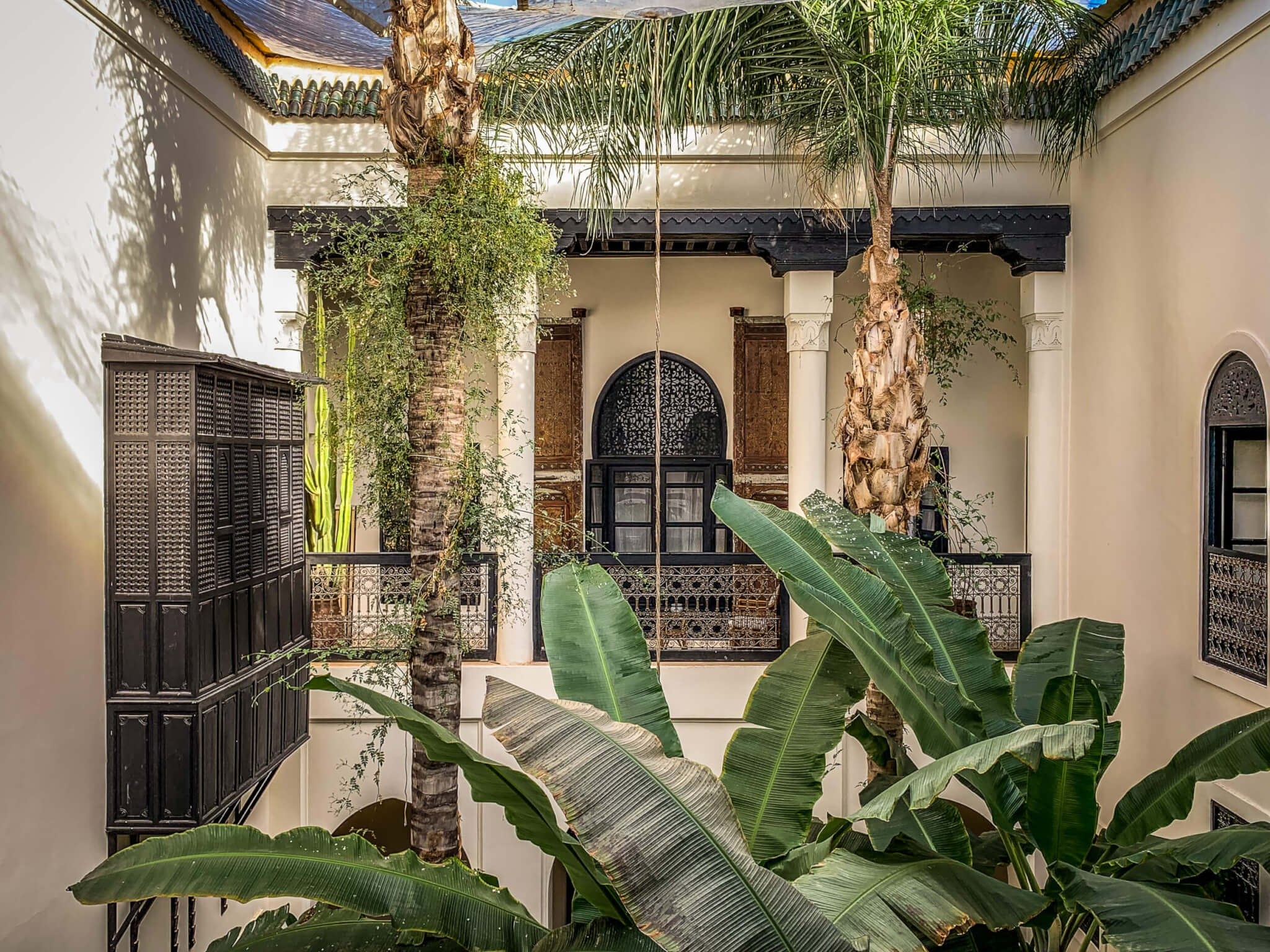 The view from my room.

This riad is just a prefect place, reasonably priced, giant rooms, with a great restaurant, and one of the highest rooftops in Marrakesh.

Here, watch this short video and you’ll see what I mean:

Like all riads, the rooms are built around a quiet inner courtyard, you can’t believe you’re in the middle of the crazy Medina. But inside, it’s quiet and cool. The sound of a trickling waterfall providing all the white noise you need for a nap. There’s an older section and a brand new one that looks old (forgot to take pictures of that) linked to the main house with a connecting hallway.

A riad is a type of traditional Moroccan house or palace with an interior garden or courtyard. Many of them have been converted into small hotels like this, all across the Medina.

The Rooftop Terrace at Riad 72 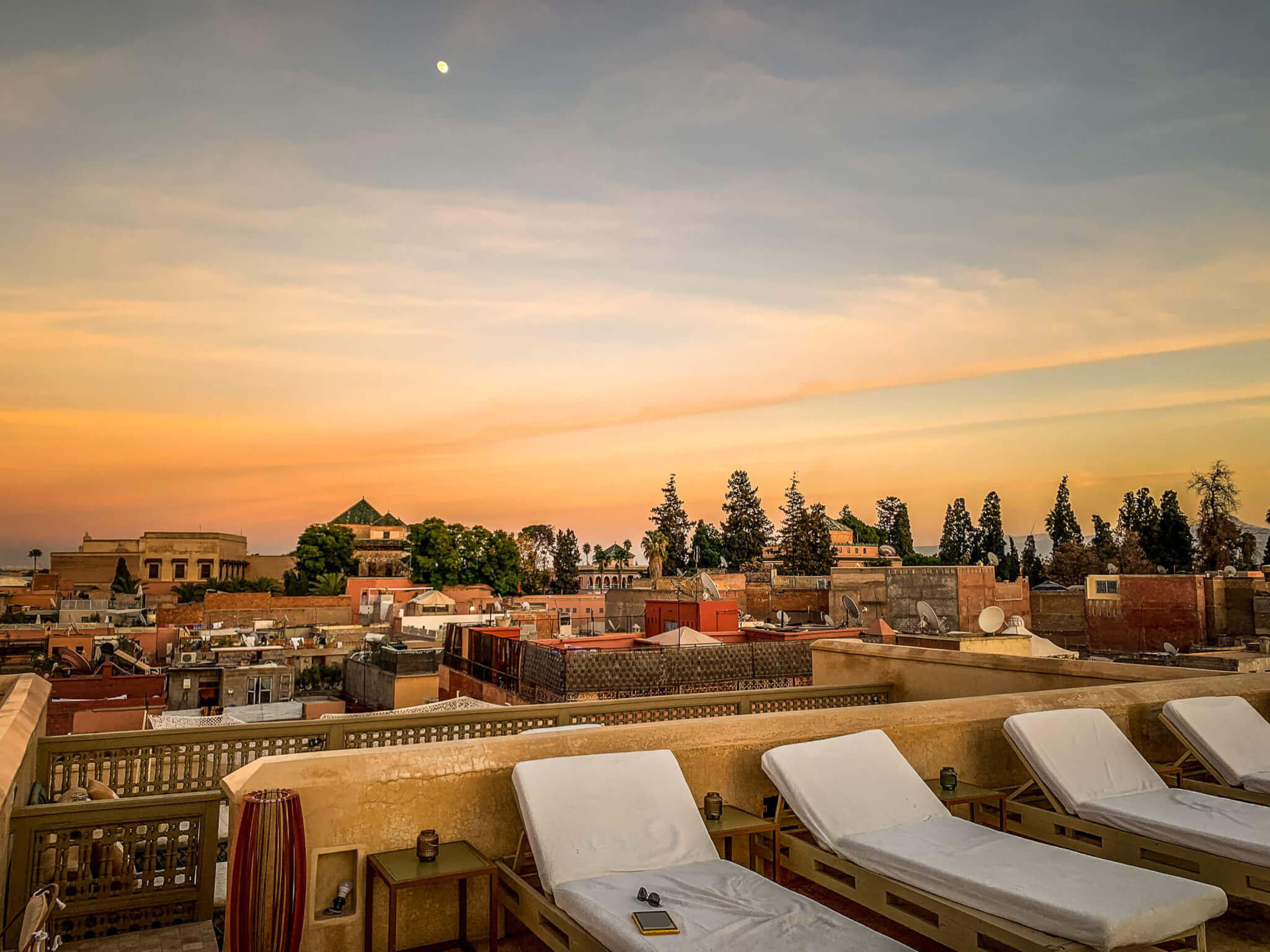 Does it get any better? Definitely plan to come up here for a sunset cocktail every night.

Riad 72 has one of the highest rooftops in the Media. That’s the Royal Palace in those trees over there. The original owner was friends with the king so he could have his riad one story higher than everyone else.  They have loungers for the sun, evening cocktails to watch the sunset or you can have breakfast amidst the darting birds.

Every direction is loaded with views.

Always blows me away how close the Atlas Mountains are to Marrakesh.

Amazing that that mosque tower was built in the 10th century.

That’s the royal palace amidst all the trees. 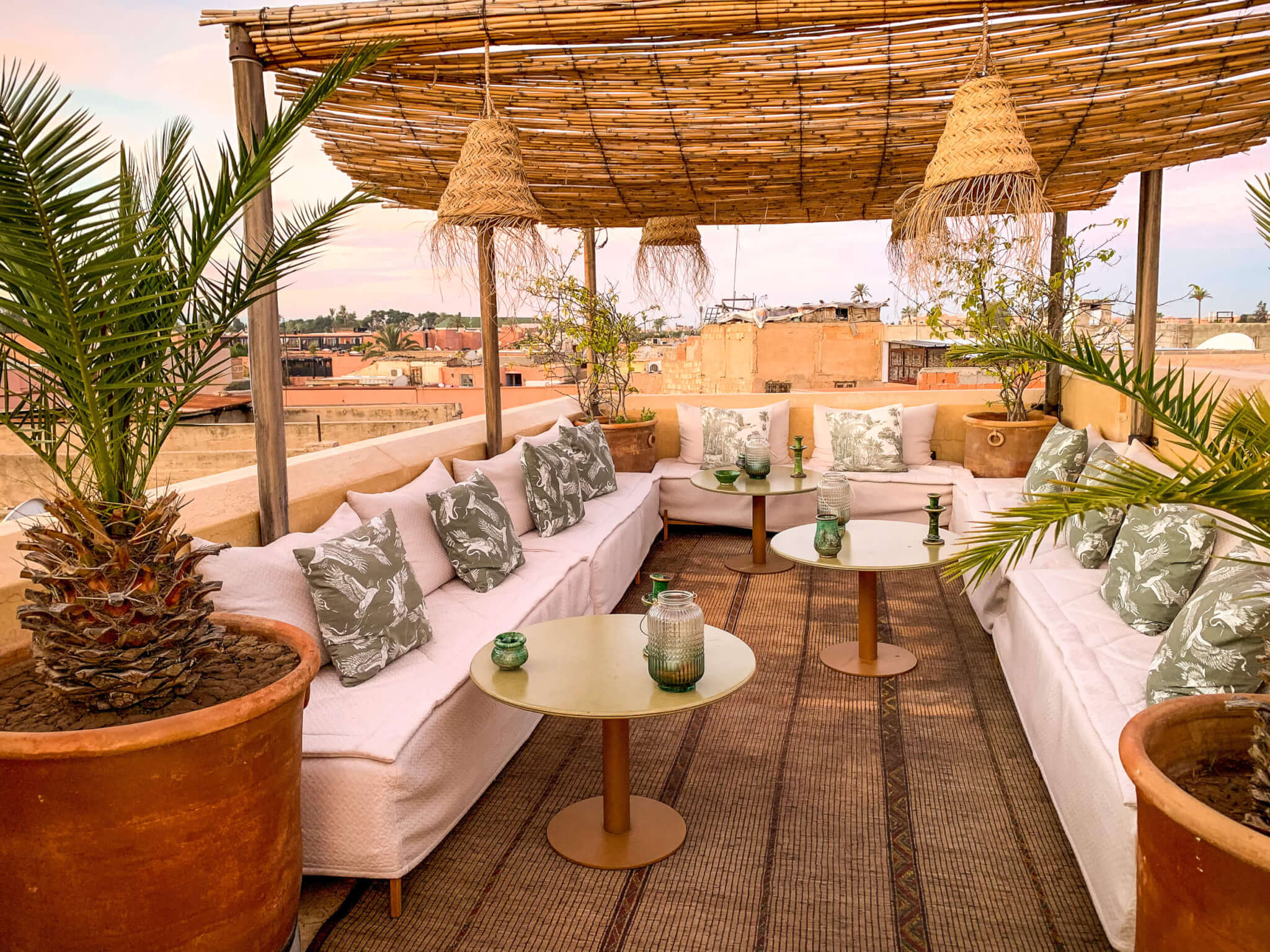 The perfect place for a cocktail. With flocks of songbirds darting across the rooftops, the sun turning everything orange. The Call to Prayer filling the darkening peach sky.

The Grand Suite at Riad 72 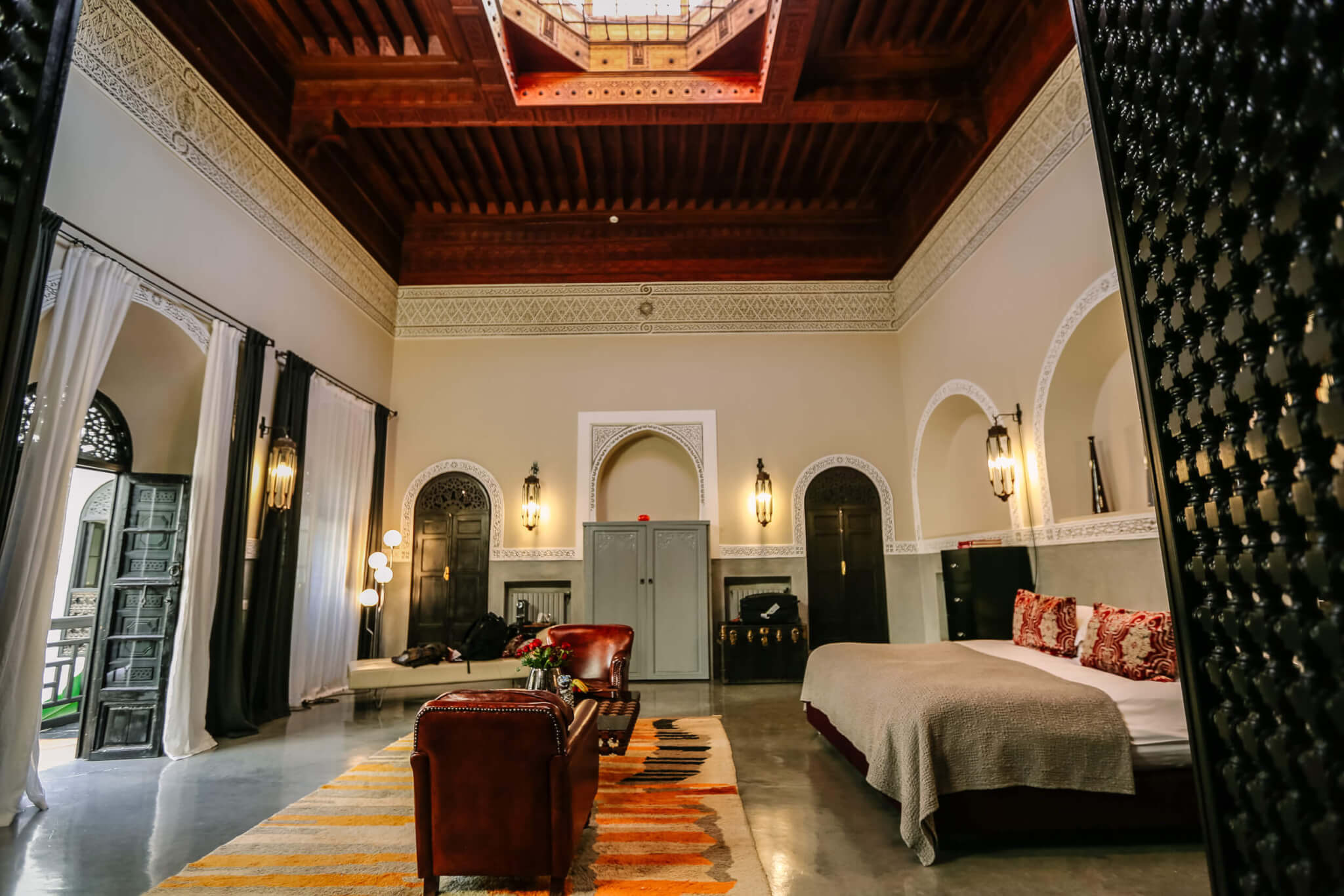 This is one of the biggest rooms I’ve ever had. The Grand Suite. I booked this trip the last minute, so this was the only room available. But it was still only a few hundred dollars a night for this gigantic space. 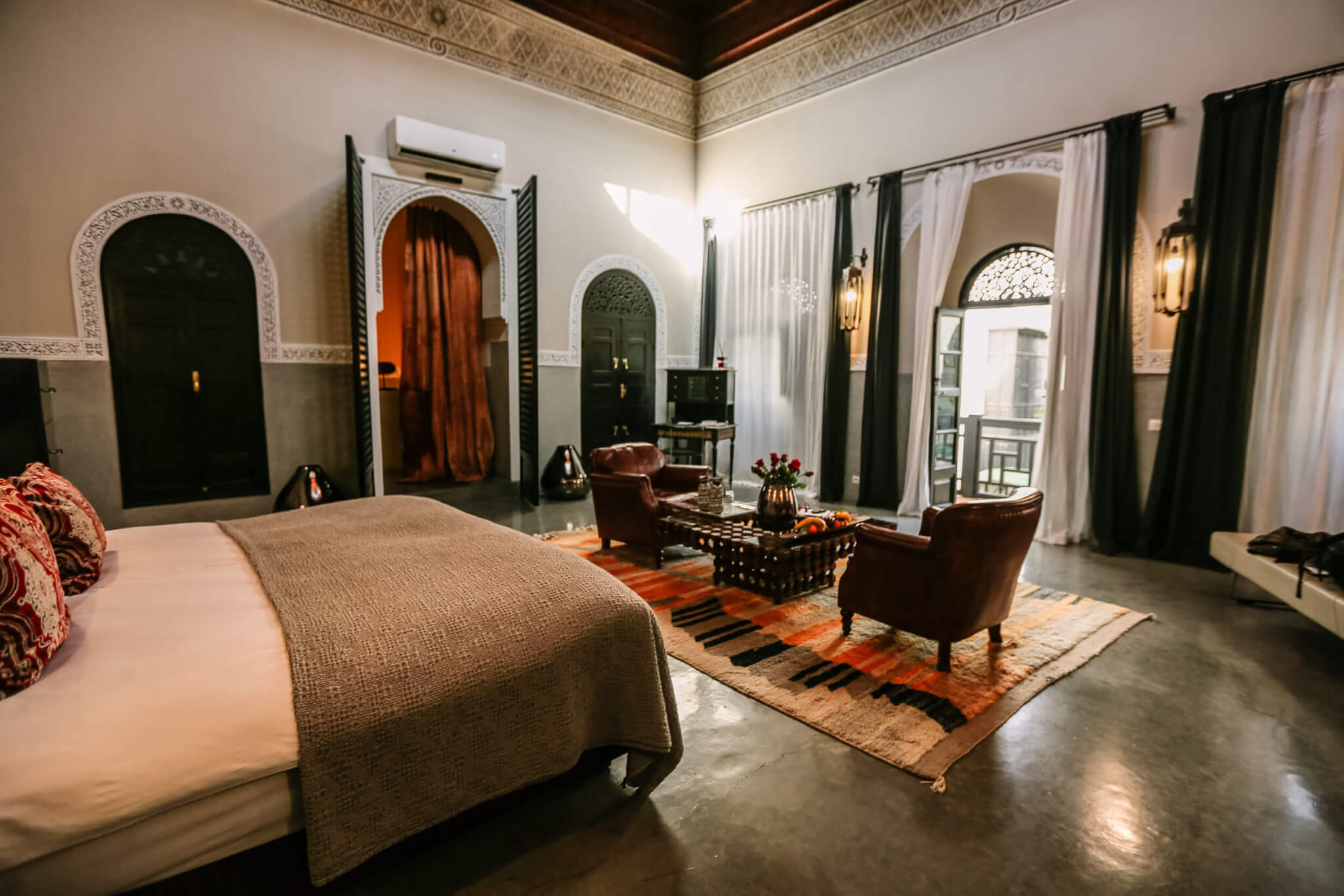 The centerpiece of the whole suite is the stunning cupola that lets gentle light flow into the room.

They are so thoughtful, they get up on the roof every night and cover it with a big black out blanket. Then pull it off again in the morning.

The suite opens up onto the atrium — there really aren’t any windows, just shutters, so there’s a gentle sound that dapples throughout the day.

The details are just stunning, no matter where you look.

I fell in love with the luscious leather drape that leads into the bathroom.

The bathroom is as big as my condo, with that perfect burnished concrete floor.

We jokingly called this the Washing Station.

Moroccans know how to light everything so well, even bathrooms.

The Restaurant at Riad 72 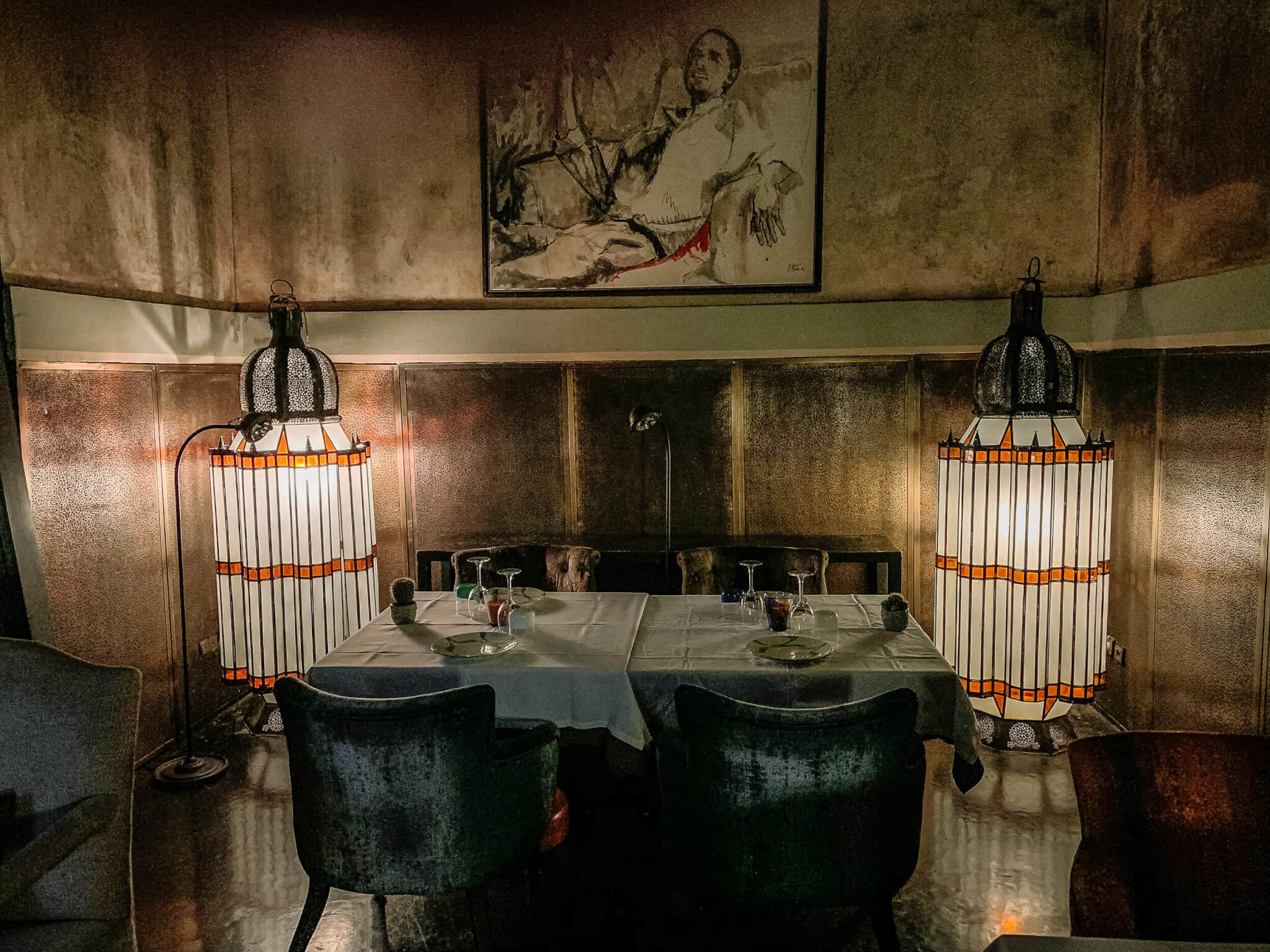 The restaurant in the hotel is not just for guests, it’s so good people come from all over the city to eat here. I have no idea how they’d find the place.

In Morocco, everything looks different at night.

How perfect is this?

Breakfast is the best, with healthy meals, a hot noss-noss coffee and fresh squeezed orange juice.

Other Information on Hotels in Marrakesh

Here is a GREAT article from SUITCASE on affordable chic hotels in Marrakesh. Riad 72 is one of them!

Here’s Riad 72’s website. Here’s a listing for Riad 72 on Tablet Hotels.  And in Mr & Mrs Smith. And a rare five star review on TripAdvisor. A fantastic review in The Telegraph, including pics of the same room I stayed in. On Jetsetter. And a great overview of Riad 72 on Secret Places. And a great article in The Evening Standard that calls Riad 72 “one of dreamiest riads in Marrakesh.”  And another Telegraph article that call Riad 72 “one of the top ten boutique hotels in Marrakesh.”

Here are two other great places to stay in Marrakesh, both outstanding, but also 2-3x the price of Riad 72… which is why this is such a great find. Here’ the stunning mint-condition Villa des Orangers. And if you’re an Aman fan, when I saw pictures of Amanjena when it opened 20 years ago, I thought “I have to go here.” Check it out.

Continue reading...
1 Discussion on “STAY IN A QUIET RIAD IN MARRAKESH’S BUSY MEDINA”