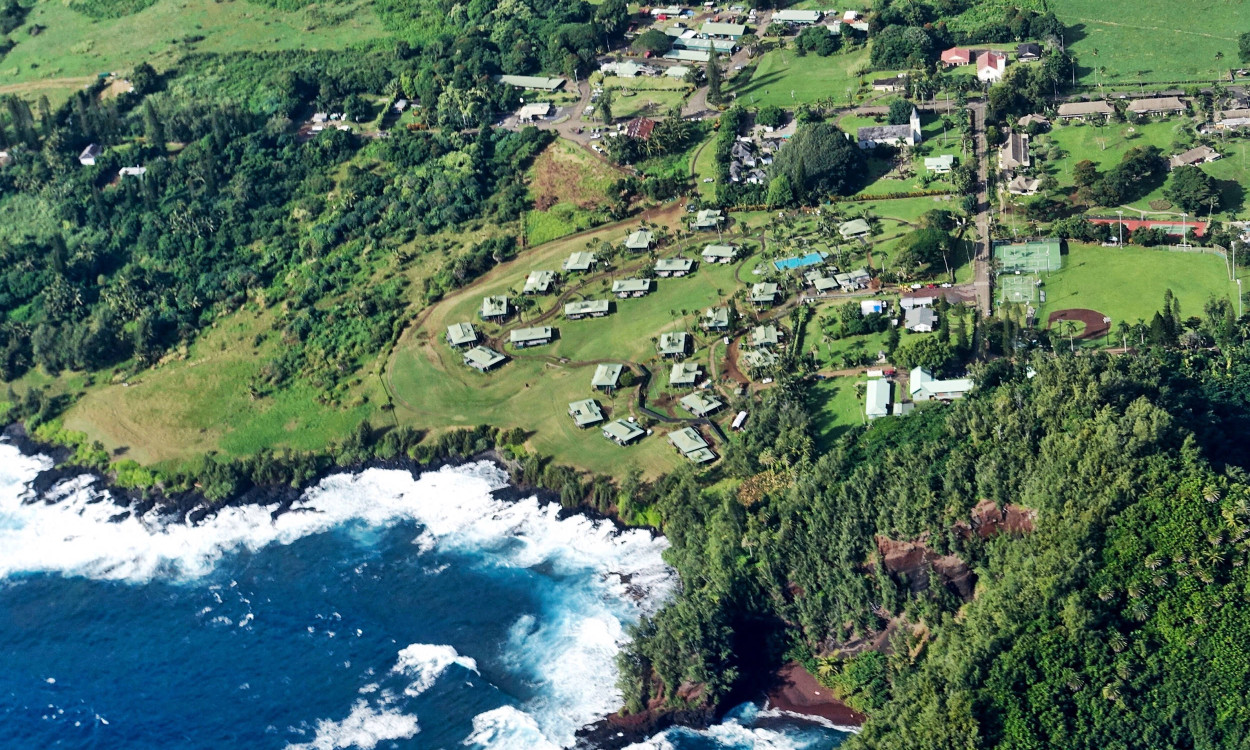 A QUIET PARADISE AT THE END OF THE ROAD TO HANA

[HANA, MAUI] — I was in Maui in 2015, the week before Thanksgiving scoping out a new project and got a chance to stay at the cool Travaasa experiential resort on the totally chill side of the island, at the receiving end of the Road to Hana.

A lot of people take the white-knuckle drive, turn around and drive back the same day.

But Hana is a world away from the Resort Crazy, white sock/white sneakers and muscle shirts (when did those come back in style? And why?) at the other end of the island.

This is the way to do it. I love me some nice hotels and seek them out all over, but few can compare with the views of these bungalows, smack overlooking the angry waves crushing against the black lava shore.

I was right on the water and slept with the doors wide open each night, listening to the roooaaaarrrr.

A lot of people take the white-knuckle drive, turn around and drive back the same day. But Hana is a world away from the Resort Crazy, white sock/white sneakers and muscle shirts (when did those come back in style? And why?) at the other end of the island. This is the way to do it. I love me some nice hotels and seek them out all over, but few can compare with the views of these bungalows, smack overlooking the angry waves crushing against the black lava shore. I was right on the water and slept with the doors wide open each night, listening to the roooaaaarrrr.

A good position to be in.

I just loovvve sitting in water, looking at water…

Now this is a tree. Look at those wee little people learning Hawaiian throw net fishing under its gigantor limbs. You could fit an entire hour-late gate at Laguardia under that thing. I was hustling back to my room trying to beat an afternoon rain storm and this beast stopped me dead in my tracks. What’s the rush? I ended up soaked to the gills, just sitting there in awe, watching it bow in the breeze, laughing off the storm like it was nothing. As it has done for a hundred years. I felt so small, a tiny leaf hanging on to this great world.

Doesn’t get much better than this..

Wave machine. To help you sleep better. Seriously, I was standing out there in my boxers… because the bungalows at Travaasa are so private, you can stand out there in your boxers… shooting this. This is how close you are to the angry and relentless waves. All night long. Sleep like a baby.

Travaasa has a cool private little beach club on Hamoa Beach just down the road. Hardly anyone there … You just have to sit there and stare at those really gross hues of blue and green next to jet black lava rock… Yuck. So uuuggly… Everyone should just stay home. You won’t like it… #youshouldnotgohere. 🚧🚧🚧🚧🚧.

This place looks like an American Express ad. Hamoa Beach. Hana. I’d like the thank the Prop Department for planting those cool trees way in the back..

Oh maaan, something must be wrong with my Instagram. All these beaches are black! … Blue water looks right, though. Green trees, too. Can’t figure out what’s going on… They mentioned something about a volcano. I wonder if that messes with The Instagram? Test. Test. Test. Anyone else having this problem? How’s it look on your screen? Those people seem like they don’t mind the black sand, though. Even happy. Maybe it’s just my screen. Ohhhh I give up…

I never like to go the same way twice. When you’re leaving Hana, you can doubleback and swim like a salmon against the traffic or continue on around the other side of the island. The car rental companies throw a bunch of ☠☠☠ at you on their maps and it’s dicey in parts, often barely one lane, sometimes washed out, but if you’re adventurous and have a jeep, it’s worth every white knuckle you’ll earn along the way. Truly stunning scenery the whole way, like driving a Mars Rover across vast lava fields.

“I feel the earth move, under my feet….”

“A lot of people take the white-knuckle drive, turn around and drive back the same day. Forget that, stay here.”

The Road to Hana is arduous, traffic can be thick on the thin road that bobs and weaves along the coast, often in single lane. A lot of people leave first thing in the morning, then it is rush hour at the end of the day coming back.  Since you’re staying out in Hana, skip the traffic and take the road mid-day, or even after 3pm.  You might still hit traffic coming back, but at least less in front of you.  What’s great about Travaasa is they have their own airline, so you can skip the whole long drive and fly over it instead, laughing at the waves and the traffic from the window of the small plane.

Hana is on the rainy side of the island, so be prepared for that. Sometimes just a spritz, sometimes a torrential downpour.  “There’s no bad weather, only proper clothing.”  Good time to plan for the spa or yoga. Or nap with the sound of the rain and waves.  Here’s a great recap of my stay that Travaasa put together from my Instagram posts. I’m honored. Here’s their website. A mention in the NYTimes about the flight, a great overview from the LA Times, a winner in Conde Nast Traveler.

The resort has been around forever, in various forms, but new owners took over the place about two years ago and have been really upgrading everything, including the rooms, the restaurants and all the cool experiential activities. So if you read reviews before November 2015, when they were just finishing up the renovations, they’re probably during that awkward growing-into-their-teenage face stage. The room I stayed in was just perfect. Not very fancy, but clean, new, and right on the water.  You can see all about a glider flight I took over the towering volcano nearby in my other post.

This is the one you want. The bungalow next to mine and thatmuchcloser to the crashing, angry waves. Bungalow 217, write that down… Just look at that view…. Wow. I bet that constant roar must be like living next to the 405. Naaaaw, different.

Clean nice, not my favorite. But spotless, with windows that open right out onto the sea.

I never closed the doors during my whole stay. The angry surf crashing all night and day. No need for an alarm clock, you’ll get a full-on sunrise every morning.

Highly recommend you stay in the bungalow section. You can see it on the map and on the cover photo.

The restaurant is nice and their new chef is awesome.

It opens out over Hana and the nearby beaches…

The yoga/exercise room was one my favorite pasts. You can start out the day right, right here, overlooking the pool, the sunrise and the ocean and mean surf. All with the doors wide open.
0