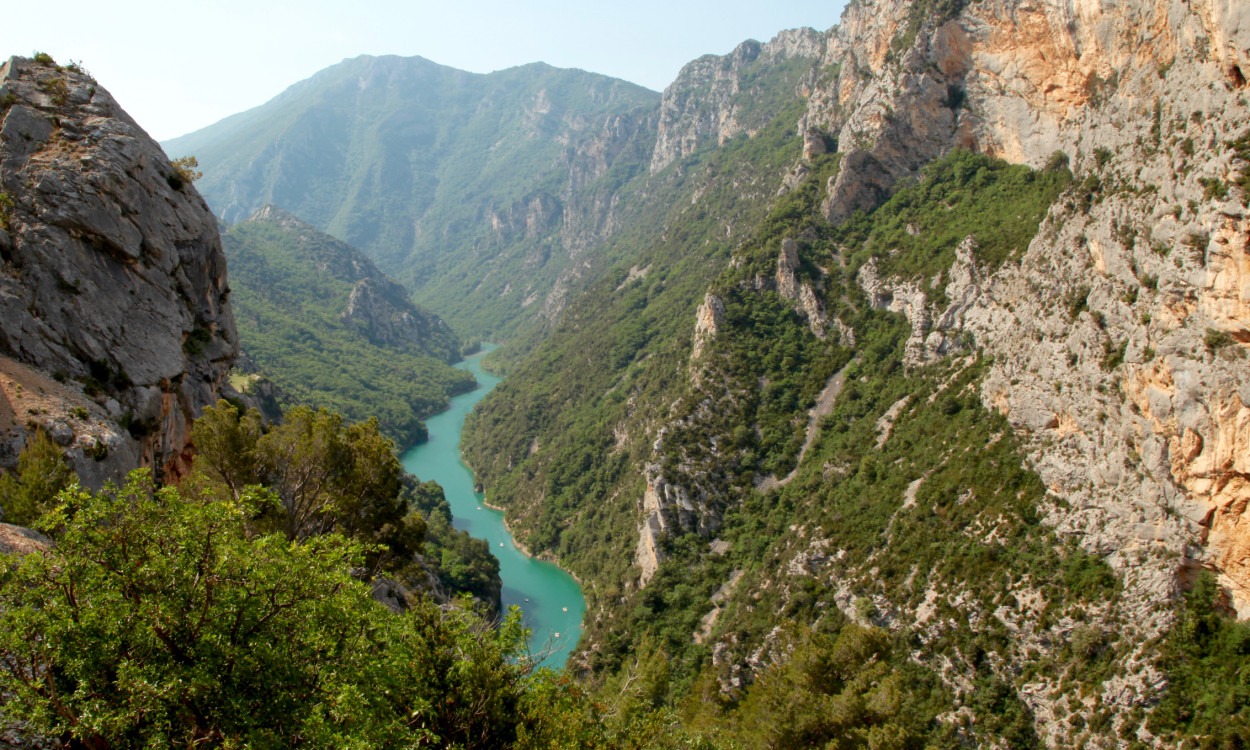 [GORGE DU VERDON, FRANCE] — All along the skinny serpentine road that follows each side of the Gorge due Verdon canyon rim are cool slot canyons to explore.

Canyons like this awesome hike below the jaw dropping Point Sublime. 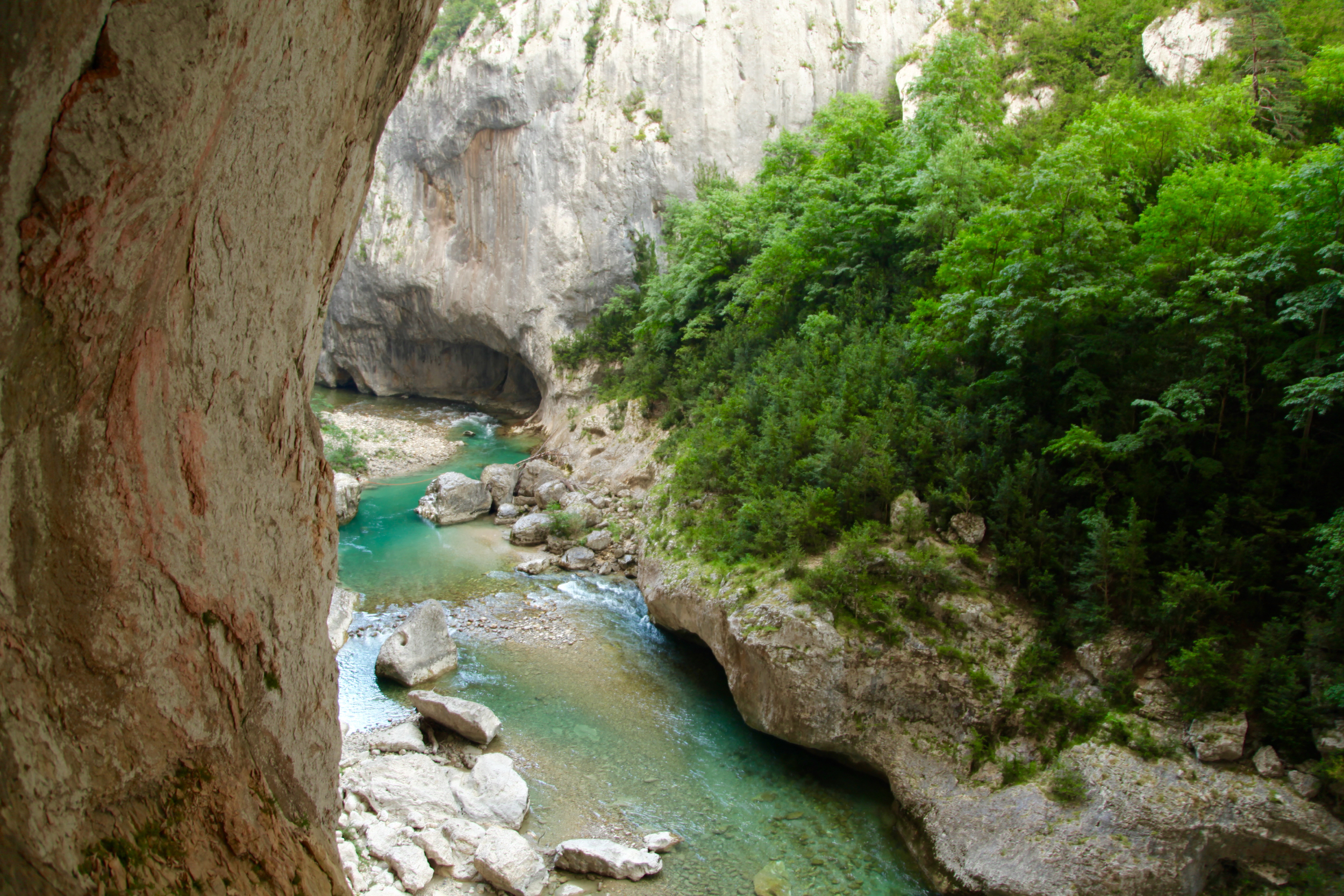 I wasn’t planning on this hike. Just stumbled on it and kept going. The path descends to follow along the water, climbing up ladders and disappearing into cool dark tunnels, emerging on the other side. When I say tunnels, I mean pitch black tunnels.

“Signs warn you should have a headlamp. “Hahaha, we don’t need no stinking torchiers.” I mumbled to myself as I entered that last and longest tunnel.”

Okay, click this video, turn your sound up and then start reading:

Well, they were serious. Unbeknownst to me, that tunnel is about a half mile long, in pitch black. So hundreds of feet in, the few other hikers disappear, so does any faint light at all. Total blackness.

Me, not knowing if I was walking into a pit or wall. Clicking like a bat to bounce sounds against the invisible walls to find my way.

I may or may not have been in there a very long time.😬  I could just see the NYPost headline: “Ignorant tourist found dead in tunnel. Body may have been there three weeks, steps from other hikers.”

I pulled out my cellphone, the battery near empty, natch. Using a burst of dim light every few metres, slowly walking toe to toe and feeling my way the along walls, heaving a big sigh when a beam from other well-prepared hikers appeared from the distance… trying to act cool as the baffled other hikers pass this tall dark shadow emerging from the blankness. “Bonjour! Errr, soir!” (Never get that right)

Finally, after seemingly eons, a faint light appears. The end of the tunnel. Other people! Thank god. And then🌩⚡️💥. A torrential thunderstorm. Listen for it.

This was a Noah-level downpour, lightening all around. Buckets of rain. Of course I wasn’t prepared for that either, not even planning on this spontaneous hike. No poncho. No backpack. No water. No food. Exposed to the elements; like swimming standing up, soaked through my boxers; frying my expensive camera to its core.

And then it dawned on me, to race back to the car I had to return the the same dark way.

Totally baffles me I’m not dead yet.

This is France?!?  The great Gorge du Verdon. The Grand Canyon of France. And an Adventureland of fun, with trekking, boating, canyoning, climbing and just plain gawking at all the natural beauty.

I’ve wanted to come here since my high school French class. I’d like to show you why you should come here, too.

About an hour and a half from the French Riviera and Provence, the Gorge du Verdon is a great maw in the earth that goes for miles. 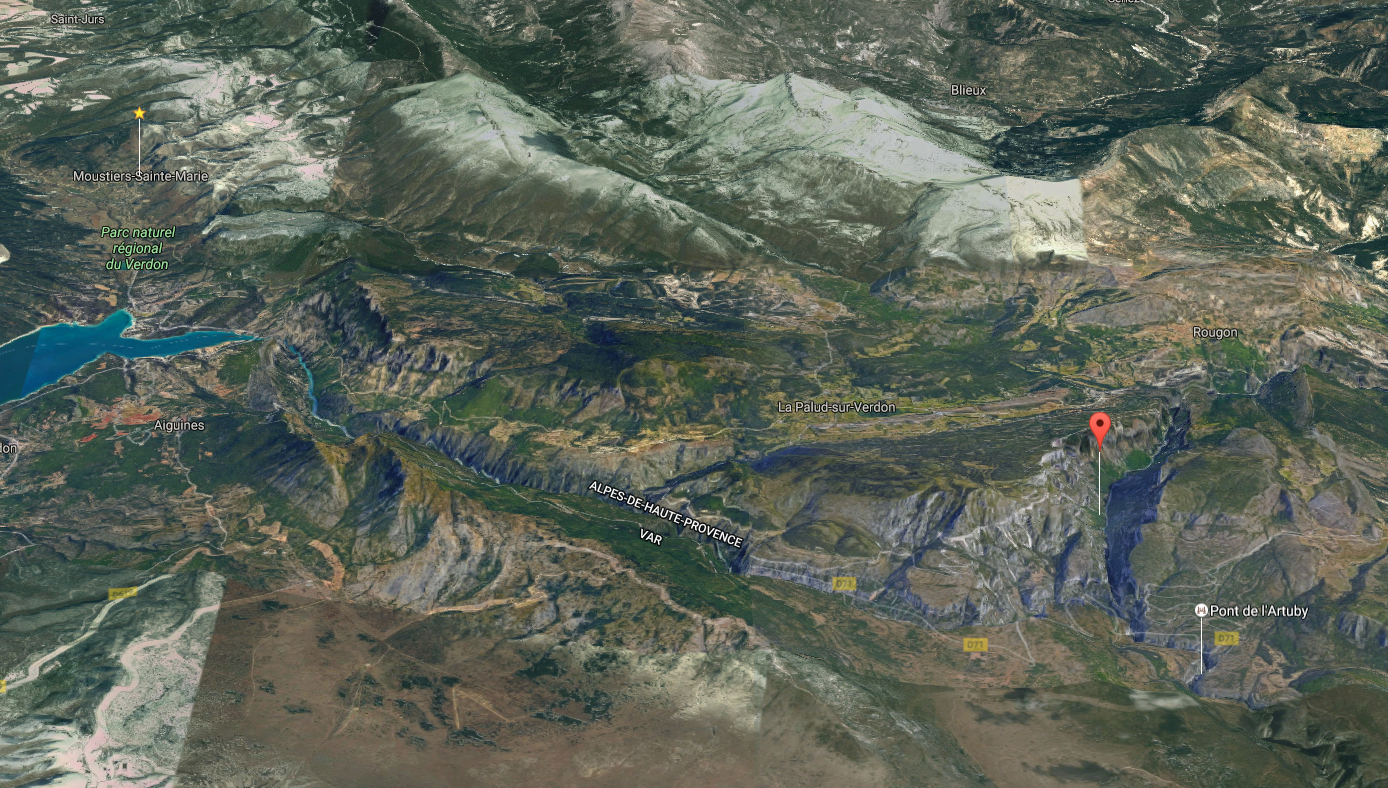 You think of Provence as this great mellow land of beautiful fields and lavender…but not this great maw in the earth. 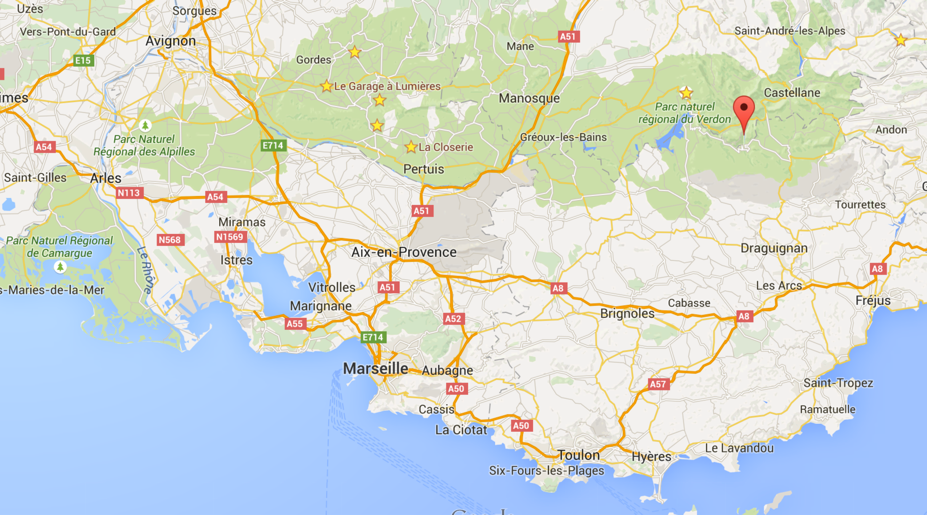 Most people just go to the Cote d’Azur or Provence and never venture beyond that. This is so close to everything. Definitely make a detour up to the upper righthand corner of Provence. Just about and an hour to hour half away.

Drive the even twistier and narrower Route du Crêtes (Route of the Ridges) and let it all hang out… over the sides, 700m down, with massive vultures flying thisclose to your nose on the windy edge.

You can do the whole circular route in a day if you really push it, but I wouldn’t recommend it. I spent nearly a whole day just gawking at the North Rim and wish I could have stayed longer.

This is France?!? Moustiers was a great fairytale surprise, but the real reason I was there was this. Moustiers is also the gateway to the great Gorge du Verdon. The Grand Canyon of France. And an Adventureland of fun, with trekking, boating, canyoning, climbing and just plain gawking at all the natural beauty. I’ve wanted to come here since my high school French class. I’d like to show you why you should come here, too.

Came to drive around the gorge, but saw this and thought: Must. Go. Now.

There are stops, teeny stops, all along the narrow rim road. Some, barely the size of your car. But the views are to die for.

Seriously, the color of the river is just unfathomable. Due to a unique algae or something in the water. It’s like it’s plugged in to an electrical socket.

Drive the even twistier and narrower Route du Crêtes (Route of the Ridges) and let it all hang out… over the sides, 700m down, with massive vultures flying thisclose to your nose on the windy edge. You can do the whole circular route in a day if you really push it, but I wouldn’t recommend it. I spent nearly a whole day just gawking at the North Rim and wish I could have stayed longer.

There are Life Lessons to be learned from vultures. Like these Griffon Vultures. They look so majestic floating on the billowing air currents in this gorge, wings outstretched up to 3m wide. So beautiful, their fine plumage. And then one passes by so close like on these steep cliffs, you almost feel their breeze. They pass by so gracefully… you in awe…

and then they turn to look at you and you shriek. Their fierce head, beady eyes, sharp beak and flabby waddle, so frightening. You think you’ve just seen Satan. It’s only then you realize all they’re doing is waiting for you to fall off the cliff and split open on a rock so they can pounce and rip out your jugular… . . .

RRRrrrrrraaaaaaarrrrrr! Every bend of the narrow windy road through Gorge du Verdon opens up into yet another great maw in the earth. I might have this wrong, but I think this section is aptly named the Styx Gorge, as in the river that divides Heaven from Hell. To get a sense of how deep this canyon is, use the cars in the parking lot for scale. 📐 . . .

When I saw these guys, on that green river, I knew I had to try it.

This is where we’re going next…. to rent BOATS!

I never knew a paddleboat ride could be so cool.

Right at the mouth of the Gorge du Verdon, you can rent canoes, paddleboats or silent little goofy electric boats and quietly mosey up the gorge, steeps canyon walls on all sides, emerald green water below.

I choose goofy, which was a blast. (And fitting). No screechy party coves or frat boys blasting a boom box and throwing beers in the water. Listen…🔊

Everyone and everything was silent, in awe. It is awesome.

Pictures do not do this place justice, so make sure to watch the video. You gotta rent a boat. Paddleboat, kayak or electric hummer. Follow the signs down to Lac du Sainte Croix and there are a half dozen nice places to rent boats and you’re off. Heading into the gorge.

The anticipation is crazy. You’re in this slow-moving vehicle on the water, wanting to push the gas or pedal harder…

…and slowly you get there…

But once you pass the bridge…it is ahhhhhhhh.

Everyone’s heading for the good stuff.

I coulda caught flies, my mouth was opened so wide…

It’s all so quiet. No obnoxiousness. Just people smiling.

Pick you poison. Or antidote. Paddleboat. Kayak. Canoe. Or do what I did and get the cute little amusement park electric boats. They free up your hands to take pics and just sit back and enjoy the view.

Every corner opens up to something new..

You can do the whole thing in an hour, or spend a half day just goofing around.

Giddy. Just giddy. But everyone keeps to their own quiet glee. No frat boys. (said the former frat boy.)

Here’s a great list of cool things to do in Gorge du Verdon in SeeProvence.

Here’s an unverified list of great hotels near the Gorge on Trip Advisor. I have one awesome suggestion in another post.

Another list of resources from one of my go-to sources when I was in Provence. ProvenceWeb.

And a good roundup article in the UK Telegraph. http://www.telegraph.co.uk/travel/destinations/europe/france/8698150/Gorge-du-Verdon-France-life-on-the-edge.html

Seeeee. I’m not alone, look at this in Conde Nast Traveler, the most beautiful places in France. .