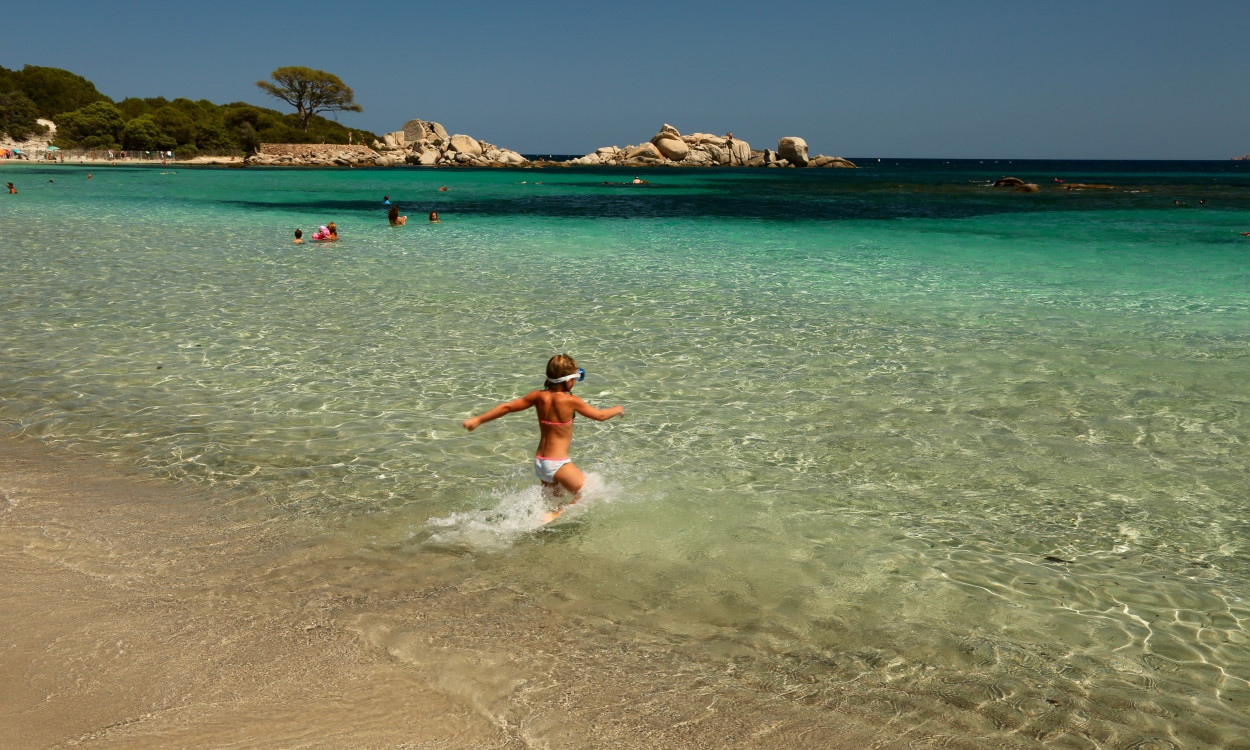 THE KILLER BEACHES OF SOUTHERN CORSICA

[CORSICA, FRANCE] — Smack in the middle of the deep blue Mediterranean Sea are two big islands, Sardinia and Corsica. Almost like twins, ripped apart, both jut out of the sea like breeching whales, with huge mountains in the middle and some of the best beaches in all of Europe, if not the world, ringing their rocking shores.

Corsica is a magical adventure land, with an infinite amount of sporty things to do. Hiking. Climbing. Canyoning. Snorkeling. Sailing. Boating. Or just sit on the beach. The middle is spiked with enormous shark-toothed mountains, some as high as the Alps, often dotted with snow year-round.  It’s only 200km long, but with a wild spread of geography that would rival entire countries 100x its size.  And we’re talking gnarly mountains, huge lumps of rocky, sharp granite that looks like it just bubbled up from below. Nasty mountains, impenetrable in spots and just as hard to navigate. There are no major highways, just windy two-lane roads that rarely have straight spots that weave through the craggy interior. Even though only 200km long, travel times take forever, even over short distances. It can take several hours just to cut across the middle, with zigzagging roads working their way through steep ravines and valleys.

In this post, I’m going to take you on a tour of the southern part of the island and it’s best beaches. Lots of beach pictures.

The Best Beaches of Southern Corsica

Here’s a little picture tour of the beaches of Corsica in the south — at least the ones I’ve been able to get to. Moving counter clockwise from around seven o’clock to 4 o’clock. 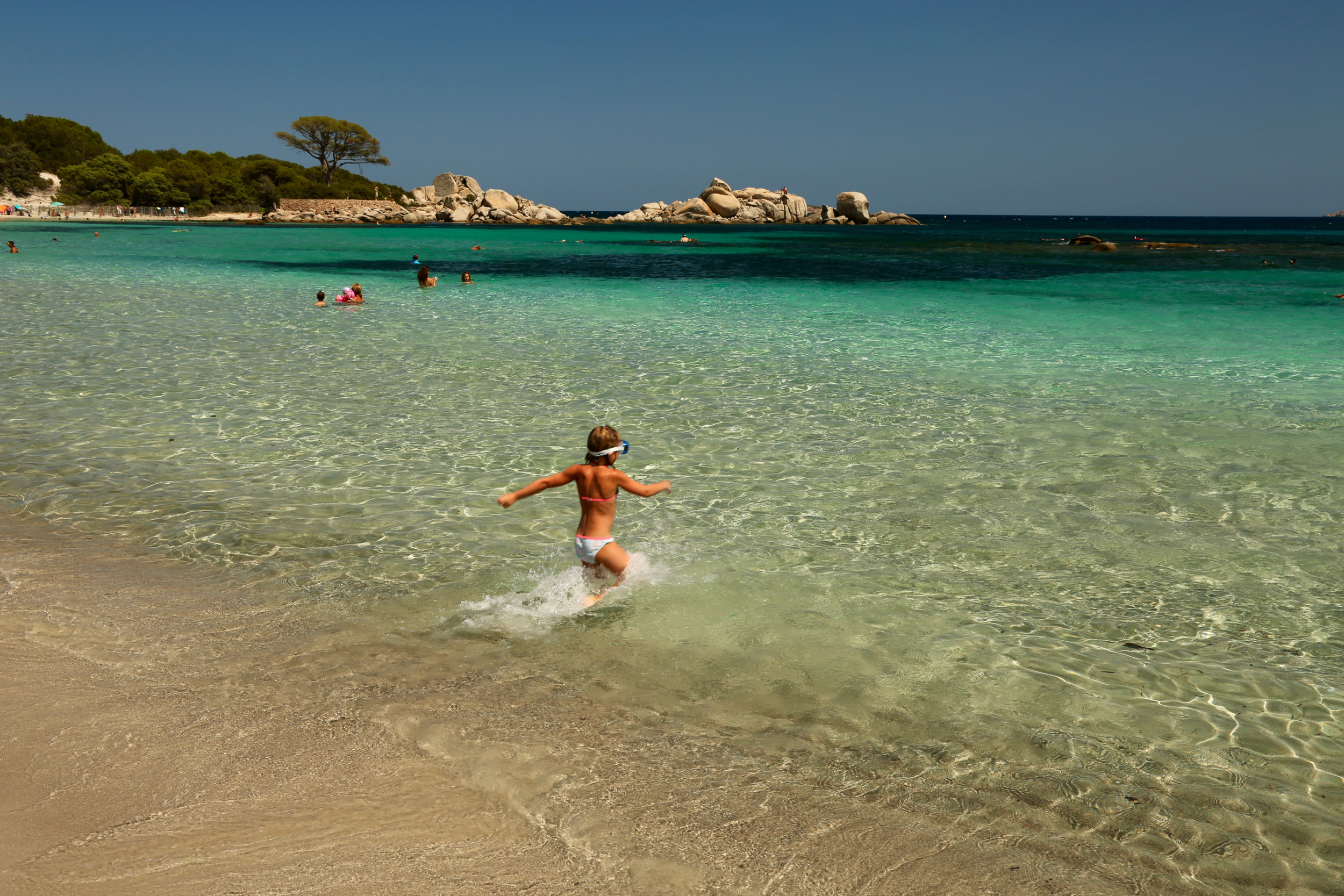 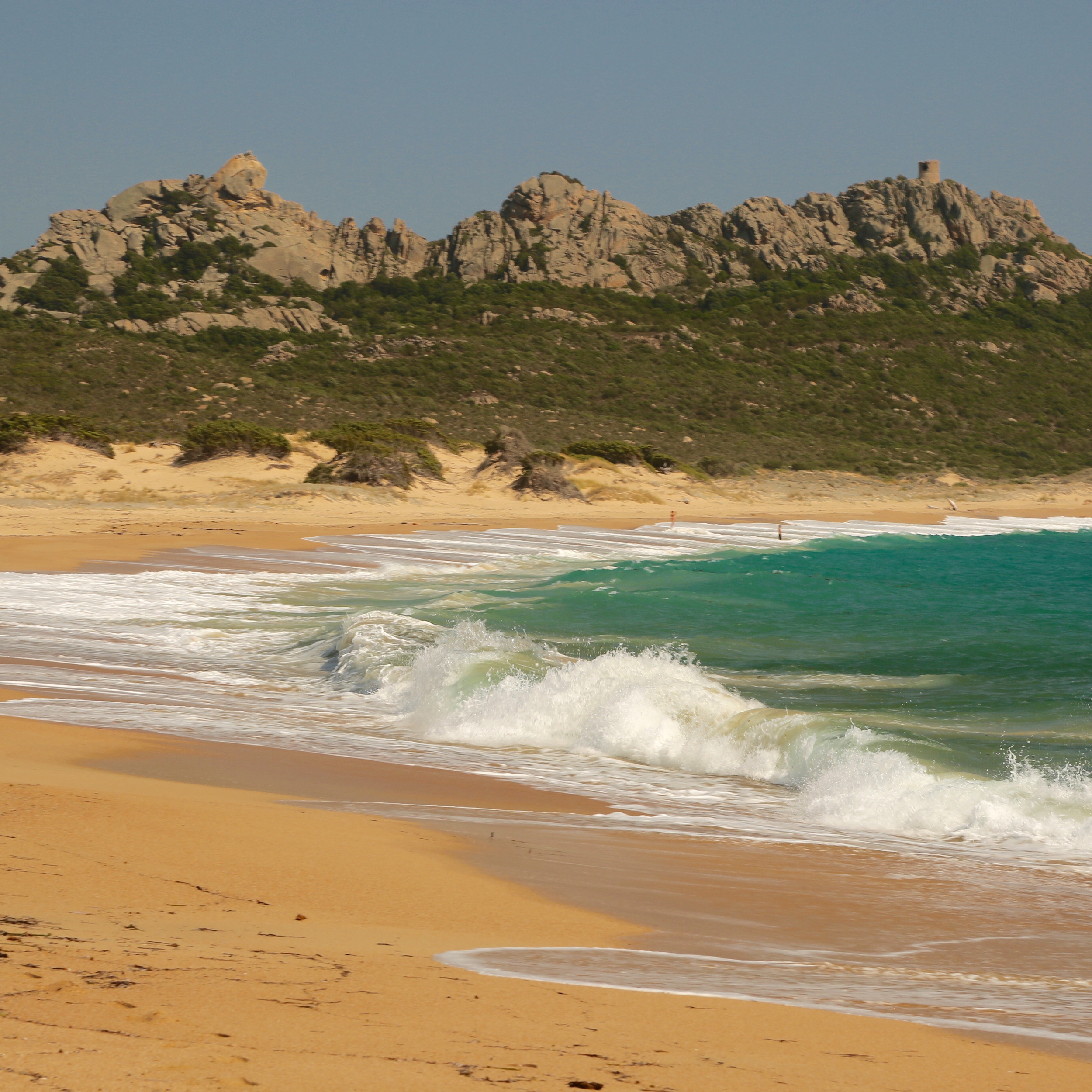 This is not Nice. So this is what Corsica looks like. Not the cranky pebbled beaches you might be accustomed to in a lot of southern France and most of Italy. This is smooth, silky stuff you want to scrunch your toes into. The geology of southern Corsica is so similar to the dreamy velvety beaches of nearby Sardinia, it’s almost like they were brothers ripped apart from each other, which they were, long ago.Severe pointy granite mountains inland, lumps of big soft round boulders and feathery sand on the edges, with see-thru martini water lapping on the shores.

This is Plage d’Erbaju, Murtoli’s pristine beach I showed in my previous post. 3km of sandy emptiness, like a fluffy Golden Retriever, just begging to be walked.
This is not one of those travel brochure shots you see, with a smiling matching white-suited fit couple smiling alone and then when you get there it’s actually chock-a-block with rented beach chairs, tacky vendor stalls and crowded with hoards of families, floaties and sunburned Britons. This is about as crowded as I saw it the whole week I was there, save for the random comings-and-goings of the yachts and sailboats dropping anchor to experience this tropical bliss.
Heaven. On Earth. 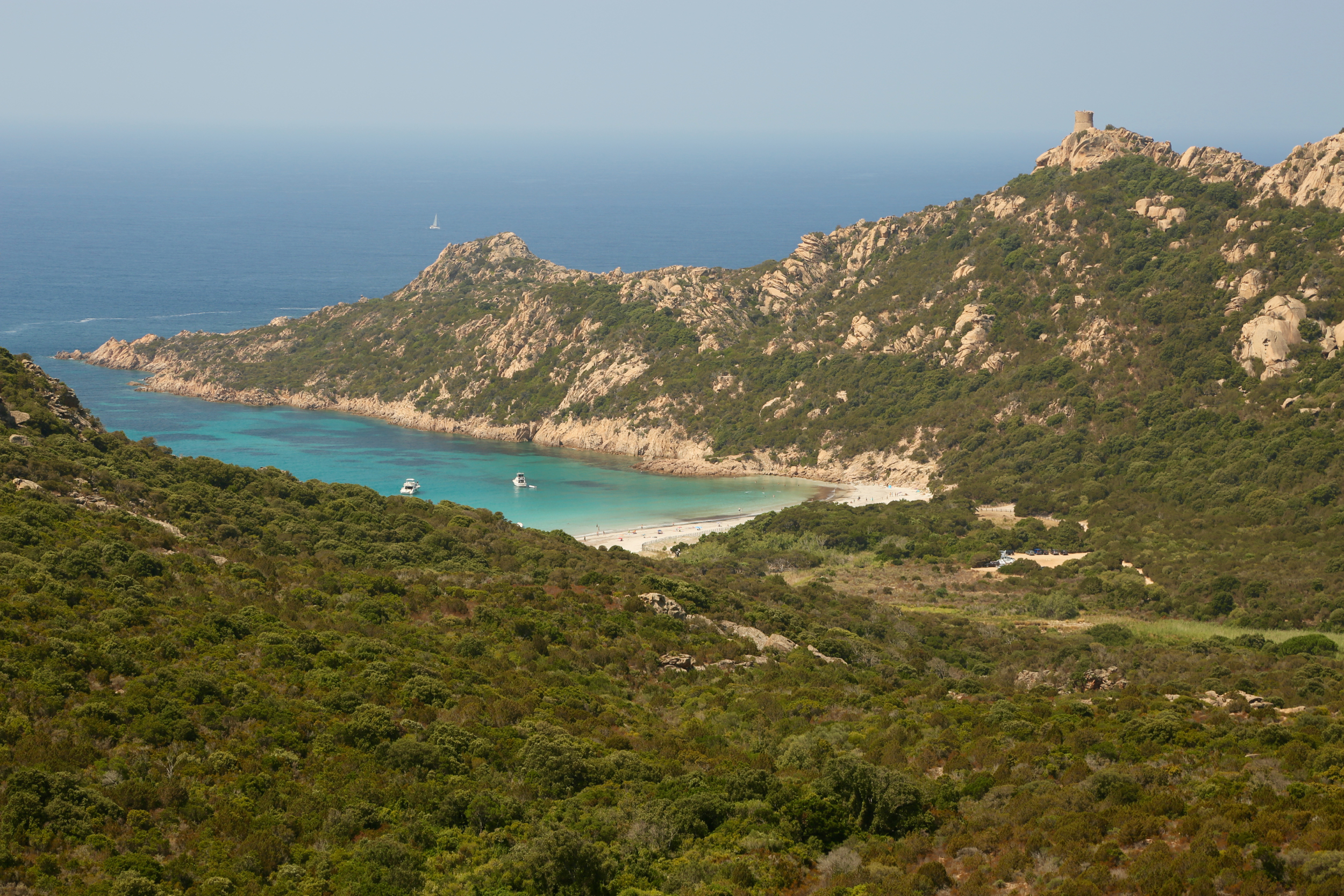 Okay, the beaches in Corsica are some of the most dramatic I’ve ever seen. The interior of Corsica is loaded with steep soaring granite peaks, mountains lined up like shark teeth, then crashing down to sea, ending in silky sand that feels good between your toes.  This is the other side of Roccapina beach. Looks good from any angle. . 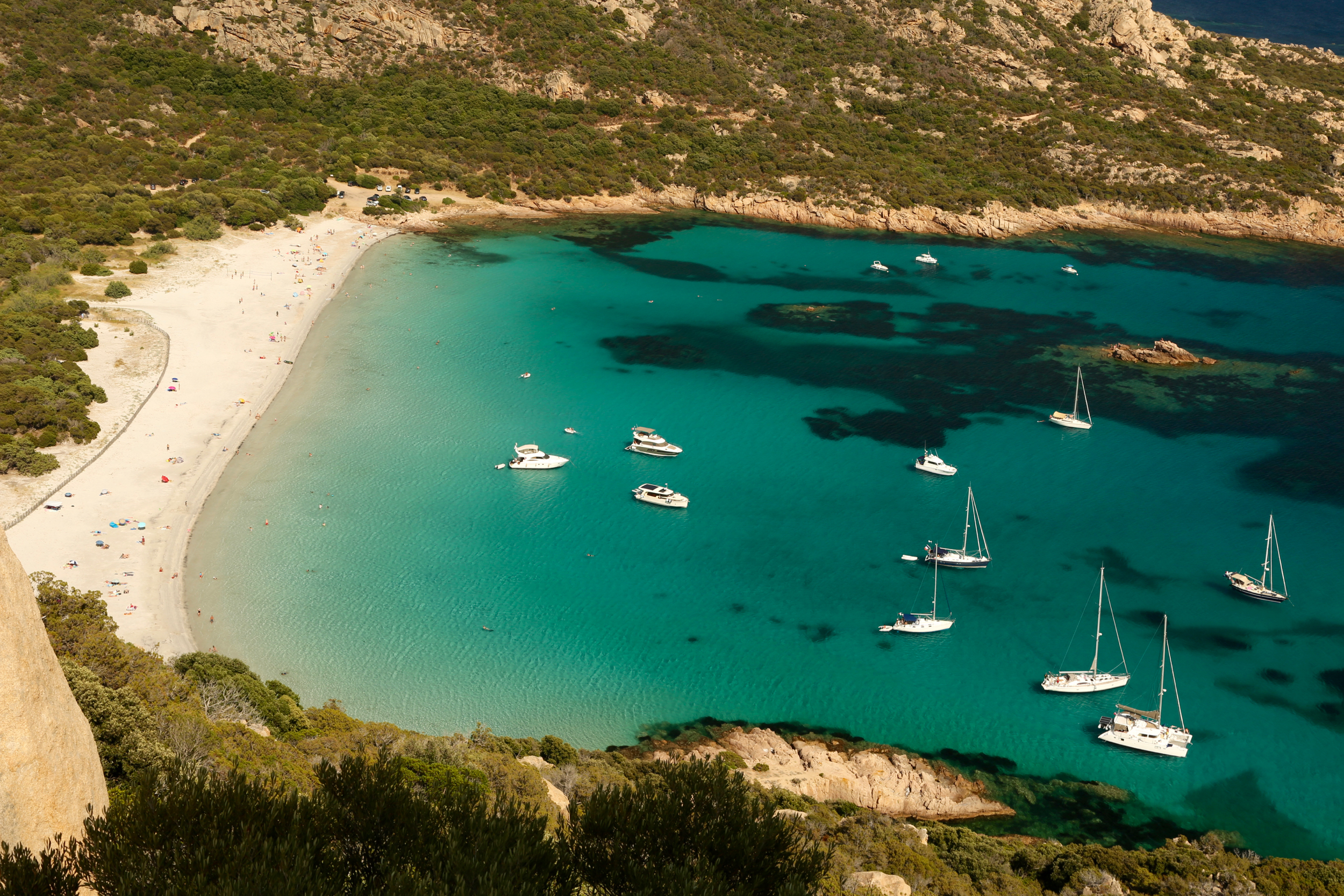 The view down from the ancient Tour de Roccapina 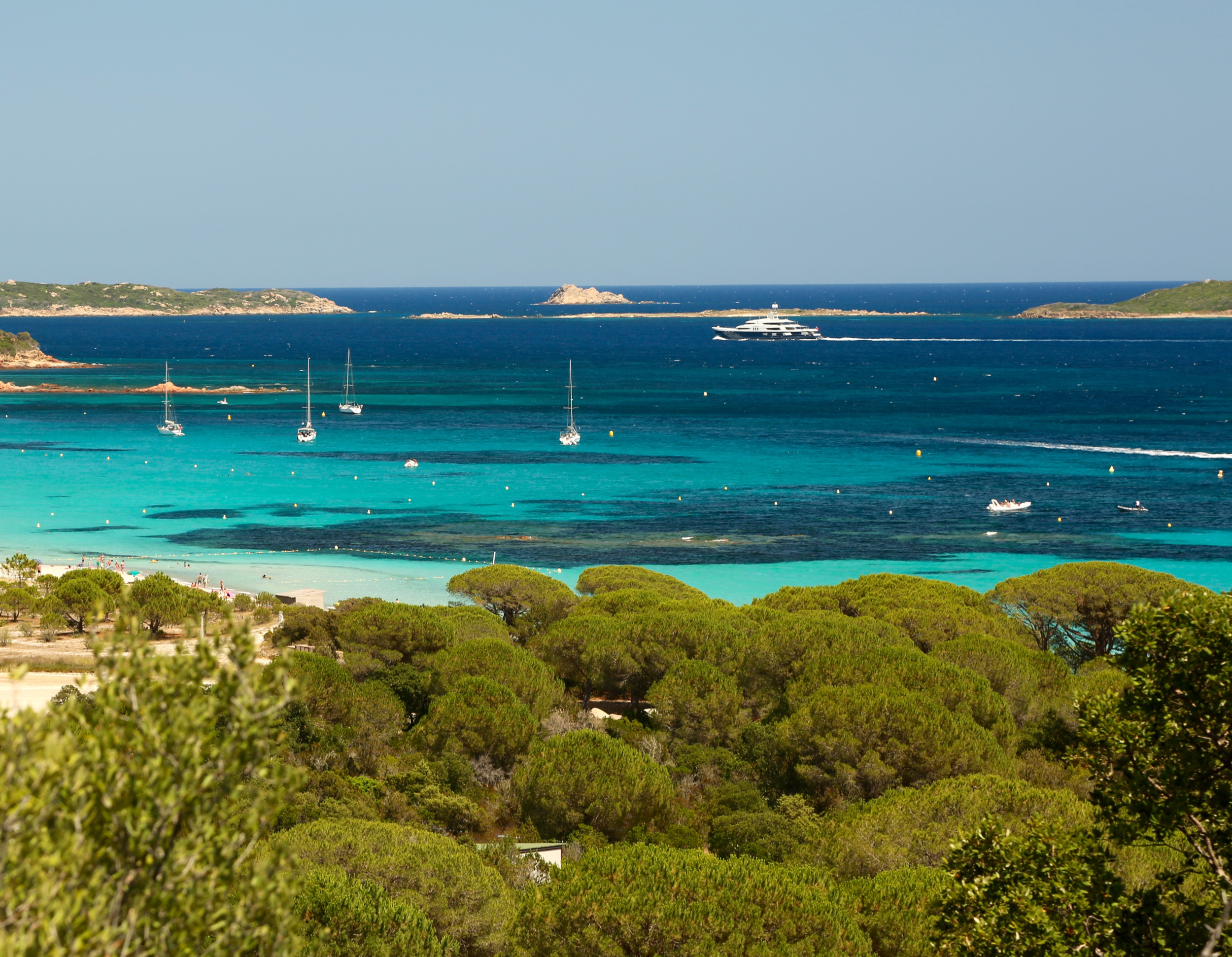 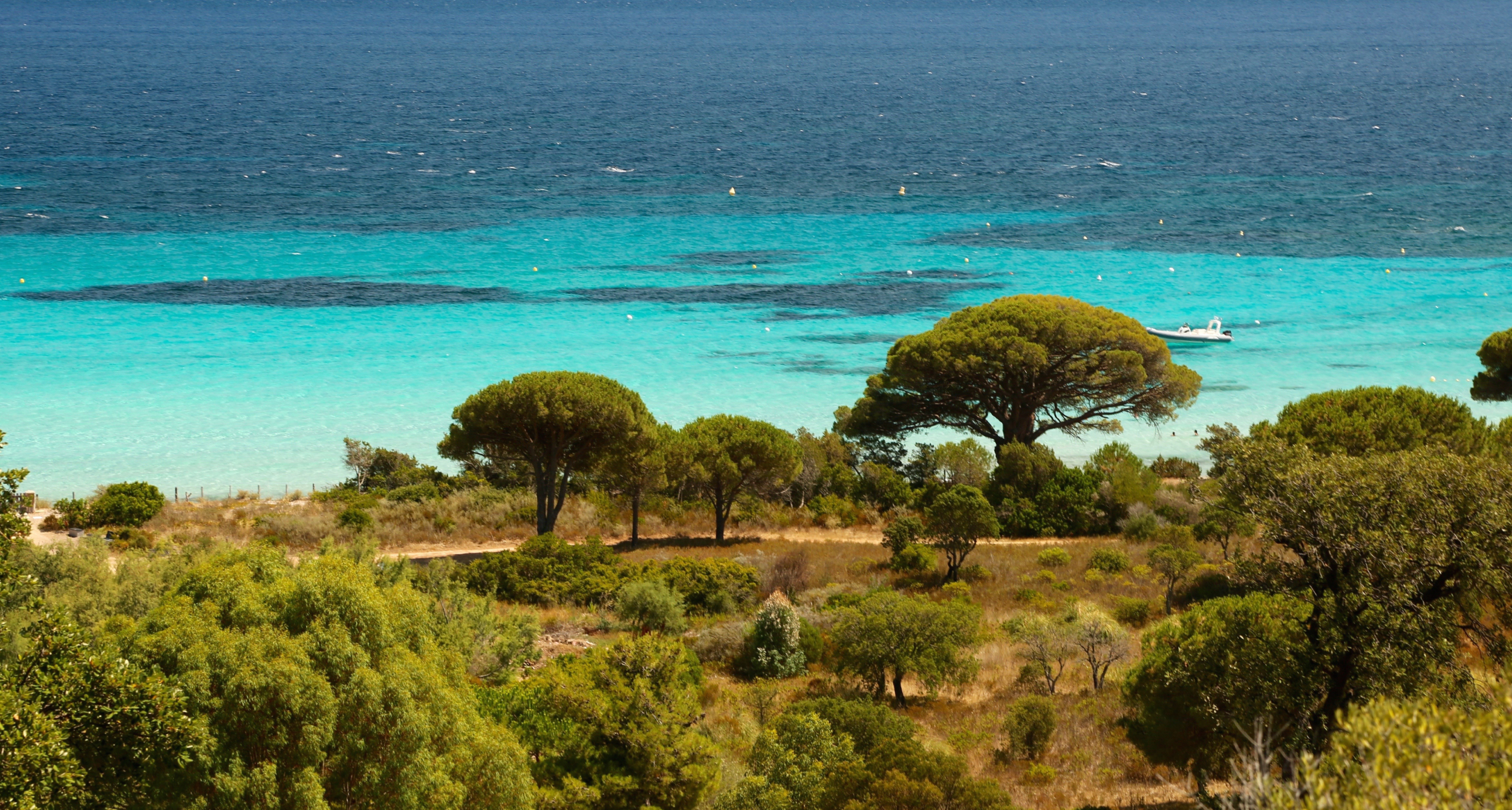 [CLICK ON A PIC TO OPEN UP THE STORIES]:

Plage d’Erbaju in the exclusive Domaine du Murtoli. A 6,000 acre ranch along the sea, with only 15 houses on it that you rent by the week. The vast Domaine tumbles down to the turquoise sea, with a kilometers long sandy beach with hardly anyone on it. There’s another beach around the corner that is so private you can only go there if you are renting one of the houses on it. I so wanted to peek. About the only crowds you run into are when huge yachts and sloops pull in and everyone swims in to lunch. Giggling. Their matching dinghies shuttling their sarongs and sunglasses in for a lazy long meal. When you get antsy hanging out in your private sheepfold with its fully stocked kitchens, there are three incredible restaurants scattered throughout the estate: one camouflaged among the maquis right over there, another on the inland organic farm (where they raise all their own produce and make their own fantastic wine) and yet another gem tucked into a candle-lit cave. 😳 Once you pass through the locked front gates, you never have to leave the property again. Nor want to.

Right next door to Domaine du Murtoli is the famous Roccapina beach, a gash in the rocky shore, perfect for dropping anchor in the crystal blue waters.

Moving counter-clockwise around the island, at the tip is the famous chalky cliffs of Bonifacio.

Plage de Rondinara is a super cool hammerhead cove, with two sides to drop anchor. The water colors just slap you across the face like Vinny Van Gough. 👋

There’s a great polyp of land that juts out like that thing that hangs in the back of your throat, creating a natural cove on both sides and a two-faced beach. So it’s like a mirror image, and two of everything you want. It’d be hard to figure out which one to drop anchor in… a true Monty Python dilemma: “Blue! No, green! Ahhhhhhhhh…..”

Tamaricciu is my favorite beach. This water is just stupidly ridiculous. How many places have you seen seawater this clear?!? Seawater. It’s like swimming in a martini. 🍸 (Which is actually a really good idea. Very efficient.)

It’s just mind-blowing how clear the water is.

Palombaggia is another famous beach in southeast Corsica. A big broad emerald bay lined with pine trees and busy restaurants. Lots of families having fun. Stop here for a light lunch right on the water.

Plage de Palombaggia is one of the more popular beaches of the southeast of Corse. A broad bay lined with pine trees and small seaside cafes.

Palombaggia is another famous beach in southeast Corsica. A big broad emerald bay lined with pine trees and busy restaurants. Lots of families having fun. Stop here for a light lunch right on the water. . .

The smell of pine is everywhere, with steep mountains leading right up to the beach.

Long rated one of the top hotels in Corsica, the Hotel Cala Rossa is a dream. A fine restaurant and excellent beaches nestled in the busy Porta Vecchio waters.

These pics are scans from old prints when I was there a long time ago, sorry for the quality.

See the beach way down there? Besides those stunning beaches we just saw, the cool thing about Corsica is that just a zig-zag straight-up drive away you have incredibly dramatic mountains shooting up thousands of metres from the Med. Lined up like shark-teeth on the interior, they’re almost impassable in many places, with crystal clear blue streams tumbling down big rock canyons into the sea. All on this big little island. Let’s go inland. I want to show you some cool mountainy stuff. 🔝 .

You just can’t tell from the picture just how big this mass of lumpy rock is. But for scale, check out those big (teeny) pine trees. Each is 40-60 feet tall, now multiply that height all the was up this gnarly beast. It’s gigantic.

Aiguilles de Bavella is a must stop. I mean it’s crazy, a half hour drive away from that martini tinted water on the beach and you’re into the thick gnarly raspy Corsican mountains. Like the best of both worlds, all smashed together in this 200km long island.

Scale is everything. You really can’t tell how big that big wall of nasty granite is way over there across the valley until you look at the pine trees at its base. Each one is about 20-30 metres high, so you can do the math on that sheer cliff.

Did you see the new Jurassic World? This place looks like that. I kept waiting for a pterodactyl to woosh down and snap me up. 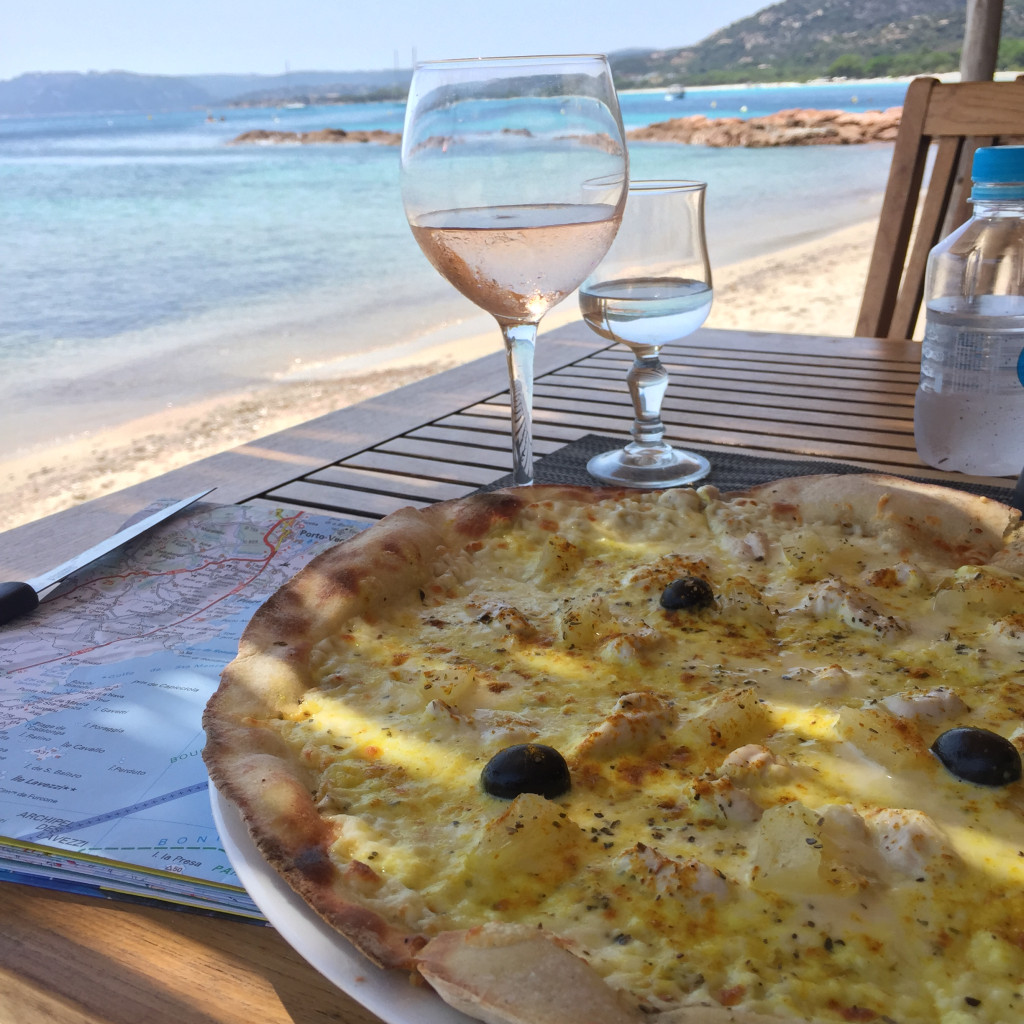 I tell ya, I spent two full weeks in Corsica and felt like I barely scratched the surface. There is so much to see and do on this little rocky island in the Med. I’ll break these posts into several parts of the island.  Also, here’s a picto-map of where all these places are on Corse: 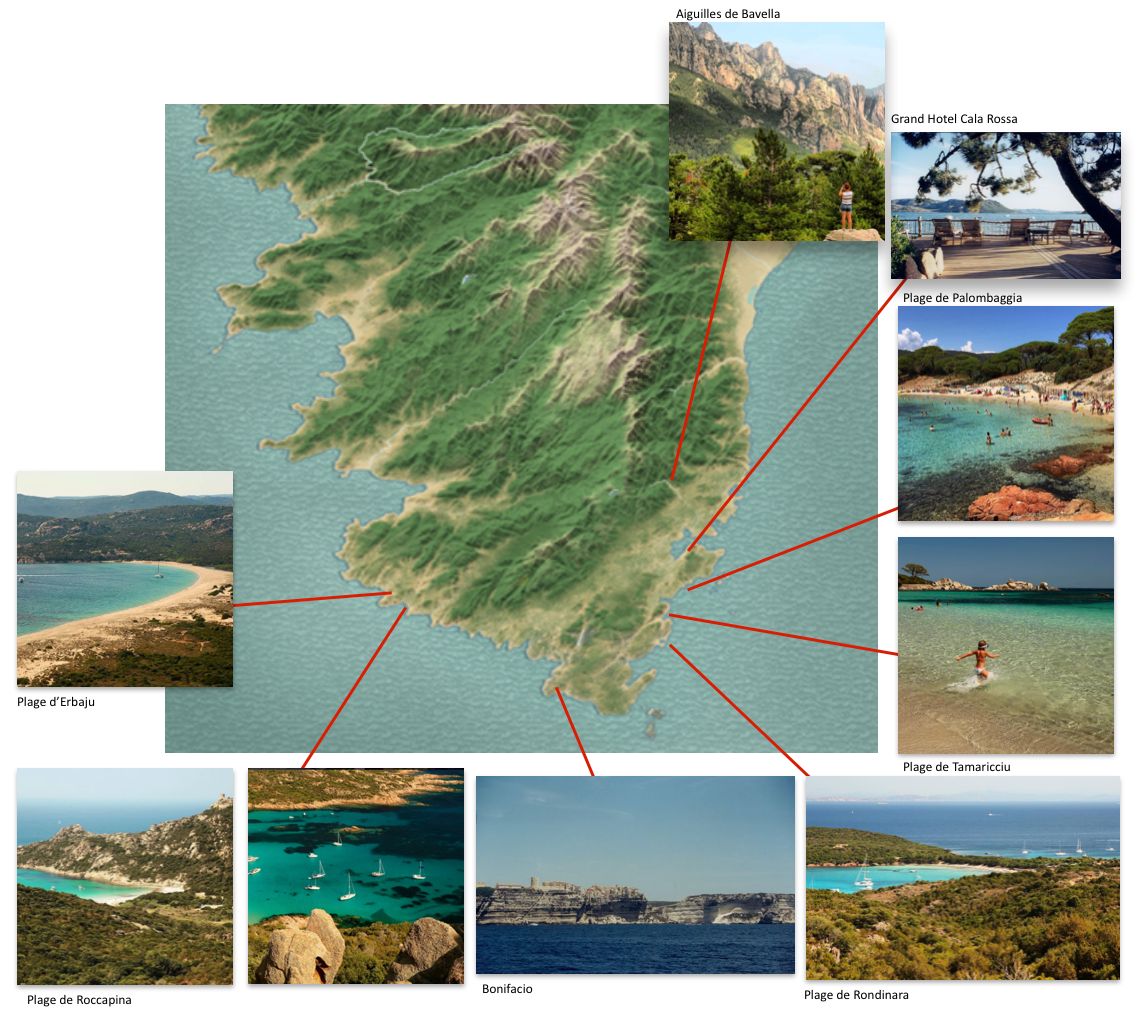 Where to stay in Corsica in Conde Nast Traveler. http://www.cntraveller.com/guides/europe/france/corsica/where-to-stay

The Villages, Valleys and Views of Corsica from Fathom Way to Go http://fathomaway.com/guides/europe/france/itineraries/itinerary-corsica-france/

High in the Hills of Corsica from the New York Times http://www.nytimes.com/2011/08/14/travel/high-in-the-hills-of-corsica.html?_r=1

This is a great guide from the UK Conde Nast Traveller “The Best Unspoiled Parts of Corsica” http://www.cntraveller.com/recommended/beaches/hotels-villas-north-coast-corsica

And from the UK’s Telegraph Travel Section “Corsica: An In-Depth Guide” http://www.telegraph.co.uk/travel/destinations/europe/france/corsica/733092/Corsica-an-in-depth-guide.html

This is an awesome site on Corsica, called Corsican Plaeces.  Here’s their detailed pages and pretty pictures of some of the same beaches. https://www.corsica.co.uk/beaches

And this is a fantastic article from Travel & Leisure called “Corsica’s Wild Beaches, Mountains and Beauty”  http://www.travelandleisure.com/articles/corsicas-wild-beaches-mountains-and-beauty

I’ve never seen this site before, but it has cool insight into other great beaches I didn’t know were there. On World’s Best Beaches. http://www.worldsbestbeaches.net/destinations/europe-best-beaches/corsicas-best-beaches/

And here’s a video slide show of some great pics of Corsican beaches, some I’ve never heard of. https://www.youtube.com/watch?v=90CCkiUW4Uw

Another great overview article of the south of Corsica from Conde Nast Traveler http://www.cntraveler.com/stories/2013-01-23/the-south

And finally, here’s a great overview from The Independent. http://www.independent.co.uk/travel/europe/corsica-beach-bliss-on-a-wild-isle-2346380.html