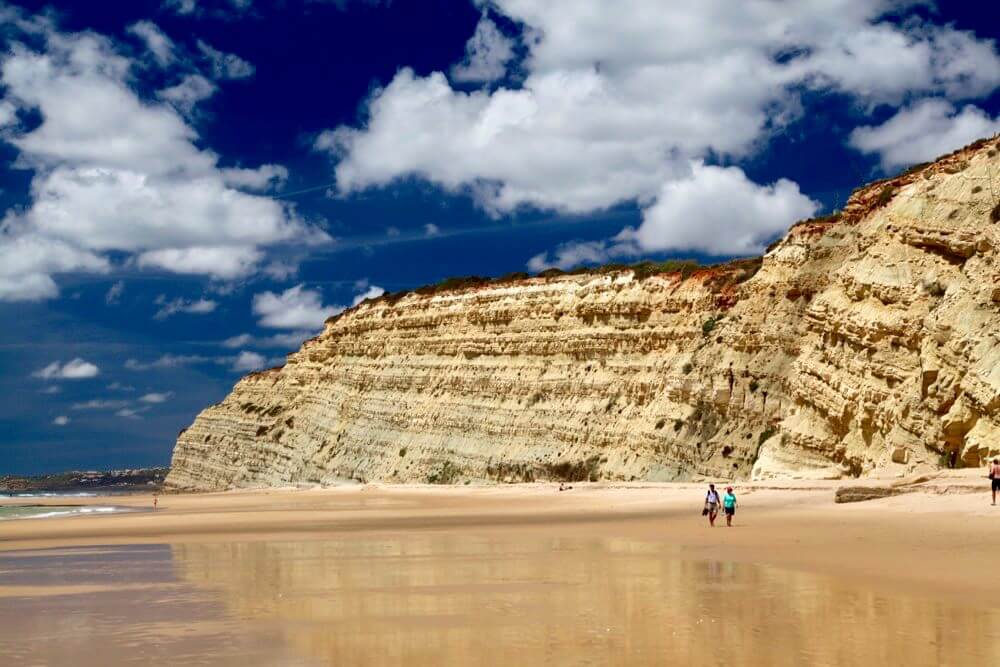 IN SEARCH OF THE BEST BEACHES OF PORTUGAL’S WESTERN ALGARVE

[Lagos, Portugal] — The winding two lane highway runs all up and down the western coast, tucked just under a constant high berm of low hills that act like a windbreak from the coast.

The car weaves in and out of clumps of wooly cypress trees, their wide trunks like the fuzzy legs of a herd of mammoths, crossing small bridges and dodging farm trucks heaving from the local fields. It’s kind of weird, actually. The sun is bright as can be, yet you’re in shadows most of the time in the early afternoon. You can feel the salty ocean breeze but that long forehead of low hills casts long shadows across the road, it’s hard to even get a view of the beaches you’ve read so much about.

And then between the farms and small houses, a brown road sign appears from the shadows at the fork in the road:

The road slices between two folds of hills, making curves around the lush green mounds, the trees thinning to nothing. Finally around one wide curve, you see it.

The Western coast of Portugal’s Algarve has some of the best beaches in all of Europe, rimmed by high cliffs that drop dramatically down to the protected beaches. Feels eerily like Malibu, or the coast just north of Los Angeles, without any houses or city marring the vista. There’s a surf culture here too, the constant wind throwing a predictable train of waves rolling in from the windy Atlantic. Lifeguards, VWs, longboards and long hair the same, just the accents are difference.

The southern flank of the Algarve is much mellower, with more protected south-facing coastlines as the continent skinnies down to Gibraltar.  Mind-blowing beaches dotting the coastline, every half a mile.

A lot of people wrongly think Portugal is on the Mediterranean, as I did, but it’s not.  It’s more like the chin of Europe, with the slight overbite of Lisbon and Cascais.  The flank of the Western coast faces the roaring Atlantic, high cliffs overlooking pocket beaches, with a near constant breeze and unbroken waves. The eastern Algarve to me is like Fort Lauderdale or Punta del Este, beautiful beaches ruined by hi-rises and massive retirement developments, centered around the “capital of Algarve”, Faro, all up to the border with Spain.

I really liked the quieter western end of the Algarve, from Portimao, west and on up the western coast. (Although as you’ll see below, the eastern town of Tavira was a cool exception).  I loved the cool hotel I stayed in outside of Lagos, Casa Arte hotel, which I detail in a previous post and think you should stay there as your centrally-located base to hit all these beaches.

“There’s one of just about every type of beach along the western Algarve in Portugal. Long ones. Short ones. Rocky ones. Flat ones. Colorful ones. All perfect. It’s like the Costco of beach selection. (Or Tesco, if that’s your pref)”

So here’s my recap of the best beaches I’ve found in the Algarve.  I didn’t get to hit them all as I was only there for four days of exploring. You can match up the towns on a map for greater details, but I’ll essentially show pictures from the west to east.

Up near the border where the Algarve bumps into Alentejo, Arrifana is one of the most dramatic beaches on the West Coast. Steep cliffs overlooking a broad beach, perfect waves breaking. A small village creeping up the sheer cliffs. If you surf, this is your place, as it seems like the whole town is. 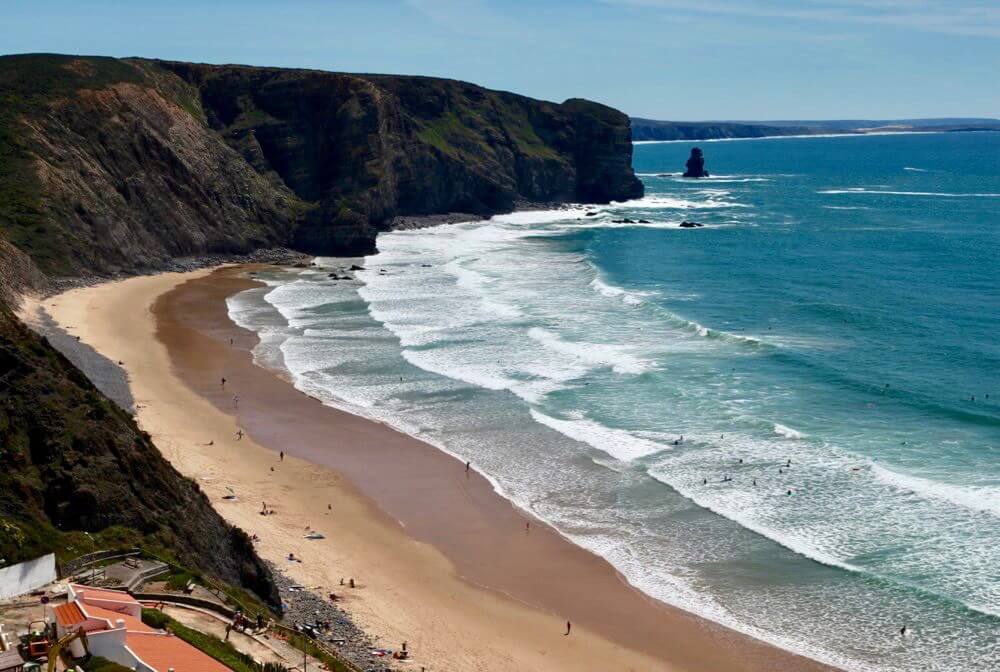 This is about as perfect as it gets. There’s an upper village you cruise through, then drop down to smaller buildings bunched up on the cliffs. A few restaurants. All surfers. 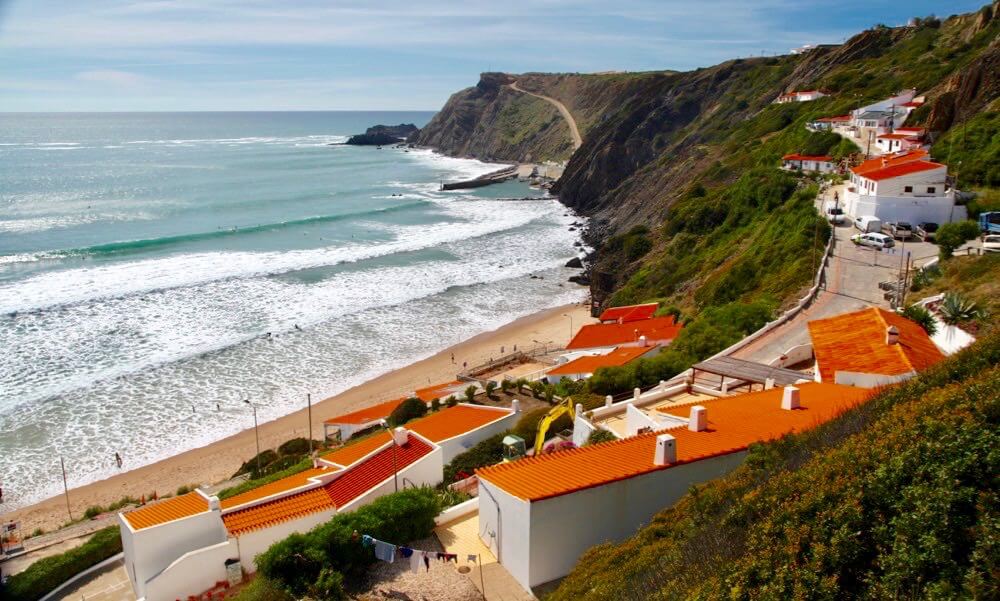 The whole beach is surrounded by towering cliffs.

It’s a good steep walk down the zigzag road.

Look for the name of this little surfshack restaurant, right off the single path that leads to the beach. The food is awesome and you look directly over the crashing surf.

See what I mean?

The view from the Restaurante da Praia

Just north of Arrifana is Praia Amoreira, a dramatic little beach and river combo that’s at the end of a national park. 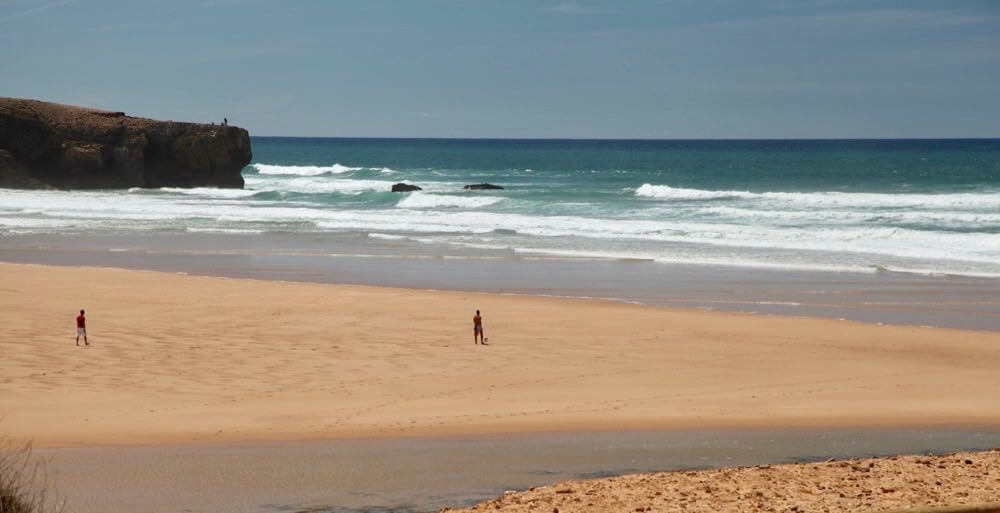 There’s a wide open beach and a small river that cuts through it. People raved about this beach, I though it was just okay.

There’s a decent little restaurant shack serving simple food overlooking the beach. But try to dab in off-peak hours since bus tours come in and clock up the place with raisins.

There’s a wide open beach and a small river that cuts through it. People raved about this beach, I though it was just okay.

Further down the coast is Praia do Amado — this was my favorite one. Totally undeveloped. Just unbelievable colors of every shade of red, at the end of a national park. As perfect as it gets. All the reds — Praia do Amado

To get there, you park about 15 mins away and walk along a beautiful wooden path the rides along the cliff, with stunning views and bright wildflowers on all sides.

Have you ever seen so many reds? Normally in canyons in the deserts of Morocco, Argentina or the Atacama, but never have seen them pour into the sea.

Just can’t get any better. Looks like California in the early sixties. Just different accents.

I saw about six people for the several hours I was here.

Cabo de São Vicente is the western most cape of the Algarve. A picture-perfect lighthouse and steep cliffs. Signs indicate this is the “End of the World” — or so they thought in Olden Times because they knew of nothing on the other side. Quite lovely and easy to come out here, then stop for lunch or a beer in Sagres.

As always, there’s a fort along the way.

Such a perfect place for a shot. 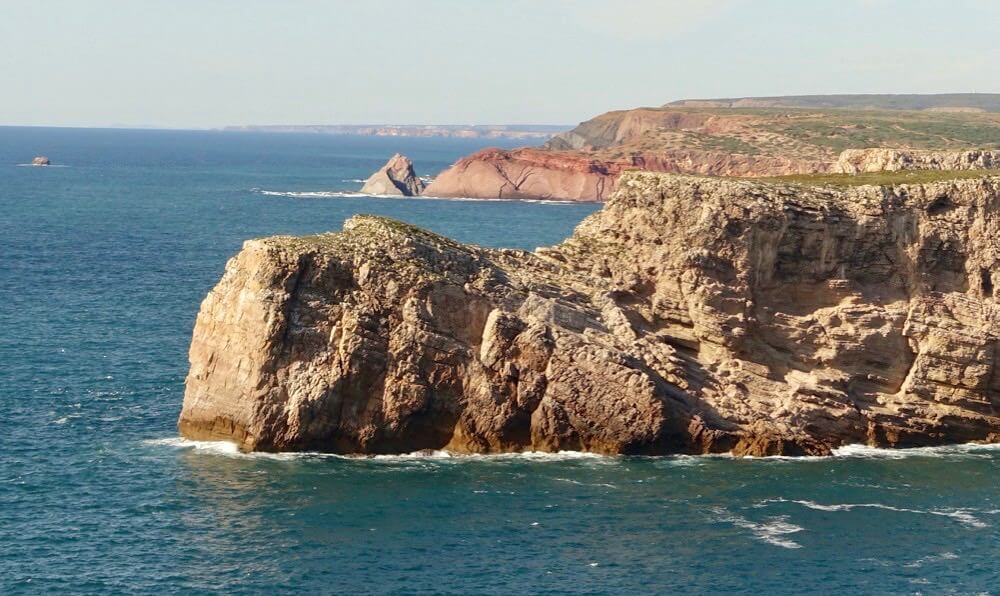 You can see why the OGs thought this was the End of the World.

Porto de Mós was my second favorite beach.  I’d read it gets really crowded, but the day I was there, hardly anyone.  And just the most dramatic backdrop of chalk cliffs, blue sky and shimmering sand. There’s plenty of parking here and you kinda cut through a suburban neighborhood to get here: 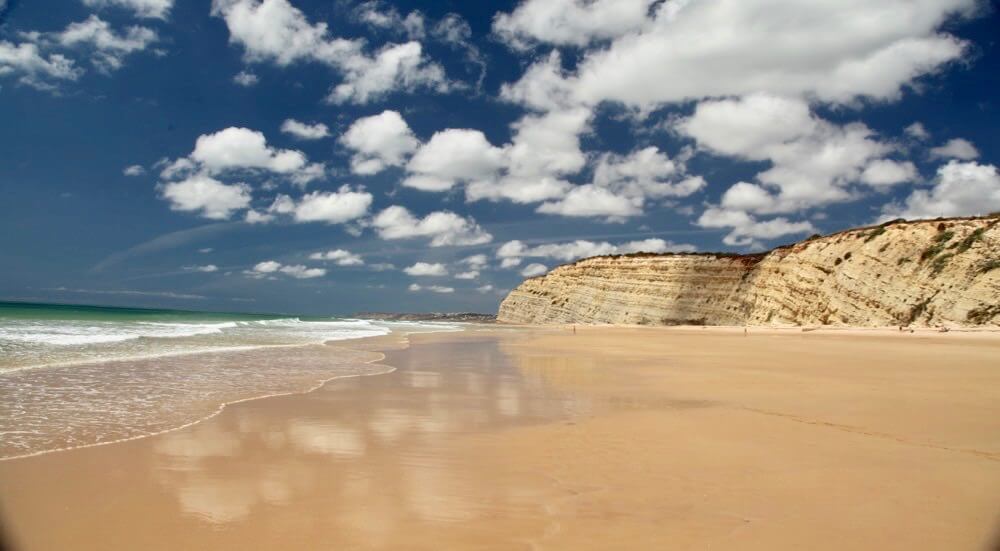 This is getting into to stuff you see on language books about Portugal — and why I was here. I’d always seen these dramatic beaches in the Algarve have always wanted to come here. Praia da Dona Ana is kinda strange. You’ve probably seen pictures of its dramatic beach and rock formations. But what they don’t show you is that there are a gazillion ugly hi-rise apartments from the 50s/6os built right up to the edge, right behind where I was taking there pictures.  Still, if you look the right direction, it works…

Lagos isn’t the prettiest towns, although it has its charming pockets. Walking streets lined with modest restaurants, nothing too fancy.  But its a great base to explore all of the western Algarve.

I’d seen pictures of Tavira’s distinctive angled roofs and heard it was a beautiful little town.  I think compared to the rest of the eastern Algarve cities, yes, it is.  Great for an early morning walk and coffee, but then head on down to the port and find the ferry to take you out to Ihla de Tavira a vast flat island covered with sand. Perfect to escape the crowds of the mainland beaches.  The ferry only takes about 15 mins.

Tavira is known for these distinctive rooftops to drain the rain.

There’s a nice church and main square you can hike up to, overlooking the whole city.

The Ihla de Tavira is long and skinny, all sand. Looks a lot like Padre Island, Texas. There are chairs you can rent in beach areas, some restaurants or you can wild it with your own stuff.

There’s a crazy astronomy attraction that’s in an old water tower if you want to kill time, mostly for the views from the top of the tower…

…but I put this here because the sign made me laugh.

To get your bearings, here’s a YSGH Picto-Map (TM) of all my favorite places in Portugal so you can match up the picture to the map. As you’ll see, these are only the best beaches I could find in a few short days. There are lots more. Can’t wait to come back and discover the rest. Here’s a great new article from the UK Conde Nast Traveller on the Costa Vicentina of Portugal.  Great tips and reinforcement of my recommendations above.

Continue reading...
2 Discussions on
“IN SEARCH OF THE BEST BEACHES OF PORTUGAL’S WESTERN ALGARVE”