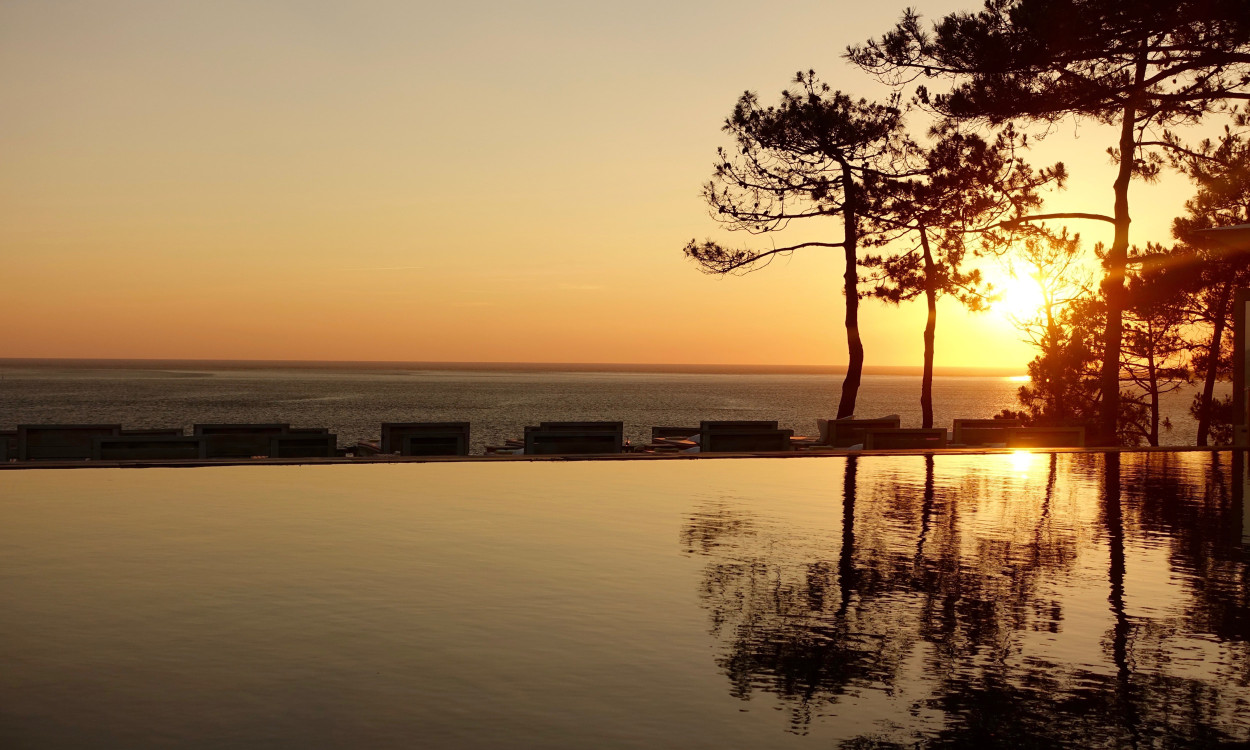 A HIP HOTEL ON AN OCEAN CLIFF, RIGHT NEXT TO EUPOPE’S TALLEST SAND DUNE.

[PYLA-SUR-MER, FRANCE] — I didn’t even know this beast was here.

Never heard a squeak of it before. I actually came here in search of a beautiful hotel which mentioned its prime location next to the Dune du Pilat, about an hour south of Bordeaux. Okay. So can I get room?

But when I pulled up, holy cow! My dumb fortunate luck led me to yet another amazing natural phenomenon — the largest sand dune in Europe. 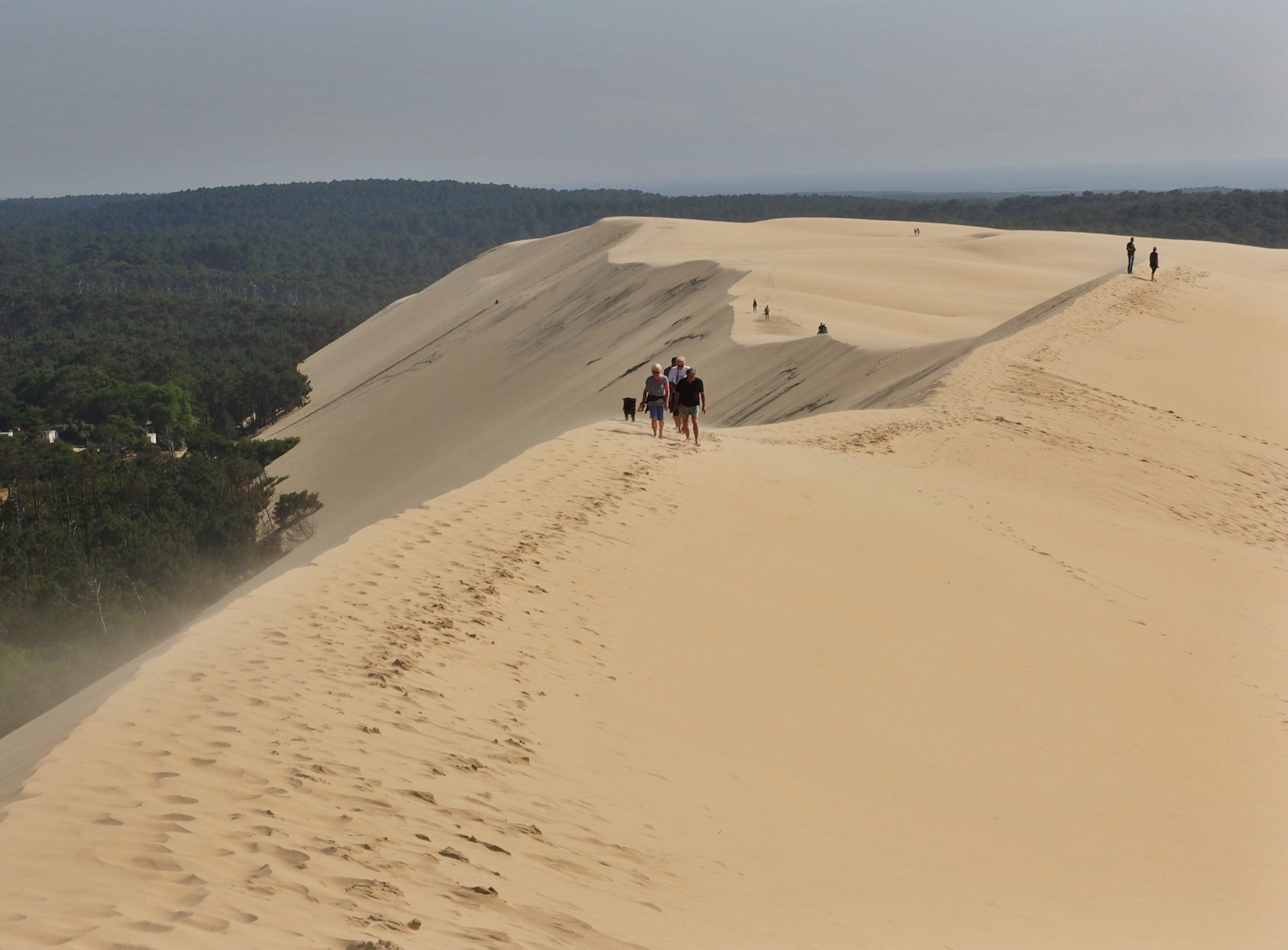 Almost 3km long and about 110m (300 ft) high, this giant Gibraltar of sand stands between the shimmering Atlantic and an inland pine forest, with fierce winds that add to its height every year, shoving it inland, swallowing up houses and forests in its path. In the 1700s, maps show it was actually way off-shore, now it’s like a living, breathing Le Blob.

By accident, I found my entertainment for the next several days. Running up and down this big dune like a sandy Stairmaster. This thing is so huge that it swallows a up a million visitors a year and you’d hardly know it. People are hang-gliding, paragliding, hiking, taking selfies and rolling down the hill like kids. I felt like I was 9.

But the views way up here are something else. Facing straight west, with the sun shouting at you, the glimmering Atlantic has never looked better. Faint sandbars appear and disappear with the tides, which is why this and the neighboring Bassin d’Arcachon are know France-wide as having the best oysters and shellfish.

So prepare to see a lot of pics of a big sand dune. And one very cool hotel. Click on the pics below and follow along the slideshow.

When you first walk up to the dunes, you really can’t see how big it is. Surrounded by stubborn pines, you finally start to get a glimpse as you get closer to its base and then look UP.

I didn’t even know this beast was here. I sprinted up to the top in stiff winds and you can see what it formed right here. Almost 3km long and about 110m (300 ft) high, this giant Gibraltar of sand stands between the shimmering Atlantic and an inland pine forest, with fierce winds that add to its height every year, shoving it inland, swallowing up houses and forests in its path. In the 1700s, maps show it was actually way off-shore, now it’s like a living, breathing Le Blob. It was as low as 35 metres in the 30s and has kept growing and moving inland.

This dune is like one big sandy stairmaster. 30 stories Up. 3km long. Which, if you walk 3km in the sand, it’s like 9. I just went up and down this thing for days. My calves were barkin’. So, for perspective, look at the height of the waves way down there, then do the math. Can you see that one teeny guy at the 🔝 all by himself? He was the only one on the dune that morning. King of the Hill. Arrrr-har-harrrr. .

France is down there. It’s a whole ‘nother world up here.

It takes a long damn time to walk the length of the dune. 3kms long, but walking in sand makes it feel like 9,

But once you’re up here, the views can’t be beat. Wispy sandbars float on the blue sea. And come and go, depending on the tide.

You really don’t realize how steep it is until someone goes over the edge and you can really tell that it’s a long way down.

Slowly she goes, munching up the pine trees every year.

Up here, on the tallest sand dune in Europe, a stiff breeze coming off the gentle Atlantic shimmering below, you feel like you’re walking in the clouds… .☁️ ☁️ ☁️ .

This was just so peaceful to watch. Check out the video to see them float in silence.

I thought this was just graffiti when I first walked by it. But then the distinctive shape finally hit me like cold water. These were old blown up bunkers from WWII. I googled it later. The Germans defended this bay for a safe harbor. Eventually, they lost.

It is almost chilling to be this close, in this paradise and think about what went on here.

It’s actually a nice beach, especially in France. But pay attention to the tides. This bay inlet is so shallow that the waterline dramatically recedes and nothing but sea creatures and moss. Other times, handling any beach at all.

But this was the real reason why I came here. the stunning La Co(o)rniche boutique hotel.

That big dune was just something I stumbled upon, but this right here was why came to this steep hill overlooking the Atlantic, an hour south of Bordeaux. This exact scene. 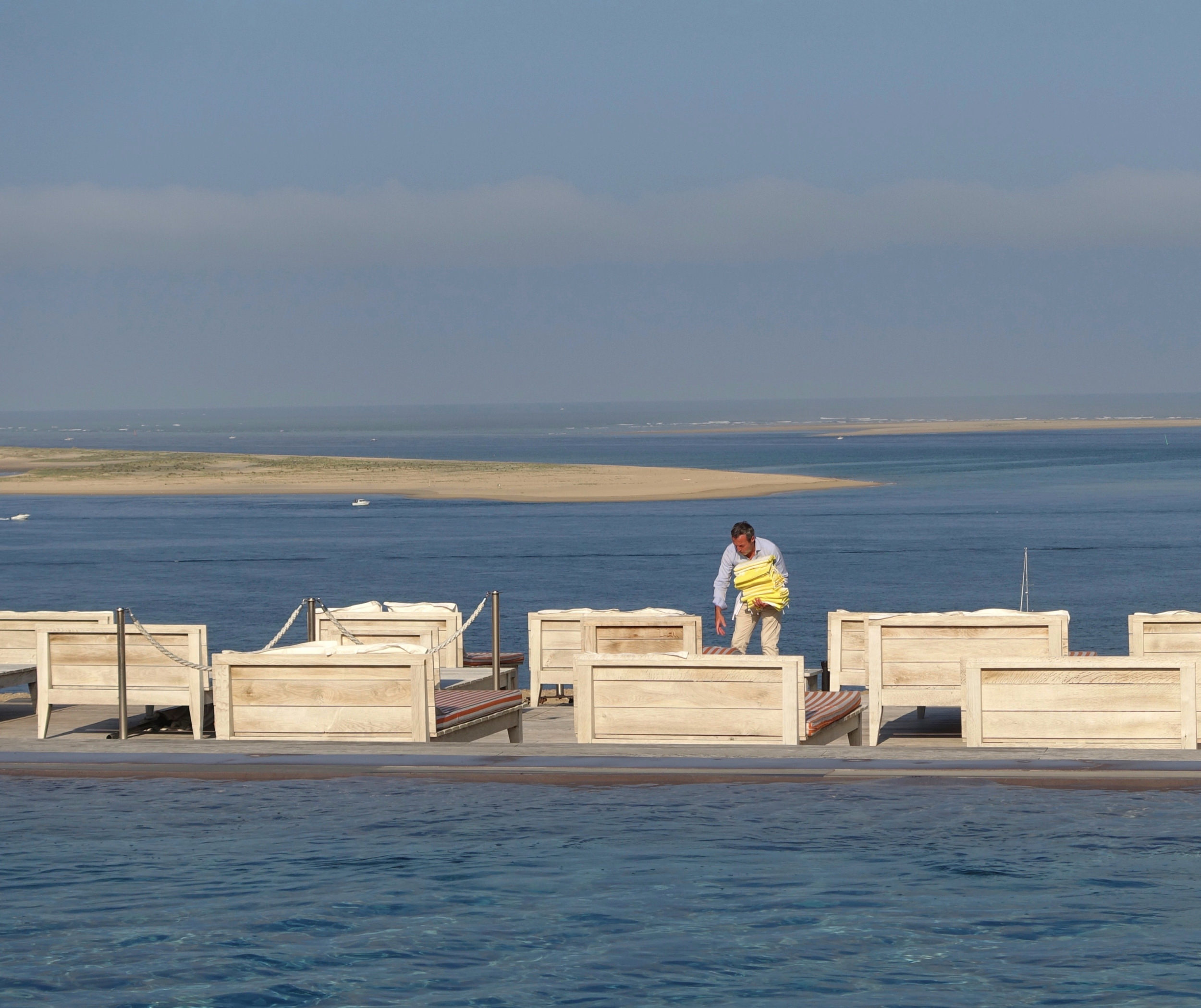 It wasn’t easy, actually. Or planned. I was sitting in a rented farmhouse in the Luberon, way down in Provence, wondering where to go next and that’s when I saw it. This.

I was looking to the south, actually. For something on The Med. “Wow, where is this?? I don’t remember Bordeaux looking like this.” 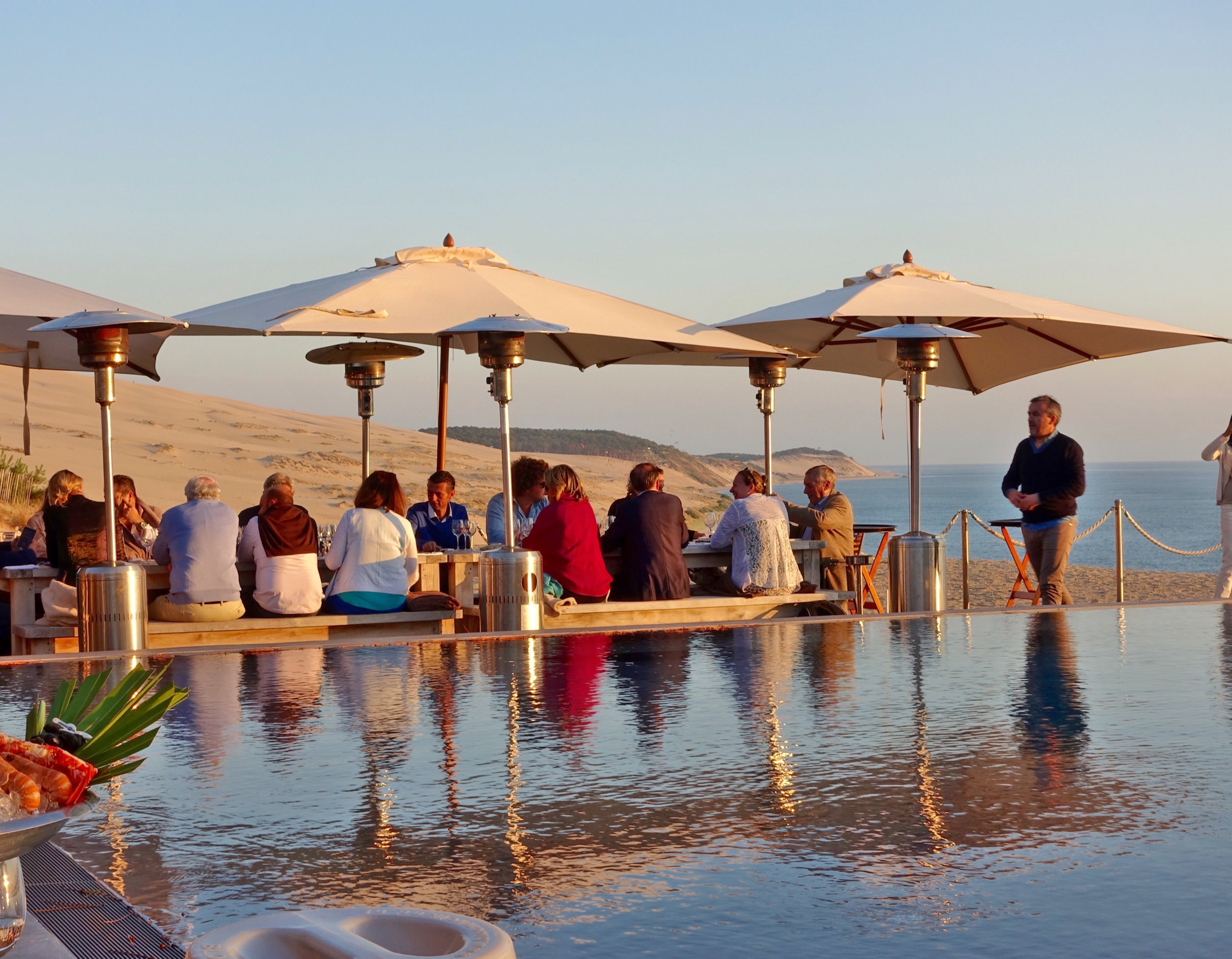 I can’t believe I’d never heard of La Co(o)rniche before, having memorized nearly every listing in Relais & Chateaux, Mr & Mrs Smith and TabletHotels…🔍 It was in none of them. Where did this come from?

Yup. I had to go there. And so I packed up my horse and headed way north, toward the blue coast.

And that’s how I ended up here… 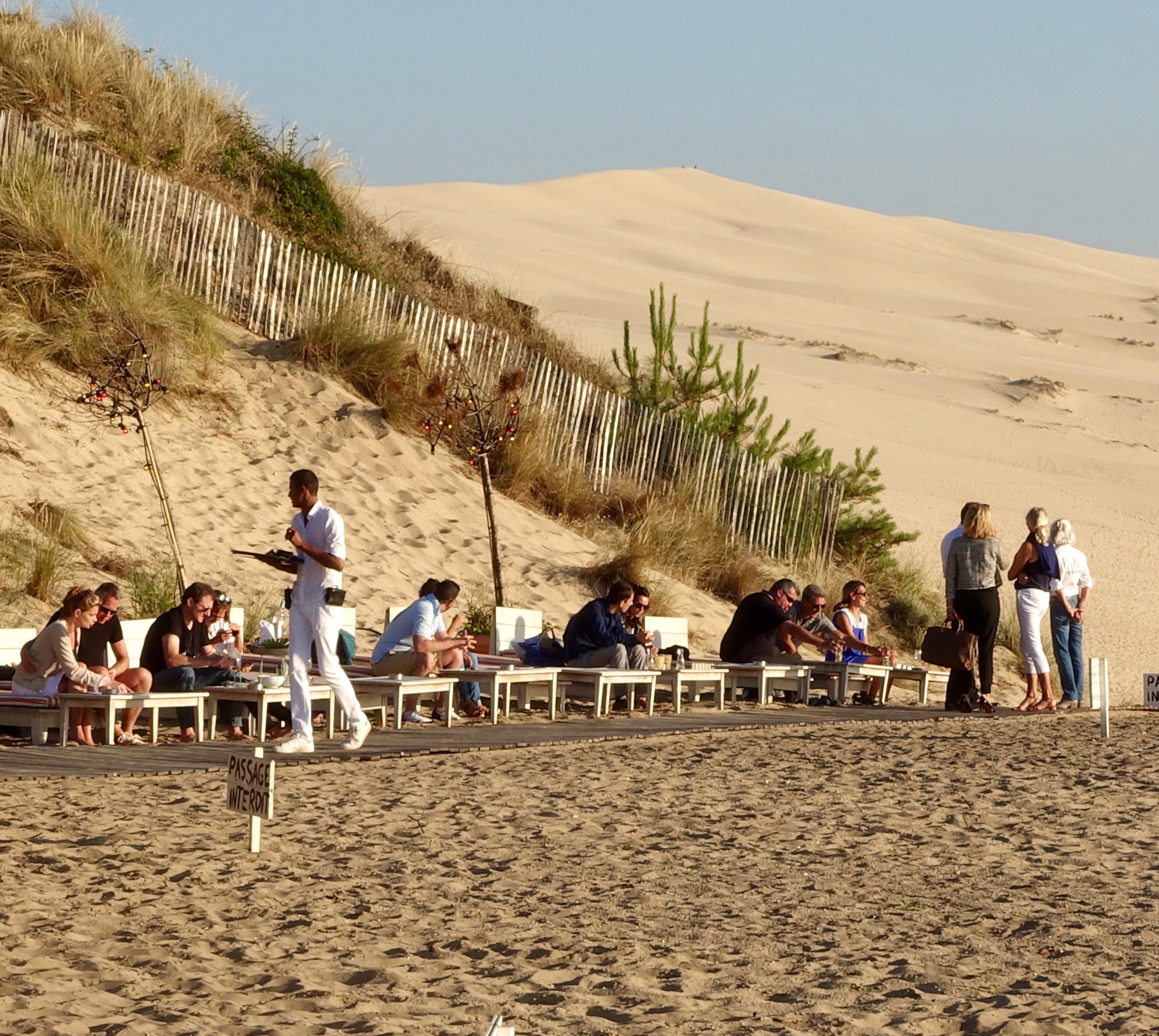 So here’s how it works at La Co(o)rniche. Every late afternoon, people start arriving at this cliffside heaven, taking their grandstand positions to watch the sun set. You can grab a table in the restaurant, along some bar tables and grab some snacks, or line up on these cozy beach beds (as @forksociallab so rightly named them) where white-clad nice people fetch drinks for you so you don’t miss a glimmer. Doesn’t matter how or where, everyone’s here for the same thing. A sunset and a smile. And the restaurant is here to make that happen. Especially the smile part.  If I had a dream on how I’d like the world to be, it would look like this.

.“The most impressive place, the most beautiful, the most poetic, the most surreal, the strongest forces of nature; it is one of the most beautiful places in the world. “ — Philippe Starck I couldn’t have summed up this hotel better than Monsieur Starck. La Co(o)rniche. (The parens are on purpose, I’ll explain more better later).

The hotel itself is like staying in a funky rich friend’s villa. (Not that I have one of those..). An old hunting lodge, then converted into a swanky ’30s era hotel, then reinvented again in 2010 by Philippe Starck. Sturdy and rich on the outside, fun on the inside. Like a great big Reese’s Peanut Butter Cup you can sleep in.

The hotel itself is like staying in a funky rich friend’s villa. (Not that I have one of those..). An old hunting lodge, then converted into a swanky ’30s era hotel, then reinvented again in 2010 by Philippe Starck. Sturdy and rich on the outside, fun on the inside. Like a great big Reese’s Peanut Butter Cup you can sleep in.

The cool entry way. Everyone stops along the way to take pics of the tile.

Sitting high on top of a great hill overlooking where the blue Atlantic intersects with the oyster-famous shallow waters of the Bassin d’Arcachon. It leans right up against the great Dune du Pilat in my previous posts. Why NOT put a hotel here? Once an old hunting lodge, then a glamorous hotel in the ‘30s, then redesigned all over again by Philippe Starck in 2010, this place is an ingenious mix of old and new, blurring the lines where the hotel stops and nature opens wide. Wait until you see what they built here…

Yep, this is where I spent a lot of time.

There are no bad view, no bad tables.

Everyone claps when the sun dips below the horizon

Just when you’re having fun… along comes a paraglider…

So in summary, here’s why you should go here:

Pre-sunset is the gathering time, on a cliff overlooking a gorgeous bay and Europe’s tallest dune. People walk in, are greeted with smiles and white Adidas and warm sun and, to a person, everyone stops in their tracks, exclaims “holy shit” (or the French or Spanish equivalent) and instantly loses their cool with excitement. No matter how cool or worldly, they all get giddy with the view.

There is no pretense. There are no bouncers, no red ropes, no stupid bottle service. Just nice people, speedy service and impeccable seafood. Everyone gets a view.

And everyone oohs and awes as the colors change from yellow to orange to pink to blue to purple. And they sigh as the sun ducks down and hug their date. Enjoying oysters caught below the cliff, with wine from around the corner. And smoking like it’s no big deal. Just celebrating the sun, the sea and good food. This is the way life should be.

The Rooms at La Co(o)rniche 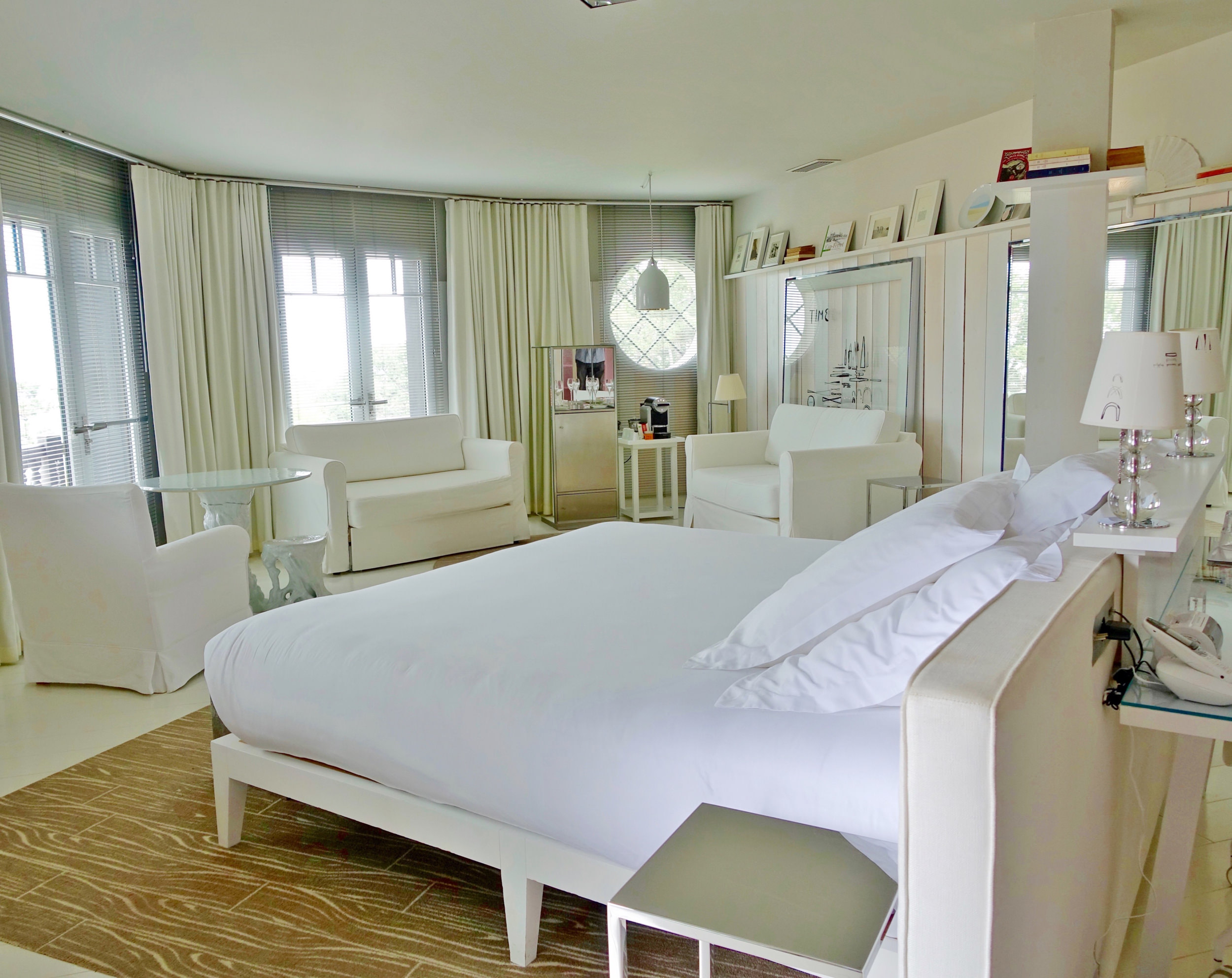 White womb. Everything was white. The tables. Chairs. Television. Hair dryer. Coffee maker. Even the power chords. White.Like sleeping in a cloud.

Even the toilets are elegant

The subtle oyster theme is woven into everything, including this cool desktop. Not just for decoration, it actually lists Philippe’s favorite places in the area.

I just loved the subtle oyster theme, everywhere. Like these Tidal Charts in the toilet. Just for humor and decor. And they’re actually helpful

The attention to detail is everywhere, including this so so subtle paint scheme. Someone spent a lot of time on this.

And all the branding works the same way.

There is a wing that goes behind the hotel with more rooms. They overlook the bassin and actually I expect are much quieter away from the pool. 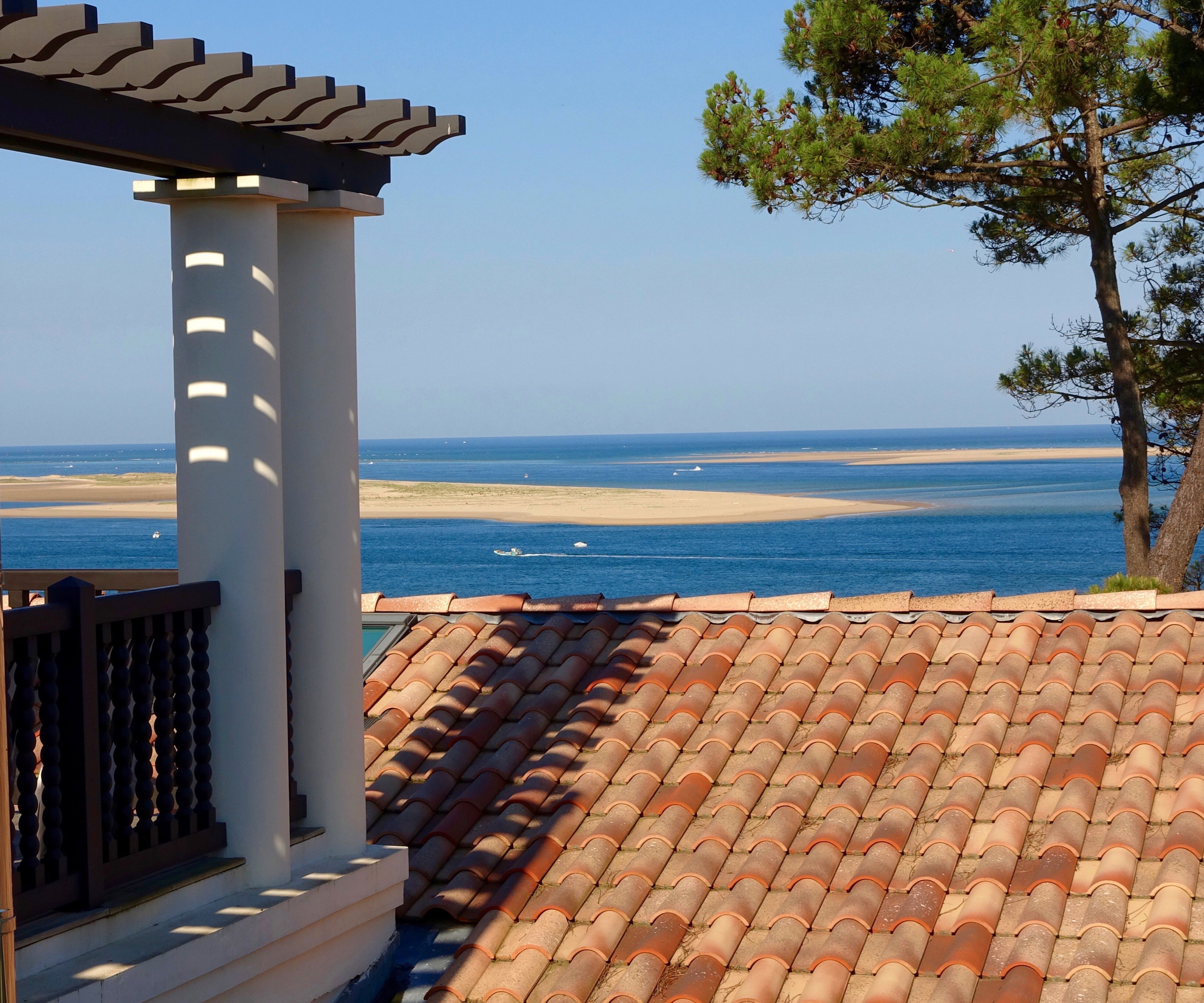 This view….. good god. This is from the Junior Suite

The Restaurant at La Co(o)rniche 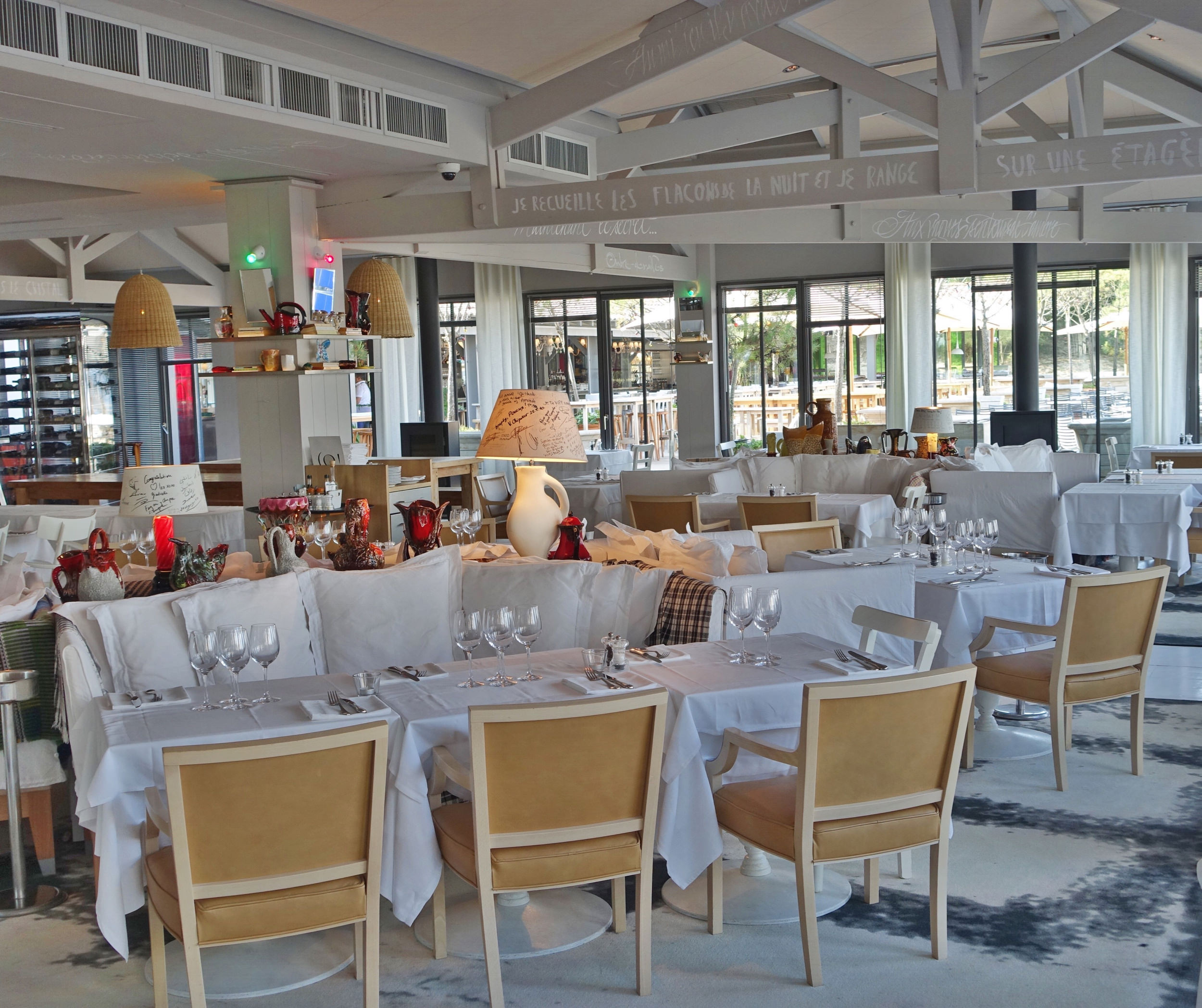 The inside of the restaurant is just as pretty as any restaurant can be. But everyone’s outside. Because, you know, the view and all… I bet this would be just dreamy on a rainy day. . . . 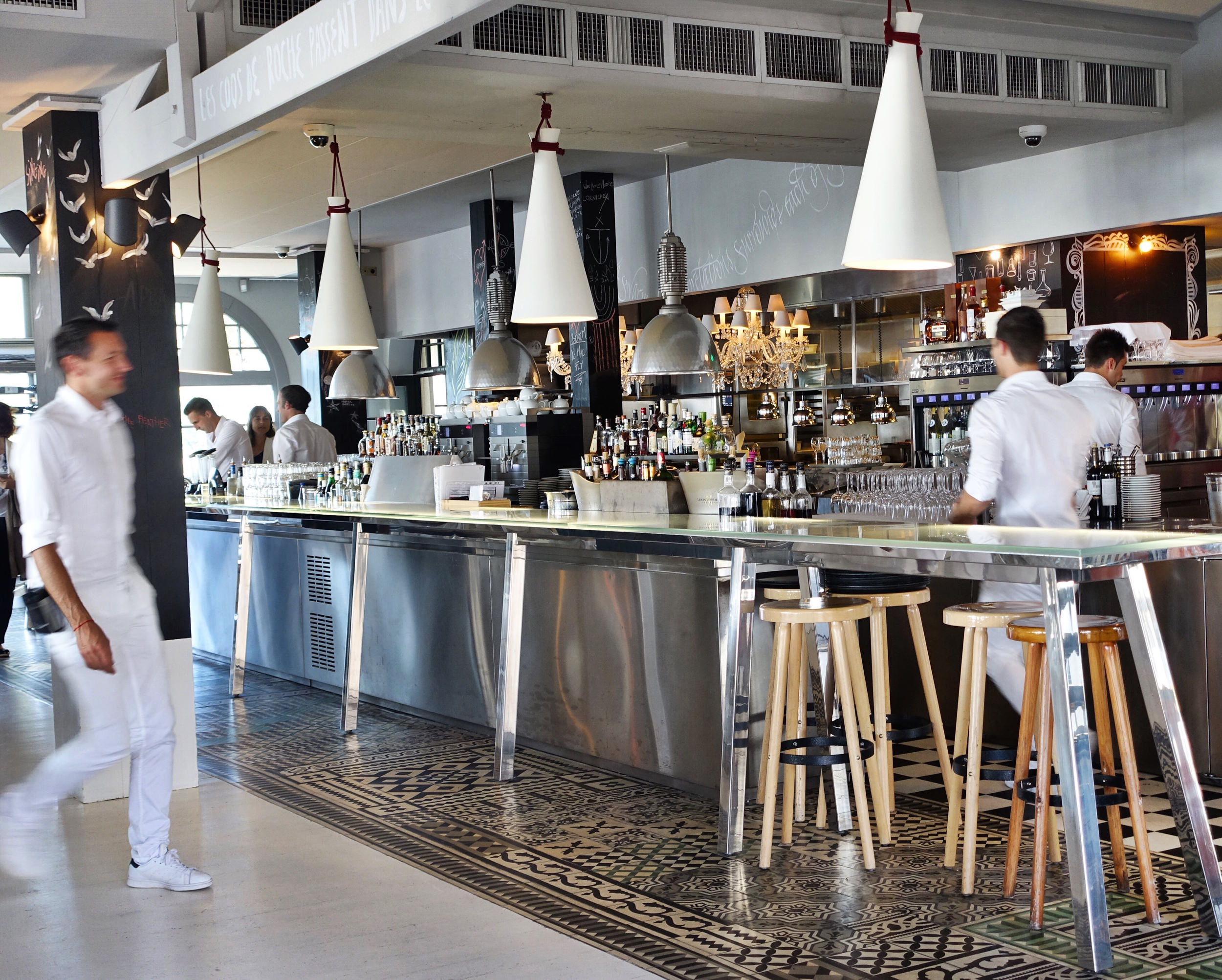 There are no bad view, no bad tables.

Getting ready for dinner. 😳 .

And this is what you eat. 😳

Just the most perfectly grilled fish, ever.

I just crack up whenever I see these sugar packets.

A view into the kitchen 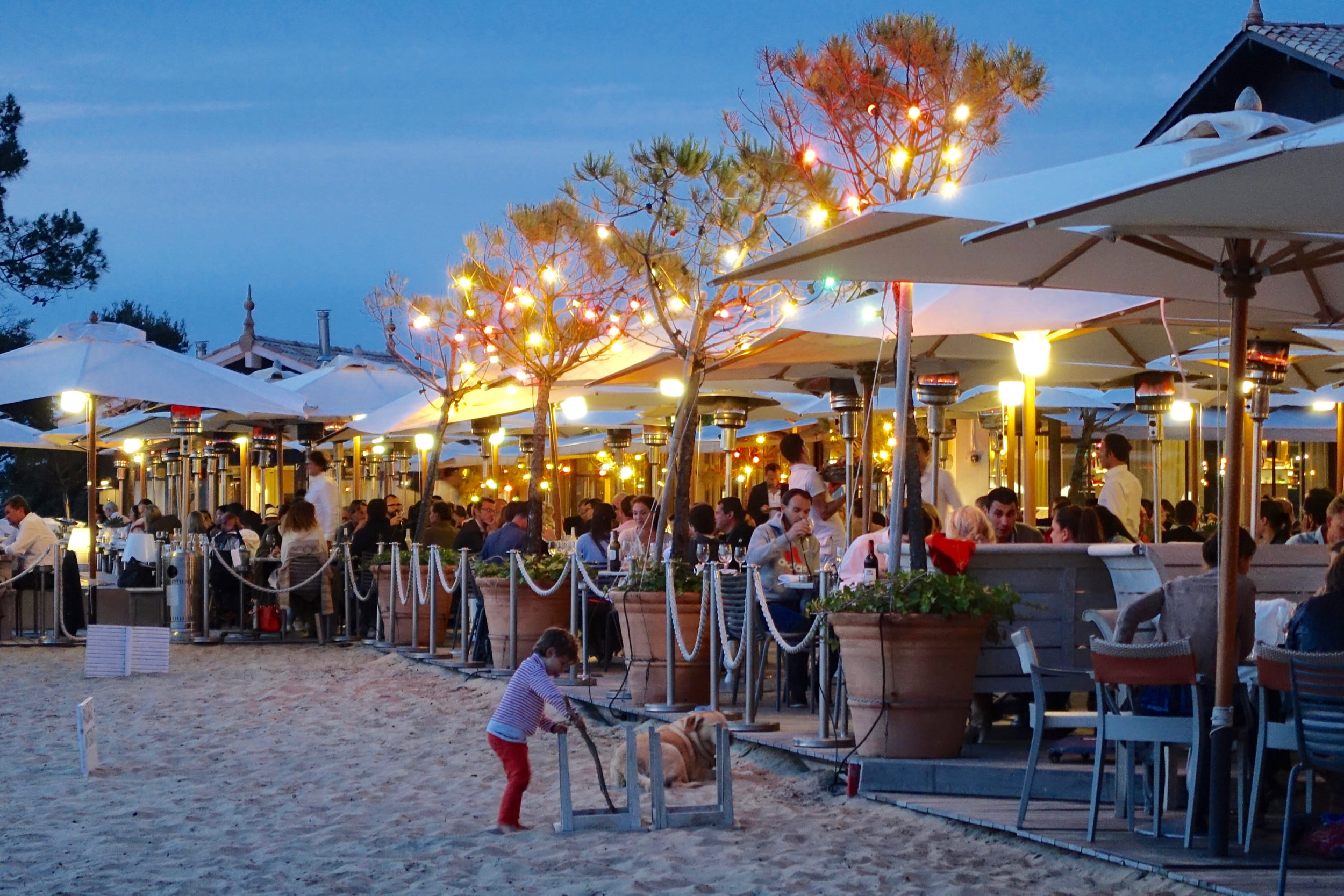 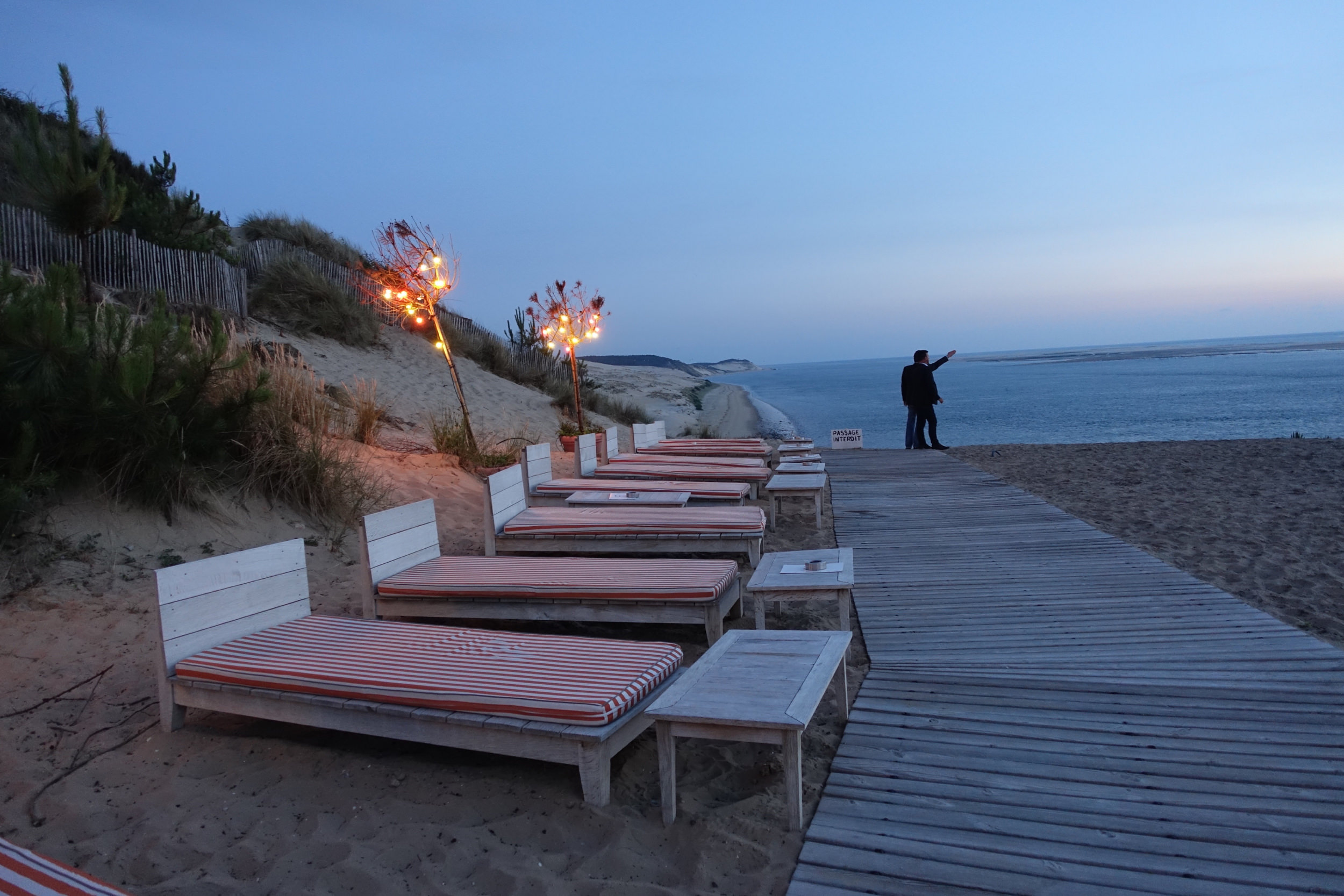 Here’s an article in the Telegraph that calls La Coorniche one of the Top 10 beach hotels in France. In Conde Nast Traveler, which calls it one of the best secret beach hotels. In Trendland. And this is the article in Maisons Côté Sud that brought me here. And a great overview about the area in Travel & Leisure. And this is just a fantastic webpage with extremely helpful facts and information about the Dune du Pilat.

The Bassin d’Arcachon and Cap Ferret are right around the corner and the reason why this seafood hotel is here. NY Times says Cap Ferret is the Cape Cod of France. Here’s a great Cap Ferret guide from the UK’s Conde Nast Traveller. And a great article in Vogue… man, Vogue always seems to have already been to my hideaway places.  And Financial Times has a great article on La Coorniche and the laid back vibe of Cap Ferret. And an article in Forbes on why people are retiring here.