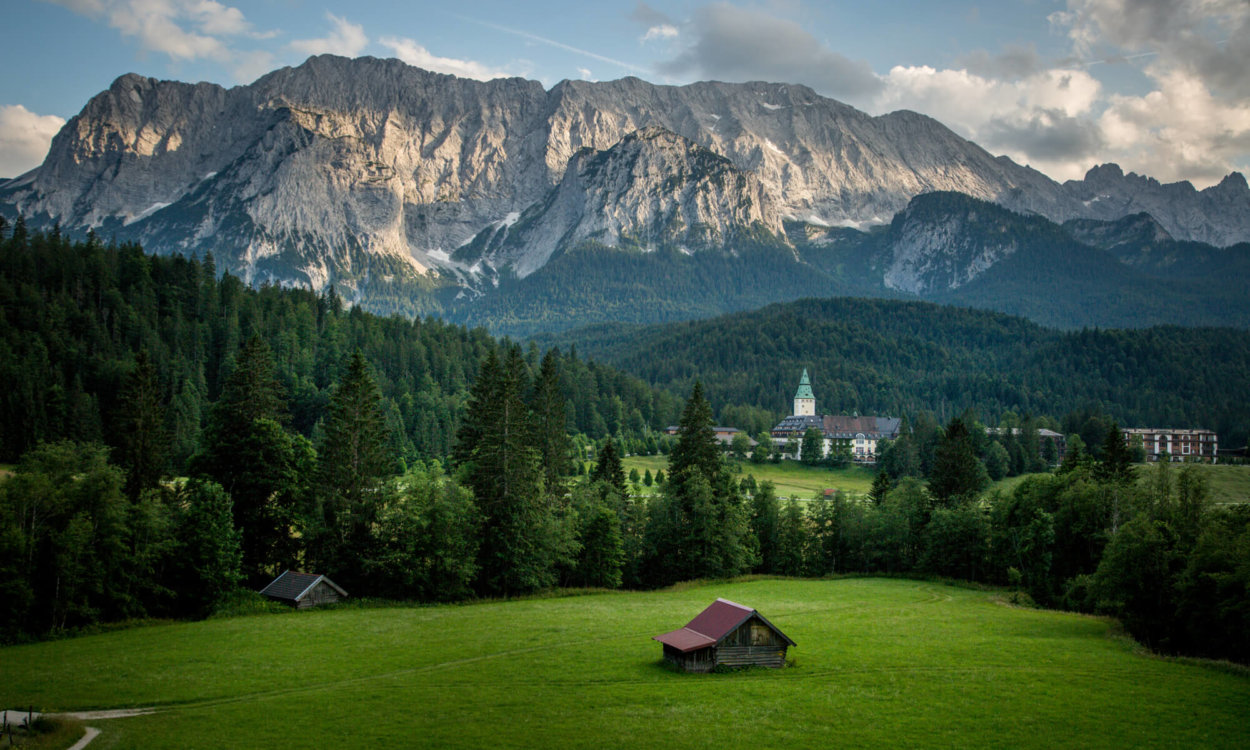 AN IDYLLIC RETREAT IN THE MOUNTAINS OF BAVARIA

[BAVARIAN ALPS, GERMANY] — On my last return trip from Verona to Munich, I remember flying over some killer mountains in Germany, just south of Munich. They were stupendous looking from the air as we headed in for final approach.  “Wow, wonder what those are called…”

This year, I was headed back to the Italian Dolomites and realized that they were only a three hour drive from my Denver>Munich direct flight. I could save a day of travel, an extra flight and just drive directly there. Genius. But, passing through Bavaria, I thought I’d stop and see if I could find those mountains I saw before.  I did.

Even better, I found this stunning hotel location. Schloss Elmau.

I was researching cool places to stay in the Garmish-Partenkirchen region. But when I saw this view I was like dingdingding. 🛎🛎🛎  So easy to get to, just hop off my easy flight and two hours later and I was rollin’ up to this joint like Flavor Flav…big clock tickin’⏰…

Something seemed vaguely familiar to me about this view, was it a fairytale book cover? Then I read some more and remembered they had the G7 here in Olden Times…way back in 2015… and I remembered all those pictures of he and Angela giggling around in the wildflowers with all the other world leaders.

But I had no idea how towering and impressive the Wetterstein Mountains are. I always pictured Bavaria as densely wooded rolling hills and gentle mountains. Wasn’t expecting these enormous shark teeth sticking out like a Freddy Mercury smile (“..’ees got faaangs now, doesn’t ‘ee?)

Big grand luxe places like these are really not my thing, but in a setting like this, how could you beat it? I pressed 🔘. 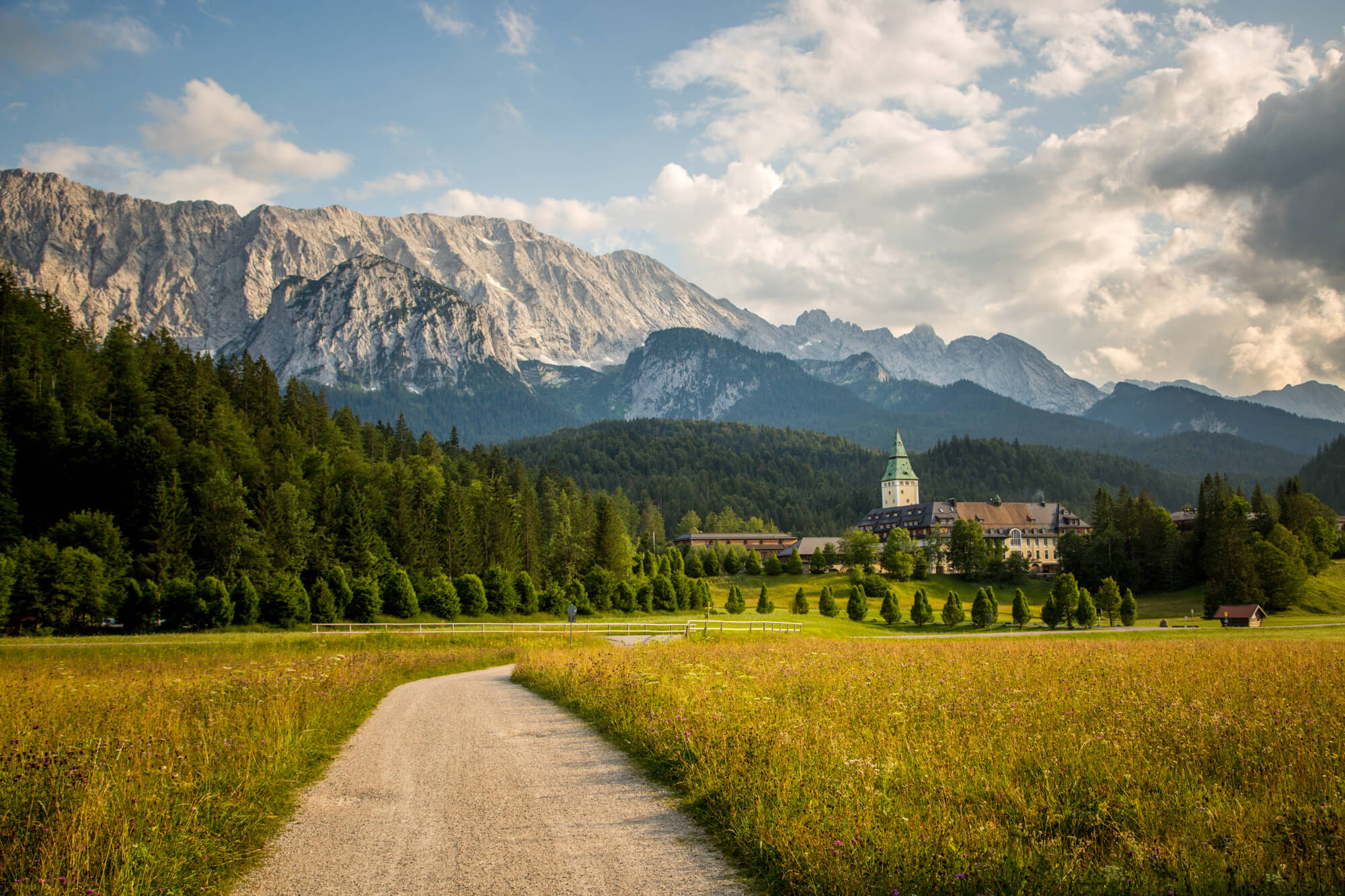 The hotel is set inside a park preserve, in fact you have to pay to get into the park, then drive a bit before opening onto this stunning location. 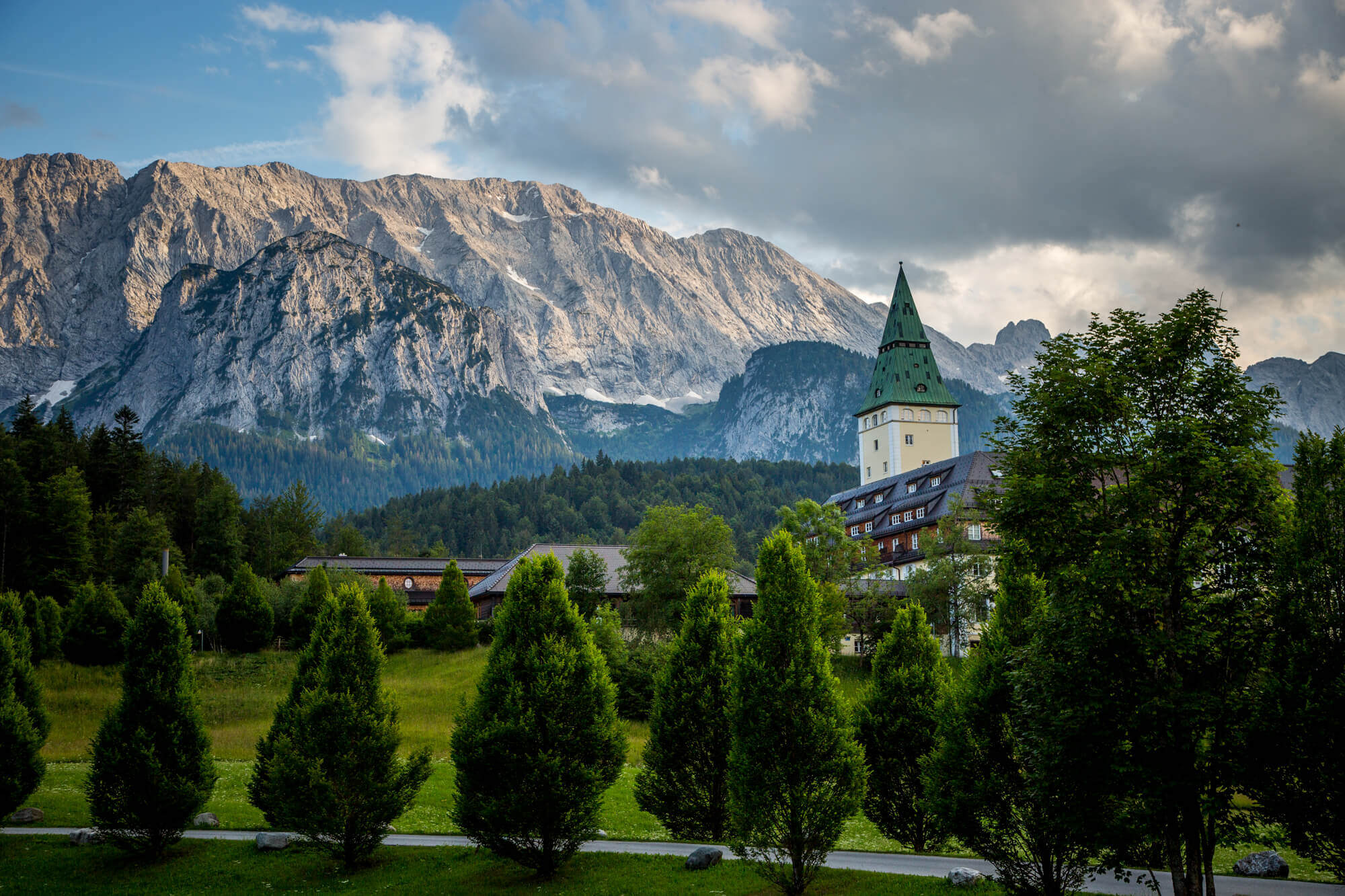 Just about 20 minutes outside the cute and popular ski town of Garmisch–Partenkirchen, the hotel calls itself a cultural retreat and hosts musicians for free, who then perform in the acoustically perfect musical theater. There are multiple spas, pools, a dozen restaurants — more on that later — and hundred of acres to hike and drink in the mountain views.  The front deskman confidently said “I see your request for a room with a great view… that’s easy because all the rooms have views.” 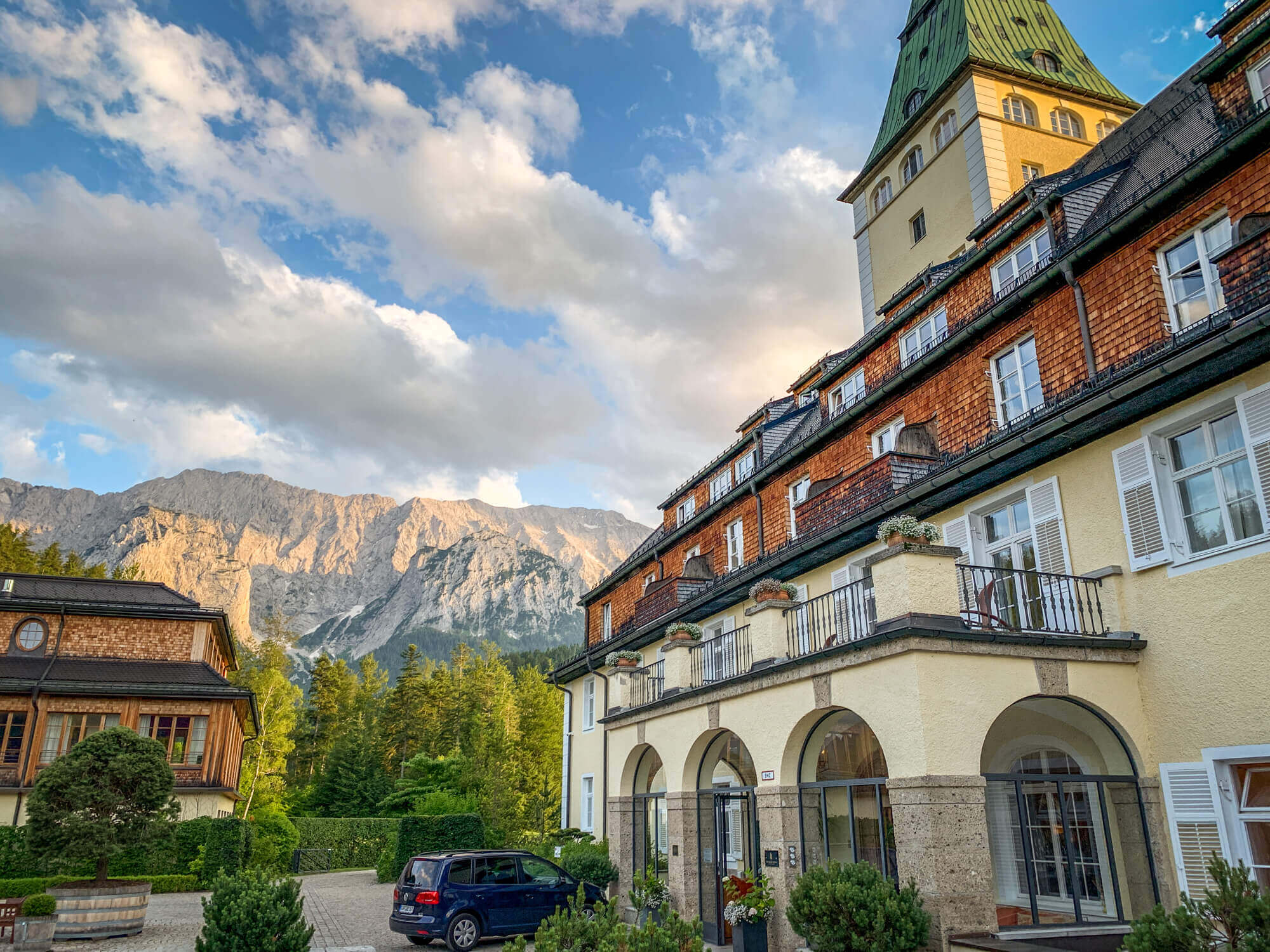 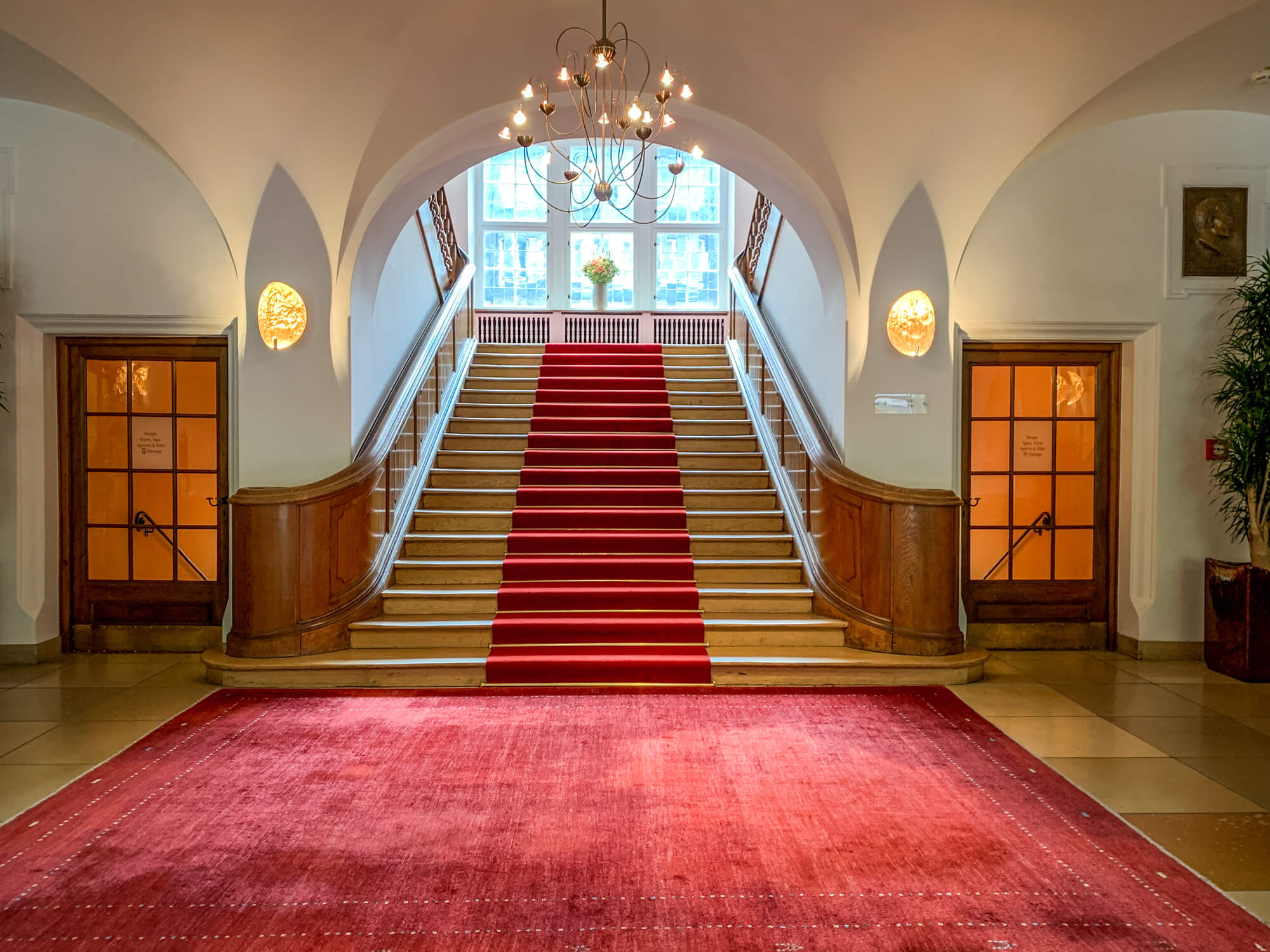 There’s a half dozen “Accidentally Wes Anderson” looking scenes throughout the hotel. This was an old castle, but it burnt down in 2005 and the owner rebuilt this from scratch. You can hardly tell what’s old and what’s new.

The first thing you notice upon pulling up to reception.

the hotel was made famous when the G7 was held here, with Pete Souza’s famous photo of Angela and Obama.

There are cozy areas all throughout the hotel, all with the custom fabric designed for the hotel that gives Old World charm to a new building.

The hotel opens out to a large terrace, where everybody can get a Negroni in the sun and watch the mountains light up with golden glow.

Maybe it was because I was there on a Sunday and Monday, but the service was terribly slow and understaffed and took forever to flag down, if not tackle, a waiter to get a drink.

It was maddening to sit out here in this perfect sunset and take 40 minutes to get a drink, missing the whole part of the show.

There are seating areas all around the grounds.

There is a Michelin starred restaurant on the grounds, but they leave no room for guests, or mention pre-booking. So didn’t get to eat there. They do have a nice breakfast though.

Had some real issues finding a nice place to eat in this gorgeous setting. Supposedly they have “a dozen or more” restaurants on-site, but perhaps it was because I was there on a Sunday and Monday, but the only options I was told both nights was the buffet-only dining room, loaded with kids and families. They have a Michelin starred restaurant, but it was “I’m sorry, fully booked.”  Is there another restaurant where I can get a la carte menu and not buffet?” ” Oh yes, we have over a dozen restaurants and it areas. But I’m sorry, they are all fully booked.”  Grrrrrrrrrrrr.  Never have faced such a language barrier in Germany.  Soooo, note to self: book restaurants before you arrive.

One night I was there, there was a big concert recital, from a classical musician I’d never heard of, but the place was packed. They bring in classical, jazz and host cultural talks with qualified speakers.

The hotel is also known for its huge spa program — the best luxury spa in Bavaria — and they have one of the biggest hammans west of Istanbul. My stay was short, so didn’t have time to partake. 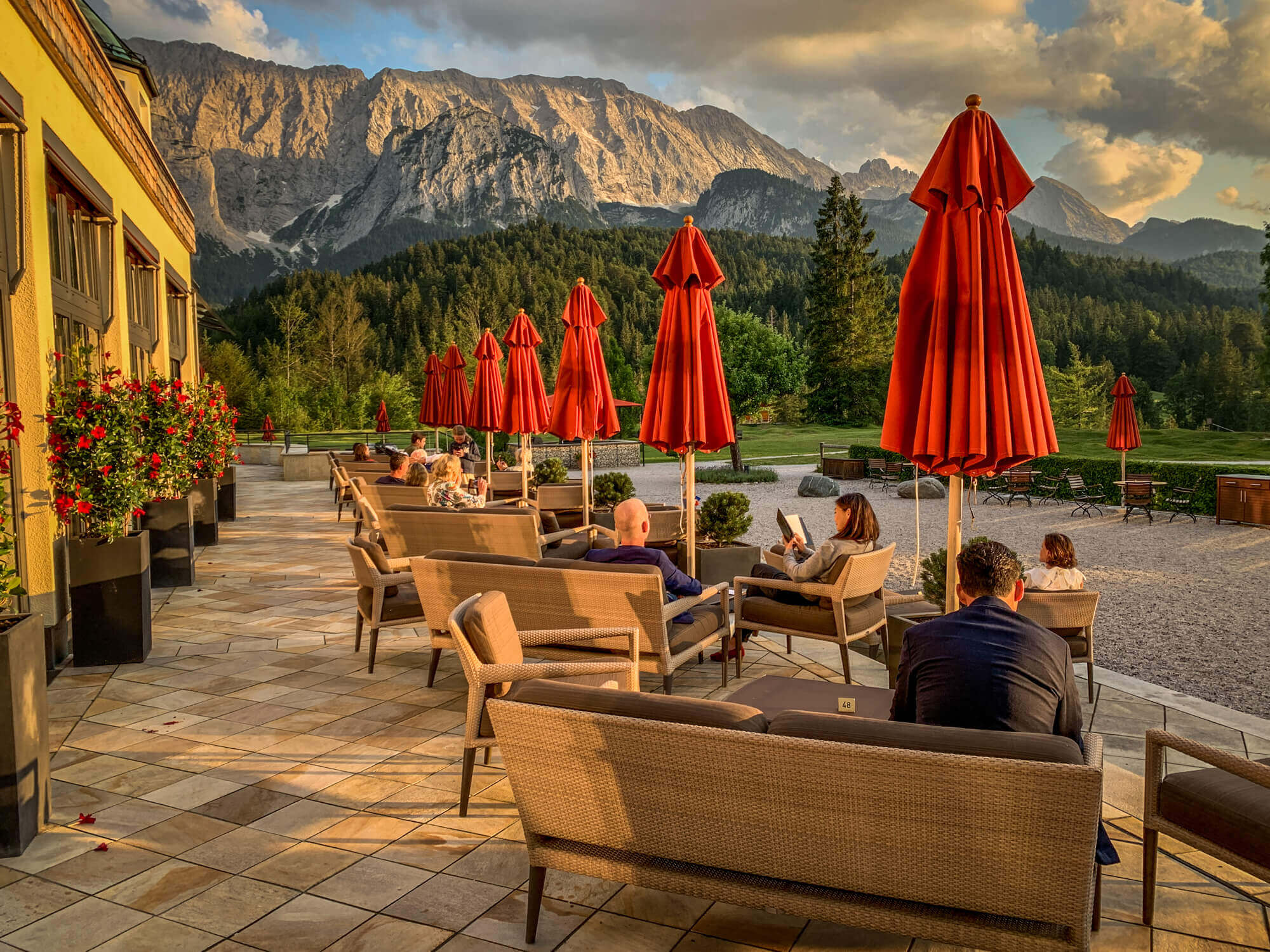 Stunning place to have a cocktail and watch the sunset. But as you’ll notice, everyone has numbers on their tables but nobody has anything to drink. The hotel was severely understaffed. It took forever to flag down and tackle a waiter both nights. This should not happen at a five star hotel. 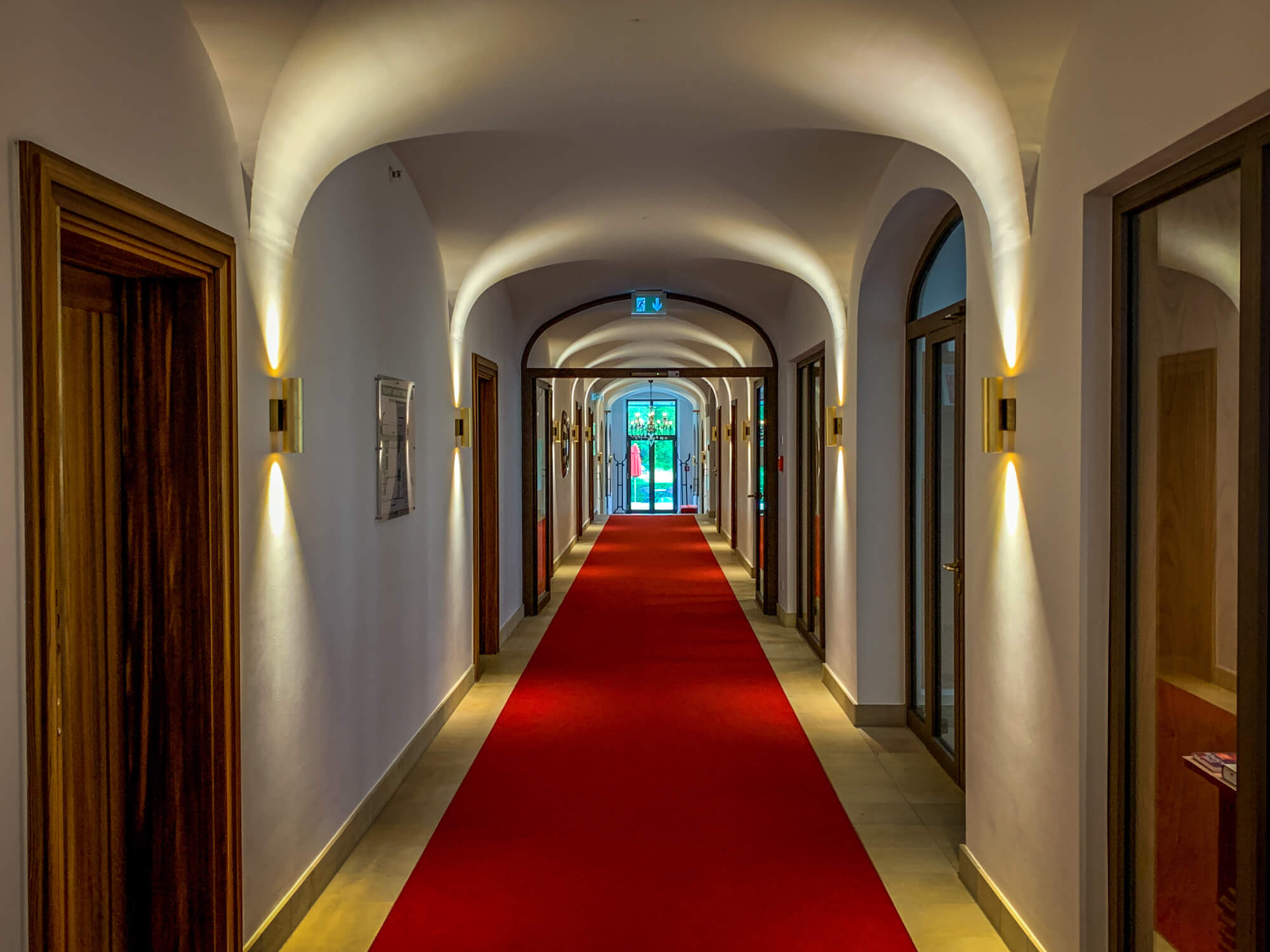 Take a Hike Around the Grounds 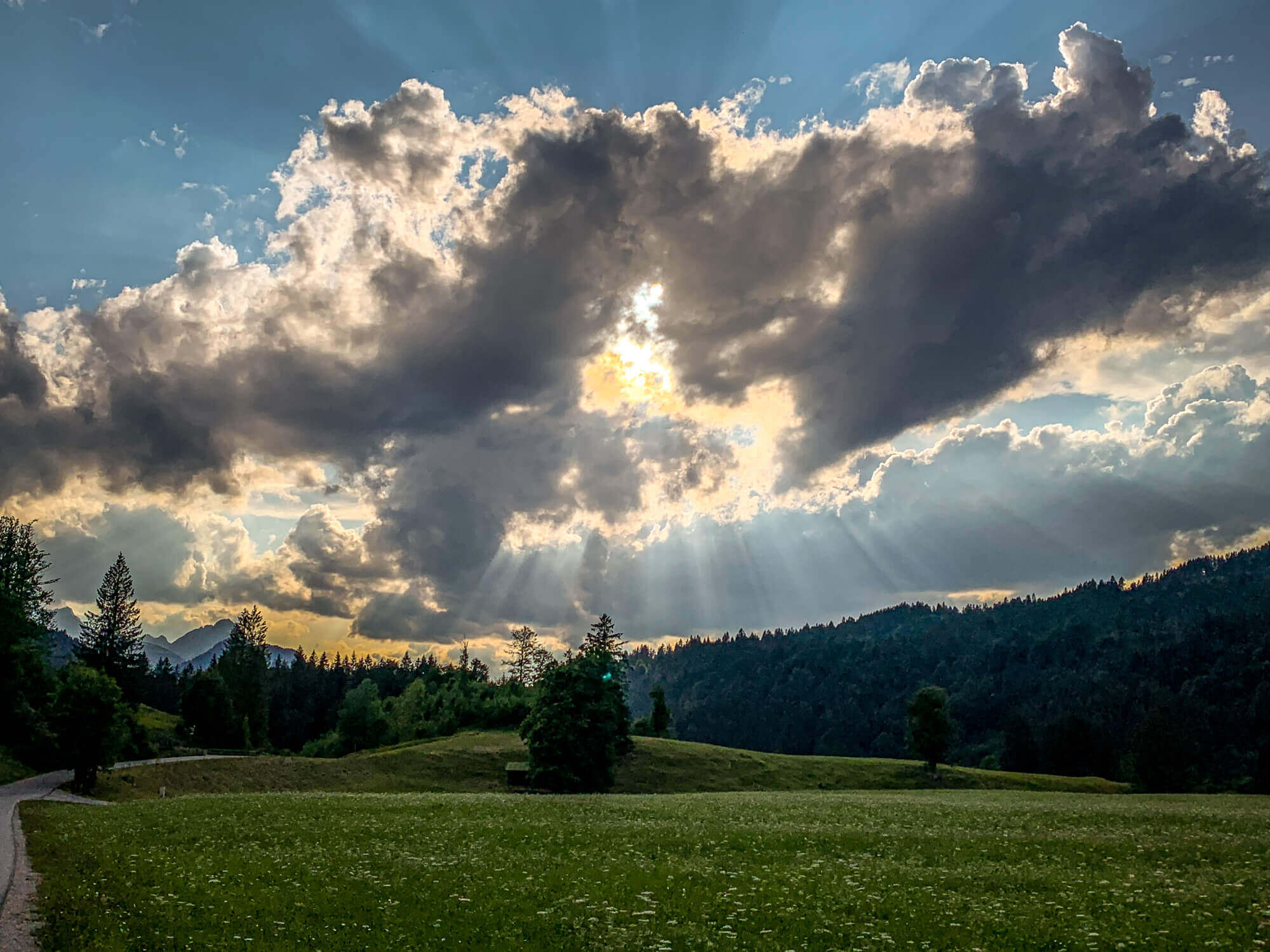 The best part about hotel are the well-marked trails that lead off into all directions of this nature park. Acres and acres of wildflowers that you just want to run through. Which is funny, because when you see commercials with couples running through flowery fields it looks great. But the reality I found is all those flowers attract bees. THOUSANDS OF THEM. And every other stinging insect. And the flowers, loaded with thorns and burrs! 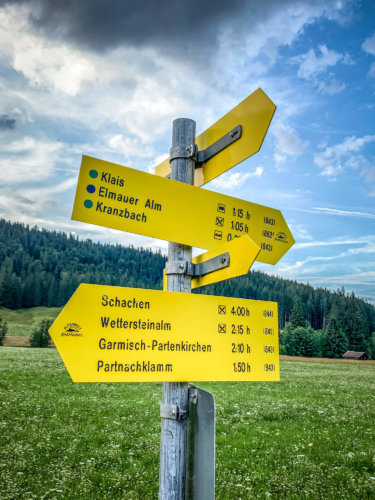 Itching to get hike, I just took off up a trail in search of a hut called Elmauer Alm. I knew little about it, but after about an hour uphill, threading between the rich green trees and farm families all out chopping hay in high meadows, you come across here: 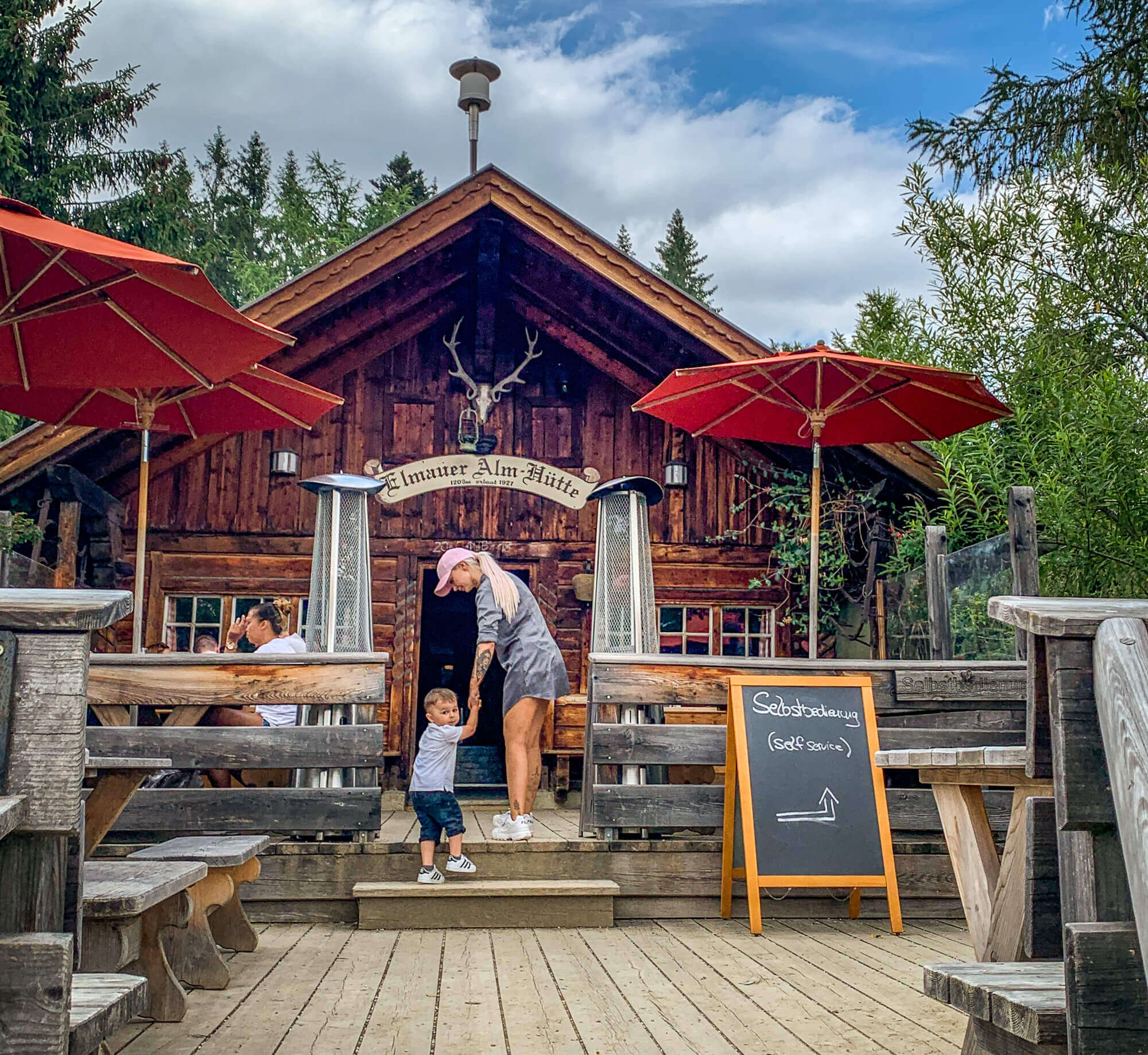 The Elmauer Alm is about an hour hike up a hill, not too strenuous. It’s owned by the hotel and is picture perfect, good German food, a cold beer and views for days.

The food was perfect, the beer even better. The views, in all directions.

Even the pines were perfect.

The best view of the hotel is on the trail up to Elmauer Alm. Time it for the end of day, when even the sun can sneak out below the cloud cover for a light show. 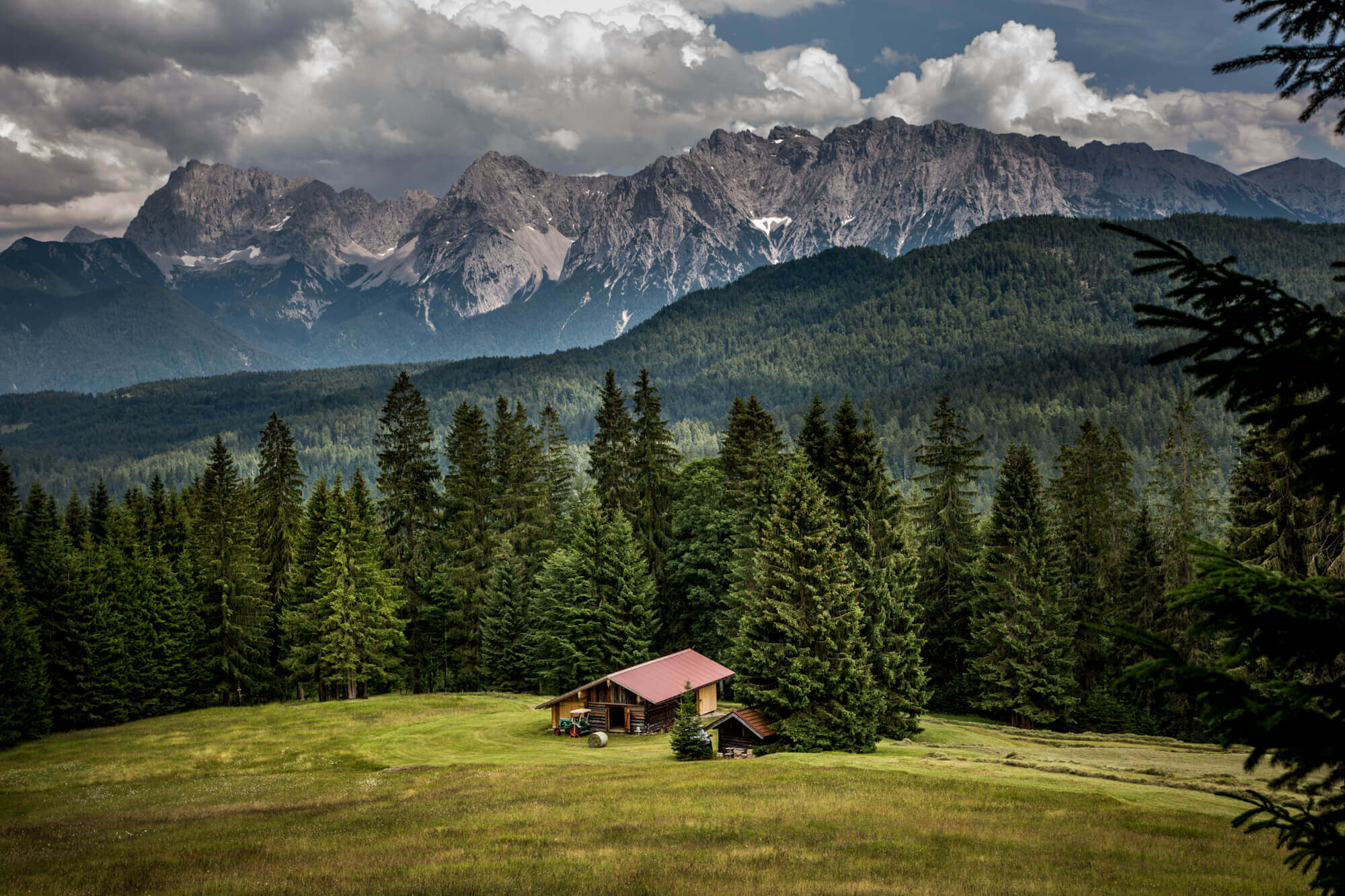 I watched as a whole family below was out pulling in their hay before the fall set in. 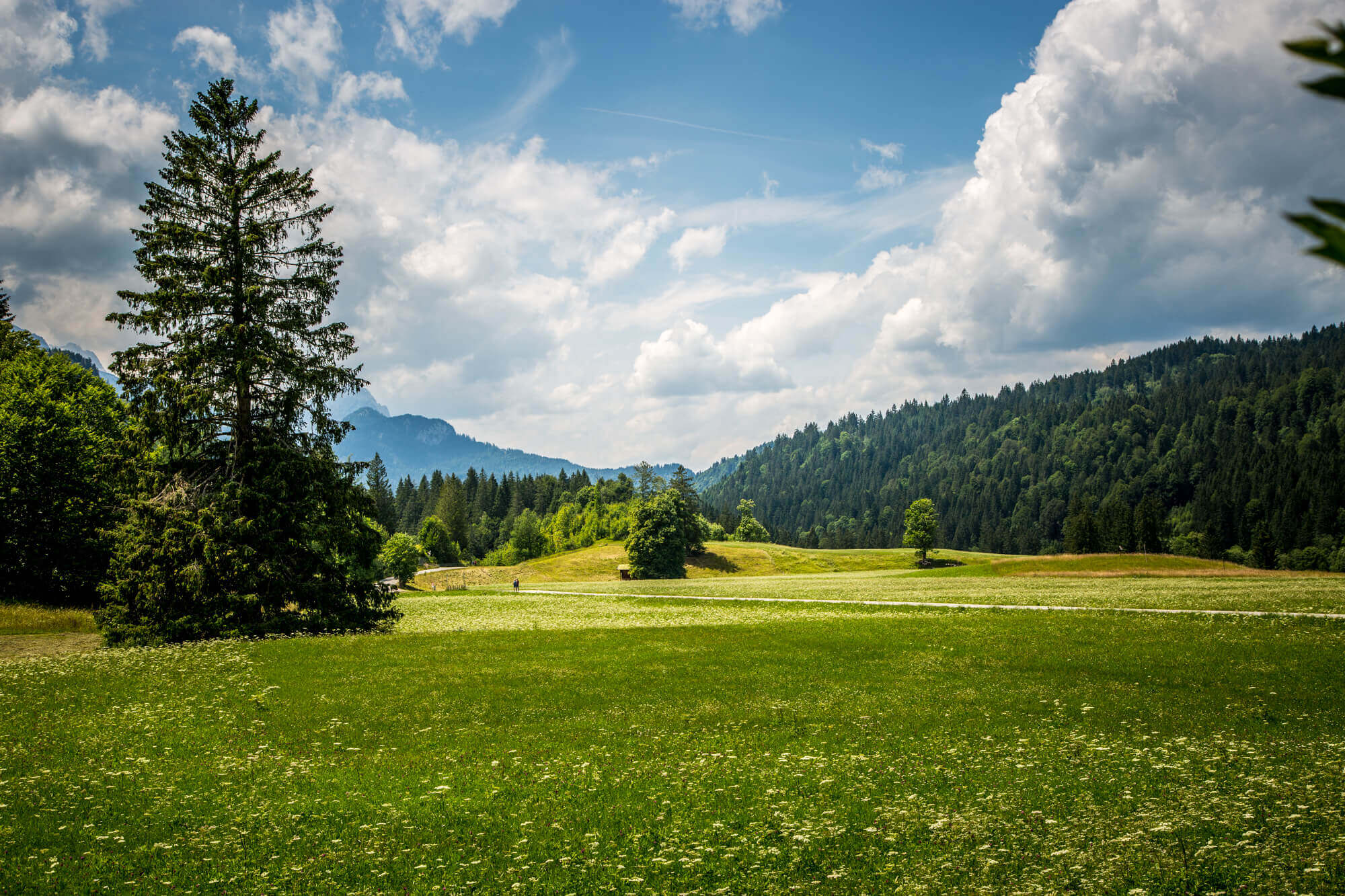 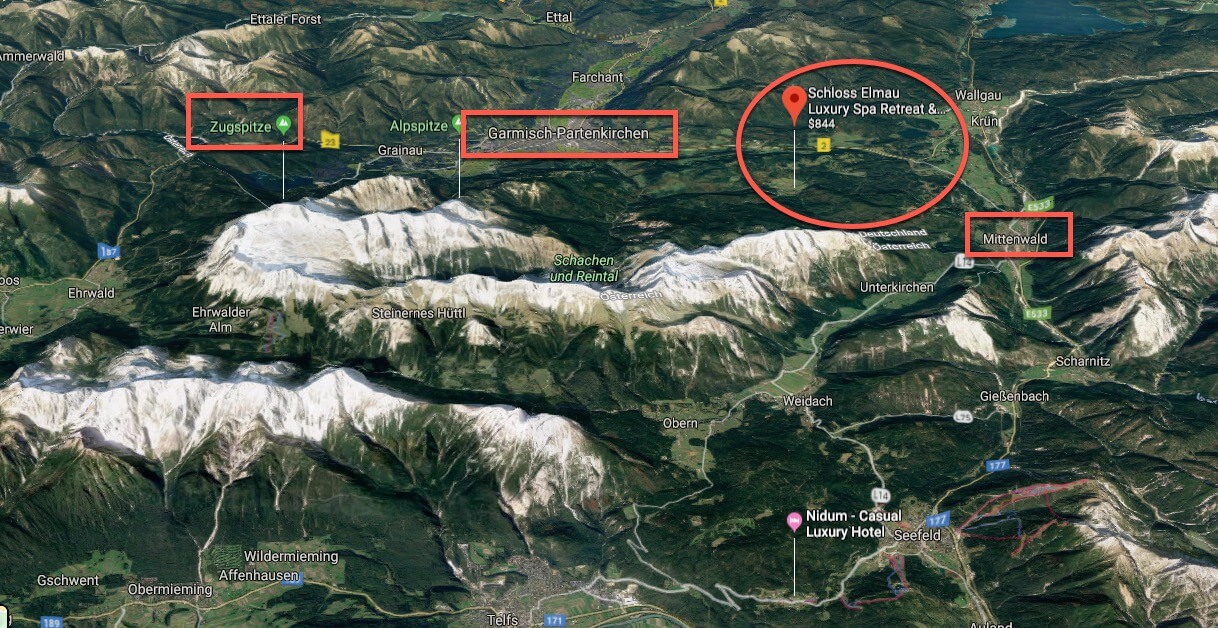 Schloss Elmau is about 20 minutes outside the popular ski resort town of Garmisch-Partenkirchen, on the road before Mittenwald before it dips into Austria. Innsbruck is about 100km away. 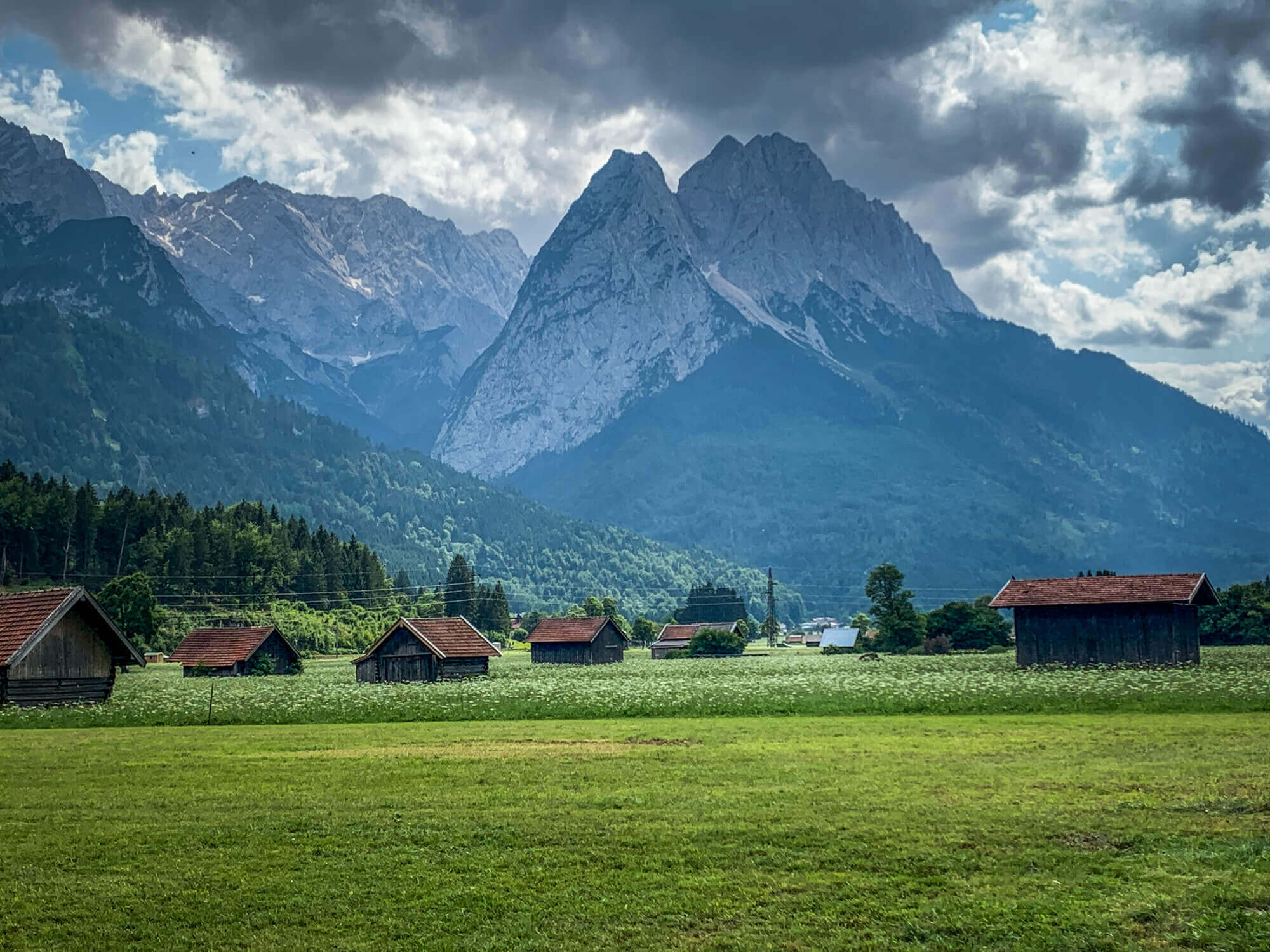 The resort is about 20 mins from the popular ski resort town of Garmisch-Partenkirchen. And the Zugspitze — Germany’s tallest mountain and the one I saw from the plane. 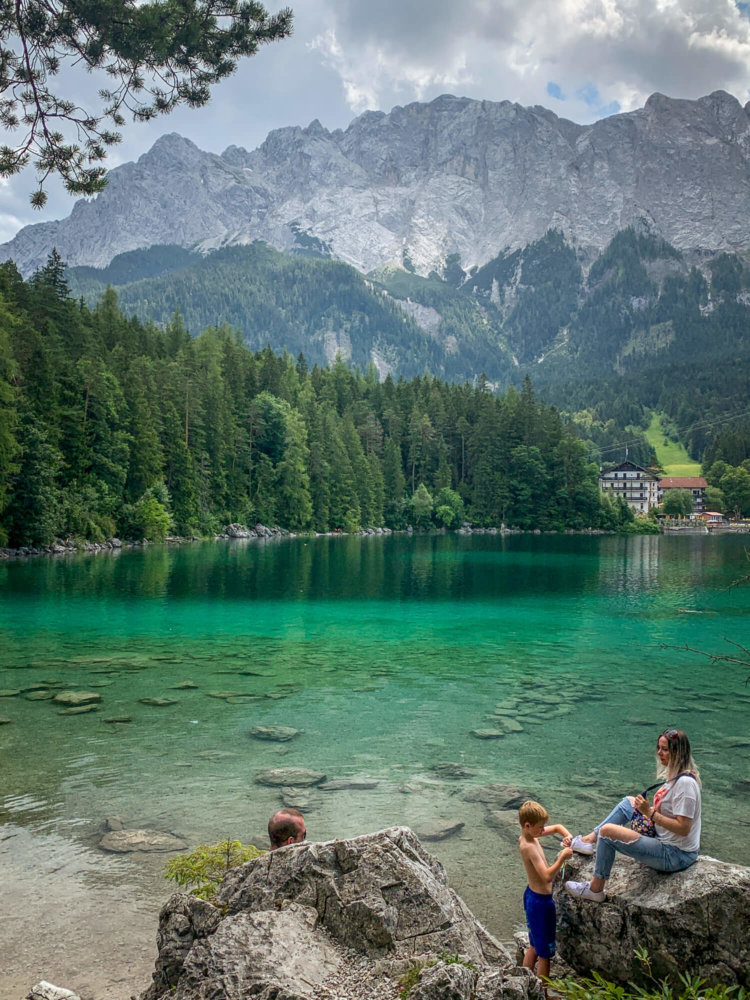 A definite must is to drive past Garmisch and the Zugspitze and hike around the incredible lake Eibsee. That’s a perfect half day hike. I’ll have another post on that. 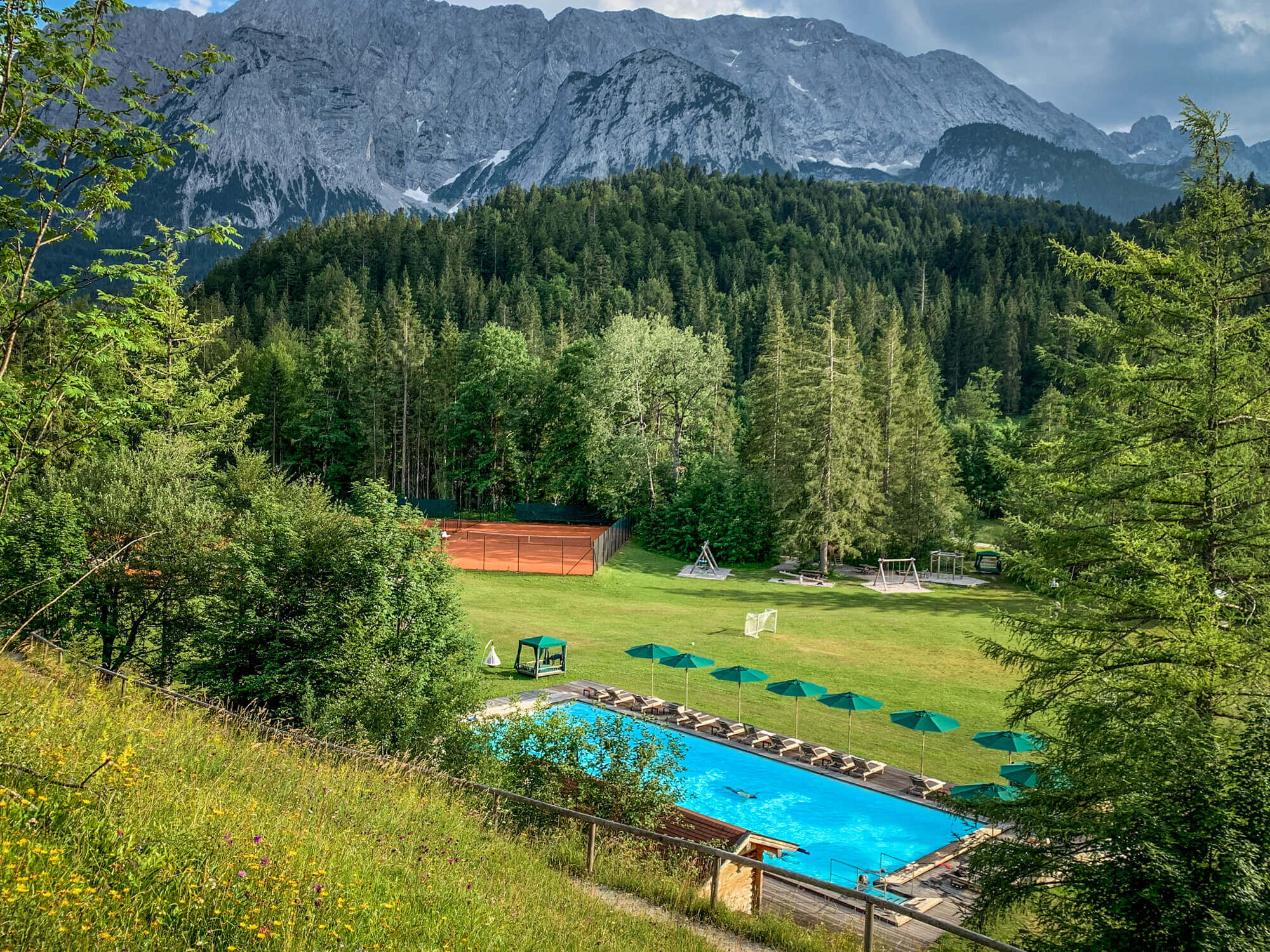 There are several pools throughout the grounds, on the rooftop and in the spa. My favorite was this little spa area nestled in the woods.

Room With a View 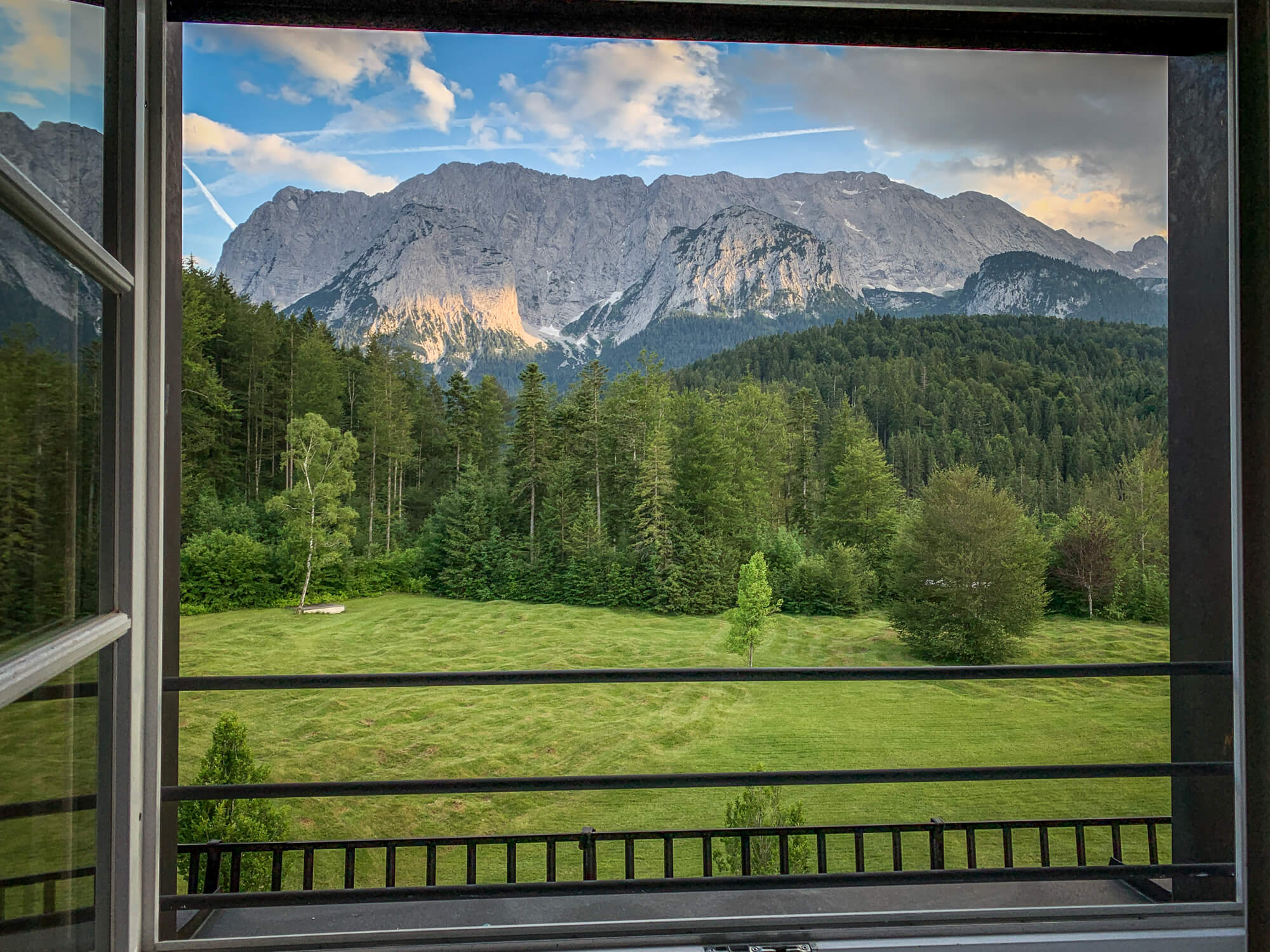 This view from my room was incredible. I was up in the eaves of the roof, but still had this drop dead gorgeous view. 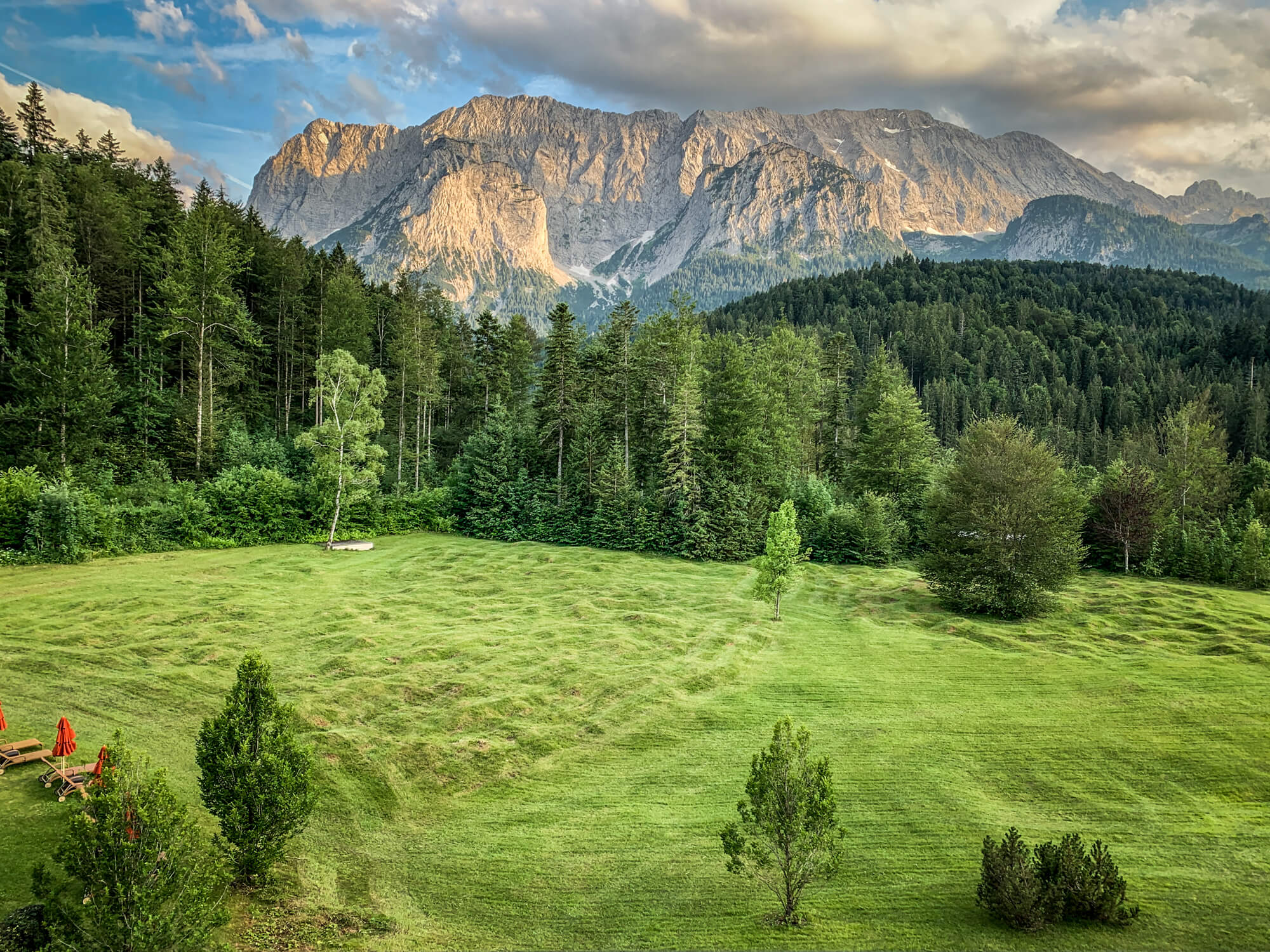 Here’s the view when you poke your head out… 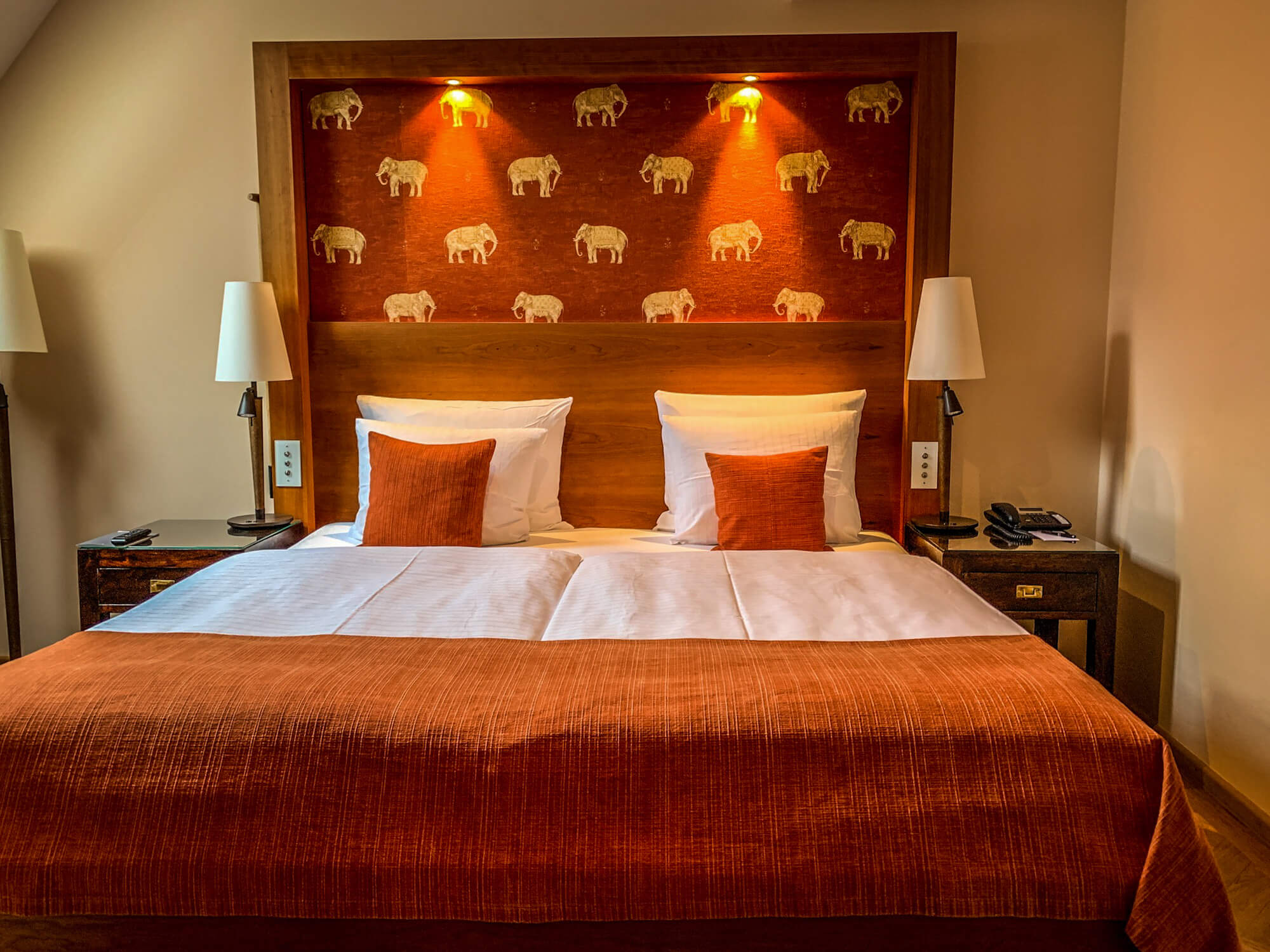 I fell in love with the hotel’s custom fabrics throughout the whole place. Just a little bit exotic, warm and good to the touch. Another Accidentally Wes Anderson moment. I can see Jason Schwartzman in velvet pajamas sitting right there.

My room had the best little sitting room, with full desk and a couch perched for the best views.

I mean, here’s an example of things were just a little off in this place. Very confusing to work your way around the hotel, with stairways not connecting to other wings, or like your room numbering system not lining up with the elevator floor numbers, so you have to read the fine print to figure out what floor your room is on… for example: I was in a 400 room, which was not on 4 but on 3rd floor. And SOME of the 500 rooms are on 4 and some on 3. It’s crazy-making!

There’s a separate, newer building that is all suites, perfect for families. Supposedly there are some restaurants inside here, too. But I couldn’t get a table. Fully booked in advance. 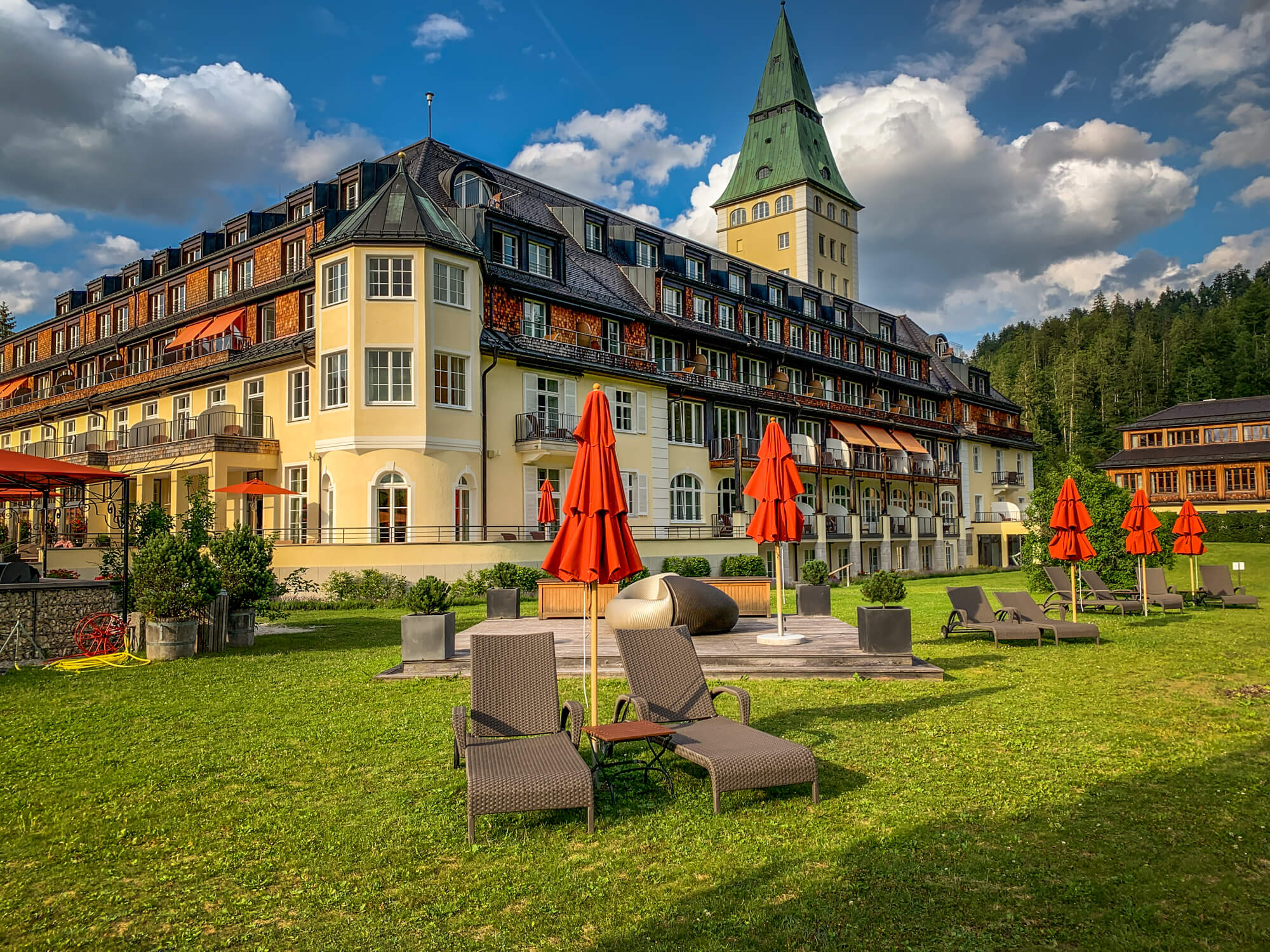 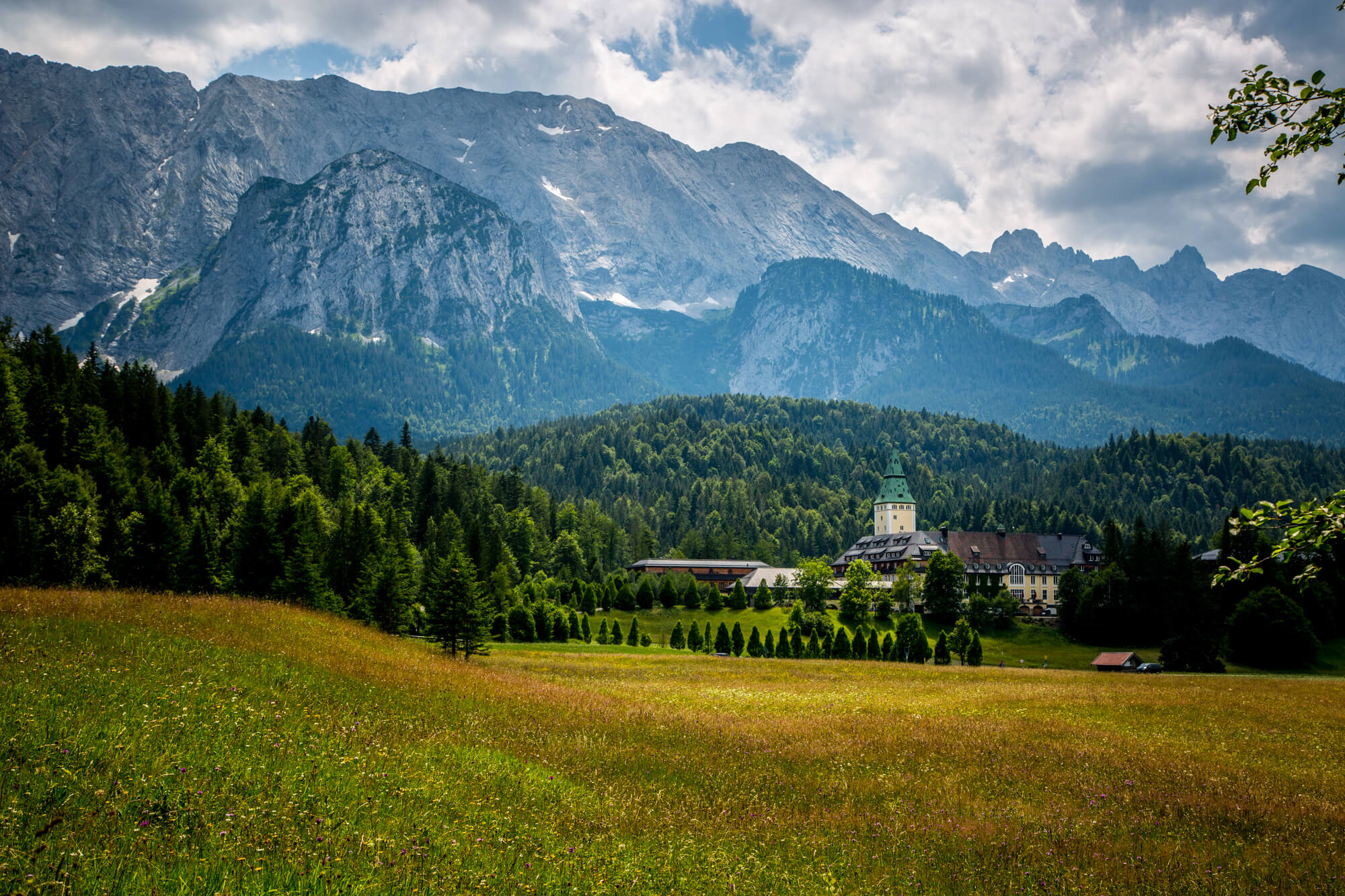 Here’s a 9/10 review from The Telegraph. Here is the listing in Tablet Hotels that won me over. And a great review from Forbes. A really good article in the Financial Times How to Spend It magazine. The Hideaway Report.  If you’re overnighting in Munich, here’s a post I did on what to do there.

Just few kilometers away, I drove by this very cool place that looked even cooler than Schloss Elmau, sitting high up on a plateau overlooking the Wetter-stein mountains.

Continue reading...
5 Discussions on
“AN IDYLLIC RETREAT IN THE MOUNTAINS OF BAVARIA”